The deck I played in the SSL was just two cards off the G/B deck I proposed in my article last week as a potential foil for Esper Dragons. In the place
of two Heir of the Wilds in the original list, I played two copies of Herald of Torment. My thought was that I wanted some amount of evasion, which Herald
helps provide since this deck can sometimes need some help breaking through a stalled board. Den Protector’s pseudo-evasion works well combined with Boon
Satyr (or Herald, for that matter), but Herald can let any of your creatures take to the air to help finish your opponent off.

The idea behind the deck is to take advantage of the synergy between Deathmist Raptor and Den Protector to present a powerful, difficult-to-stop offense
supported by removal and disruption that also happen to pair well with Den Protector. I’d made an initial sketch of the deck while preparing for the Pro
Tour, but I never really got around to testing it enough to bring myself to play it in the tournament. I had something of a crisis of confidence in my G/W
deck’s ability to handle sideboard cards like Hornet Nest the day before the PT, and I nearly audibled to playing my untested G/B deck. Ultimately, I
stayed the course – only to go 1-5 in Standard at the Pro Tour and wish that maybe I had made that last minute swap.

After playing some more with the deck, including my Standard Super League matches, where I finished 1-1, beating Brad Nelson’s Bant Heroic deck, but losing
to Gerry Thompson’s Sultai Reanimator deck, I had a few more thoughts on the deck and some changes I wanted to try.

Warden of the First Tree was disappointing. Warden was pretty good in the G/W deck in part because of Valorous Stance and Dromoka’s Command to protect him
from removal, but in this deck, I found that he often didn’t survive long enough to justify the mana investment. You can use Thoughtseize to take removal
spells, but it takes so long to level up a Warden that your opponent will often have windows to draw another way to kill it. Additionally, Warden and
Rakshasa Deathdealer are often competing for mana at the same points on the curve, which can make a lot of the middle turns of the game awkward. I was
already down to three Wardens from the four that I started with, and I could easily see cutting even more.

Surrak was also relatively unimpressive. He’s great at punishing opponents who aren’t putting up very much resistance, and he’s fantastic as a follow up to
some kind of board sweeper when paired with an end of turn Boon Satyr. That said, four is a lot of mana to pay for something that dies to Stoke the Flames
and can’t attack through Siege Rhino. With Thoughtseize and Hero’s Downfall as relatively universal answers along with Den Protector and Deathmist Raptor
for recursive threats, this deck has the tools to play a longer, grindier style of game that Surrak doesn’t really fit.

On the subject of grindy games, I’ve been more and more impressed by Collected Company. In my videos last week, I experimented with sideboarding in Collected
Company against aggressive red decks, both as a way to keep removal spells open on my opponent’s turn as well as to help play around can’t block effects
like Goblin Heelcutter. It also just so happens that Collected Company is downright fantastic against Esper Dragons, which is one of the most popular and
powerful decks in the metagame, which is all the more reason to go out of our way to help support it. 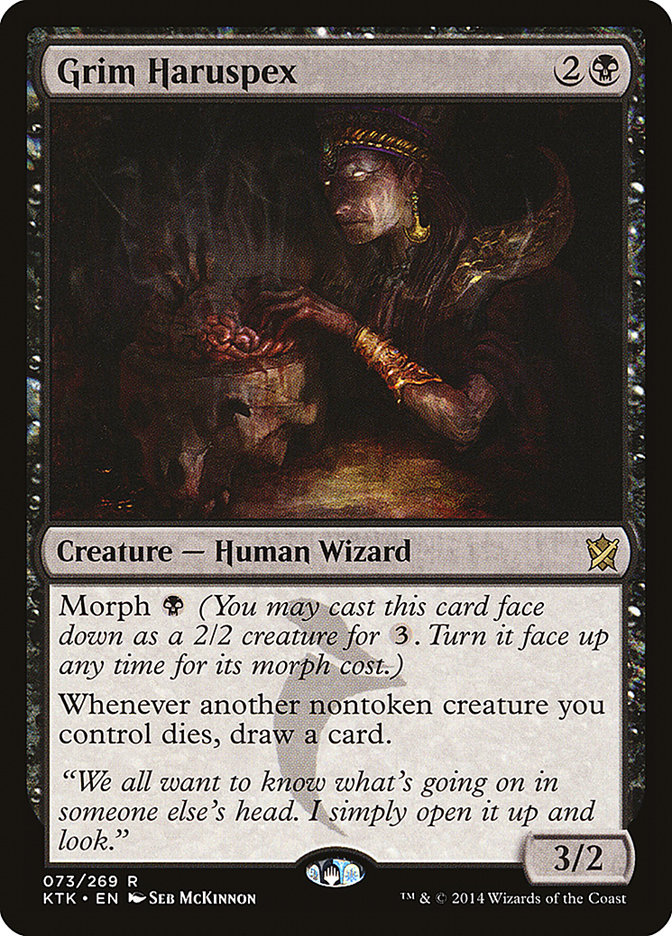 I also recently became aware of a morph creature that I hadn’t even thought of playing before that fits right into this somewhat grindier gameplan. When I
saw a Grim Haruspex on a Regional PTQ decklist this past weekend, I was somewhat shocked that I hadn’t come across it in my pre-Pro Tour scouring of
Standard legal cards for my deck. Then I realized that I never did a search of black morphs since I’d moved on to G/W before I started really digging deep,
but I still felt a little foolish for never thinking of it.

I’m not sure just how good Grim Haruspex is, but it does a lot of things that this deck wants. First of all, it’s a morph, which obviously means that it
works very well with Deathmist Raptor. But the fact that it is a morph that flips up for just one mana makes it especially appealing. Some of my earliest
Deathmist Raptor decks had Ire Shaman in them for exactly that reason, and there were points that we were even experimenting with Temur Charger to trigger
Raptor for free. Not only do you gain the ability to get Raptors back faster and cheaper than you otherwise could, but you’re also able to surprise your
opponent by bringing them back when they don’t expect it.

By now, everyone is used to seeing a morph with two open mana and anticipating Den Protector, so they know to play around the possibility of a Raptor
coming back from the graveyard. But with just a Swamp untapped? Lots of opponents will attack into that with impunity – letting you flip up your Haruspex,
return your Raptor, and block to kill their creature – and possibly draw a card off of the Haruspex’s ability!

Even outside of trickery and subterfuge, Haruspex can help keep your card flow up when you’re in a tight spot. Often, this deck finds itself racing with
evasive creatures like Den Protector or Herald of Torment while chump blocking on the ground with Elvish Mystics, and having Grim Haruspex around helps you
get some small value back for the sacrifice your Elves make. Haruspex helps you reload after board wipes with a fresh grip, or even just puts your opponent
in the squeeze when they have to choose between using a removal spell on a key attacker and letting you draw, or the Haruspex and risking more damage
coming through.

Here’s the next version of the deck that I want to try:

With the removal of Surrak, every single creature in this deck is a hit for Collected Company, which means you’re a massive favorite to hit at least one
creature with it, and have a very good chance of hitting two or more. While not all of your creatures are especially exciting hits, you have the dynamic
duo of bestow creatures to turn anything into a meaningful threat, along with Rakshasa Deathdealer, which only grows in power as the game goes on.

Other than the Surrak/Company swap and the addition of Haruspex over two Warden of the First Tree – which, as I mentioned, is very much an experimental
change, but one that I’m excited to try – the other big change is in the sideboard. While I very much like both Dark Betrayal and Hunt the Hunter as
sideboard options, they’re both mostly aimed at the same matchup: Abzan Aggro. Hunt the Hunter has applications elsewhere, like against Green Devotion to
fight Elves, but it loses a lot of its early mana creature killing power when you cut down on the number of one-drops in the deck by removing Warden.

Both Hunt the Hunter and Dark Betrayal can line up poorly against the wrong opposing threats from Abzan Aggro, like drawing Hunt the Hunter against Brimaz
or Dark Betrayal against Fleecemane Lion. In a matchup that is so much about tempo, you don’t want to be in a position where you have the wrong answer on
an early turn and nothing to do as a result. And with the life loss of Self-Inflicted Wound recurring through Den Protector, you can really punish them for
all of their painlands. Self-Inflicted Wound also happens to double as a removal spell against Heroic that they can’t prevent with Gods Willing, which is a
nice bonus, especially in the wake of Ross Merriam’s Open Series win.

A few other cards I’ve considered:

I’m probably the biggest Reaper fan around, and I actually think the card may be as well-positioned as it’s ever been. Five toughness means it survives
Stoke the Flames, deathtouch lets it attack through Siege Rhino, and the ability to gain hexproof means that it can dodge just about every removal spell
once you untap. That said, Reaper still dies to Foul-Tongue Invocation and Crux of Fate, and it does nothing once Elspeth hits the table. I’m not convinced
it’s where you want to be right now, but it might still be a better four-drop than Surrak if you’re not looking to play Collected Company.

Whisperwood Elemental was in a lot of the first sketches of the Den Protector+ Deathmist Raptor decks that I built. It’s a natural fit since the manifests
trigger Raptor, and manifesting a Den Protector is all kinds of extra value. I ultimately cut it from the G/W version because I needed better tools to
combat Elspeth, which meant Wingmate Roc, and I didn’t want too many five-drops in the deck. I could absolutely see shifting away from Collected Company
and toward Whisperwood in the G/B build since you’re already in a position to play more of a grindy/value-oriented game. That deck might be a good place
for Reaper, too – scrying on every creature death is especially powerful when you’re manifesting at the end of each of your turns.

This may be a bit of clashing of plans since Boon Satyr and Whisperwood Elemental are generally looking to take games in opposite directions. I’ve actually
swapped one of the Boon Satyrs for a third Herald of Torment here because it’s important to be able to give your bigger creatures like Reaper evasion to
break through stalemates, even if Whisperwood can give you the tools to win stalemates that do go long. I also added a single copy of Whip of Erebos to the
sideboard since those bigger creatures play well with lifelink against aggro, though it’s possible something like Nylea’s Disciple might be a better
choice.

If I were going to Grand Prix Toronto or the Open Series in Portland this weekend, I’m almost certain my deck would contain Deathmist Raptor, Den
Protector, and Rakshasa Deathdealer – the only real question is what the rest of the supporting cast would be. The deck just feels like it has so many
powerful things going on, and so many ways to tailor it against what you expect to face. My inclination is that the more aggressive Collective Company
version is a stronger choice against Esper Dragons and maybe red decks because of the lower curve, but this list is likely a better choice against other
midrange decks because it has better tools for playing a longer game.

What do you think? What kind of G/B deck seems best to you right now. Or do you think I’m totally off base? And, while we’re at it, what kind of deck would
you like to see me play in the Standard Super League next week?