I’m finishing this up the day before my wedding (10/10/10!). In preparation, we’ve obviously been playing as much Magic as possible â€” mostly cube with a little Scars Draft thrown in. Being around my friends again has made me think about our cubes â€” the different card choices, but also how mutable it is depending on the people drafting it.

When I moved to Pennsylvania last year, I left behind two of the people I used to cube with most. Max and Joe are out here this week, and so of course, we’ve spent a lot of time drafting the cube and talking about it. When Justin and I left Oakland, they made a
cube of their own,
starting with my current list. But instead of drafting with two or four people, they often had the full eight. That change, along with the opinions of a new group of players, caused our cubes to diverge.

Max and Joe increased the size of their cube to 720 in order to accommodate two drafts without shuffling. They added more archetype-specific cards like Armageddon and Entomb. They also reinstated some old favorites that were missed, like Arc-Slogger and Plow Under. For the first time, they had to address the issue of whether to include the Power Nine, or ban them for being un-fun. They decided to leave the power in, a decision I agree with fully. 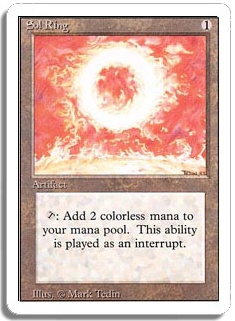 In my experience, power does impact games, but not in an un-fun way. Most often, it just means that someone wins faster, which isn’t the wrenching experience that losing over the course of many turns to a Sword of Fire and Ice or Capsize can be. Furthermore, it’s not feasible to create a format where some cards aren’t better than the others. If you remove the ten most broken cards from your cube, ten others will become the most powerful cards. And finally, it takes some games to really believe it, but cards like Sol Ring and Umezawa’s Jitte are often more problematic than any single piece of power.

What was different for Max and Joe was that the larger card pool used for drafting meant that some decks with multiple sources of fast mana got pretty degenerate. Those situations are certainly unbalanced, but the unfair games end quickly, so I don’t see it as being a huge detriment to the overall fun level of the cube. My feeling is that even if I’m losing to turn 1 Sarkhan Vol or the like, it’s still pretty cool to see it happen, and one of the things that makes the cube feel unique.

It’s been really cool to talk to the guys about their thoughts on specific cards, rather than just looking at someone’s list. When you just read through a list of cards, you miss a lot of information about how good those cards have been, or the context in which they’re played. For example, Joe and Max have emphasized draw denial in green by adding Stunted Growth to their cube. I asked how good it had been, and they told me that it had been awesome, especially with acceleration.

I was surprised at some cards that had worked out well for them, like Stinkweed Imp. They wanted to support reanimator decks with another way to fill your graveyard, and he fit the bill. On the other hand, they haven’t been particularly happy with Tinker, as it’s somewhat card pool dependent.

That kind of assessment isn’t possible just from the list, since there’s no way to call the barely-ins from the all-stars.

It’s also pretty interesting to hear that kind of stuff from someone whose draft style and skill you know. Joe and Max are both very good players, and I know they’re very capable of evaluating cards for the cube. At their suggestion, we’re trying out Slith Firewalker and Frost Titan in our cube. It helps that I know Max really loves to draft aggro decks, so I trust his opinion about what we’re missing out on.

It’s been interesting to compare our experiences with cubes that started out in a pretty similar place. For example, Max mentioned that red aggro was one of the strongest decks in their cube, which is something I’ve been trying to push. After looking at their list, I realized that we have a pretty similar amount of support â€” it’s just that the format of their drafts (six- or eight-man) is more favorable for both mono-color and aggro. Our conversations really highlighted for me the influence of card pool size on the decks that can be built.

Similarly, Max told me that they limit the number of lands in each draft to stop five-color control from being too strong. That isn’t something we’ve had to do, which is probably partly influenced by the number of drafters, and partly by the fact that neither Justin nor I tries to draft that deck.

One thing I didn’t anticipate is that it’s kind of a different experience to discuss your cube choices with someone who doesn’t
need
to agree with you. When I talk about the cube with Justin, I sometimes lobby a little too hard for the cards that he doesn’t like, such as Abyssal Persecutor. I feel like I need to make a case for the cards that I want to keep in. It’s actually easier in some ways to have a “fair” discussion with someone whose opinion doesn’t have to match up with your own. If Joe and I talk about a card and flat-out don’t agree, that’s perfectly fine, and in fact, having a different card pool now effectively means that we have more information in the future, since we don’t have to personally test every card we think might be worth it.

It’s possible to have a discussion on that level with someone you don’t know â€” there are tons of people who cite forum input as drastically improving their cubes. But I’ve really enjoyed the extra level of information that comes from having this discussion with people whose style you know. In this best case, I think this type of exchange can be really helpful in finding little-used cards that pull their weight, since those cards won’t be well-served by consensus-style results like the
MTG Salvation Cube Comparison. 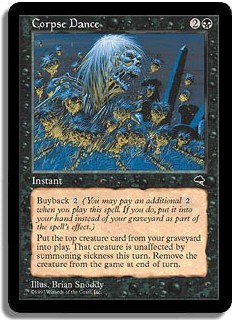 Finally, it’s been pretty fun to get to be a spectator in cube games again. Max drafted a sick R/B deck, and after he handed me my face with it, I got to watch him combo out with Corpse Dance/Attrition and the equally awesome Corpse Dance/Sarkhan the Mad (seriously, is there a cube card that doesn’t combo with Corpse Dance?), or just beat down with Hellspark Elemental into Koth of the Hammer. I’ve gotten pretty good at channeling frustration at losing into appreciation of a really good deck, but sometimes it’s nice to just sit back and watch with no stake in the match. The same thing is true for drafts â€” I always find it interesting to watch a good drafter and see how they value cards and deal with signals and hate-drafting. I’m always interested to see when other people decide on a direction while drafting, and how they ultimately decide tough picks.

A drafting aside: Joe built a sick U/G deck with Mystic Snake, Condescend, and Jace, the Mind Sculptor. I learned after the draft that he’d opened a pack with Jace and Mana Drain. Isn’t it crazy to think that there’s a Standard-legal blue card that’s legitimately worth picking over Mana Drain?

Aside from helpful Magic conversations, this week really drove home to me how lucky I feel that I started playing Magic. I just had this moment of “I really care about these people, and I wouldn’t know them if not for this game.”

And while it’s possible that any hobby would’ve yielded similar results, in some ways I feel like having Magic in particular in common has made it easier for us to stay in touch and reconnect despite being busy/in different time zones/generally crappy at writing those state-of-my-life-type emails. It certainly doesn’t hurt to have Magic Online along with other social media, and in fact, this weekend has resulted in plans to play Pauper online together. Maybe it’s just because these friendships have already survived Mana Drain on Harrow, but I have a lot of faith that Max and Joe will be in my life in the future. So that’s a pretty big deal when you think about it.

Tomorrow morning, I’ll be starting off my wedding day with a
newly swank
cube draft. I wouldn’t have thought it would take this form a few years ago, but I’m super excited at the prospect of starting off a big day by spending some time with my friends, who I can only assume will take this opportunity to pass me Jace, the Mind Sculptor and let my Vedalken Shackles stick. I’ll let you know how that turns out…

Has Azorius Control supplanted all its controlling peers in Modern? Shaheen Soorani makes the case for Solitude and friends.

There's Something Enchanting About Enchantress In The New Modern

Modern Horizons 2 brought potential tools for an Enchantress revival in Modern. But can it compete? Dom Harvey surveys the field.

On this episode of The 540, Justin Parnell and Ryan Overturf go in-depth on the red and black cards of Modern Horizons 2.

Everything I Know About Five-Color Humans In The New Modern

Can Humans weather the Modern metagame storm brought by Modern Horizons 2? GerryT gives it his best shot. Make that shots...

Dragon's Rage Channeler, Not Ragavan, Is The Future Of Modern

Dragon's Rage Channeler has made Todd Anderson one happy Modern fan. See how he is building with the powerful one-drop from Modern Horizons 2.

Do Yorion, Sky Nomad decks still have a place in Modern with the release of Modern Horizons 2? Sam Black has brews to give hope to 80-card fans.
View More