Weeks before the Prerelease, when card information starts trickling to the masses from WotC, cubers are put into an interesting position. Like everyone in the MTG community, they are caught up in a vortex, not only in amazement at the new cards, but of how to evaluate the cards without real-world experience.

I’ve been testing to see how often the Innistrad Werewolves transform in cube (particularly Kruin Outlaw / Terror of Kruin Pass, the best of the werewolves that have been shown so far). This got me to thinking that these cards will be particularly difficult to evaluate because they play very differently from other cards. Their flipping is based on a factor that’s rarely been tracked in cubeâ€”whether someone plays a spell or not in a turn. Most of what has been said has been entirely theoretical, based on only initial impressions of the cards. However, many cards that are shown in new sets aren’t as abstract for cube designers. In this article, I’ll discuss how to utilize those initial impressions of cards for cube and how to use these impressions effectively. 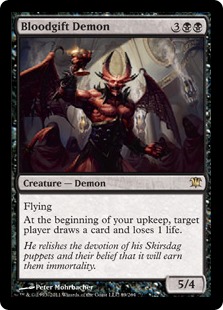 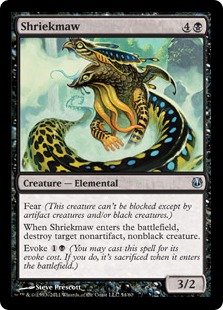 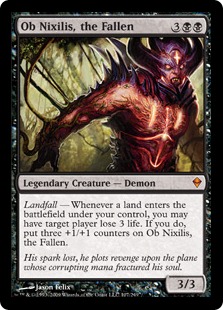 When looking at new cards for cube, we generally think of them in comparison to other cards. (How does this five-mana black creature compare to others at that cost? How does this one-mana red burn spell compare to other red one-mana spells and burn spells?) Using comparisons is a useful tool, since it allows you to compare the power level of a card to its direct competitionâ€”Bloodgift Demon will be a solid cube card because it offers a lot of power on an evasive body with a relevant draw ability that compares very favorably to other similar creatures (Graveborn Muse) and other five-drops (Shriekmaw, Ob Nixilis, the Fallen, and Drana, Kalastria Highborn).

Comparing cards directly to other cards that generally have few slots in cube such as finishers and mass removal effects is pretty easy. These cards have few slots because control decks typically don’t use a lot of those types of cards, and having a ton of dragons and wraths instead of efficient aggressive creatures makes aggressive decks suffer, but I’ve gone over this concept in a previous article.

However, because there are so few of the big mana effects, using existing ones as direct analogues in cube makes a lot of sense. Think about how in Standard, essentially every 6+ mana finisher has to compete with the M11/M12 Titansâ€”something will have to be very strong to be able to compete with the Titans, and cards like Consecrated Sphinx have been able to go toe-to-toe with the Titans. 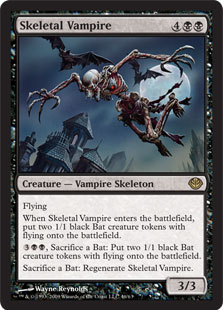 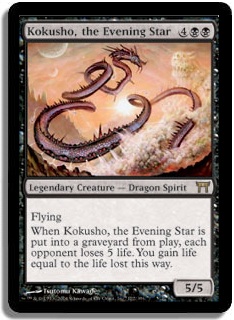 In cube, much like in formats like Standard, the existing mass removal effects and big mana finishers are essentially gatekeepers for new ones, as new ones have to be able to be as good or better than existing ones due to the limitation on those types of effects.

Consider when Skeletal Vampire was printed in Guildpactâ€”until Kokusho, the Evening Star was phased out of Standard, Skeletal Vampire saw little play, but it got a lot more attention once the Dragon left Standard. In cube, big mana finishers at the Kokusho/Skeletal Vampire mana range are similar, with cards like Massacre Wurm and Visara the Dreadful not making the grade due to the competition at that mana cost. Glissa, the Traitor has suffered a similar fate due to lack of space; she’s a very solid card, but due to the very stiff competition from cards like Maelstrom Pulse, Spiritmonger, and Pernicious Deed in G/B, she’s not played in many cubes.

While cards with few slots can be in competition with similar cards (like Kokusho vs. Skeletal Vampire or Massacre Wurm), that doesn’t necessarily mean that the number of mass removal effects or big creatures is completely inflexible, as a cube is a manifestation of the best cards of all time. A newly printed card and the composition of the color can make it so that a new card doesn’t necessarily kick a similar one out.

When Sun Titan was printed in M11, I was only using Yosei, the Morning Star, Exalted Angel (counted as a 2WW creature in my mana curve), Eternal Dragon, and Akroma, Angel of Wrath, and while Sun Titan didn’t oust any of those creatures from my cube, Sun Titan was powerful enough, and my white mana curve was low enough to make it so that I could cut something at the three-mana slot to include Sun Titan. 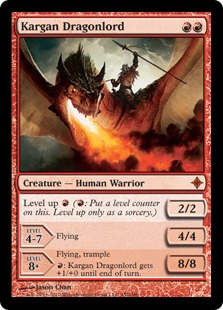 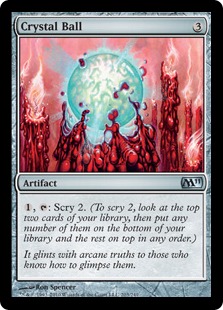 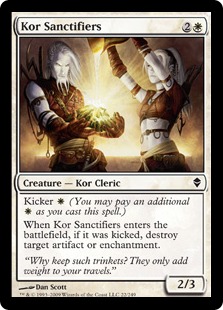 Cards like the Rise of the Eldrazi levelers were initially panned by many Magic players (not just cube designers) because when people compared them to other existing cards, the levelers looked bad. The levelers didn’t give the upfront big bodies that echo creatures did, didn’t provide the ability to be changed at instant speed like morph creatures or Figure of Destiny, and the bodies were inefficient at every stage when considering total mana cost (Kargan Dragonlord starts out as a harder-to-cast Grizzly Bear, six mana for a 4/4 flier, ten for an 8/8 firebreathing, flying trampler).

When focusing on the negative aspects of the levelers, they look terrible. Who wants to pay six red mana for a 4/4 flier, after all? The problem with this evaluation is that it was disingenuous and focused merely on the negative aspects when comparing cards to other similar cards, and looking at a card through a distorted lens does little for actual card evaluation. Once people started to play with the Rise of the Eldrazi levelers, first at the Prerelease, they found that the cumulative mana argument failed, as going all-in on a leveler was generally not a good idea unless there was nothing better to do with the mana.

Crystal Ball was initially dismissed by many, as people, myself included, compared it initially to colorless library manipulators like Scroll Rack and Sensei’s Divining Top. Both of those cards could help you get a needed card from your library and play it immediately, whereas Crystal Ball couldn’t, and therefore, it was seen a weak cube card. While Crystal Ball ended up being not as good as those two, the card still ended up being a solid cube card because Crystal Ball was a very good long-term library manipulator.

I may cut Crystal Ball in the future when a few more good artifacts get printed; looking into Crystal Ball’s performance again shows that focusing merely on the negative aspects of comparison shows a distorted image of a card.

Kor Sanctifiers was a card that I and many others initially dismissed for cube. I thought that it was a bad card for cube because it’s inefficient compared to other cards like Indrik Stomphowler, but that was faulty logic for several reasons: Â When you consider the card on its own [Disenchant for 1W, a 2/3 for 1W], it’s a solid deal overall, especially with the myriad of disenchant targets in cube! Also, there are a lot more artifact and enchantment removal “on a stick” options in green than in white, so wasn’t my comparing the two somewhat disingenuous?

What can we learn from this and how do we avoid this?

Focusing just on the negative aspects of the differences between cards leads to an exaggeratedly negative evaluation of a card that isn’t a true reflection of its performance. Considering the overall effect of a card is a much more useful tool for card evaluation.

I’ve generally found that just testing the cards is a more efficient method of evaluation than speculating power level. Thea Steele did an article on testing cube cards a while back, and typically when I test new cards, especially newly posted ones, I’ll use a generic “shell” of a deck (not always using a regimented precon of a deck, sometimes quickly constructing a basic archetypal deck) that the card will be used in (like using Kruin Outlaw in a B/R aggro cube shell) vs. another shell deck or a cube precon (like U/G control or W/G midrange) to see how the card performs in a short time frame, as doing 8-man drafts aren’t efficient enough to get a good number of games in during a small period of time. Granted, it’s not a perfect method with the small sample size, but it’s enough to start generating some useful information by giving some real-world data on the cards.

Obviously not everything that gets released in a set needs to be tested for cube, like Battleground Geist, a card that’s just underpowered when compared to other five-mana guys in blue won’t ever touch a cube.

As an exercise of comparison, let’s consider the newest member of the X-spell family, Devil’s Play. 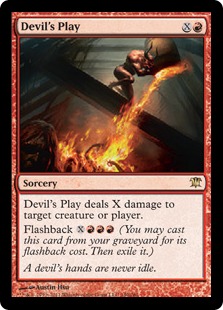 It’s obviously better than Blaze (but who’s using that?), but how does it compare to other existing options like Banefire, Fireball, and Demonfire? Every one of those cards has a potential upside, but what is better than the others?

It can be easy to fall into the trap of exaggerating positive aspects of a card as well, saying, “I’ve used Demonfire, and it’s won me games that I couldn’t win because of being hellbent; it’s the best. It’ll probably be more relevant than the flashback on Devil’s Play.” With this example, the main thing that’s being considered is the relevance of the upsideâ€”will the hellbent be more relevant than the ability to split a Fireball or the flashback on Devil’s Play or the uncounterability on Banefire towards total wins for red decks? At this stage of theoretical evaluation, it’s very difficult to quantify.

However, these simple comparisons aren’t the only kinds of cards when looking at a new set. For example, with cards like Moltensteel Dragon, the direct cards for comparison play quite differently. Nearly every four-drop in a cube’s red section has some kind of immediate effectâ€”Avalanche Riders and Goblin Ruinblaster (actually a four-drop) act as LD; cards like FTK (Flametongue Kavu) destroy creatures; and both Hero of Oxid Ridge and Blistering Firecat can attack for a ton of damage out of nowhere. Focusing only on the negative would make Moltensteel look bad by comparison: “it has no immediate effect unlike the others, and it can even die when pumped; at least the other four-drops are safer.”

Despite having not much in the way of direct comparison, it’s also important not to lose focus on the basics of raw power and how efficiently something performs compared to other similar cards (in the case of Moltensteel Dragon, â€˜big dumb’ creatures). Not everything has a direct analogue; that may be why there hasn’t been much talk in the MTG community as a whole on whether the Werewolves are good enough for Constructed or Cube. There isn’t much to compare them to aside from their lackluster unflipped iterations, and of course, that only tells part of the tale, much like initial card impressions themselves.

@UsmanTheRad on Twitter
My blog featuring my cube lists: http://idratherbecubing.wordpress.com
Cube podcast that I and Anthony Avitollo co-host: The Third Power