Welcome back to our multi-part exploration of Commander Cube! For those who missed the first two installments, please enjoy Part 1 and Part 2 first.

By the end of those articles, we had the info we needed to put together our first Commander Cube. Now, we’re going to go over a few bits of advice regarding setup, draft, and play.

The Cube’s Commands for Setup

The only non-negotiable, non-random element in creating packs for Commander Cube: The first pack(s) should have all the legendary creatures in the draft.

Changing color strategy midway through a regular Cube (or other typical, three-pack, 40-card) draft is no big deal; in fact, it’s sometimes an excellent idea. Changing color strategy midway through a Commander Cube, on the other hand, is toxic to everyone around the table: there is not enough time to correct the kind of self-inflicted wound and table-wide ripple effect that arises from starting with Ghave, Guru of Spores in Pack 1 and then opening an Oros, the Avenger in Pack 4 and deciding to switch. (Other on-the-fly judgement calls, like not picking up enough color-fixing or creatures or removal, are still perfectly possible, understandable, and correctable throughout a six-pack draft.) 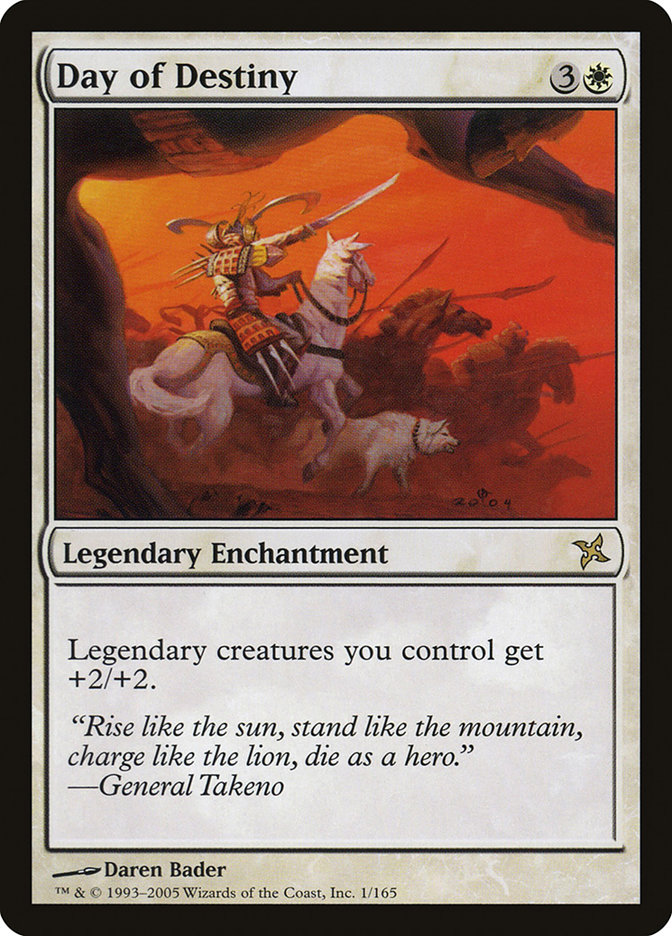 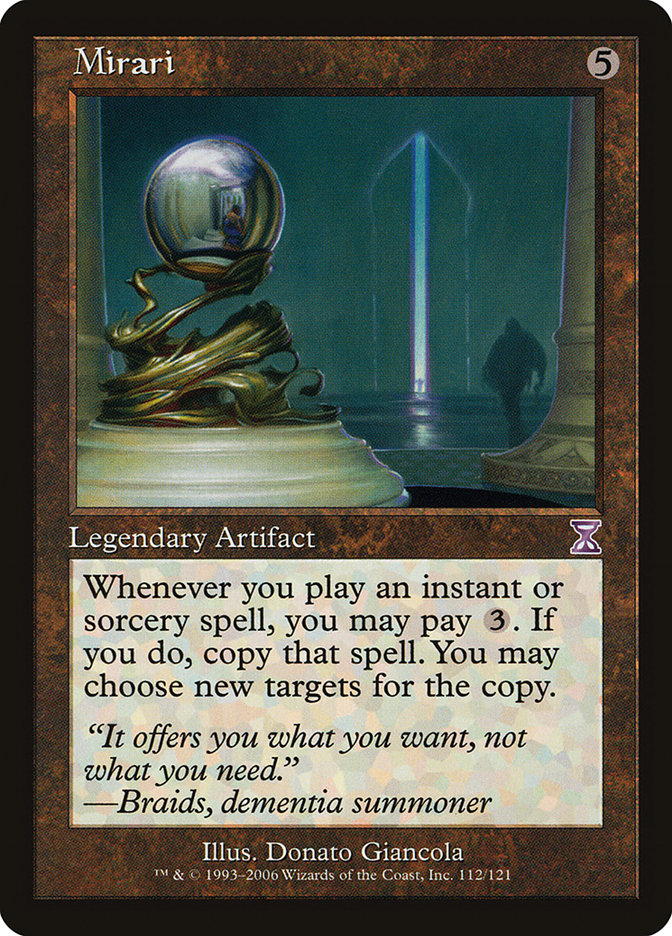 If there are not enough legendary creatures (120) to fill all fifteen card slots in all eight packs that get opened first, sprinkle in whatever works. Our group’s Commander Cube happens to have enough legendary nonland permanents (e.g. Day of Destiny, Mirari) to round out the over 100 creatures, and so those 120 cards will always shuffle up and become the first packs drafted in Commander Cube.

After that, there is no hard and fast rule. Shuffling up and completely randomizing the remaining hundreds of cards all together is difficult and may result in uneven and/or unsatisfying packs. But it can be done without violating any Commander Cube by-laws, and in a rushed pinch, this may save a few minutes from the method recommended below. 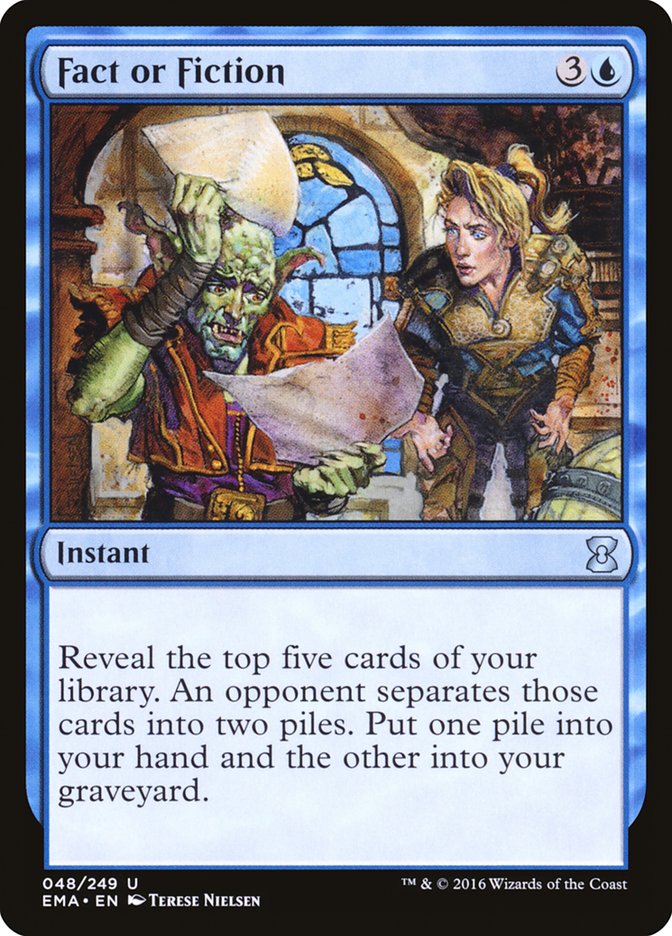 Maximizing the chances of a satisfying drafting experience for everyone may take a bit more time, but it’s proven to be worth it. Even Wizards as a company takes certain measures to ensure a consistent drafting experience with every set they create; for example, they ensure print runs can’t accidentally generate 100% “red” or “blue” packs. A Cube of any kind, including a Commander Cube, is essentially a small, individualized expansion to be drafted.

To get the “as-fan” proportions right, break the huge pool down into sub-pools. Here’s how it works, broadly speaking:

Subdivide. Divide up the big pool into smaller pools of cards that are “like,” and which are at or as close to multiples of forty as you can manage. One way to subdivide cards is by color identity (zero-color, one-color, two-color, etc.). Another way is by converted mana cost. A third way is by card type. Whatever works and is easy to manage.

Distribute. Pick one subdivision (say, nonbasic lands) and distribute the cards across the 40 packs face-down until there is a remainder less than forty. (So if you started with 83 cards, you’d make 40 packs with two cards and your remainder would be three.) Then set that remainder aside.

Repeat. Go on to the next subdivision and do the same thing, adding the new face-down cards to the existing piles. Add the remainders to your “remainder” pile as needed.

Finish. Once you’ve gone through all the subdivisions, the cumulative remainder pile becomes its own subdivision; you shuffle it and finish pack construction. If you’ve set up the Cube correctly, the count should be exact (unless you have an intentional random “set-aside,” meaning your Cube is more than 720 cards).

Again, you don’t have to do all that. You can shuffle up and set up the last five packs without any subdivisions, if that’s easier. I’ll never know. Wizards will never know. Abe Sargent won’t know. Even Cube founder and mighty judge Sheldon Menery won’t know.

The Cube’s Commands for Drafting and Building

Time management is key during a Commander Cube draft. Everyone can help out by following a few guidelines:

Everyone shows up on time. Whether you’re doing this at a store or in someone’s home, make your best effort to be there when everyone else is ready to start.

Make sure everyone knows the rules of Commander, and drafting, prior to arrival. Don’t waste time with basic explanations. Anyone who hasn’t played Commander before, or anyone who’s new to drafting as a concept, can do Internet or other research beforehand. Of course, questions of detail and friendly banter are all part of a new experience; no need to discourage that sort of thing!

Consider a timer for each draft pick. This is easy to do with a smartphone or an analog stopwatch or timer. I recommend 45 seconds per pick, which will bring the draft time to just over an hour (instead of an hour and a half). If your group is experienced at drafting and the cards are all familiar to everyone, try 40 or even 30 seconds per pick. This may feel rigid, but if everyone goes into it understanding that all the cards in the Cube are good and fun to play, it may actually take some of the anguish out of choosing a specific card. Be nice to each other if someone goes over time; the point here is fun, not clockwork.

Definitely use a timer on deck construction. Fifteen minutes recommended.

I Command You, Cube: Play!

And here we are at last: the payoff!

Remember where we started, when we first introduced the format’s challenges: the goal here is for each group to experience as many interesting and interactive games as possible, with as many eventful and engaging turns within each game as possible.

Sometimes, a really long game can be epic and memorable and fun. In this format, it’s best to recall that most epic games have players who are eliminated early…and they have to sit and wait for everyone else. 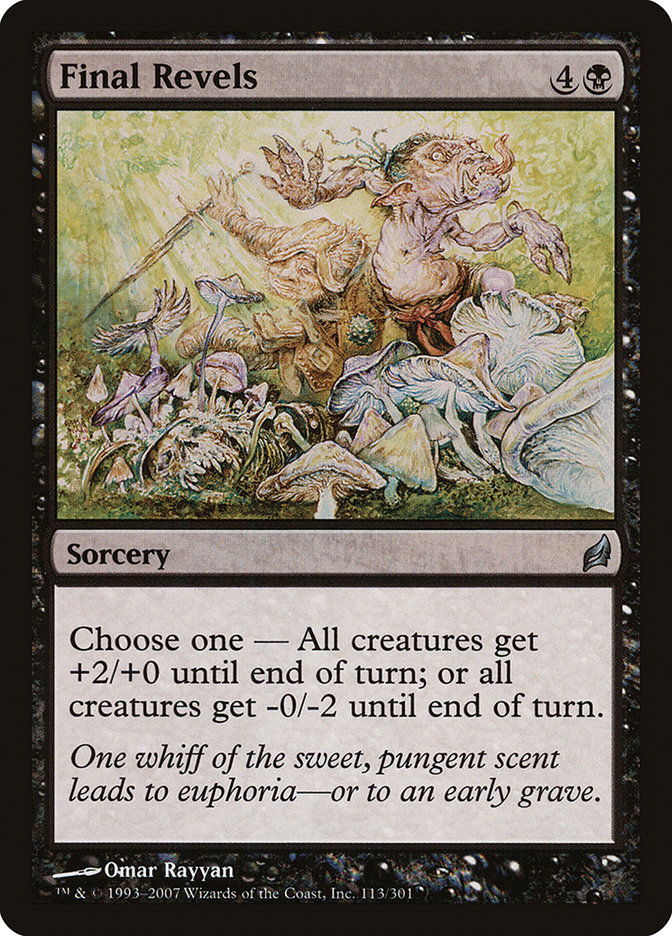 If you’re hosting a Commander Cube, keep your eyes open for idle players. Two players sitting and waiting can play a short duel while they wait. Three players (perhaps two from one game and one from the other) could even start a whole new multiplayer game and the other five players can then band together into a new game once they’re all available. The point is, don’t make people wait to play if you don’t have to.

Here are tangible indicators of interesting and interactive games, with eventful and engaging turns. They’re not hard and fast rules, just signals that people are probably having enough opportunity to have fun:

While it may be possible to have a Commander game where none of the four players experience any of the above, and yet all four agree it was a wonderful and fun experience, I would not rate the probability as high.

After the session is done, get your fellow players’ opinions, through conversation or email or however, and learn the following:

The first few times you run your Cube, ask the players to leave their decks and sideboards intact. Take time after it’s all done to look through the decks and see what got played…and what didn’t. If you keep seeing certain cards or color combinations get low instances of play, change up a few things for next time. From this point, maintaining a Commander Cube is like maintaining any other Cube: you adjust, you test, and you adjust some more. Cubes are labors of love; you get back what you put into them, and more. Enjoy!