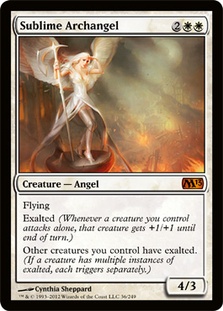 This is the only card that I don’t think has huge potential; I don’t see quite what all the hype is. I don’t like attacking with one creature, especially against a control deck, but this card encourages that you do so. Imagine you have a board with four small creatures or tokens. Would you rather have Sublime Archangel or Hero of Bladehold? Sure, the Angel will turn one of your tokens into a 6/6 right away, but if you ever untap you’re going to wish it was a Hero of Bladehold.

Ok, I’m sure you’ve heard enough about the big name cards like Rancor, Thragtusk, Thundermaw Hellkite, and Door to Nothingness. So let’s talk about some cards that haven’t really been discussed just yet. 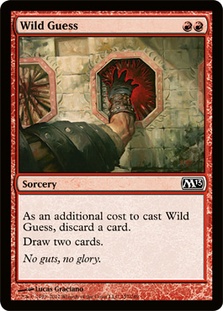 This card seems really sweet in a R/B/W Reanimator deck. That color combination has been lacking a good draw spell. Wild Guess lets you pitch a fatty or a dead card to draw some new ones. I could even see it as a one- or two-of in a control shell like Grixis to help you filter your hand. 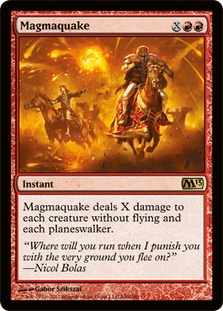 Another red card that I believe is really good. It’s what you want Bonfire to do every game: wipe their board and kill a planeswalker. This card will obviously be kept in check by Delver of Secrets and Lingering Souls. 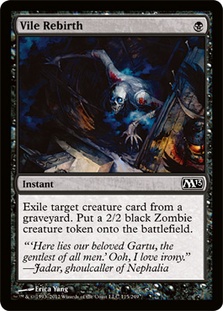 A very mundane effect, I know, but so was Unsummon until it made you lose one life and you could Snapcaster it back. This card should see some sideboard play, especially once we lose Surgical Extraction and Nihil Spellbomb. 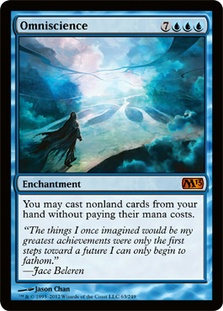 I feel like this card just replaces Dream Halls in Legacy. I would play four of these before I play any Dream Halls. Omniscience also lets you cast colorless spells for free like say, Emrakul. I know Omniscience isn’t strictly better than Dream Halls since you might be able to actually cast Dream Halls but you’ll never cast Omniscience. I just like how it allows you to Show and Tell it into play and if you just have one spell in your hand, you can cast it. You won’t have to wait to draw another card to pitch. Dream Halls lets you cast from any zone, whereas Omniscience lets you only cast from your hand. Let’s be honest, though, we are just going to be casting from our hand anyway. Another huge factor is that Omniscience is only one sided; Dream Halls is not, and I think that on its own makes it better. 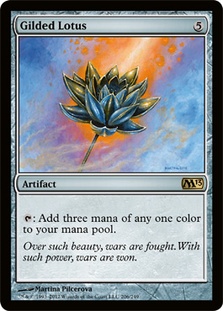 This card was played in ramp decks in the past, and I’m sure it will continue to be played in ramp decks. I also think it is very good in control decks. Right now there are a lot of spells I would like to cast in Standard, and Gilded Lotus helps a ton: Army of the Damned, Griselbrand, Increasing Ambition, Nicol Bolas, Planeswalker, and Omniscience just to name a few. Going from turn 5 to turn 9 is a pretty big deal. 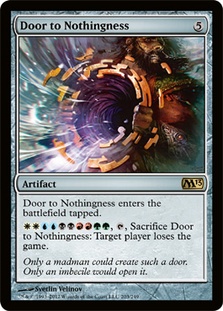 Not sure how this card isn’t mythic. This card is on the same level flavor wise as Mindslaver and Platinum Angel. I want to play it so badly, but I’m not sure how to go about it. I’ll let Adam Prosak come up with a shell. Hear that Prosak? It’s on you! (I also wouldn’t recommend playing this deck. ;P) 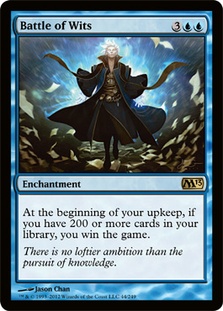 Now this is a type of strategy I can recommend. If you have the bigger deck, you’re the bigger man. Bigger is better in our society, and for good reason. Look at this enchantment: you just cast it, then it checks to see if you’re a manly man on your upkeep. If so, you win the game. Plain and simple; no ifs, ands, or buts! We’ll definitely be building two Battle of Wits decks. 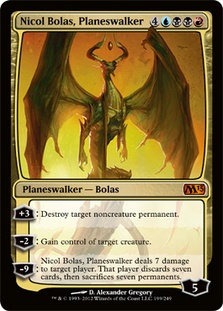 While we’re on the subject of manly, let’s talk about the manliest gentlemen in the multiverse: Nicol Bolas, Planeswalker. If you can cast this mighty Dragon, he will do all the work for you. You just have to sit back and relax. He eats any pesky planeswalker or permanent for that matter and grows. He can simply be a permanent double Control Magic if that’s what tickles your fancy. And his ultimate is a Door to Nothingness if I’ve ever seen one. He does all this while wearing a scarf. Nicol Bolas, Gentleman and Scholar of the Multiverse.

Alright, now that I’ve hopefully got you reading, let’s talk Battle of Wits. In the past, Battle of Wits decks had to run some subpar cards that really just sucked, like Dark Banishing as spot removal. Now, though, we have so many good removal spells that we really can’t fit them all even if we want to. We have Doom Blade, Go for the Throat, Dismember, Geth’s Verdict, Grasp of Darkness, Tragic Slip, and Tribute to Hunger. All of these except Grasp of Darkness have seen play in Standard. Our cards right now are all premium, so a Battle of Wits deck is most likely going to be just a large deck with two hundred plus cards in it. We don’t have to run any filler or chafe. It’s a really good time to be playing a Battle deck.

First off, I wanted to make a Battle deck with Birthing Pod. Here is the list I have settled on for the moment.

This deck can win with Birthing Pod, swarming with creatures, Primeval Titan, or casting a Battle of Wits. If you ever get a Birthing Pod online, I think it will be very hard for you to lose. Since your deck is so big, you can Tutor up pretty much anything you need. In the past, we had the Wish cycle. We had Cunning Wish, Burning Wish, Living Wish, Death Wish, and Golden Wish. Well, now we have a Wish sideboard, but in our main deck. Instead of our Wish being a sorcery or instant, it’s an artifact that allows us to wish every turn. Not only that, but we also have another "Wish" card in the form of Green Sun’s Zenith!

Need to stop the mono-green beats deck? Grab a Tree of Redemption, Glissa the Traitor, Precursor Golem, or, if your chain is high enough, Elderscale Wurm or Stormtide Leviathan. Flyers got you feeling blue? Get Daybreak Ranger, Stingerfling Spider, or a Silklash Spider. Need to refill the board? Get Kessig Cagebreakers, Talrand, or Precursor Golem.

How can you not play this deck? At the very worst if you don’t get Battle of Wits, Birthing Pod, or any of your Tutor effects, you’re playing a Commander deck without a general.

The goal here is to either resolve a Battle of Wits, Omniscience, or Entreat the Angels / Army of the Damned. Omniscience allows you to essentially "combo off." After resolving one Tutor effect with Omniscience in play, you can make an army of Rune-Scarred Demons and end the chain with a Mindslaver to ensure victory. Yes, Omniscience costs ten mana, but you have Rampant Growth, Farseek, Solemn Simulacrum, Primeval Titan, and Gilded Lotus to help you get there. I don’t believe this Battle deck is as strong as the Pod Battle of Wits deck, but I can’t be sure.

Alright, one last Battle of Wits deck, and this one will be controlling!

This version just wants to stall as long as possible, and what better way of stalling in a creature format than to kill every creature? If this deck can’t find its Wits then it can win with some planeswalker magic, big spells, or ol’ Grave Titan! The board is just dedicated to other control decks since we overload on creature kill. If you want you can take some removal spells out in favor of counterspells, but I don’t think counterspells are the best right now.

There are many ways to build a Battle of Wits deck; just try to have some kind of theme. You don’t want to be all over the place if possible. You could build Delver Battle (yuck), Heartless Summoning Battle, Forgemaster / Grand Architect Battle, Aggro Battle, and many more. However you want to build it, you can. You never know when you’ll get the chance to play Battle of Wits again in Standard.