Last week, I asked the readers to vote which deck they’d like to see looked more in-depth. The results were above expectation with nearly 2000 votes in. It was a close race between Naya Tokens and Brave Sheep for awhile. It looks like Brad Nelson has championed the Joshua Watts creation, and while I’m pretty interested in learning the ins-and-outs of the deck firsthand, I’ll leave it up to Brad to develop the list further.

Brave Sheep wants to relentlessly jam lifegain until you’re far out of reach of combat damage killing you. The sheep prey upon a metagame full of quick creatures and burn spells while still doing enough powerful things to muscle through decks that aren’t.

20 Plains – Yeah, that’s a lot of basics. Alternative options include running temples and Nykthos, Shrine to Nyx. With a curve that starts on one and ends on five, we have little time to allow our lands to come into the battlefield tapped. Nykthos and Boros Reckoner don’t play particularly well together, despite how strong the three-devotion boost would be. The only outlet for excess mana is Heliod, God of the Sun and that’s not enough to warrant further colorless lands in addition to…

4 Mutavault – One of the great benefits to a single-colored deck is the luxury that Mutavault provides. Oftentimes you’ll need to get a Mutavault attack in to keep your Path of Bravery online. And remember to activate Mutavault when you get a trigger from Archangel of Thune, even if it has to tap itself to do so.

4 Precinct Captain – The tokens created here quickly turn into real threats alongside the Glorious Anthem effects in the deck. Those Anthems also make Precinct Captain harder to block, which can make the token generation quickly escalate.

3 Brimaz, King of Oreskos – The best three-drop. Note that you can attack with Brimaz and Path of Bravery and stack the triggers where Path of Bravery will see the Cat Soldier token for the lifegain. 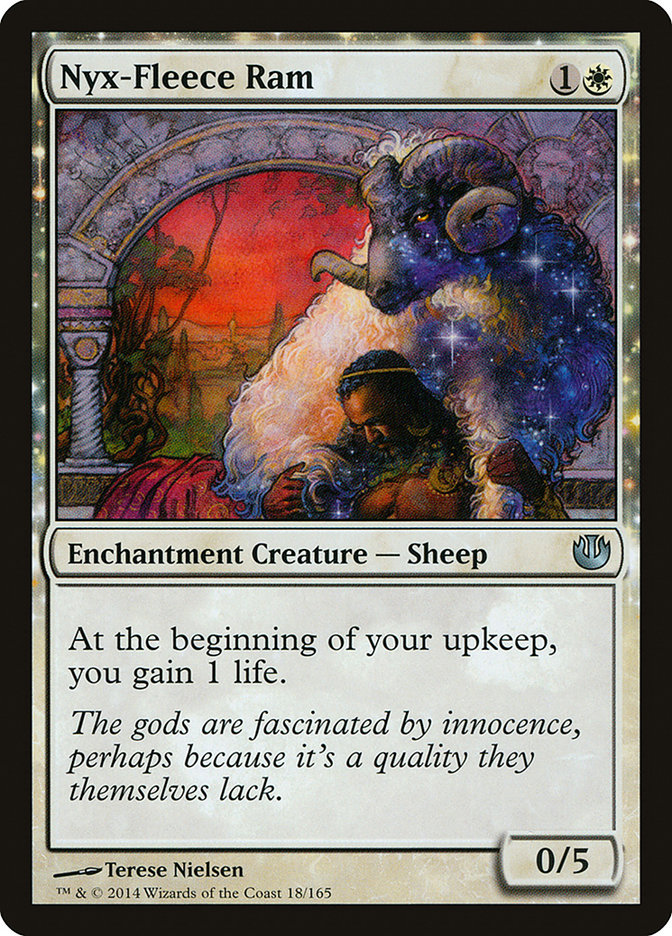 4 Nyx-Fleece Ram – The namesake of the deck. Nothing is better than attacking for lethal damage with a sheep. You’ll be attacking with these as quickly as turn three with Path of Bravery. Racing becomes next to impossible whether these are on offense or defense.

3 Fiendslayer Paladin – If there was a reasonable two-drop lifelink creature, it would be here instead. Since there isn’t, we’re playing these to keep the life total high and to trigger Archangel of Thune on turn five. Note that Fiendslayer Paladin will essentially gain an extra toughness when this happens, allowing you to attack into a Courser of Kruphix for example. Your creatures without first strike will receive the full benefit from the +1/+1 counter that turn.

3 Boros Reckoner – Great on offense and defense. We’re a mono-colored deck that can pay the strict colored requirement of Boros Reckoner, and Reckoner also makes Heliod, God of the Sun a creature easily as well as make attacking a nightmare for your opponent.

4 Archangel of Thune – Here we’re maximizing on ways to trigger Archangel of Thune the same turn she’s played. Far too often, you won’t be able to untap with this powerful Mythic rare – there is just too much spot removal in this format to rely on that. Trostani preceding Archangel is quickly picking up in popularity given its strong impact on the board immediately, and here we’re trying attain as many triggers as possible as soon as possible.

2 Heliod, God of the Sun – Partly a concession to control matchups, it’s nice to have a threat that’s hard to interact with and which is capable of producing relevant creatures. 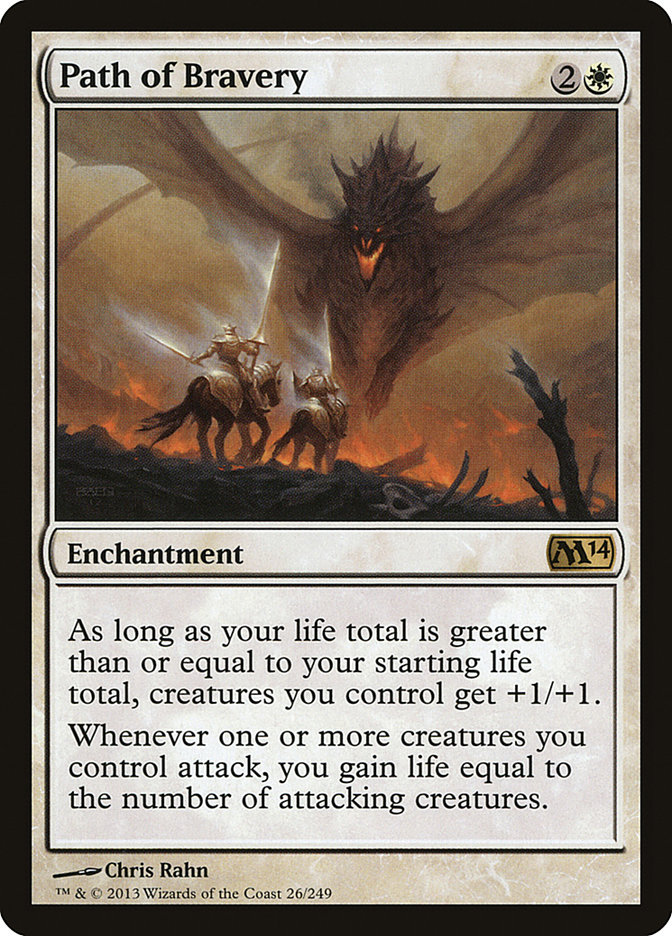 4 Path of Bravery – Hasn’t seen much play lately especially given that Spear of Heliod is typically a better version due to its reliability, added devotion, and extra ability. It’s possible that the card will “do nothing” in circumstances where you have no creatures and are far behind. Our goal is to ensure that doesn’t happen too often.

3 Banishing Light – One of the reasons that Mono-White hasn’t been a huge player recently is the lack of a versatile removal card like this. Before Banishing Light was printed, you had to hope that Banisher Priest didn’t die to removal, splash another color for their removal, or hope to get the game over quickly enough before the opponent had huge threats.

2 Brave the Elements – I’ve been happy with two as you need a healthy number of permanents for the deck to function. You don’t want to draw two or more when you need to be presenting pressure or adding more component to your lifegain engine, because giving your creatures protection to enable a lethal alpha-strike occurs less often when your plan is grow your creatures to become this much bigger than theirs in the first place.

3 Glare of Heresy – Extremely efficient for its cost. Hits Elspeth, Sun’s Champion as well as the Oblivion Rings of the format. Against opposing white-based decks, you want to be able to pick off their key threats like Brimaz and Banisher Priests.

2 Banisher Priest – Good against creature decks that are low on removal. Also good against tokens like the one created by Advent of the Wurm.

1 Heliod, God of the Sun – Some decks have fits over a resolved Heliod. Esper and Mono-Black Devotion are two of those decks. Those decks are sometimes capable of dealing with the first one, so drawing multiples isn’t necessarily a bad thing.

2 Rest in Peace – The B/G “Dredge” deck has been increasing in popularity, and it’s nice to have a card that single-handedly destroys them. It has to really impact them to be worth it – it’s typically not good enough against just Scavenging Ooze or against cards that trigger on dying like Voice of Resurgence’s token or Reaper of the Wilds’ Scry effect.

2 Ajani, Caller of the Pride – Good in matchups that can degenerate into a ground-stall and good when you want to present another threat with committing another creature to the board. It’s also sweet to get two triggers from Precinct Captain if you give it double-strike.

4 Keening Apparition – When this can unlock an Ephara from underneath a Detention Sphere or a Banishing Light, this card will become maindeck-worthy. As it stands, the deck is a bit too synergy-based to start them. Still, Keening Apparition is a strong card to have access to four of. Better than Deicide in most situations.

Versus Mono-Black Devotion and variants

Banisher Priest is good for hitting a Pack Rat token, but you don’t want to have one die if you exile a Desecration Demon or a Lifebane Zombie. They’re capable of picking apart your engine, so we take out some of the weaker pieces. Lifebane Zombie tends to get you pretty good, but there’s not much you can do about that. The versions with Nightveil Specter are much easier to beat. Be sure to wish them good luck on casting a Boros Reckoner that they flip.

They can’t remove Banisher Priest very easily, so they shine here. Your threats ought to trump theirs for the most part. Because Master of Waves has protection from red and that it’s the only red creature in your deck for their Tidebinder Mages to tap, Boros Reckoners get taken out. If you get the impression that they’re sideboarding out their Tidebinder Mages, you should take out three Precinct Captains instead as they can match up poorly against Frostburn Weird and Nightveil Specter.

The most likely way for you to lose this matchup is to a Satyr Firedancer getting out of control. The Keening Apparitions are great against that particular Enchantment Creature as well as against Chained to the Rocks. Even though Banishing Light doesn’t have a ton of targets, the ones that they do have like Satyr Firedancer and Chandra’s Phoenix are worth removing.

Versus Esper and other UW/x control

The lifegain from Path of Bravery won’t be very relevant, but because your life total will never be contested they should be online all the time acting as non-legendary versions of Spear of Heliod of Hall of Triumph. Nyx-Fleece Ram and Boros Reckoner are embarrassing game one and will be a relief to take out. This is likely our hardest matchup, which is why it has the most cards to bring in. Committing only two creature threats at a time forces them to Supreme Verdict for minimum value; attacking with a Mutavault is often better than casting a third creature.

Versus Red-Green and Jund Monsters

Polukranos hurts us a good bit, and Banisher Priest comes in for mainly that. Stormbreath Dragon can’t be removed and must be outraced. Mizzium Mortars is a concern and Brave the Elements should often be saved for that occasion rather than from saving a single creature from a Domri Rade fight.

Keening Apparition is great at containing their huge creature by killing their best Aura. Archangel of Thune is a little slow, and Brave the Elements is only really good when you’re setting up a big multi-block on a big creature with first strike. If they have Gift of Orzhova, you will probably want the third Glare of Heresy.

They usually run a ton of enchantments from Whip of Erebos to Nyx Weaver. Precinct Captain doesn’t get through Sylvan Caryatid easily and otherwise just gets trumped. Rest in Peace is really good against them, so good that you’ll want to mulligan questionable hands for it depending on how reliant their version is on their graveyard.

The deck is a blast to play. The look on a burn player’s face when you play a turn-two Nyx-Fleece Ram in the first game is priceless. Let Path of Bravery be your path to victory in the next tournament you play!