Well, as I argued a decade ago, 61 cards is a totally reasonable number to run if you haven’t (yet) figured out the card to cut. Given enough testing, you should cut down to 60, but at this stage in testing, I’d rather run the extra card and work on figuring out that cut than prematurely cut the wrong card. The 61st card that I’ve fit in is the second Search for Azcanta. Currently, my candidates for a cut are a land (perhaps a Swamp), the third Vraska’s Contempt, the third Torrential Gearhulk, and the second Glimmer of Genius. Some part of me is also considering cutting the maindeck Essence Extraction, but I feel pretty good about that card choice for now.

This last weekend, we saw a minor showing from U/B Control, with the top deck piloted by Aurty Ward to 48th place:

There are some card choices from Autry that I find quite appealing. Vizier of Many Faces is a great potential response to Carnage Tyrant. The tiny splash of red to enable Nicol Bolas, God-Pharaoh also feels quite appealing. I’m still not sure about the card Opt, but I’ve started seeing a few of the more controlling decks making use of it, and I am sympathetic to the potential that it might be a good choice, though I haven’t yet signed up for it.

Lost Legacy is a strong answer to God-Pharaoh’s Gift, which might have been a worthwhile foe to be thinking about this last weekend and maybe even moving forward, but overall neither that deck nor other potentially reasonable targets for the card (any Torrential Gearhulk deck, for example) really made a big splash.

Our decks have a lot in common, overall. I’m still trying to figure out if I’m comfortable with one newer choice for my build that Autry has made: only two copies of The Scarab God. The biggest reason I’m uncertain about the choice is red aggro: Ramunap Red is not great about defending itself, and running three copies of The Scarab God puts them on the defense that much more quickly. I’ve joined Autry in running two, but I don’t think I’m fully settled on that choice yet.

Of course, another deck had something exciting to add to the conversation.

This deck is basically the classic U/R Control deck that we’ve been seeing for a while, but with a splash of black to lay The Scarab God. That, in and of itself, isn’t a shocking turn of events. To me, the shocking thing can be found in Scott McNamara’s sideboard. 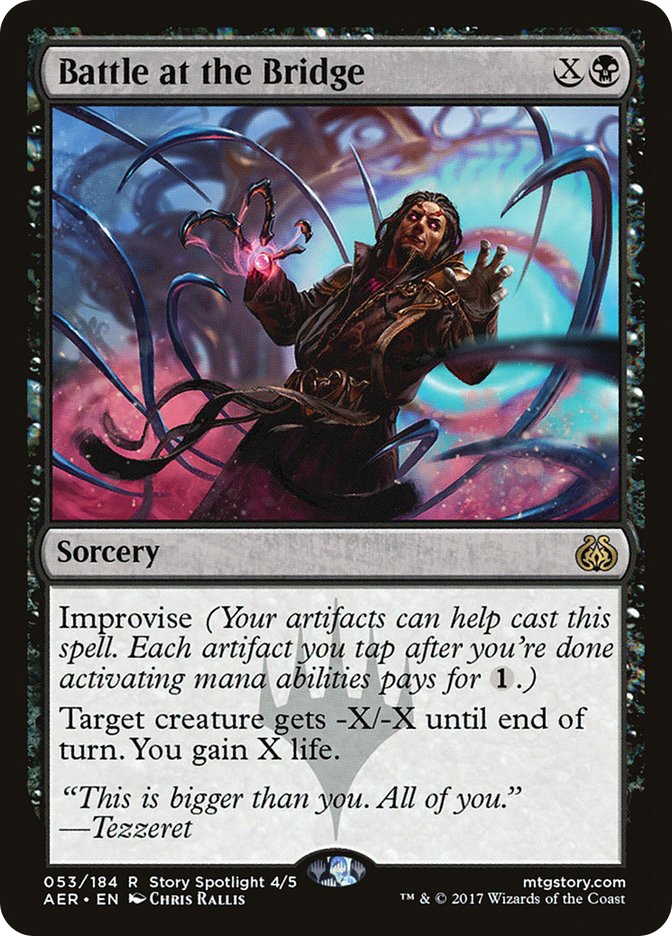 I literally swore out loud when I saw this choice. For a controlling deck running countermagic, the late-game against Ramunap Redhas a lot of things that are frightening. Hazoret the Fervent is a difficult card to manage. Ramunap Ruins is a monster of a card to deal with.

Battle at the Bridge utterly rips the late-game in half. While it only becomes more effective at the five mana mark, more importantly, it absolutely crushes two of the problematic cards for a Torrential Gearhulk to manage in the late-game. I haven’t yet incorporated this new bit of knowledge into my decks, but you can rest assured, it is in the mix!

I’d been toying with a number of different decks that ran on the red aggro shell that we see in Ramunap Red. One of the cards that really kept drawing me back in, though, was Ammit Eternal.

Even without haste, a 5/5 for three mana is just a hell of a lot of damage. Combine that with the pain one suffers from even blocking and the relatively abundant cards to help it get through, and it’s just an exciting path to take. This list, based in large part off of the Top 8 list piloted by Shintaro Kurata at Pro Tour Hour of Devastation, loses two powerful black incentives, Ribbons (from Cut // Ribbons) and Collective Brutality, but I think that the sideboard brings other valuable weapons to bear.

One thing I hadn’t yet done was try out that idea of Battle at the Bridge for the mirror. This isn’t a blue-based control deck, so it isn’t necessarily going to work properly, especially since what we need the card for, primarily, is to kill Hazoret the Fervent. Before I saw that card, I was looking to Vraska’s Contempt for that answer, and it could well be sufficient, but I can’t help but be curious if McNamara’s idea suits this deck as well.

Scrapheap Scrounger might actually belong in the maindeck, and if it does, it starts begging the question of whether or not Unlicensed Disintegration ought to be in the mix as well. Even as an expensive Terminate, the card is still remarkably powerful and worth contemplating. Getting the bonus damage in, though, is an absurd potential payoff.

With so many of the Ramunap Red mirrors working towards a better long game, going into black has potential as a great way to win that war.

I thought I’d save the wildest deck for last.

In a previous world, this deck might not have made much sense, but in a world where you are primarily dealing with swarms of creatures, this deck is pretty powerful at managing those threats. One of my favorite things about the deck is that you get to run Cruel Reality, an enchantment that feels like it might as well be a planeswalker.

I’ve had earlier versions of this deck that ran Dark Intimations, trying to find some way to get a bit of extra card advantage while still maintaining some control of the battlefield. Now, though, that card advantage need transforms into an engine in the form of Search for Azcanta, or, more accurately, Azcanta, the Sunken Ruin. The card is made even all the more powerful because you are also a Champion of Wits deck.

Vraska’s Contempt is a perfect fit for the deck, taking out nearly every potential problem permanent while also giving that little bit of a life buffer that the deck needs. Even though it does make the four-slot a little thick, I’m still running four of the card, though I’m considering dropping down to three.

The sideboard is particularly rough at this point. I’ve caught myself wanting Glorybringer; another Chandra’s Defeat; Liliana, Death’s Majesty; and, as of late, the still-untested Battle at the Bridge. I’m also generally always a little partial to Commit (of Commit // Memory fame), but that seems a little less important without a counterspell-based deck to put it in.

This deck is still rough, but it shows promise.

These aren’t all of my current brews right now, but they are my favorites for now. The SCG Tour stops at Charlotte next week for Modern (Standard Classic on Sunday!), and there is also US Nationals to think about; if you’re looking for something a little different, try these decks out.