There are several games where you’d happily run out a 3/1 flash flyer on
Turn 3 and get down to business. With Brazen Borrower, you also get to
ensure you have something to do with your mana on Turn 2.

In the late game, you’ll have several options for how to use your mana. If
you want a flash Riftwing Cloudskate, you got it. If mana is tight and you
just want a beater, that’s an option too. The versatility is what sells me
on Brazen Borrower and that’s exactly why it’s going to end up in multiple
different archetypes. For context, Dream Eater was almost playable and you
had to pay everything up front. 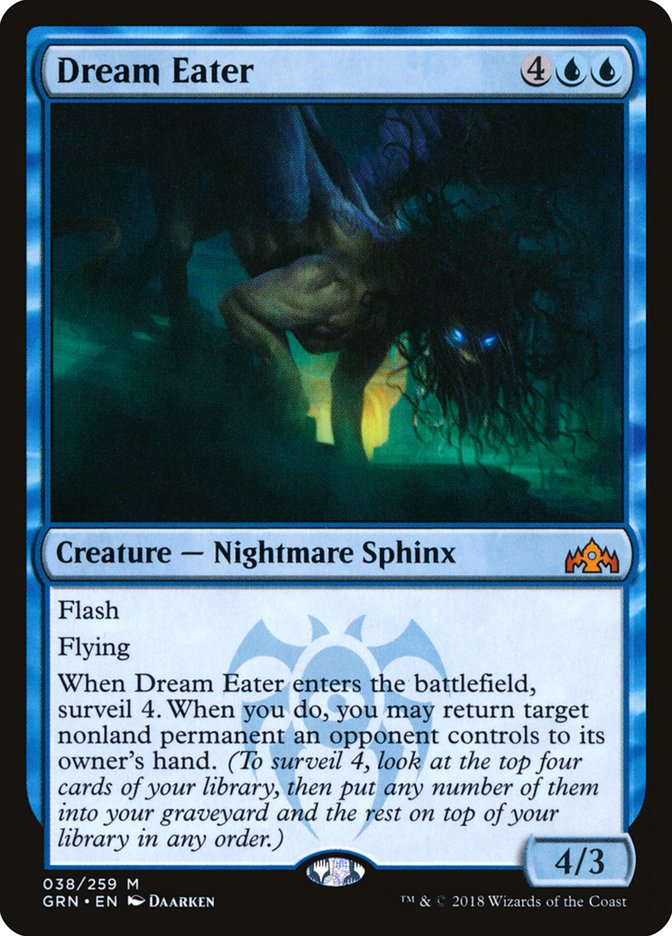 If anything, Brazen Borrower is great precisely because it’s split into
pieces. Over the course of a couple different turns, you’ll have the
ability to spend mana on both halves as you choose. Using your mana every
turn is one of the easiest and best ways to get ahead in a game of
Standard, and Brazen Borrower is well worth each mana spent.

Any Constructed-level bounce spell is going to punish expensive cards and
Borrower is no different. Players won’t be able to play a four or five-mana
card that doesn’t affect the battlefield while Brazen Borrower is out
there.

You’re right, but if you’re trying to take advantage of a flying
Man-o’-War, you shouldn’t be blocking. Obviously, you lose out on some
strategic decision making, but like Nezumi Cutthroat before it, Borrower’s
“downside” is actually helpful game advice.

Simic Flash was a reasonable choice last season and that looks like it will
continue. There are some upgrades to the manabase and the creature suite,
but we only have access to significantly weaker counterspells.

Brazen Borrower is absolutely perfect in Simic Flash. People were already
playing Unsummon as a means to remove troublesome creatures that slipped
through the counterwar, and this one comes attached to a threat. Granted,
it’s more expensive than Unsummon, but it hits any permanent, and it’s not
like we’re cutting Unsummon completely.

This deck can be clunky and fall behind quickly with no catchup mechanism,
but in a world of midrange, this is exactly where you want to be. Should Throne of Eldraine Standard become infested with Knight Aggro and
Mono-Red Aggro, you’ll want to find a different deck.

Oh, look! Brazen Borrower is also a Rogue. Robber of the Rich just got
much, much better. As an aggressive deck with a low curve, your Robber of
the Rich should be active more often than not.

If we’re not going hard on Faerie Vandal, we could utilize Light up the
Stage instead of things like Winged Words. The Royal Scions is perfect for
Faerie Vandal while also turning each of your Faerie Miscreants into actual
threats. They also pair well with Robber of the Rich. 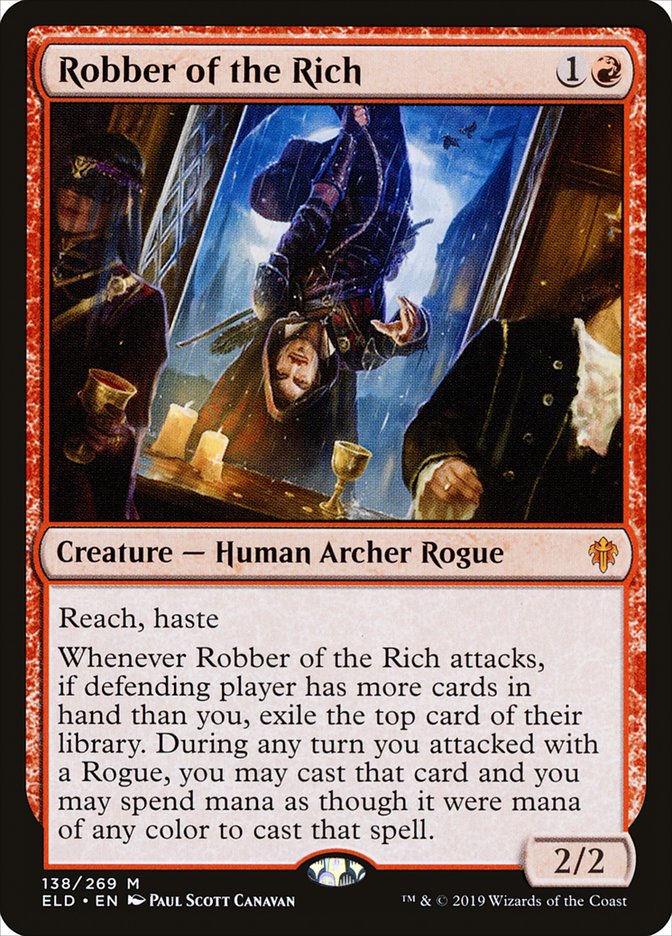 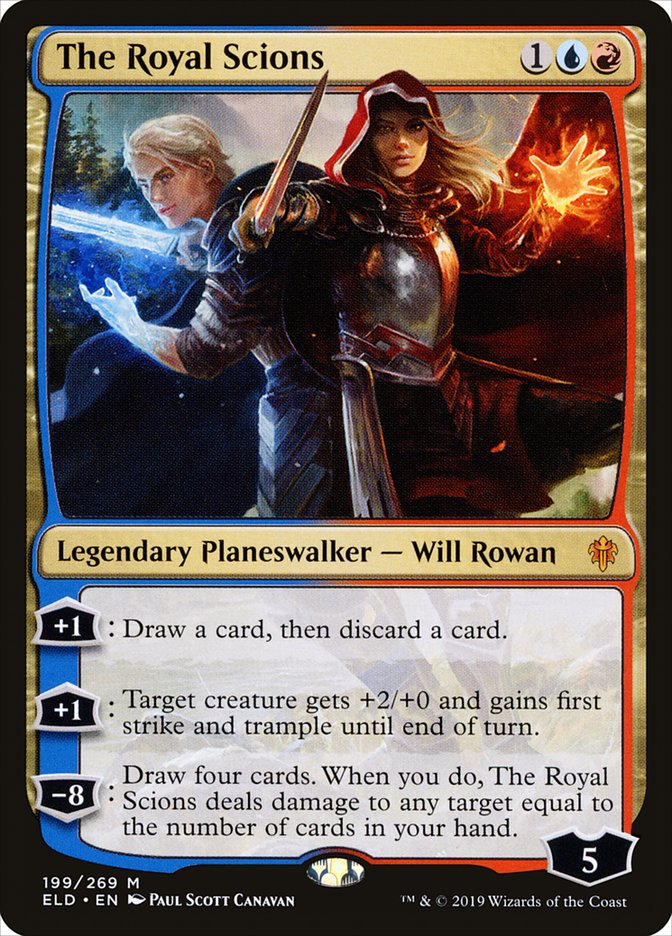 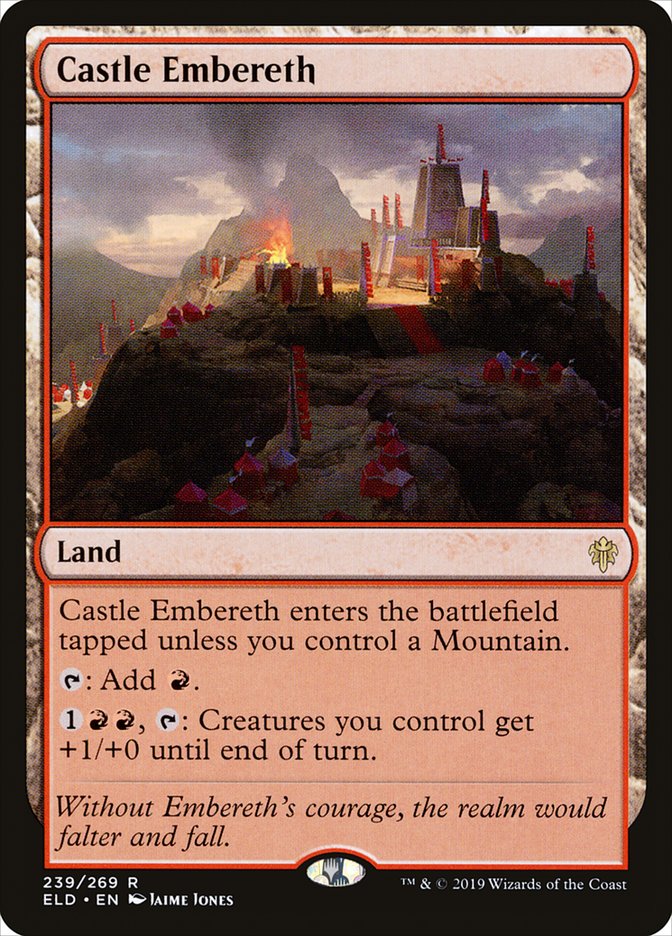 Castle Embereth (and the other castles) are incredible. They have such a
low opportunity cost for inclusion, especially because of Fabled Passage.
Midgames will be fueled by the power of these lands for the next two years.

Since this Izzet deck is going wide with some low power evasion creatures,
Castle Embereth is perfect for this sort of deck and might be the new face
of Mono-Red Aggro alongside Tin Street Dodger and Gingerbrute.

With Grixis, you get to play each of the standout Rogues from Throne of Eldraine, but I’m not convinced it’s worth it. Thanks to
Fabled Passage, we have the ability to play Nicol Bolas, Dragon-God, but
other than that, we’re not getting much out of the red. 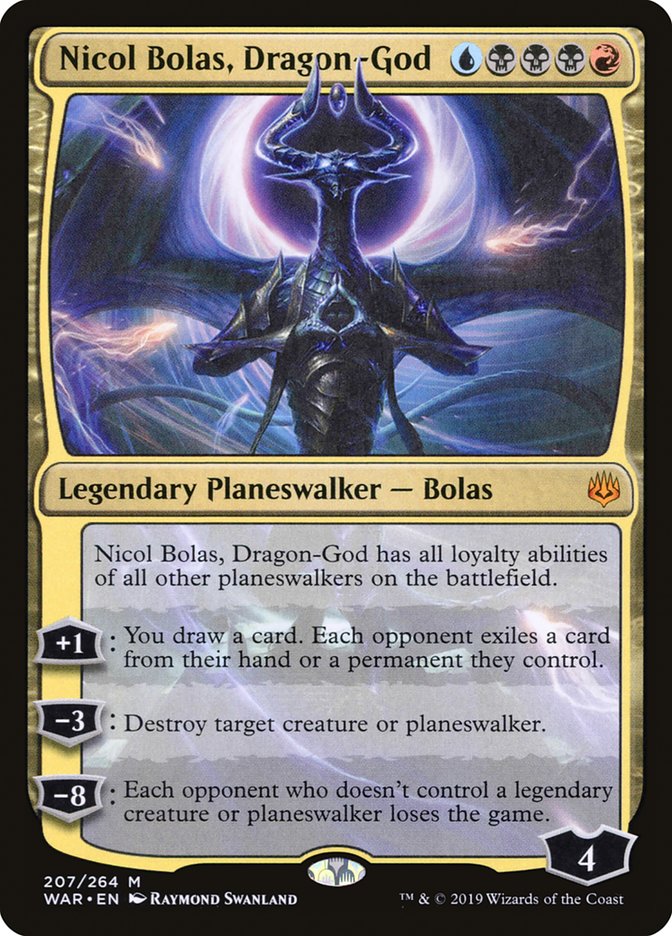 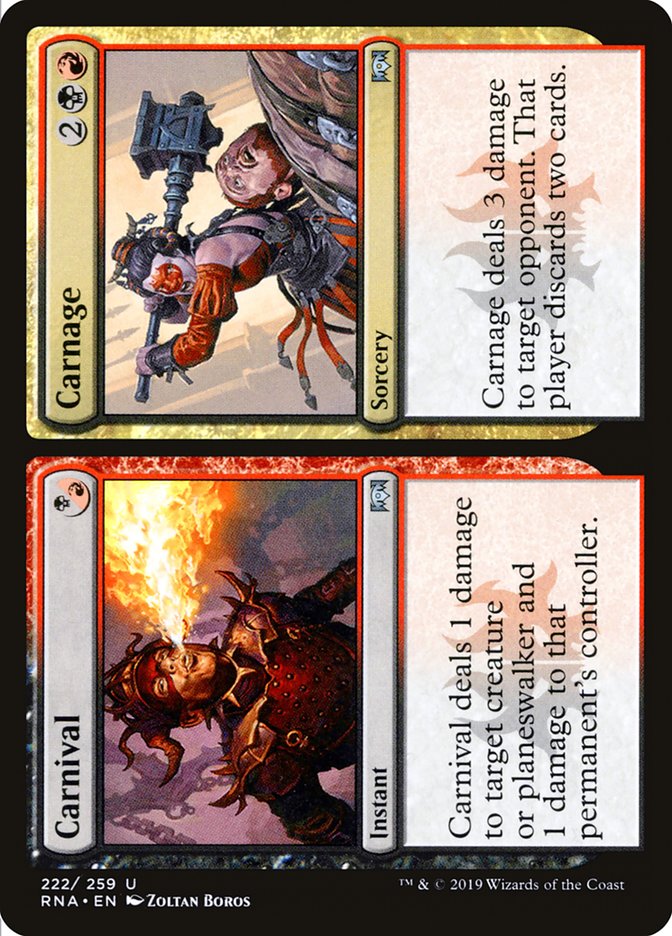 I’m not even sure Carnival is going to be able to kill enough creatures in Throne of Eldraine Standard. Most of the one-drops have a second
toughness, although it does kill Brazen Borrower on the cheap. Assuming
that removal and solid threats is a good place to be, I like Grixis, but
you can probably get what you want from this archetype without having to
stretch into a third color.

A midrange deck seems like a good, obvious home for Brazen Borrower. Dimir
Midrange is adjacent to a tempo deck except that it has more staying power.
You’ll control the battlefield while accumulating card advantage and
eventually switch gears and start pressuring your opponent. Your mana is
good, and your card quality is high, so I wouldn’t be surprised to see many
players start with something like this.

Alright, so Brazen Borrower disrupts and attacks, so it slots into certain
versions of aggro, midrange, and tempo. What about combo?

Murderous Rider and Brazen Borrower form the backbone of this archetype.
Without them, you wouldn’t be able to play enough interaction while having
enough creatures for The Cauldron of Eternity. You could make the case for
Vantress Gargoyle and Emry, Lurker of the Loch instead, and while those two
are a powerful pair, Cauldron wouldn’t be able to work without some
Adventures.

For decks like this, Brazen Borrower is even protection from graveyard
hate. If your opponent has a sideboard Grafdigger’s Cage or even Leyline of
the Void, you can remove it for at least a turn. 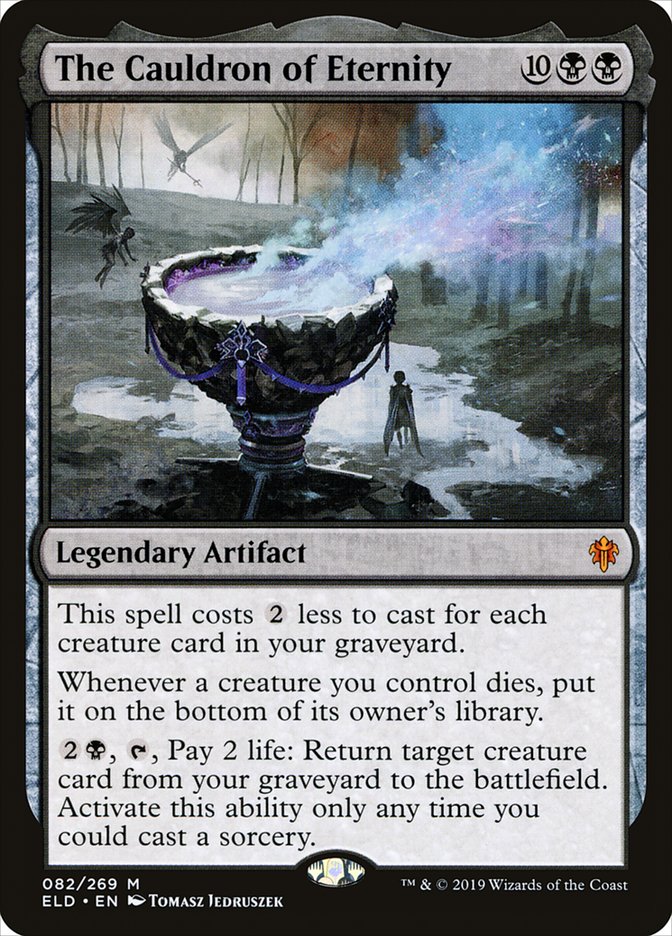 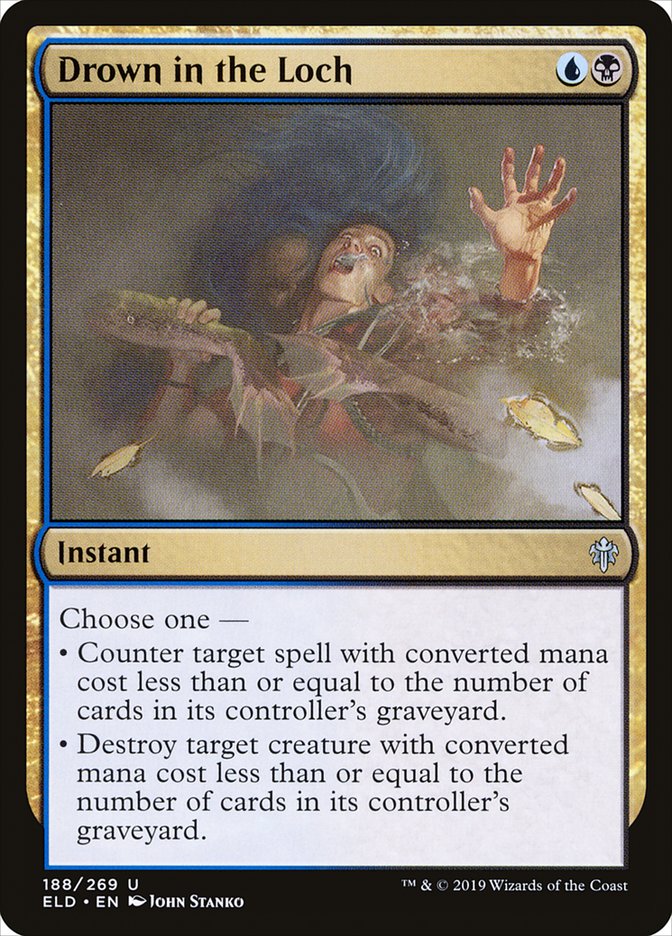 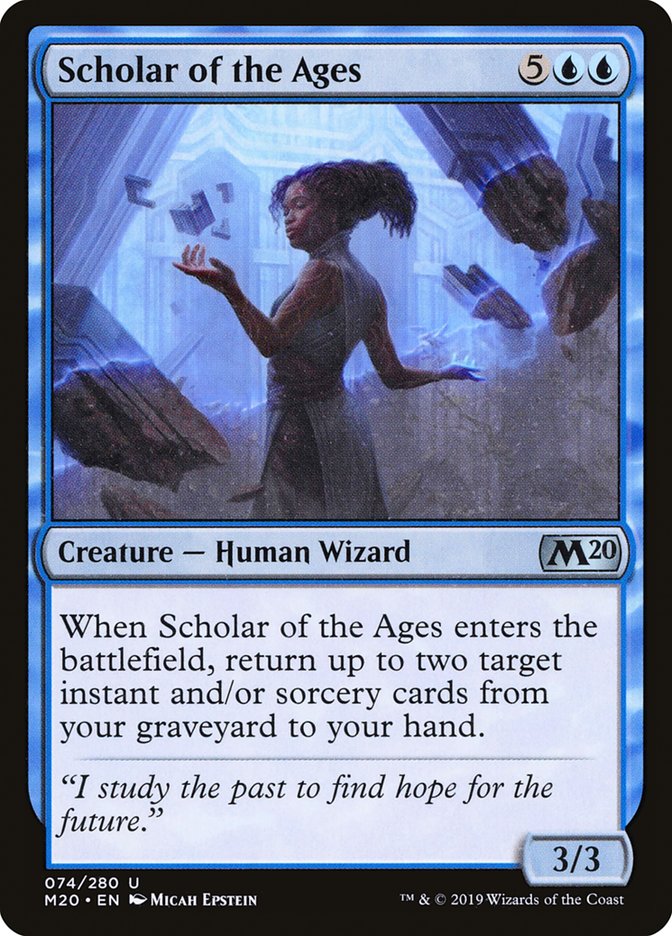 I went pretty deep on this archetype, but those notes will have to remain
buried for another time. Here are some of the other things that could be
great to reanimate with The Cauldron of Eternity:

Loxodon Lifechanter is the best thing to gain life whereas Cavalier of
Flame (alongside something like Witch’s Oven) could be an incredible combo
kill. The rest of this stuff is fine, but ultimately fails to stand up to
the other options.

This is almost certainly not the correct build, but I love everything
that’s going on in this deck. You have Castle Garenbrig to power out a huge
Hydroid Krasis, which then turns on The Great Henge. Additionally, you have
the Food engine of Gilded Goose and Oko, Thief of Crowns, which encourages
you to play Witch’s Oven. That gives you a sacrifice outlet for Cavalier of
Thorns, which can put one of your engines on top of your deck. 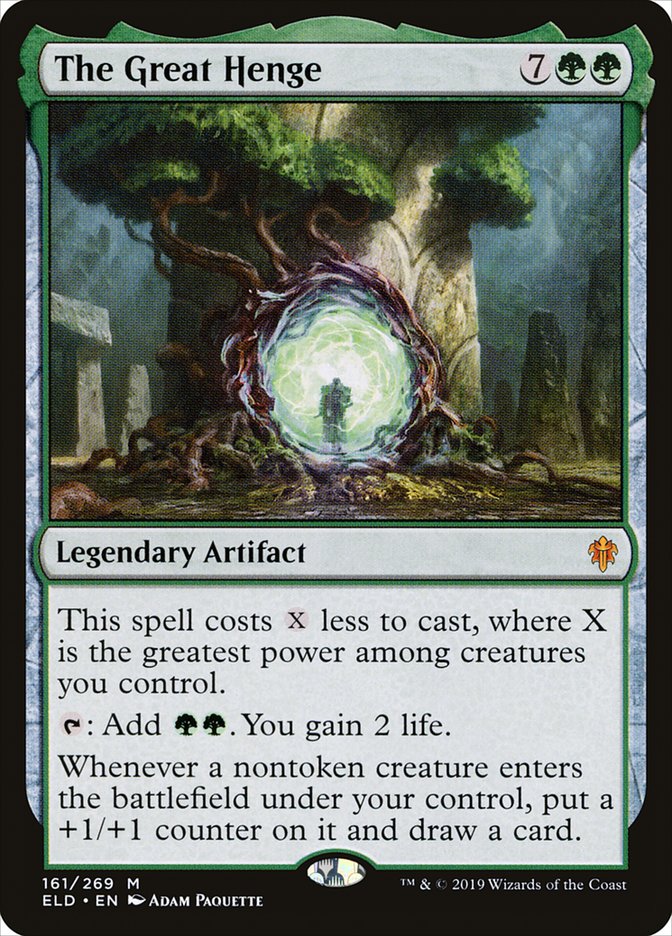 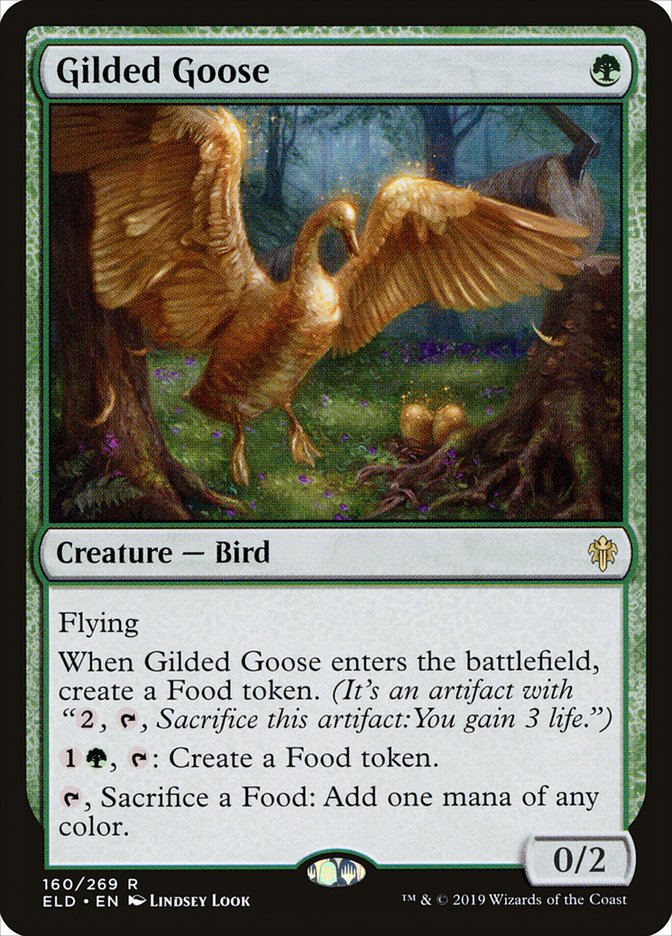 This deck won’t be running out of gas anytime soon and Brazen Borrower and
Wicked Wolf give you some interaction. Of all the archetypes in this
article, this is the one I’m most excited about for competitive play. It
has all the hallmarks of a successful Standard deck.

This isn’t a perfect Hero of Precinct One deck, but it’s difficult to get
there in five-set Standard while utilizing only two colors. Despite that,
this deck still ends up looking solid.

Harmonious Archon is what I wanted to build around because its effect is a
game-breaker in midrange mirrors, especially if you have any sort of token
generation. Castle of Ardenvale and Hero of Precinct One make Harmonious
Archon truly absurd, so the point where I wonder if we aren’t supposed to
be building around Divine Visitation instead.

I started with a more controlling decklist, but ultimately Hero of Precinct
One took over and here we are.

Here are some of the other cards I wanted to include: