The mirror match can be extremely interesting or very mechanical and predetermined. The issue that causes such a large spectrum is that many of the early-turn decisions cause a ripple effect. Take this board state for an example: 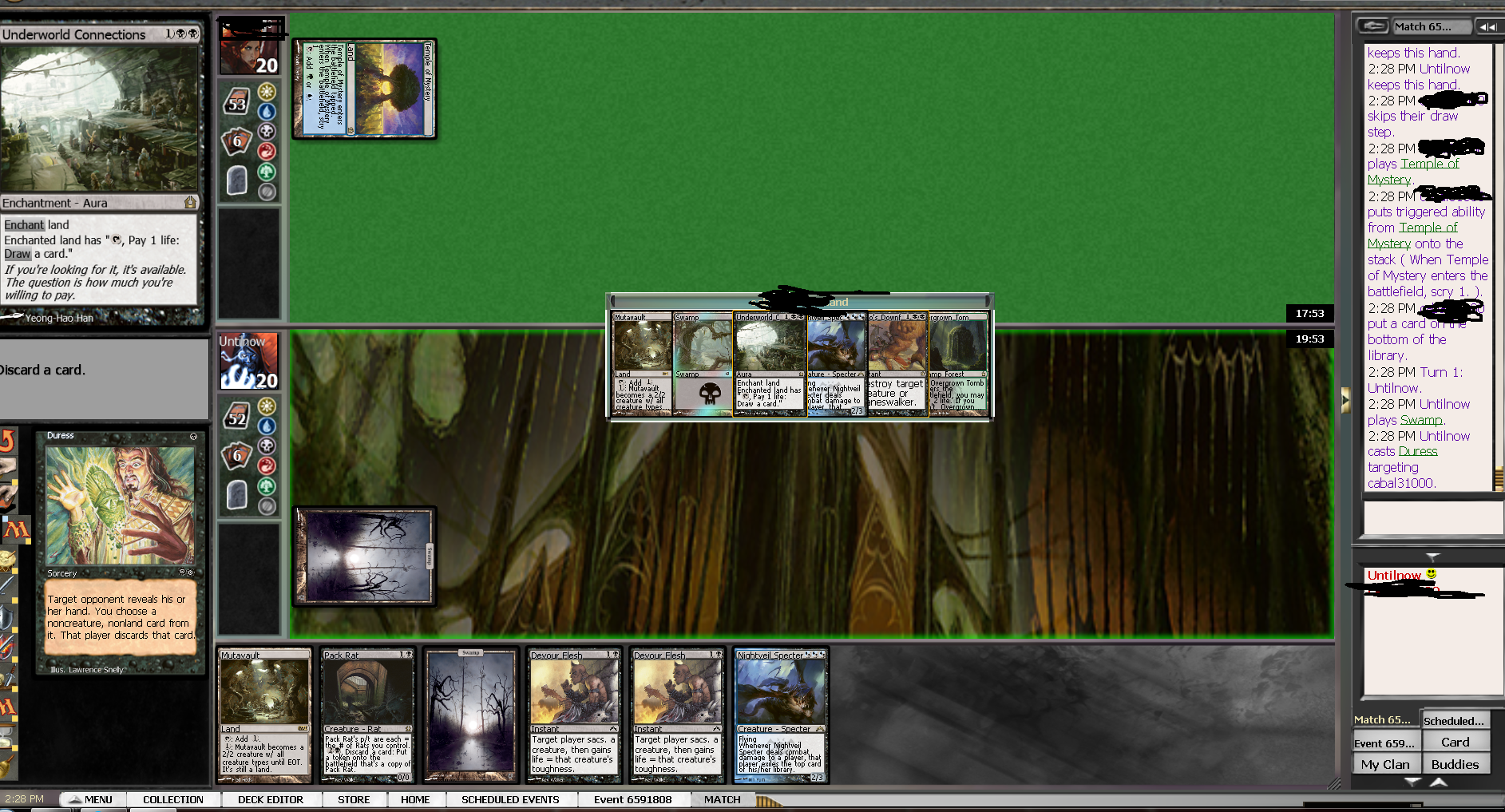 I understand that my opponent is playing the green variant of Mono-Black Devotion, but the decision is still relevant. Our options are to either take Hero’s Downfall or Underworld Connections. On one hand, we can removal the Hero’s Downfall and hope that the opponent’s next two draw steps do not interact with Pack Rat. That means we must dodge Thoughtseize or Pack Rat the very next turn and then the opponent must not draw any removal spell in two draw steps. This is possible, and if our opponent just draws non Pack Rat creatures and lands, we will almost certainly win this game early.

The risk in taking Hero’s Downfall over Underworld Connections is that if he does draw an answer or his own Rat we will almost certainly lose to the Underworld Connections unless our next card can either remove it from the opponent’s hand or we draw one of our own before turn 5 and can keep up with the card advantage.

Both lines have reasonable justifications, but the point of the matter is that this decision will certainly change the entire course of the game. The only way to play this matchup then is to commit to a line and stick to it. It’s always important to do this in Magic, but it’s especially important with how volatile this matchup can be in the early turns. Granted, some games end up stalling out, with our early decisions just trading resources until both players are topdecking.

I believe it is now common knowledge to take Desecration Demon out in the mirror, but I still see some opponents keep it in from time to time. This card is bad in the mirror! Both decks are so full of removal spells due to the power of Pack Rat and Nightveil Specter that they just get caught up in the crossfire. They also never seem to win a game since they may deal damage sometimes but the other cards in the mirror are just so much more powerful.

One place that I have to concede that I was wrong is with Duress. I fought tooth and nail with Todd Anderson about the merits of Duress in the mirror. I was under the impression that too many discard effects would lead to bad topdecks in the late game. This is still true, but they are also very important at protecting your Pack Rats and disrupting their Underworld Connections.

This matchup is all about board presence. Whether it’s Underworld Connections drawing too many cards for the opponent to keep up or Desecration Demon dealing damage in chunks, you have to get permanents on the board while controlling theirs. Mono-Blue Devotion is most powerful when it controls the board. It can gain tempo and card advantage at the same time, making it very difficult to stop the snowball once it gains velocity. Playing too controlling will result in Thassa, God of the Sea or Jace, Architect of Thought taking over the game.

Thoughtseize plays a unique role in this matchup after sideboard. On the draw, it’s important to have enough answers in the deck for cards like Thassa, God of the Sea; Jace, Architect of Thought; and Bident of Thassa. We don’t have enough time to get a good enough board presence to combat them in the red zone, so the Thoughtseizes play a more important role here. This isn’t the case on the play, when we can get an overwhelming board position going.

This logic comes down to an amazing article Reid Duke wrote a couple months ago about Thoughtseize. The cliff notes from this article are simply that one-for-one hand disruption will oftentimes drag games down since both players are losing resources in the initial turns. This logic is used here in the sense that I will not be able to control the pace of the game when on the draw if I don’t start one-for-oneing my opponent as quickly as possible. Thoughtseize is not extremely effective in this matchup, but it is a necessary evil to not get stuck one-for-oneing them with only removal spells. This leads to Thassa or Bident taking over the game.

On the play, I want to be aggressive and lean heavily on my creatures. The one Dark Betrayal comes in since it’s a highly efficient removal spell but only targets Nightveil Specter. This creature is the most effective way of keeping our own Nightveil Specters at bay, so it often has a large target on its head. It’s okay to play high-variance cards in situations like this since we’re pressuring our opponent with Pack Rat and can simply discard it once our opponent proves they will have to topdeck a Specter to have it see play.

Game 1 is pretty straightforward. Try to disrupt them early and stick Underworld Connections or Desecration Demon. The rest of the arsenal is fairly weak against them since their creatures are so massive.

Our creature base isn’t the strongest against them, so we have to try to get aggressive. Hand disruption is great in this matchup since they are fairly threat light but pack upward of ten planeswalkers. Xenagos, the Reveler is especially potent if we don’t draw Lifebane Zombie since it holds Desecration Demon at bay.

This might come to a surprise, but I have never seen Pack Rat or Nightveil Specter do anything on the draw. I have found more success with playing a controlling game against them. The reason why this can be successful is that they run a large amount of mana accelerants. This can help them get ahead on the board early but also cause them to be very threat dense in the mid to late game. This is why I take a controlling role and hope to take over the pace of the game with hand disruption, Underworld Connections, and removal spells. Gray Merchant of Asphodel plays a much larger role in these games since the life gain is essential when we are pulling away with an Underworld Connections.

Game 1 tends to be much more difficult than sideboarded games. We have ten two-drops in our maindeck that are all relatively dead in the matchup. Sure, Pack Rat can get in a few points of damage, but they have Azorius Charm, Detention Sphere, and Supreme Verdict to ruin the fun. We need to get an Underworld Connections going fast to keep up with the deck in game 1. The problem is Mono-Black often wants to keep any hand with a two-drop and it’s too late to mulligan once our opponent plays Hallowed Fountain.

Owen Turtenwald’s list from Standard Open in Indianapolis was set up perfectly to take out all ten two-drops, but we don’t have that luxury. G/R Monsters has been picking up in popularity, causing the need for Doom Blades in the sideboard. This means they will be “dead” cards most of the time.

The only suggestion I can make about this matchup is to not recklessly use hand disruption. The games go long, and it’s okay to hold one for multiple turns until you need the information. The only time I play them in the early turns is if I’m trying to resolve an Underworld Connections and want it to stick.

This matchup is very similar to G/R Monsters in the sense that they have powerful creatures and try to assemble a board position. The only difference is they have a great answer for Desecration Demon in Chained to the Rocks. The best way to play out game 1 is to try your best to set up control with Underworld Connections and Gray Merchant of Asphodel. Most of their creatures can be brick walled by Nightveil Specter, so it’s important to save pinpoint removal for Stormbreath Dragon.

Things can get out of control very quickly since their deck has four Nykthos, Shrine to Nyx, so it’s almost always more important to kill a creature then play spells like Pack Rat or Underworld Connections unless you can activate the Rat or draw a card off the Swamp.

Duress is not needed for this matchup since they only have removal spells and Hammer of Purphoros as targets. Hammer can be problematic, but it’s not as bad as the planeswalkers presented in the G/R Monsters matchup. Just kill everything on sight and try to land a Desecration Demon after sideboard. They also function similarly to G/R Monsters in the sense that many of their cards are less impressive as the game goes on. Just hope they never stick a Purphoros, God of the Forge before you find a Desecration Demon or they might just Shock their way to victory.

This might be the worst matchup for the deck. They not only have Selesnya Charm as a combat trick for Nightveil Specter and removal for Desecration Demon, but they’re also fast enough to almost always invalidate Underworld Connections and have Voice of Resurgence!

This mythic rare is the bane of Mono-Black Devotion’s existence. Not only does it force you to use removal spells on your own turn, but it makes playing Desecration Demon a liability. Make sure you cast Desecration Demon on your second main phase whenever there is a Voice of Resurgence in play since you don’t want them to have the option of sacrificing it and then attacking with a large Elemental token.

The same logic behind the G/R Monsters matchup applies here as well. You want to be aggressive and control the board on the play since it’s possible there, but the draw is another issue. They will often be too fast for you to catch up, so hand disruption is the key to running the opponent out of gas.

It’s almost time to say goodbye to Theros Standard. You were good to me while you lasted, but I’m ready for a new set to shake things up a bit. Next week I’ll be going over Born of the Gods and hopefully talking about how we can all start using this bad boy: 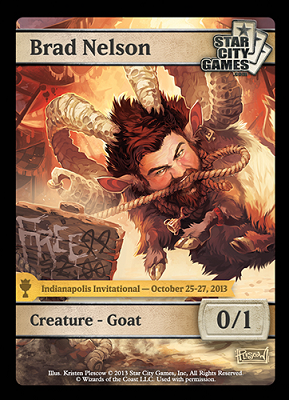