Grand Prix Santiago was a tournament full of surprises.

Honestly to me the biggest surprise is that Mono-Blue Devotion continues to show such legs in Standard. The archetype was obviously powerful around the time of Pro Tour Theros, but decks of that type—aggressive but lacking reach or alternate angles to victory, blue but largely guileless (their secrets or lack thereof now revealed), capable of tapping mana early but not oppressive in their offenses—rarely stick around as The Deck to Beat long. But three out of eight in a Grand Prix Top 8 is certainly a tip of the hat for continued viability.

Obviously this deck draws on a lot of the things that make the more familiar Mono-Blue Devotion tick. Cards like Nightveil Specter help build blue pips on the battlefield, as does Jace, Architect of Thought. In fact, this deck upgrades the Mono-Blue Devotion deck’s use of Jace to a four-of from zero-to-two main.

U/W Devotion has a very different mana situation than most Mono-Blue Devotion decks. To begin with, it plays cards like Azorius Guildgate! Azorius Guildgate enters the battlefield tapped and enters the battlefield tapped on the first turn. The one mana "tax" required to diversify this strategy’s color base moves it away from the flying one-drops that make Bident of Thassa so effective for the more aggressive cousin.

It probably goes without saying that Nykthos, Shrine to Nyx is one more reason Salvatto shied away from the usual eight one-drops. But on balance, U/W Devotion can do many and more interesting things with its actual devotion to blue than the strategy named for that mechanic.

Hitting the mana for an overloaded Cyclonic Rift is something that Salvatto could do with his legendary land. He could slow down the opponent with Omenspeaker and Claustrophobia, maybe slide into Jace, Architect of Thought . . . such that Aetherling (with at least U ready on D) becomes a realistic sequence.

But of course the big payoff is Sphinx’s Revelation.

This deck can draw cards.

Its defense draws cards. Omenspeaker sets up your next turn or two. Jace, Architect of Thought can alternate between defense and drawing. Ultimately it can be about trading one-for-one (or at least lining blockers up one-for-one) . . . and then go very big with Standard’s ultimate parity breaker.

Though offensively slower than most Mono-Blue Devotion decks, U/W Devotion can present a number of strategic wrinkles even beyond the Revelation payoff:

Say what you will about the persistent appearances of Esper Control variants or even newcomer U/W Devotion . . . to this writer the weekend past was largely the story of attack decks. These aggressors came in several colors, but I think the most surprising was the GP Santiago winner.

This deck is highly unusual not because of its overall strategy—in a sense this is a direct inheritor of last year’s B/R Zombie decks—but because of its card power. There are quite a few head-scratchers and eyebrow-raisers in this list. None more unusual than . . .

A 2/2 creature for three mana is not exactly the model of a creature your aggro deck wants to write mommy about. Though it has some Goblin Chariot to it, Mogis’s Marauder really smells and feels like Scathe Zombies, don’t you think? But here’s the thing: as we said a moment ago, Standard today is a format where many decks only know how to build advantages by committing to the battlefield. When two creature decks under this same stricture meet, the board can stall into a standoff. You can easily have lethal damage in play . . . but might not be able to make a profitable attack. All of a sudden a Scathe Zombies that can give a bunch of your creatures intimidate can set you up for a one-turn Alpha Strike kill.

The first time I saw this card getting some serious hype it was Brian Kibler Jund-colored Kalonian Hydra deck; straight B/R is a far cry from that powerhouse. What is even more interesting from my perspective is how little synergy Exava has with the rest of Navas’ deck. Sure, it is a Human for Xathrid Necromancer; sure, you have the odd Rakdos Cackler. But this is mostly a creature that is crashing for four on turn 4 basically on its own merits.

The presence of Madcap Skills actually gives value to the heroic on this otherwise somewhat-underwhelming combat creature.

You are going to tend to want to side in Burning Earth only in spots where you have a life advantage and/or the opponent can’t help but play in such a way that they will consistently get mugged by that enchantment. This deck’s eighteen lands allow you quite a bit of flexibility in that regard.

Quite curious to see if B/R can sustain its Grand Prix performance at any scale in subsequent weeks.

There were lots of big Standard tournaments this weekend past, including not just a Grand Prix and our own StarCityGames.com Standard Open but a 50K in Columbus. This was a multiple-format tournament with both Standard and Modern; for purposes of today’s article, I’m just going to talk about their top Standard performers:

But in addition to Mono-Blue Devotion, this tournament showcased a couple of additional interesting and viable aggro decks.

Brendan Reginbald played a Mono-White Aggro variant that basically splashed black for Orzhov Charm (and Sin Collector out of the sideboard).

This is about one spell slot from the Level Zero White Weenie deck: Judge’s Familiar and Imposing Sovereign, some power, some crossover with other archetypes. There is a battalion subtheme, with Mutavault setting up Daring Skyjek. But the most unusual—arguably only unusual—choice is Orzhov Charm. Orzhov Charm is one of the most versatile cards in the format, clearing blockers, saving creatures on the battlefield, and even rebuying certain ones.

Cucunato’s straight black aggro deck shares some cards we’ve seen in other lists but not really in this combination.

It plays both Rakdos Cackler and Tormented Hero as a redundant eight pack of 2/x one-drops.

Thrill-Kill Assassin shares the two with Mono-Black Devotion’s recent darling Pack Rat. Now that Pack Rat is acceptable to play in Constructed, it is also apparently fine to promote to four-of! Given sufficient mana Pack Rat is potentially unbeatable (at least as long as we are not talking about Supreme Verdict or Cyclonic Rift).

Then at the three and four we see Nightveil Specter (borrowed perhaps from Mono-Blue Devotion) and Desecration Demon (borrowed from pretty much every black board control deck) respectively. These latter two are both evasive creatures and "just good" ones with some potential built-in card advantage plus some obvious cross-archetype appeal. Given their evasion these flyers can make for effective cleanup/finishing cards after the lower end of the curve has beat up the opponent a bit.

The rest of this main is made up of Thoughtseize and removal spells—very, very good removal spells. Hero’s Downfall is quite impressive, especially given the inclusion of planeswalkers in control (everything from Ashiok to Elspeth in Esper), and Ultimate Price gets the nod over maindeck Doom Blade given among other things the viability of decks that play Pack Rat or Desecration Demon.

While it’s not flashy—24 lands, all four-ofs, a 4/4/4/3 sideboard—there is something compelling about Cucunato’s absolute certainty in his card choices. This deck has some angles (perhaps most importantly the inevitability of Pack Rat, but also the conditional card advantage of Nightveil Specter) but can push tempo with greater speed and access than the other decks that play these cards.

And really, who’s going to block a Thrill-Kill Assassin? 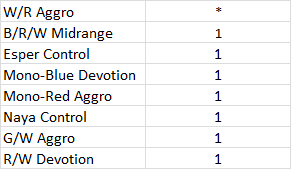 The top finisher and overall ace of #SCGLA was a White Weenie Weapon of Choice by the great Benny Beatdowns:

This deck is similar to the W/B Aggro deck we looked at a section or so up but further evolved even beyond the choice of Boros Charm over Orzhov Charm.

As detailed in his article from earlier this week, Benny Beatdowns had no interest in playing cards like Judge’s Familiar. He switched that up for Boros Elite. While he respected a Banisher Priest, Ben chose Frontline Medic over it. These cards in concert with one another and with drops like Daring Skyjek make all the battalion with Mutavault and shorten the clock even more than in other builds; of course you have Boros Charm as a potential finisher as well.

The drops—in particular the one-drops—in this deck are extremely strong. Soldier of the Pantheon and Dryad Militant can both get the ball rolling quickly. Azorius Arrester is a mite unusual but is being played here over the more commonly seen Imposing Sovereign. Ben’s thinking here was compelling. You don’t necessarily want to sequence Imposing Sovereign to the detriment of playing a Precinct Captain . . . and then not get in for anything because the opponent has a superior blocker now untapped.

With Azorius Arrester, he can get much the same value but reduce his likelihood of making the wrong play.

I don’t know about you, but to me this Standard is compelling like few others. You can do all kinds of stuff if you just put your shoulder to the preparation. Brad Nelson and his Naya Control deck was just a first step. White Weenie? Three or four different kinds are waiting for you . . . without even tapping the mono-blue one. Sphinx’s Revelation? Are you interested in lockdown control or kinda sorta beatdown?

It’s been a while.