If I click my heels, will it come true?

I took the two-hour trek up to Orlando with my girlfriend Allie and my buddy Kyle to hopefully win another PTQ. This PTQ was one of the first of its kind, as it was also a 2K and would be paying cash down to sixteenth place. It’s pretty cool that the winner gets $500 in addition to the invite and plane ticket. You can use the winnings to pay for the hotel, essentially making it a free trip.

Upon arrival, we did the usual catching-up with players from other parts of the state. I found a couple of old-school players that I hadn’t seen in some time along with an old local friend. One of the main draws to going to events like this is just simply seeing friends you’ve gained over the years of playing the game we all love. You’ll find these friendships extend past the game. As always, though, the catching up ended ever so abruptly as the tournament was ready to kick off! 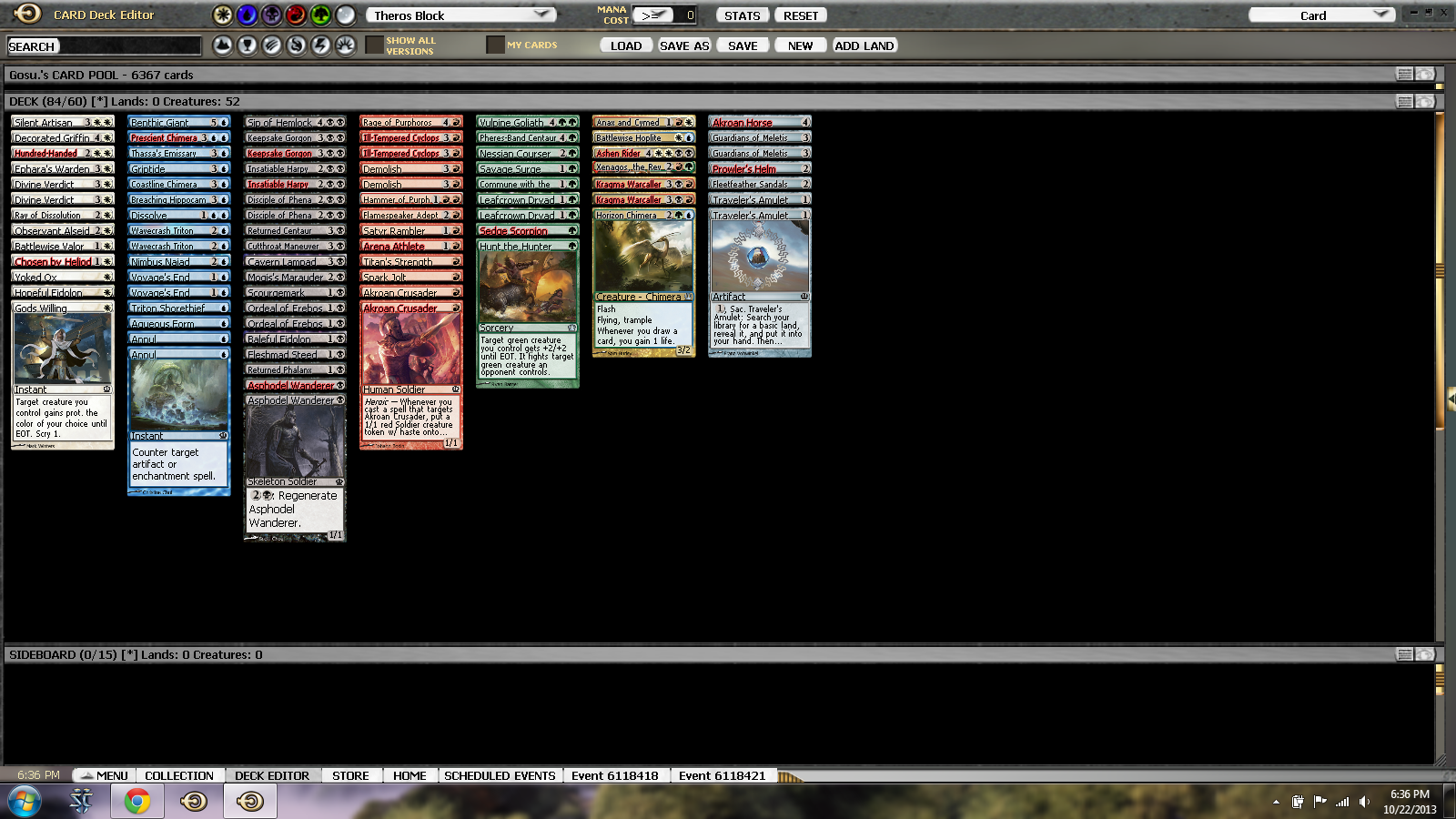 After sifting through the cards for a while, I came to two options. The first was B/W: 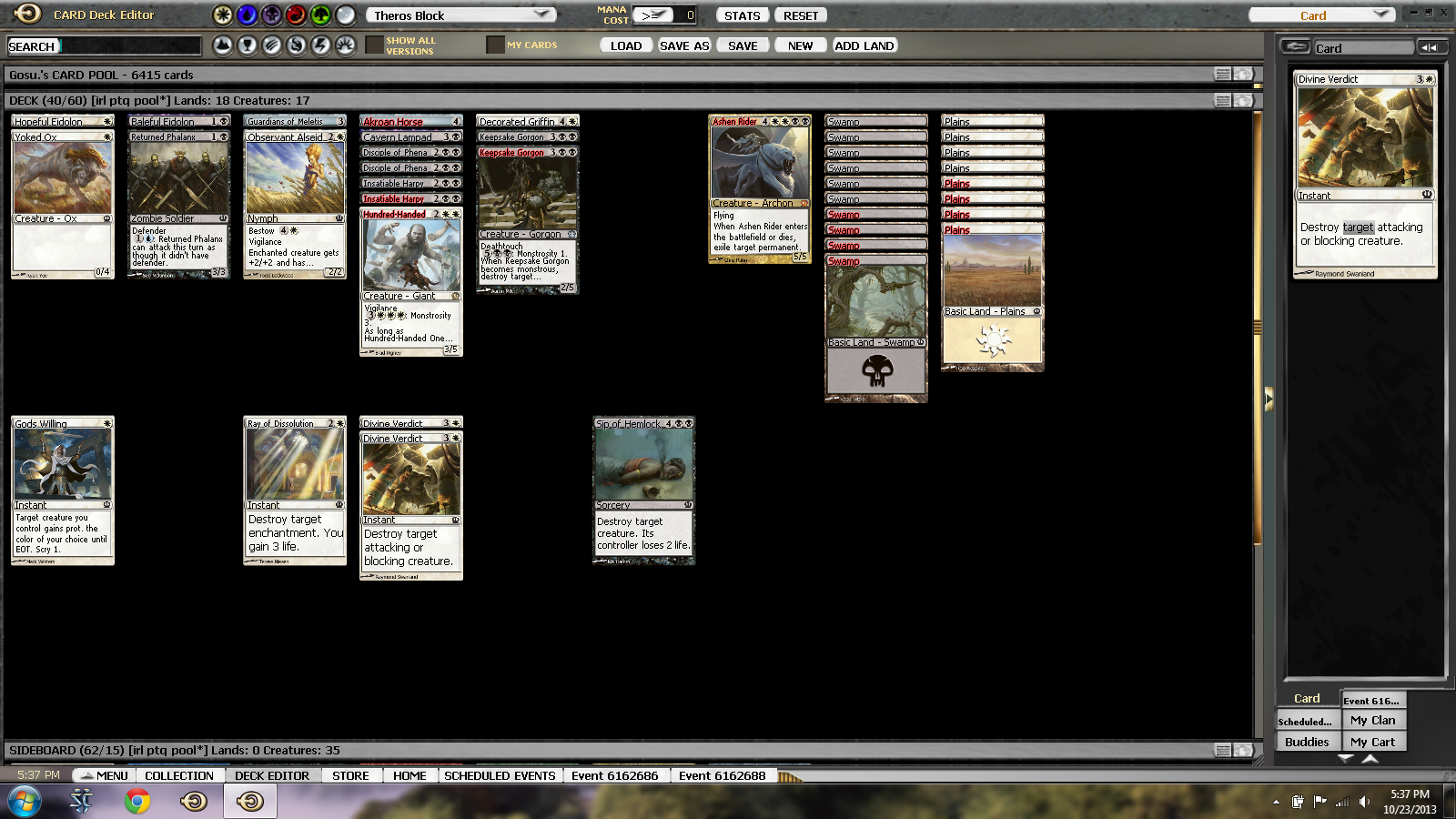 This deck offers a solid late-game plan and a decent amount of removal. Other than that, however, it doesn’t have much appeal. We’re forced to play some not-so-great cards like Decorated Griffin, Guardians of Meletis, an off-color Returned Phalanx and Yoked Ox main. For these reasons, I opted to stay away from playing B/W and give B/G/r a shot: 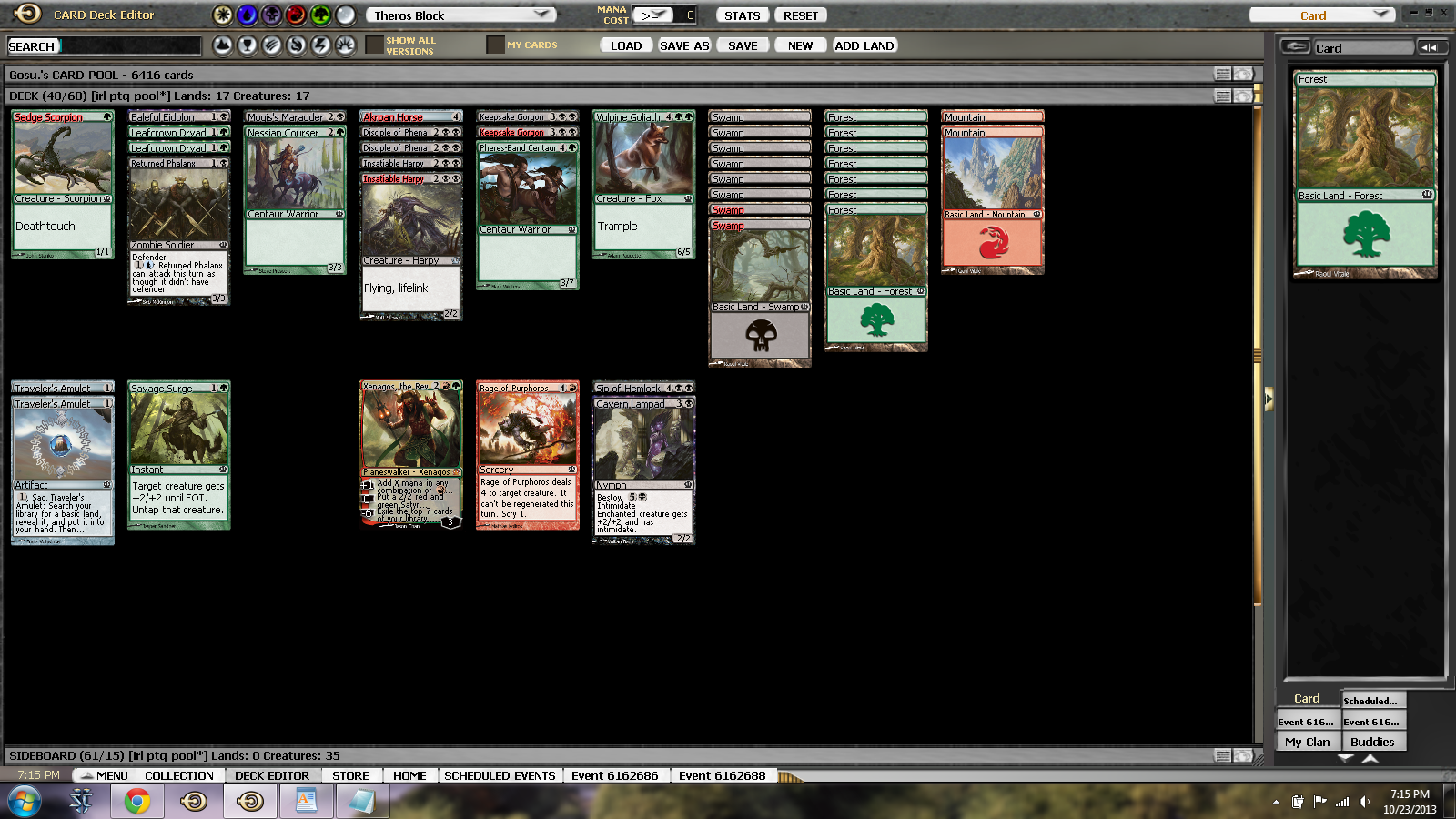 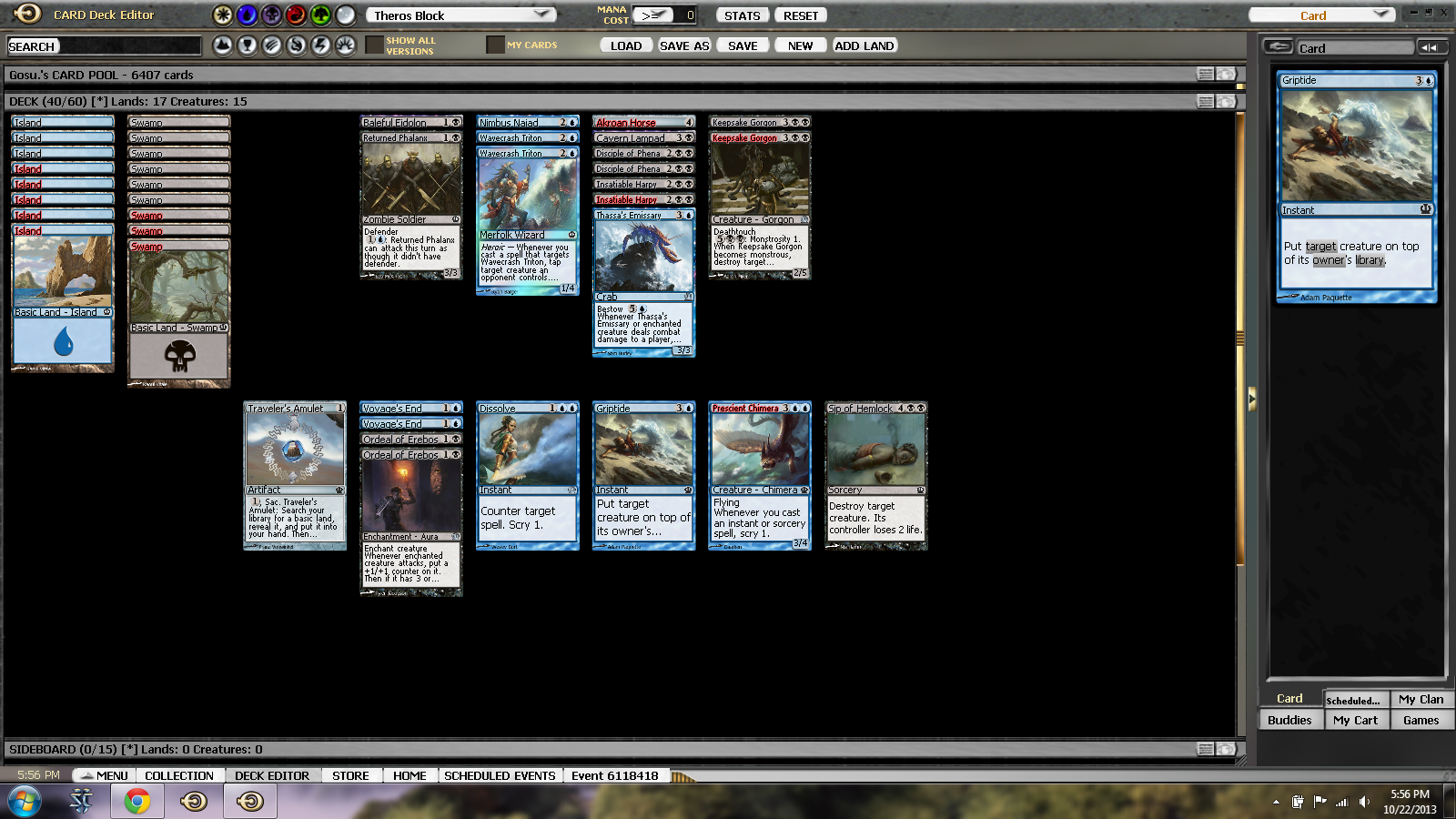 What I finally opted for was a U/B control deck. We have access to a lot of bounce, permission with Dissolve, and we still get to have real removal with Keepsake Gorgon and Sip of Hemlock. The gameplan here is just to survive until the late game and deny our opponents’ threats by taking them out of their hand or just simply bouncing or killing them from the board.

I got to play against a three-color monstrosity that contained Arbor Colossus, Pharika’s Cure, and Prognostic Sphinx. His deck had some nice mana but it never really was a problem for him as we played a close three games and I snuck out a win.

This was my opponent’s first non-FNM event. It showed, as he played a hard three-color devotion deck with a lack of targeting cards. Unfortunately this would be my round to have mana issues, and I ended up picking up my first loss.

Getting back on track and staying focused after a brutal loss is very important. I aimed to do that here, paired against a solid R/W deck. His deck came out fast but I managed to stabilize at a safe life total and took over for the eventual win. The second game was a nail biter, as he pressured me quickly just like in the first game. However, he made a few gameplay errors that made it much easier for me than it should have been in the end. 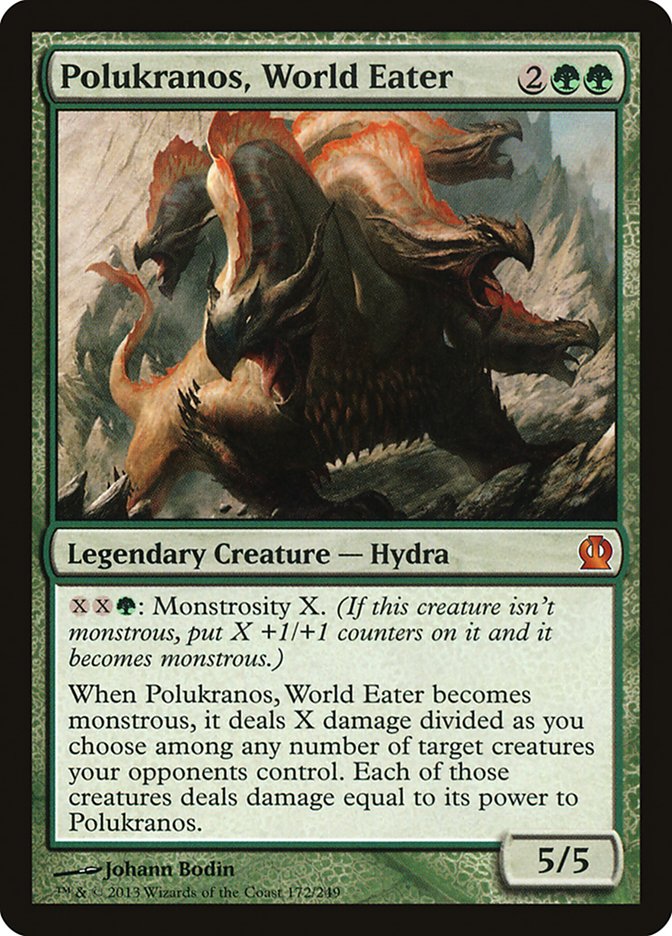 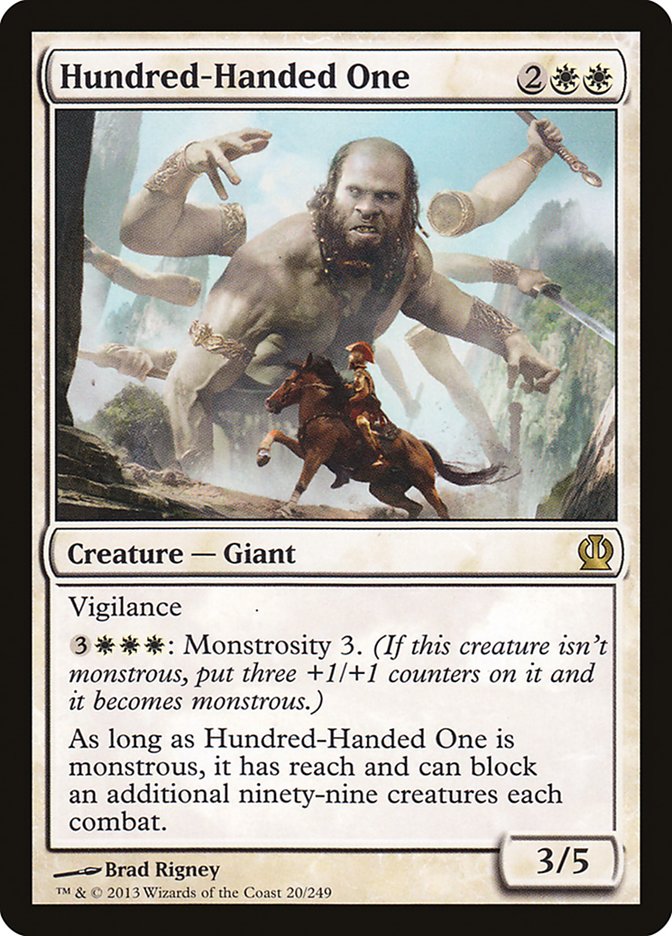 “Sure, sometimes your opponent will just have a card pool that is nearly unbeatable. You can’t really prepare for that and just have to take your beats when they come.“

Unfortunately, that came very early in the tournament for me. I drowned my sorrows in another PTQ the next morning via Magic Online where I got another Xenagos, the Reveler… and this time I got to actually play with it! I got to round six before I had received my second loss. With the event being eleven rounds technically I had a shot at Top Eight, but the event crashed after round seven and was cancelled.

The Invitational is this weekend, and I’m sad to report I won’t be able to attend. Someone else at work already has the weekend off and we can’t overlap vacation days. I can, however, share what I would be playing if I was going this weekend.

It’s no secret I’ve been advocating Jund for about a month now. Since then, Mono Blue Devotion and Mono Black Devotion have dominated Standard at the highest levels. As such, I would expect these two decks to be a high percentage of the field and I wouldn’t play a deck incapable of beating them. If I was going to the Invitational this weekend, this is the 75 I would submit today for the Standard portion:

The Legacy portion, well, that is a little more complicated. Since I knew I wasn’t going, I didn’t put as much effort in to testing as I would if I was going. I’d either be playing a Merfolk list with Master of the Waves or some variation of the Painted Peace combo deck that was in my article a couple of weeks ago.

If you’re going to the Invitational, I wish you the best of luck. If not, make sure you check it out live as we watch the metagame evolve right in front of our eyes. Instead, this weekend I’ll be going to a Halloween Party. Bill from Trueblood is my metagame choice, with my girlfriend going rogue as Sookie. What do you have planned for Halloween?