In 2016 Wizards of the Coast (WotC) released a set of five four-color Commander decks and it was quite ground-breaking. It introduced the controversial partner mechanic, and it also gave the world the first batch of four-color commanders. 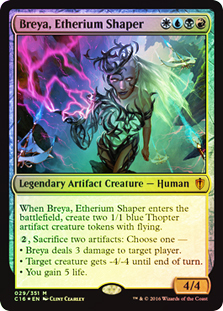 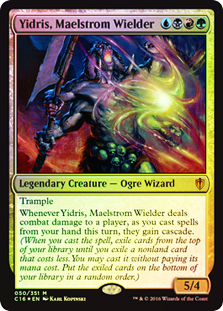 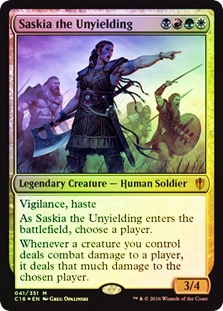 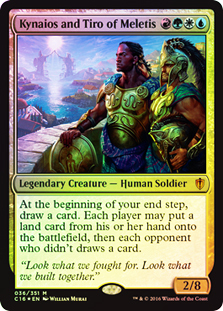 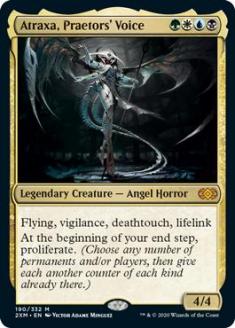 I’ve built Commander decks around all of these commanders except for Atraxa, and I have kept Saskia and Kynaios and Trio (K&T) in paper over the past five years.  K&T has grown to become one of my favorite decks to play over the years, and has undergone a lot of changes; if you’re curious to see its original incarnation, you can check it out here.

One thing that hasn’t changed is how amazing K&T’s end-step trigger plays out each game. For me, the best kind of Commander games are ones where everyone has a chance to implement their gameplans, there are lots of swings back and forth as to who has the advantage and lots of interaction, and at least a couple of big splashy haymakers before the game comes to its conclusion. If everyone gets to “do the thing” that their deck does, then everyone wins!

One thing that’s not fun is when someone stalls on land drops or runs out of gas and just sits there while everyone else gets to play, and K&T’s ability helps smooth that out. Everyone loves drawing an extra card (or, on the rare occasion, making an extra land drop), so that combined with a very non-threatening two power means that K&T will very rarely draw targeted removal spells and will stick on the battlefield a good long time.

The beautiful thing though is while it feels like everyone is benefiting from K&T’s trigger, I’m benefiting just a little bit more—that occasional extra land drop isn’t nothing, and eventually can add up to a substantial mana advantage without investing a ton of card slots to actual mana ramp spells. Being able to invest less space to actual mana ramp spells means that I draw more action cards over the course of a game than a typical Commander deck, though I’ll want to ensure that I’m playing enough lands to get full advantage from as many triggers as I can.

Okay, let’s break down what I have in my deck!

One thing I quickly noticed after playing a handful of games with K&T is that the games tended to go long, and everyone had a lot of lands on the battlefield in the end-game.  This makes Treacherous Terrain a fantastic finisher against many opponents, especially if I have some ways to use it again.  When Surge to Victory came out this year, I knew I had to make room for it in this deck. Not only can this make a modest battlefield presence into something to be feared, but if even one or two creatures sneak through, getting to cast a big spell like Treacherous Terrain again is just the kind of haymaker play that either wins the game outright or at least makes a heckuva story you can tell over and over again.

Adding Surge to Victory to the deck meant that I wanted to increase my number of “big spells” that would be awesome to target with the spell, and in the course of buying set boosters from Strixhaven I opened some really cool-looking Mystical Archive spells including Approach of the Second Sun and Time Warp.

An earlier incarnation of this deck ran Approach of the Second Sun, but I almost never cast the spell the second time and eventually took it out. With Surge to Victory it can get a third chance of use by giving my team +7/+7 until end of turn and gain me seven life for each unblocked creature. Time Warp is another card I almost never play in Commander but the Mystical Archive version is way too pretty not to play, it fits the bill as a good Surge to Victory target, and at least my opponents get to take advantage of an extra trigger from K&T.

Soulfire Grandmaster joined the K&T lineup at the same time as Treacherous Terrain—giving that spell lifelink and potentially putting it back into my hand when it resolves is exactly the sort of big splashy play that will quickly resolve a game. Rootha is a new addition that seems like a perfect fit for this version of the deck with a higher concentration of big spells.

Over the past couple years WotC has put out a fair number of cards that care about drawing your second card each turn. Given that my commander does exactly that, I’ve peppered quite a few of those into the deck, particularly ones that make token creatures like Mad Ratter. Jolrael, Mwonvuli Recluse also has a great late-game mana sink ability that can turn a bunch of small token creatures into an offensive machine.

I’ve also included some other cards that will let me draw an extra card in case something unfortunate has happened to my commander, including the awesome alternative art version of Triskaidekaphile I got from my Innistrad: Midnight Hunt bundle. I’ve also included a foil Godzilla, Doom Inevitable version of Yidaro, Wandering Monster just because I love the art so much and have high hopes to eventually cycle it four times in a game.  When it finally happens it will be awesome, even if it immediately bites a Swords to Plowshares!

With the higher number of lands and land drops, I wanted to pepper in some ways to take advantage of that.  Thrasios and Radha are both awesome mana sinks, and Blackblade Reforged can make any legendary creature into a sizeable threat (and, for a little more mana, it can equip any creature).

The modal double-faced cards (DFCs) from Zendikar Rising like Sea Gate Restoration are the perfect additions to this deck, increasing the density of land drops early on while later on being an action spell instead.  I also wanted some ways to pick up these lands later on to use the spell side, which is where Trench Behemoth and Mina and Denn, Wildborn shine.  Even if I just want to pick up another land just to activate the ability, K&T’s trigger can quickly recover from losing that land drop.

I like to have lots of removal options available and this color combination has a lot of great options. I’ve included a lot of the best ones here, including new favorite Outland Liberator, which can potentially transform and munch on an artifact or enchantment each time it attacks.

I’m always a big fan of interaction in Commander and there are a ton of great options in this color combination.  I really like Selfless Spirit and Linvala, Shield of Sea Gate since they provide resistance to battlefield sweepers, including our own. They also recur quite nicely with an attacking Sun Titan!  Primal Command is a recent addition to go along with Path to Victory since I also have a Mystical Archive version that looks really cool.

Outside of Sol Ring, the mana ramp I did include were cards I could play early to help fix my colored mana to try and get K&T online quickly.

I rounded out the nonland slots with a bunch of cool creatures, most of which are legendary because they have cool abilities and can also easily pick up Blackblade Reforged. I like playing the Hakka, Whispering Raven side of Alrund for the scry ability early on, but the front side is no slouch a little later in the game. Delina is a new addition I haven’t drawn yet but I’m looking forward to its ability to copy some of the nifty creatures in this deck.

Shalai, Voice of Plenty has been in and out of the deck over the past couple of years, but once I got the Black Is Magic Secret Lair drop, I couldn’t resist moving the new artwork version into a permanent spot in the decklist.

The bouncelands from Ravnica block have long been a staple of Commander decks by providing a way to squeeze an extra land into one land slot.  I don’t see them as much these days because the typical Commander deck seems to have sped up a bit and deckbuilders find the tempo loss unacceptable, but they are absolute powerhouses in this deck where I want to have as many extra lands in hand to take advantage of K&T’s triggered ability. They’re also additional ways I can bring back those modal DFCs that I may have played as land drops early on and now want to play the spell side.

I have a lot of lands that enter the battlefield tapped, and while K&T’s extra land drops can mitigate a little bit of the tempo loss, I don’t want to overload on them. And yet having a couple of Temples has been awesome in this deck for the ability to scry, pick up the land later and then scry again. Well worth the drawback to have a couple in the list.

Path of Ancestry is like another copy of Command Tower that enters the battlefield tapped, but the occasional scry ability any time I play a Human or Soldier will come in handy over the course of the game.  Exotic Orchard is nice and untapped and should be able to provide the choice of a couple of useful colors in a typical Commander pod.

Here is how the deck graphs out thanks to our friends at Archidekt:

So, what do you think of my Kynaios and Tiro of Meletis deck? Is there anything you think I should try out?