1. Baums Have Been Dropped

Star City Games’s return to major IRL events took place this past weekend at SCG CON, and it’s rather fitting to see Corey Baumeister take home the title. A fairly new Roanoke resident, over the past few years Baumeister decided that he was interested in taking Magic more seriously, which is pretty wild to think about because he was already having plenty of success before making that decision. He’s always been a highly skilled player, just like big bro Brad Nelson, but with Magic being his sole focus, I’ve always wondered what Corey could accomplish if he went for it.

Flash forward to this past weekend and we now see Corey streaming regularly in front of a large audience on Twitch, refusing to share the marbles with Ross Merriam on VS Live!, covering Set Championships and Magic World Championship XXVII, and adding another trophy to his mantel after absolutely decimating the SCG Invitational this past weekend.

I’d call him one of Magic’s fastest-rising stars but he’s already there. I can’t wait to see what comes next.

In the other major event of the weekend, Magic veteran Nico Bohny was victorious in the 2021 Magic Online Champions Showcase Season 2. In an event filled with some of Magic Online’s absolute finest — Logan Nettles, Jack Potter, Sam Rolph, Nathan Steuer — Bohny’s win was rather Yuta Takahashi-esque to say the least.

Vintage Cube was the first portion of the event, seeing Bohny draft an above-average Simic Ramp deck with Channel; Rofellos, Llanowar Emissary; and Upheaval as standouts. Unfortunately, the deck did not meet expectations — as green decks often don’t in my Vintage Cube experience — and Bohny saw himself eliminated from making the finals of the event through this avenue more quickly than expected.

However, much like Takahashi at Magic World Championship XXVII, there was an entirely different format to play and a second chance granted. Whoever went 3-0 through the Modern portion of the event would go on to face Marcela Almeida, the winner of the Vintage Cube portion.

That’s when the Hammering began.

Colossus Hammer-based decks have been a top-tier archetype in Modern since the arrival of Modern Horizons 2. And though the deck has gone through quite a few changes over the past few months (monocolor or splashing a color; playing with or without Giver of Runes, Ingenious Smith, and Mishra’s Bauble; discard in the maindeck, sideboard, or at all) it continues to perform admirably given its speed, resiliency, and access to the best card in the format (Lurrus of the Dream-Den… duh…).

If you’ve never seen or played this deck before. Bohny’s performance is the ultimate selling point. Simply put, he crushed his opponents in quick and brutal fashion, including Potter on Amulet Titan and Almeida on Temur Crashcade twice (once in the Swiss and again in the finals). As someone who covered all of the Modern rounds of the event, it made my day much shorter than intended, something I certainly appreciate at my quickly advancing age.

The takeaway is this: even though a tournament may not start out great, it can still end great. We saw it with Takahashi a few weeks ago and we’re seeing it here now once again. Bohny has a ton of accomplishments on his resume — including a Magic Online account that’s nineteen years old! — but this one stands out given the small but skilled field and the whole “no room for error” thing since you have to 3-0 one of the two portions to make the finals.

Oh, also, Orzhov Hammer (Lurrus) is busted and you should be playing it. Don’t forget that either.

Look, I like new things. I’m not anti-change. But… like… isn’t this just a[n] [overly] complicated way of doing kicker?

One could argue that most of Magic’s mechanics are kicker [in disguise], but this is the least disguised kicker has ever been. I guess there’s the [incredible] enjoyment I’ll get out of brackets just being everywhere on cards moving forward (I think it’s hilarious), but this feels like one of those mechanics that Patrick and I would cover on The Resleevables two years from now and our key note from Nick Miller would be, “Mark Rosewater said they’re never doing this again.”

As with all things, we’ll see how it goes!

Any TLC stans out there? No? Just me…? [Copy Editor’s Note: They specified “No Scrubs,” so I’m out.] 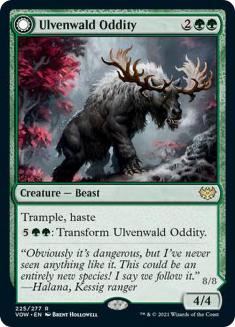 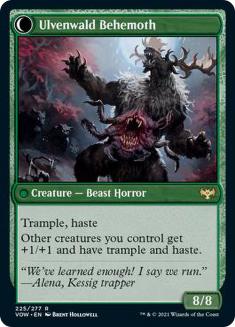 And the first thing I said to myself [out loud] was, “Nice bulk rare.”

Which really sucks because I think this card is super-cool. It’s objectively powerful, has incredible art, and has the cool side quest of transforming it and going animal. But the days of a 4/4 haste for four mana being [actually] good are so far behind us that it’s hard for me to remember when it was [actually] a [smart] thing to be doing.

I guess when you’ve been doing this whole Magic thing for over twenty years [like I have], you remember the days of Giant Solifuge, Ravenous Baloth, Jade Leech, and a bevy of other four-mana green creatures that got you excited. Nowadays, you look at them and think, “Does it have an enters-the-battlefield trigger?” or “Does it have a leaves-the-battlefield trigger?” or “Why in the hell would I play this when Esika’s Chariot exists?”

Being old is depressing sometimes.

As someone who enjoys a healthy dose of both sarcasm and hyperbole, I decided to put the following on the ole Twittersphere last week just to see what would happen.

It should come as no surprise, given my love of below-average white-based aggro decks, that I’m a fan of Thalia, Guardian of Thraben and always have been. The responses to said Tweet, you can read at your earliest convenience, but my biggest takeaway from them is that when we’re in a preview season and evaluating new cards, there’s some weird assumption that everything is just going to plan 100% of the time.

“Oh, you cast a creature? Well I clearly have the answer to it, and all problematic creatures moving forward. And did I mention I’m hitting all of my land drops, am never color screwed, and always keep seven cards?”

Yeah, that’s not how the game of Magic works. Because if it was [how the game works], it wouldn’t be a very fun game because all the games would be the same.

The reason Thalia is so good across multiple formats is because in the matchups it’s meant for, it’s something [oftentimes] that can’t be ignored. It doesn’t mean it can’t be answered. It’s a 2/1. Of course it can be answered. But it’s annoying for a spell-based deck to play against because they don’t get to operate at full capacity. And in the games where said spell-based deck keeps a shaky hand, fumbles on mana, or needs to kill multiple different things — ya know, what happens in most games and matches of Magic — Thalia compounds that and makes things even more difficult.

Yes, we all know that Izzet-based Alrund Epiphany decks have lots of ways to kill creatures. That’s news to approximately no one. But Thalia is now another one you need to kill from a white-based aggro deck that also has the side effect of making life difficult in the short-term (and maybe even longer than that) if it’s not killed.

Games don’t always go perfectly. Stop pretending that they do.

Hey late-night construction human? How about you cut that [shit] out before I arrow you!

8. Yes I’m Going to Make You Watch It Again

Who does push-ups while playing a game as complicated as Magic on their phone? Like, what?

Are they being paid by the gesture?