I can’t remember the last Draft format where the value of commons changed so much depending on the context of the cards you have (or, if it’s early in the draft, the cards you expect to have access to). This is because there are no Organ Hoarders in this format. None of the commons jump out as strong value cards or really compete with good uncommons or rares. The best commons in the format are just removal spells, which are important, but there are only so many of them. This means that there are many decisions in which you have to decide between a bunch of solid, but not great, commons. During these decisions, what matters the most is your pool rather than the actual power level of the cards in the pack.

For example, Traveling Minister is generally a better card than Heron of Hope, but there are many different textures of a pool that would prefer Heron of Hope. If you already have multiple Ministers, pairing them with Heron is so strong that it’s better to take Heron of Hope in that case. If your deck lacks flying threats and doesn’t have many four-drops yet, it’s often better to take Heron too. Basically, across all colors and most commons, even the best commons, there are multiple scenarios that perturb the order of commons just enough that, if you follow a pick order to navigate this format, you will be making bigger mistakes than you would in most formats.

This draft started off with a terrible Pack 1, Pick 1 and not much great to follow it. I should note that Parasitic Grasp was taken over Abrade, so don’t read this information like red isn’t open (although we do know that a red common is missing from the following pack). Regardless, context is king in this format, so make sure to keep that in mind when approaching this draft!

Vilespawn Spider is a pretty powerful uncommon. Simic is not an archetype I’m fond of, and while the Spider is certainly a good card, it doesn’t pull me into Simic. I would be looking to take the card around this time anyway if I started with green and blue cards. Given that I have no cards that I could play alongside the Spider, I think it would be a mistake to take the card.

Lantern Bearer is the best blue common, in case you haven’t gotten the memo on that card yet. It continues to impress me. It’s significantly better than Scattered Thoughts in every single blue archetype, even Izzet, which honestly blew my mind. But that’s the world we live in. If Lantern Bearer isn’t a serious consideration in this pack for you, I strongly think you should be picking the card higher. I’m not saying that it’s the pick here; I didn’t take it. But I think a lot of people at the beginning of this format wouldn’t have even looked at Bearer in the same pack as Scattered Thoughts, Wolf Strike, and Fierce Retribution.

My particular pool is best-suited to draft Rakdos. But I can’t take a black or red card here. I could take Ceremonial Knife, which certainly keeps me the most open, but is notably worse than the other options. Wolf Strike is a good card, but the context of this pool makes green a color I just don’t want to pursue. While I’m not guaranteed to be black, it’s quite likely that’s the direction I go.

This pick boils down to the following three options:

When I did this draft last week, I landed on Ceremonial Knife. At the time I was much higher on the card and I was also lower on Lantern Bearer and Fierce Retribution. I think this was a mistake and the correct pick is Fierce Retribution. In this format, it really comes down to removal. It’s just so important. Now, once I have three removal spells in my deck, I’m inclined to make decisions towards synergy and to fill holes in my deck over the non-premium removal spells. But at the beginning of the draft, I just want to make sure I have multiple removal spells so I have the opportunity to make decisions in Pack 2 and Pack 3 to optimize my overall deck instead.

This next pick is interesting. I’m most likely Orzhov, but I could also be Dimir. While I did just take Edgar, Charmed Groom Pack 2, Pick 1, it’s important to note that the end of Pack 1 communicated that blue was incredibly open. When you get multiple cards that are in the Top 3 commons for their color at the end of Pack 1, it’s a pretty clear signal. Edgar is also splashable. That being said, the white cards in my pool are certainly better than the blue cards in my pool. What would you take?

Overcharged Amalgam is not a bomb rare, but it’s a good one. What’s funny about this pick is that context from the previous pack in this article is what makes it interesting. If Ceremonial Knife were Fierce Retribution, this is a clear Hero’s Downfall. If Ceremonial Knife were Lantern Bearer, I would end up taking Overcharged Amalgam to pair black with the open color, especially because the person passing to me didn’t take Overcharged Amalgam, so I can expect blue to flow both this pack and the next pack. However, without an extra blue or white card, this pick is very close.

In fact, there are many small modifications I could make to my pool that would tip the scale. A single copy of Evolving Wilds would make me take Amalgam and look to splash Edgar. As is, I wouldn’t fault anybody for listening to the screaming signal that blue is open. But I don’t think that matters enough with respect to what you miss.

Hero’s Downfall is one of the premium uncommons in the set. Removal is critical thanks to all the bombs. While I will be sad if I pass Overcharged Amalgam and get pushed into Dimir, that deck will still be happy to have Hero’s Downfall. It’s not as good as the Amalgam, but the delta between the two isn’t so large. Now, passing the Amalgam does reduce the probability that blue flows in Pack 3, but only if somebody else is in a position to pivot to blue, which I don’t expect to be all that likely.

This pick is close, but I think taking Hero’s Downfall is the better option. I ended up solidly committing to Orzhov, and have a pretty good deck going into Pack 3. Now, I’ve said removal is crucial, but I actually think the next pick is a lot closer than many would think.

Pointed Discussion is one of the most underrated black commons. We often see some form of black Divination at common, but this isn’t Divination. It’s Sift! 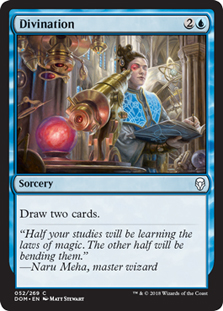 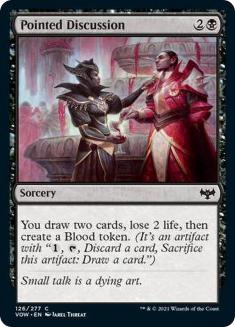 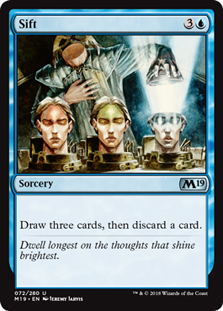 Sift is a much more powerful card than Divination. Two damage is well worth the price to be able to split up the mana and rummage on a more beneficial turn. Now, for a lot of black decks, this card isn’t incredibly premium, but for Orzhov it is. According to 17Lands, it’s the second-highest-performing common overall in Orzhov. Yes, that’s above Bleed Dry. In most scenarios, I would take Bleed Dry over Pointed Discussion even in Orzhov because it’s just so important to have removal. But I already have three premium removal spells, and I could technically still see more in this pack too.

Still, suppose I closed my eyes and you told me, “It’s Pack 3, Pick 2 and you have an Orzhov deck with three removal spells. What would you rather take, Pointed Discussion or Fierce Retribution?” I would tell you Fierce Retribution (and also Bleed Dry in case that’s not clear).

However, here I’m taking Pointed Discussion, and it all comes down to the context of my pool. My curve is incredibly low, and I already have at least four one-drops I plan on playing. I’m aggressive, but I don’t actually hit hard enough to end games early. I have removal spells and my creatures. The only thing my deck is missing to tie it all together is card advantage. With so many copies of Traveling Minister, it’s pretty easy to run out of gas. I would play at least two, but probably three copies of Pointed Discussion in this deck, and I think it’s a better pick given the context of my pool than Fierce Retribution.