Back when I started my two-month tenure as a Game Designer at Wizards of the Coast, I mentioned that if you think right now is an exciting time to be a Commander player, you should probably hang onto your hat.  These two months have borne that out, as we’ve previewed some pretty exciting stuff that will happen in 2020, most notably to include Commander Legends, a draftable product which will introduce 71 new potential commanders into the environment.

For some folks, we’re in overload.  For others, we’re Scrooge McDuck just diving into our piles of gold.  However you see it, Commander is really ramping it up.  It’s going to be a white-knuckle ride, but we’re hanging on for a thrilling adventure.

Now that my contract is over, things won’t much change, save for the fact that I’m not designing Magic cards every day.  I’m back at home, returning my focus to managing the format and all that entails.  It’s not like things were in stasis.  In the intervening time, we added another powerful voice to the Commander Advisory Group (CAG), Olivia Gobert-Hicks.  While I made passing mention to the appointment, I didn’t delve into any detail about how that came about.  I’ll rectify that.

I first saw Olivia as a guest host on the Commanderin’ podcast.  Her appeal is immediate, and after about three episodes, I suggested to Phil and Shivam that she’d make a great long-term addition.  Then Olivia and I ran into each other at SCG CON Summer 2019.  We talked about the future of the format and how it needed to be shaped.  It didn’t take me more than a few minutes to realize what kind of impact she could have in crafting that future. 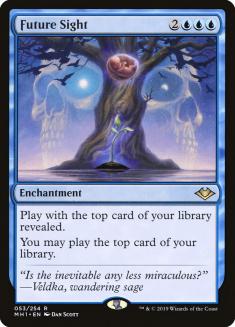 While she made her bones in Magic, so to speak, as a cosplayer, it would be foolish to limit her to that bin. (As a side note—I’d caution against considering any of the top cosplayers as “only” that; people who excel at one thing generally have other arrows in their quiver as well.  Some people are weirdly dismissive of cosplayers as merely decorative and this is simply a wrong-headed stance.)

If this were baseball, we’d call Olivia a five-tool player, since she can do it all.  What got her onto the CAG is that she’s fierce and smart, a take-no-prisoners attitude wrapped in a friendly, inclusive demeanor.  She’s just the kind of person that Commander’s future needs.

There’s plenty more new on tap for Commander in the coming year, to include an updated website, which should be launched by the first of the year.  The Commander Rules Committee (RC) will use the site in a number of new ways to keep folks posted on the hows and whys of what the format is doing.  We’re going to use it to do some exploration into expanding our reach to even more players, as well as fostering tomorrow’s content creators and powerful format voices that maybe no one has even heard yet.  My mantra during the last year or so has been “dream big,” and that’s where my Commander 2020 commitment stands. 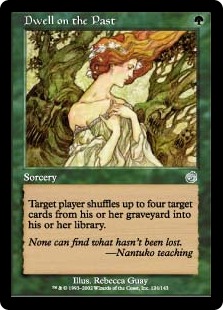 Thinking about the future also got me thinking about the past, which is what led to talking about this history of the format a few weeks back.  Sure, neat stuff is on the horizon, but for now, especially in this month or so of downtime as we head into the holidays, I want to take a look at yesteryear.  I’m not looking at any kind of complete retrospective or anything, but I want to make sure that we don’t forget where we came from as a format.  To that end, I wanted to find a classic commander and build a new deck out of it. I decided that the dividing line would be the Modern card frame.  The commander would have to be something which debuted with the old one.

Before I head there, I’ll offer the sidelight that I’m going to put the Do Over Project on the shelf for now.  When I started the project, a version of Abe Sargent’s “The Next 99,” our number of choices to lead decks was low.  It was an engaging exercise in deckbuilding, in letting restriction breed creativity.  The number of new and exciting commanders we’ve seen over the last few years, which is only going to increase in the future, means that it’s been difficult to keep up with the Do Over and dig into the new as well.  Especially now that I’ve been involved in making new cards and commanders, it’ll be hard to avoid the new space that they’re opening up.  If my amount of available time were infinite, I’d do both.  Since it’s not, I have to choose a path.  Philosophically, I don’t want to forget the past, but I also don’t want to get lost in the past.  Upward and onward into tomorrow—after one more look at yesterday.

Almost immediately, I realized that it had to be an OG Elder Dragon.  Sure, there are other legendary creatures from the pre-Modern era that might be cool, but if we’re going to honor the past, let’s go back to the literal beginning. 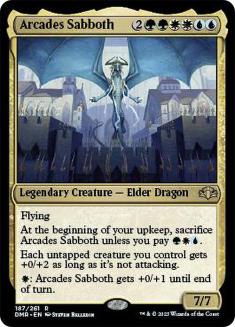 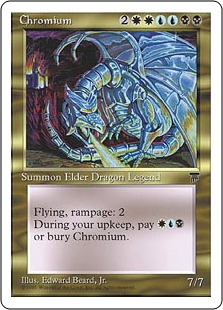 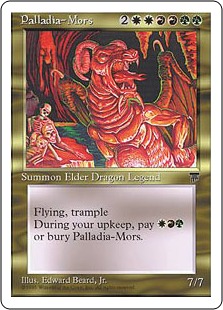 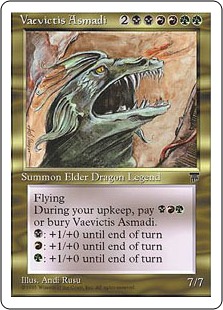 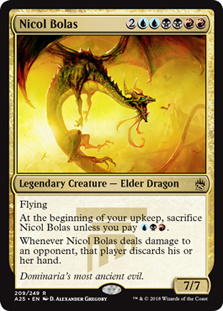 The only one I discarded out of hand was Nicol Bolas.  There’s an argument to make that Bolas bridges past and present because he’s so present in recent lore, but it’s also an argument against since there’s been more focus on him.  A quick search of EDHRec bore that out.  It lists 25 decks for Arcades Sabboth, seventeen for Chromium, six for Palladia-Mors, 22 for Vaevictis Asmadi—and 270 for Nicol Bolas.

I immediately chucked our favorite villain off the raft.  Poor Palladia-Mors was the early favorite, given that there are nearly no builds for it.  Arcades Sabboth had some sentimental value to me because it was the first one I built; it eventually became my first draft of Phelddagrif.  I thought about trying to make some kind of Lure deck with Chromium to take advantage of rampage, but there was no real support without jumping through way too many hoops, so it went away.  I’m a Jundaholic, so Vaevictis Asmadi was immediately attractive.  I focused on the abilities of each the remaining Elder Dragon:

There certainly weren’t any tie-breakers there, although I was still leading Jundward, since it fits my relatively aggressive nature.  What got me out of the quagmire was looking at which M19 version of these legends I’d prefer to play with.  That cemented Jund.  Vaevictis Asmadi, the Dire’s ability is simply more interesting than the build-around of Arcades, the Strategist or Palladia-Mors, the Ruiner.

Clearly the next question is how to make it interesting and not just another Jund good stuff deck.  I already have a Kaarthus, Tyrant of Jund Dragons deck, so that’s out thematically.  After poring over a number of options, I decided on a path.  Taking the two Vaevictis versions as a template, the idea is to use Jund’s inherent destruction capability to clear the way for original Vaevictis to swing through for commander damage kills—not quite Voltron, but with some elements of it.  We’re particularly interested in killing other players’ flying creatures, or at least neutering them as blockers.  Putting in as many old-border cards as is reasonable is also a design restriction.  Here’s the list:

I’d rate the power of the deck about a 6, and it’s quite intentionally a Tammy/Timmy piece, throwing back to the format’s earliest days.  It’s a little top-heavy, certainly not going to kill anyone early, and will take some time to get rolling.  It’s probably best for your durdlier environment, your classic Commander battlecruiser style game.  It can have some big, fat turns, but you’ll spend some time getting there.

The whole idea is to be able to get out the commander and potentially kill in two hits, with either pumps from Sword of Light and Shadow or Sword of Fire and Ice combined with its own Firebreathing, or maybe that Braid of Fire that you’ve had going a while. 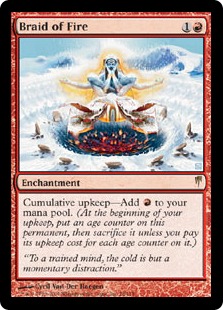 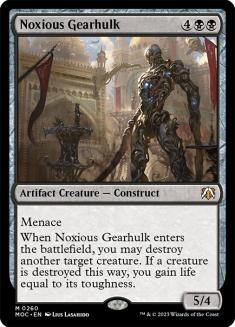 After some ramp, the deck wants to just get the flying chaff out of the way so that Vaevictis Asmadi can dominate the skies.  The creature killers, like Big Game Hunter, Bone Shredder, Patron of the Vein, and Noxious Gearhulk, want to take out big flyers.  Avatar of Woe is another intentional nod to the format’s ancient days, when it was a complete house.  It’s fallen out of favor lately, but that seems undeserved.  Thundermaw Hellkite is a way to tap them for a turn in order to get in.

There’s some possibility that you could make Vaevictis large enough before combat to get in a one-shot via Xenagos, God of Revels.  Matsu-Tribe Sniper will move something out of the way or combine with Basilisk Collar to eliminate it altogether.  Arashi, the Sky Asunder can also be combined with Basilisk Collar to similar effect.  War Cadence makes a fair amount of blocking kind of awkward, especially if you need something to sink Braid of Fire into. 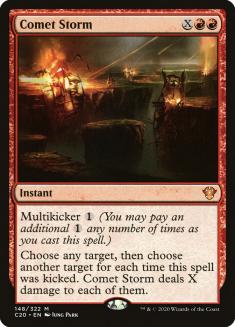 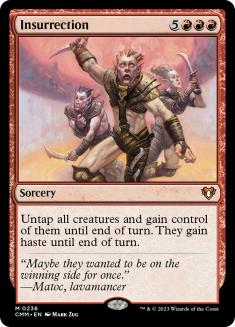 There are two alternate win conditions.  One is a big Comet Storm, possibly via Braid of Fire, although not necessarily so.  The second is Insurrection, which will both clear the path and give you extra bits of damage, which should certainly be enough to finish off any stragglers.

Commander has a bright future.  Even if that future looks quite different from the past, we can look at the olden days to get a sense of how things were and why we fell in love with the format in the first place.  It was all about being huge and unstoppable.  Things may have changed to a somewhat tighter format, but the fun of that style surely hasn’t gone away.