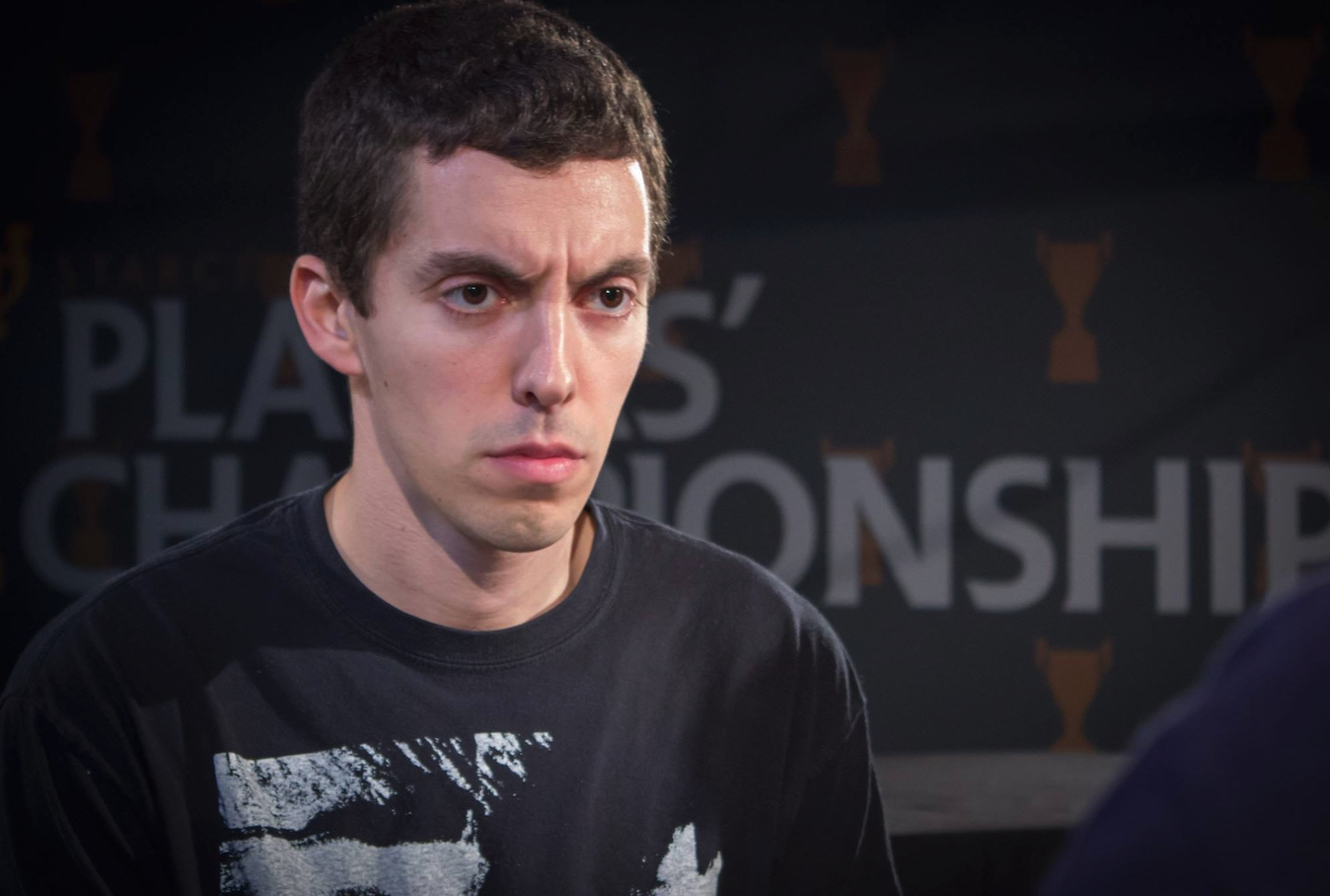 This is usually what I look like when I am playing an important match. I’m not really the chatty type during a game, and I attempt to make my focus absolute. In an important match nothing else matters but what is exactly in front of me. There may be money on the line, thousands of people watching, or more rounds in the tournament, but the only thing I can control and the only thing that matters in that moment is what I do with my cards and what my opponent does with theirs. Anything else is just noise. A distraction. Unnecessary.

However, there was a moment during my semi-final match against Brad Nelson where my focus cracked. Where I allowed outside thoughts to seep into my concentration, potentially distracting me from the task at hand. Thoughts that really had no logical bearing on the outcome of the match, thoughts that caused an emotional reaction that could be damaging to my focus, thoughts I try very hard to avoid.

While shuffling between games in my semi-final match with Brad, my thoughts shifted away from how many Wild Slashes and Kolaghan’s Commands Brad would have in his deck for the next game and how I was going to need to maximize my creature spells to play around Duress and Negate. Before I knew it, my mind was shuffling thoughts as fast as the cards were shuffling between my fingers.

It shifted to right beyond the curtains and lights, where the other competitors were gathered quietly watching a muted feed of the stream. Where Nicole, who has been endlessly supportive and drove eight hours to be here to watch me play, also nervously sat.

It shifted back home, to all my friends who were rooting me on from afar. Some were brothers in arms who I would still see at events, some who have mostly hung up the sleeves, some who got me started but never made it past the lunchroom tables at school, and some who don’t even know the difference between an Ancestral Recall and a Healing Salve.

It shifted across the country and across the world, to the many people I’ve met over the years. Maybe we shared dinner, a travel adventure, a sports game, or just quick moment chatting, and never really spoke again. Maybe we talked about a deck we both liked, or just shared a cab to the airport. I’ve met so many people.

It shifted beyond even such a grand scale, to people who I may not directly know but have read my articles or watched me stream. Maybe I helped them with a deck for their FNM or to take that next step into competitive Magic. Maybe they love Goblins. Maybe they just posted silly videos on my stream and made us all laugh.

I thought about this as I shuffled, and inside I felt a swell of emotion. While I came to this event to win, it wasn’t just for me— it was for everyone. Everyone who has been a part of this wild ride over the years. Everyone who has supported me in one way or another. Everyone who respected what I did and wanted to see me succeed. It only lasted a moment, but I noticed something odd for such a tense situation that required so much focus.

Not a joking smile or the grin that accompanies witty banter. Not a response to winning a game or drawing a good card. Not feigned politeness.

Instead a true, genuine smile— probably too small and quick for anyone to have even really noticed, but it was one of the most important smiles the muscles in my face have ever put together. I was here for a reason, and no matter what the final result was, I was going to give everything I had.

Catching my mind from drifting and coming back to focus on the task at hand, I noticed surprisingly that it was not a distraction at all. Usually I avoid thinking about people and factors that don’t involve the game, but this time it was different. I felt warm inside, and far from deterring or distracting me, it gave me strength.

The rest of the tournament was mostly a blur.

Brad and Todd are both great guys and outstanding competitors, and I was very fortunate to be able to take them both down. I know how much they both wanted this event, and I was extremely impressed with their composure during the matches and their grace in defeat. Brad’s toast at the after party was “to the player who wanted it more than anyone else,” and that meant a lot, as I really felt like I did.

I sat on the exercise bike of the hotel gym each morning before the event going over my battle plan for the day. I may like, respect, and be friends with everyone else in the tournament – we had already all gone out to dinner, karaoke, and to see Star Wars – but when the lights went down, it was going to be time to battle. Kill or be killed. Like a hockey game, what happens on the rink stays on the rink, and your only job is to leave it all on the rink. Last year I got caught up in the spectacle of the event, and this year I was not going to make the same mistake again.

Fittingly, Nicole sent me this text on Sunday morning:

I came into this event expecting a battle, and as I drew Ugin, the Spirit Dragon off of that Chromatic Star and watched it slowly tick up to eleven loyalty I began to realize the fight was nearly over. When Todd extended the hand I could do nothing but let out a deep breath and lean back into my chair. The need for battle-readiness was over. The fight was won.

There were times in this event where I got very lucky. After a two land hand didn’t pan out in game 1 of the quarterfinals against Jonathan Morowski, a double mulligan to a one-land hand on the play in game 2 put me in a position to be eliminated from the event in a match where I would never actually cast a spell. My game 1 draw of Ugin, the Spirit Dragon in the semifinals against Brad was also a miracle, as were a few other key draws throughout the course of the event.

But the truth is I am far luckier than even the biggest of topdecks.

While such a seemingly insignificant moment in the grand scheme of everything that has happened over the last week, that little smile while shuffling between games really does mean the world to me— more than the money, more than next year’s qualification, more than the absurdly large trophy. The outpouring of support I’ve received over the last few days has done nothing but cement every feeling that birthed that smile, and last weekend was truly one of the best of my life.

Thank you so much for being a part of it.