I suppose this is a long time coming…

While I haven’t had the most time to play Modern recently (check out Dominaria’s Judgment, d00mwake, or aspiringspike if that’s what you’re looking for), when it is time to do battle, there’s really only one choice for me — equipping Colossus Hammer on some horrible creatures on the cheap. As my Tweets above suggest, I believe Mono-White Hammer (Lurrus) is the best deck in Modern and has been for some time. I understand that Modern has numerous compelling options, which is why the format is incredible right now, but I’m still not tired of beating someone’s brains in with a 10/12 Ornithopter after all these months. Call me old-fashioned, I guess.

If you’re here for a sideboard guide, it’s at the bottom of this article just like all of our other “Everything I Know…” primers. But if you want to learn the way of the Hammer, you must first realize that…

Splashing Black in This Deck Sucks

I’m sure one could make an argument that it was correct at one point to splash Thoughtseize, Dark Confidant, and Knight of Malice, but only one of those cards is actually still good in 2021 and it’s the one that costs one mana (shocking, I know). Knight of Malice I get, since it’s a sideboard card against Azorius Control decks that were reliant on Prismatic Ending; Teferi, Time Raveler; and Solitude to buy time, but Dark Confidant I’ll never get because Hammer decks aren’t especially interested in playing the attrition-based games that Dark Confidant promotes. 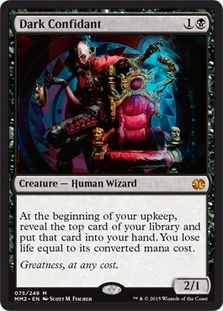 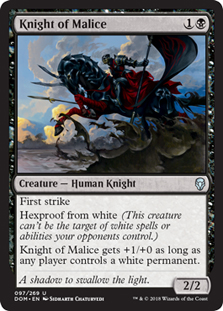 As for Thoughtseize, it’s not a card Hammer has ever needed to win matches, so I don’t really understand why people play it. I guess the argument is that it’s good against combo, but white is generally the best color in Modern against combo, and if you’re sideboarding in Thoughtseize against Modern’s control decks, you’re attacking them from the wrong angle because all their permission is redundant.

But the thing that splashing brings into the equation with Hammer is that your mana just gets so much worse. I know that splashing comes easily on paper via Concealed Courtyard, Silent Clearing, Godless Shrine, and some number of fetchlands, but it’s not free (Courtyard can enter the battlefield tapped, Godless Shrine and fetchlands cost life, etc.), and it makes this deck significantly worse against Blood Moon, a card that Blood Moon players are already incentivized to bring in against you to slow down Inkmoth Nexus and Urza’s Saga.

Do Not Cut the Best Card in Modern from Your Deck

Now that we agree that splashing isn’t necessary, let’s move on to this nonsense…

To be clear, I have no problem with CrusherBotBG. I’m sure they’re a wonderful person. What I do have a problem with is cutting the best card in Modern from your deck to play Nettlecyst. That’s unacceptable and I will not stand by and let it happen.

Over the course of my *checks notes* over-twenty-year Magic career, my biggest regret by far is just not playing the best cards or best deck more often. Since I dialed back my play in 2014, I had a very clear conversation with myself: “When you do play, just play the thing(s) that are likely going to get banned instead of the thing(s) that are unlikely to get banned.”

None of the answers to those questions were “Nettlecyst and other three-mana Equipment.”

You only get so many chances at doing that. Two people who recently did? Corey Baumeister, the winner of the SCG Invitational with Grixis Death’s Shadow (Lurrus), and Edwin Colleran, the winner of CFB Las Vegas with Rakdos Midrange (Lurrus).

Play Lurrus while you still can. You’ll regret it if you don’t.

Here’s Another Card You Should Play 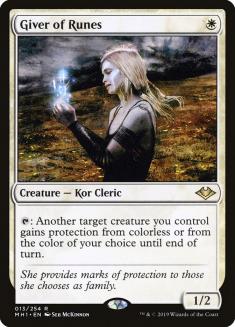 I see all these builds of Hammer with horrible cards like Dark Confidant, Spellskite, Ingenious Smith, and Mishra’s Bauble. They’re all terrible and don’t contribute to Hammer’s gameplan at all. Let’s go over them quickly and why they suck:

So why play Giver of Runes?

Giver of Runes won me two games no other card could have in Las Vegas. That may not seem like much, but two games is a lot in the context of a fourteen-round Magic tournament. I wouldn’t trade it for anything right now and I don’t think you should either.

I got chu fam.

A couple of quick notes:

What you’re all here for, I guess. Away we go!

This matchup looks a little weird because I’m getting funky with Ornithopter and Memnite. When I’m on the play, I just want to play a normal game and make them react to me to the best of my ability. I prefer Ornithopter to Memnite on the play because flying matters in the matchup as far as Hammering someone is concerned.

When I’m on the draw, I’m putting a huge priority on trading with Ragavan. Some people sideboard out Ragavan in this matchup. Some people don’t. I play as though they’re leaving it in because the mana advantage it generates when the opponent is on the play is difficult to overcome. I still leave one Ornithopter in, however, to find with Urza’s Saga in the off-chance I need to chump-block Murktide Regent.

Pithing Needle mostly has nothing to name in this matchup (if they’re Four-Color Crashcade, you can nail Teferi, Time Raveler) so it comes out fairly quickly. Memnite is out over Ornithopter because you want to minimize Fury blowouts as best you can.

VS Four-Color Control (Kaheera or Yorion)

You’re just kinda playing them straight up. They’ll have access to stuff like Fury; Solitude; Wrenn and Six; Teferi, Time Raveler; and various spot removal spells, but those are all things you need to know how to play around to succeed with this deck in the first place. Nothing should really be taking you by surprise.

I can see leaving in Pithing Needle if you see Karn, the Great Creator, but the jury is still a bit split on that card in Amulet Titan right now. One thing we know for sure is Seal of Cleansing is great here, taking care of Amulet of Vigor, Dryad of the Ilysian Grove, and Urza’s Saga.

At the end of the day, you need to be faster than the opponent, so mulligan accordingly. They’re skimping on Force of Vigor, so if you have the combo, just go for it.

Again, you’re racing here so mulligan accordingly. Pithing Needle names Goblin Charbelcher but it isn’t flat game over since most have incorporated a Pyromancer Ascension alternate kill. Seal of Cleansing is nice to protect yourself a bit against that kill as well as nabbing Strike It Rich Treasures. Fury and Force of Vigor come in after sideboard for them in varying numbers, and they’re easy for them to cast, given the lands are actual red and green cards.

Pithing Needle naming Yawgmoth, Thran Physician is huge here since that card can just value you into the ground (I used to sideboard a second copy of Needle exclusively for that card in this matchup). Prismatic Ending may not seem like much, but controlling their mana creatures on the draw is a nice bonus, as is exiling Young Wolf or Strangleroot Geist. Esper Sentinel essentially has no text in this matchup, so that one goes to the sideboard pretty easily.

There are times where Esper Sentinel is good, but those times are few and far between. Don’t overthink it and just sideboard them out. Prismatic Ending and Seal of Cleansing are incredible in this matchup, so hope to draw them a bunch, with Cleansing being the better of the two. Giver of Runes also shines at allowing you to block threats that have a Hammer on them and protecting them (this keeps coming up for me, heh) or pushing through damage if things line up a certain way. Ultimately, your goal is to get Lurrus on the battlefield and loop Seal of Cleansing.

As I’m sure you’re aware, there are a bevy of Modern decks I haven’t covered here, but I feel as though these are the most relevant at this time. Regardless of this sideboarding guide, your best bet in winning with Hammer is playing a bunch of games with it and messing up a lot. That’s what I did on Twitch a few months ago and now everything is second nature to me.

My last piece of advice: if your hand doesn’t have Urza’s Saga, Sigarda’s Aid, or Puresteel Paladin, take a mulligan. Saga is strong enough to keep you in a game and Aid/Puresteel are the more important half of setting up a Hammer on something. Do not convince yourself to keep bad hands that will materialize into something if you draw the perfect card. You’ll draw a Memnite and hate everything.