Vecna, one of the most storied villains in Dungeons & Dragons, has made it to Magic in Adventures in the Forgotten Realms. Gavin Verhey used today’s episode to tell his story and show off the Vecna token from the new set.

Vecna dates back to 1976 at the start of D&D when his left eye and left hand showed up, shrouded in mystery. Originally a lich, Vecna shows up in source books as a God in every edition since Third Edition. He’s one of the most fearsome enemies any adventuring party can encounter. 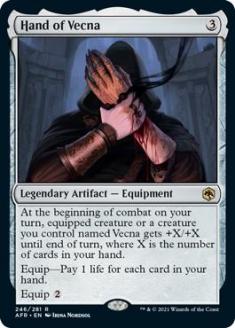 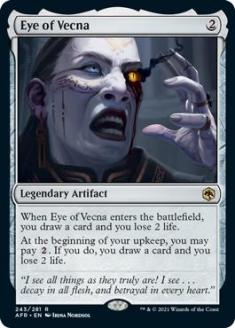 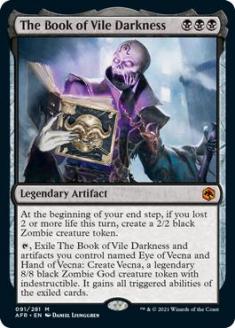 The lore of the Hand of Vecna and Eye of Vecna revolves around the user having to remove their own hand or eye to replace them with Vecna’s in order to use them and gain his power, which is why both artifacts have life loss attached to them in return for their abilities. To summon Vecna, you’ll need the Book of Vile Darkness, written by Vecna himself.

Now, check out the token for Vecna!

What do you think of Vecna and his cards? Are you going to try to summon the Zombie God?

Dungeons & Dragons: Adventures in the Forgotten Realms is scheduled for release on July 23. View our official preview gallery.