Verhey will occasionally hit the “random card” button on Gatherer and give off trivia and behind the scenes information of the cards selected. Today he started out with Conclave Cavalier. 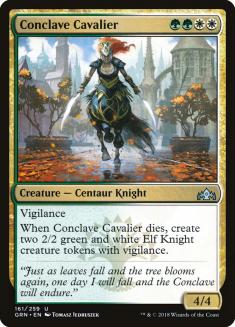 Conclave Cavalier is part of a ten-card cycle over Guilds of Ravnica and Ravnica Allegiance that were made to incentivize players to play two-color guild decks instead of three and four-color decks due to the mana making it easier to splash. They don’t always work out on curve if you have only basic lands so they didn’t quite live up to the mark in that regard. Another issue was that they were tough to balance as cards like Frilled Mystic and Crackling Drake saw much higher play than the others, though Basilica Bell-Haunt did see some play. 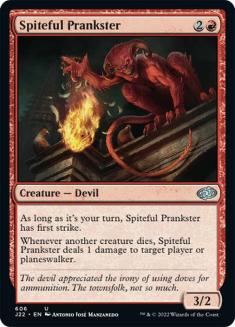 Jumpstart themed decks needed extra cards to flesh out all the decks and Spiteful Prankster slots in as a great role player for the Devils deck. It doesn’t do anything amazing or fall under a cycle, it was just one of the many cards made to help fill out the packs so they play well together. 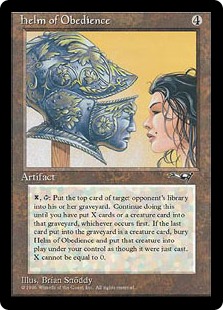 Lastly, Helm of Obedience is from Alliances and is a reserved list card, preventing it from being physically reprinted. It has, however, showed up in Masters Edition on Magic Online. The card is mainly known for its combo with Leyline of the Void that allows you to deck and beat your opponent in one activation.