Wizards of the Coast (WotC) has released their weekly MTG Arena update that includes details on Explorer bans, upcoming events, and more.

Winota, Joiner of Forcers and Tibalt’s Trickery Banned In Explorer

In a surprise Banned & Restricted announcement, WotC banned Winota, Joiner of Forces and Tibalt’s Trickery in Explorer just two weeks after the launch of the format on MTG Arena. 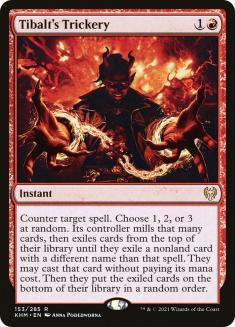 Donald Smith and Andy Clautice cited an “extreme amount of play and high win rates across Explorer game modes” for the Winota banning. Winota decks have been a staple in Pioneer and were quick to port over to Explorer. The announcement said the deck can present too large a battlefield presence for unprepared opponents.

Tibalt’s Trickery, on the other hand, is getting the axe due to creating “extremely negative experiences” to play against and growing play rates, though no mention of win rates appeared in the article. Combo decks utilizing the two-mana spell don’t offer opponent’s enough time to have meaningful interaction, so the card is being banned.

Players who have not already received wild card reimbursements for these cards in prior formats will get wild cards back after tomorrow’s client update. Notably, Winota will be unbanned when Explorer shifts to Pioneer, assuming the card is still legal in Pioneer at that time. More details on the B&R update can be found here.

Arena Open Set For This Weekend

The next Arena Open will feature Streets of New Capenna limited this weekend. Day 1 is Saturday and will be Sealed and offer Best-Of-One and Best-Of-Three play options. Players receive a Urabrask, Heretic Praetor card style for entering and can enter Day 1 as many times as they wish.

Five special events celebrating each family from Streets of New Capenna will start on May 12 and run through June 2, allowing players to earn golden age showcase card styles and other prizes. Each event will use Best-Of-One Alchemy Singleton with a twist via a new emblem for each event. Entry fee for each event is 2,500 gold or 500 gems. The first two events have been previewed so far.

Players will have an emblem that reads, “Once during each of your turns, you may cast an instant or sorcery spell from your graveyard by sacrificing a creature in addition to paying its other costs. If a spell cast this way would be put into your graveyard, exile it instead.”

Card styles available to earn include:

Players will have an emblem that reads, “Whenever you attack, target attacking creature connives.”

Card styles available to earn include: