The Unfinity preview season is done, and you may be asking yourself, “What does this mean for Commander?” What’s cool about this Un-set is that some of the cards are Eternal-legal and thus Commander-legal; cards that are not Eternal-legal and are equivalent to the old silver-bordered cards have an acorn stamp in the bottom middle part of the card.

As always, if your playgroup is cool with some or all silver-bordered and acorn-stamped cards, have at it!  But if you want to bring that deck to a table with people you may not have played before, you’ll need to have a Rule 0 conversation about it beforehand. 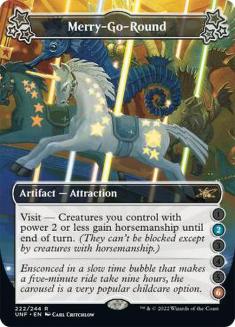 One Unfinity mechanic and associated card set I’m excited about are the Attractions, which are similar to the Contraptions from the previous Un-set. If you haven’t kept up with the Unfinity previews and are unaware of this cool new artifact subtype, let’s go over it here!

The Rules of Attractions

Here’s what Matt Tabak said in the Unfinity mechanics article:

Attractions represent all the rides, games, and shops you might visit while on the midway. Attractions aren’t played in your main decks, and they don’t have normal Magic backs. Rather, they’re played in their own deck called the Attraction deck.

Attractions are artifacts, but you’ll notice they don’t have a mana cost. They aren’t cast, and in fact, they never even go to your hand. To get them from your Attraction deck to the battlefield, you’ll need to open them, using cards like “Lifetime” Pass Holder.

When told to open an Attraction, put the top card of your Attraction deck onto the battlefield face up under your control. Each Attraction has lights numbered 1–6 in the lower right corner. In fact, different versions of the same Attraction may have different lights lit up. The number 1 will never be lit up, and the number 6 will always be lit up.

Some Attractions offer minigames and prizes!

The prize is a reward for winning the minigame offered by the visit ability. Although these Attractions close down after you claim their prizes, you do get to open another to replace it.

Two things stand out to me when thinking about adding Attractions to a Commander deck. First, Attractions can be destroyed by anything that destroys artifacts, and then they go to the junkyard.  As far as I’ve been able to find, once an Attraction is in the junkyard it’s gone forever, so ways to protect Attractions from being destroyed will be quite valuable.

Secondly, by themselves you only get one roll at the beginning of your first main phase, and it appears that most ways to open an attraction happen during your main phase.  Once an Attraction is open, you must wait until your next turn to roll. All sorts of bad things can happen to artifacts before the turn comes back around, and then when you do get to roll the Attraction die, it’s possible that you could “miss” hitting the light number designation. This tells me that you’ll want to have ways to manipulate die rolls in your deck, and you’ll want ways to open up multiple Attractions at once to try to ensure that at least one Attraction fires off each time you roll.

A wrinkle to this consideration is that it appears that many (or maybe all) of the Attractions have different versions where different sets of lights from two to five are lit up (remember a one is always a miss, and a six is always a hit). If we’ve got a lot of ways to manipulate die rolls, it might be wise to choose most of your Attractions to always hit on a three or four or whatever, so that all Attractions will fire up each time you roll. But another approach could be to diversify your Attractions so that you’ve got most of your numbers covered two and up, giving you at least one hit each time you roll. If your deck regularly fetches up multiple Attractions and keeps them on the battlefield for much of the game, that might be the route to go.

Okay, let’s dig into the cards!

It’s interesting that nearly all Attractions that have a “prize” effect are acorn stamped.  Most of these have silly and weird effects that align perfectly within an Unfinity Sealed or Draft environment but might not work as smoothly in Commander, but feel free to give them a whirl if your playgroup is down for it. One card that’s a little bit of a head-scratcher to me is Log Flume, which seems pretty easy to track during a game of Commander, but perhaps there’s a lot of combo potential with the card that pushes this into acorn territory. If you’re not building some crazy, game-ending combo with Log Flume, I imagine you could easily Rule 0 this to add to your Attraction deck.

Next up are the Attractions without the acorn stamp which are legal in Eternal formats like Commander. Most of these have small effects with incremental advantage, much like the various Dungeons you can access with the initiative and delve into the dungeon mechanics. It’s important to note that Costume Shop’s visit ability deals with stickers, so you’ll likely only want to run that alongside other sticker cards in your deck.

Probably my favorite of these is Merry-Go-Round, featuring the return of horsemanship in a flavor home run!  In a Constructed format like Commander, you’ll need to have at least ten of these 22 for your Attraction deck, and my guess is the more you have, the better—you’d hate to run out of Attractions during the game!

It’s quickly obvious that black is the color you’ll want to have access to with your Attraction deck. There are a lot of ways to open an Attraction attached to some nifty effect, along with the recursive power of “Lifetime” Pass Holder. Step Right Up lets you open two Attractions!  It’s nice to note that Line Cutter lets you roll to visit your Attractions when it enters the battlefield.

Blue’s Attraction support is more shallow, but it’s nice to see that you can roll to visit your Attractions during your turn with Command Performance. Monitor Monitor opens an Attraction and then helps you manipulate your die roll with a reroll.

Green’s choices aren’t as choice as black and blue, but each of them opens an Attraction, and if you like Squirrel themes, Squirrel Squatters is awfully cute.

We’re starting to scrape the bottom of the Attraction support barrel with white, though I like how Complaints Clerk at least gives you a consolation Clown Robot token when you roll a one.

And with red we’ve reached Attraction support rock bottom unless you Rule 0 Goblin Blastronauts with your playgroup. If the only thing you’re breaking with copies are Attractions, I don’t think anyone will protest.

A handful of legendary creatures support an Attraction theme, and I’d strongly consider making Myra the Magnificent or The Most Dangerous Gamer the commander to lead the deck, since having a reliable Attraction opener in the command zone is going to make things much easier. When it comes to The Most Dangerous Gamer, the only non-acorn Attraction with a prize is Pick-a-Beeble, so if you want to add some acorn-stamped Attractions to up the chances of activating that “destroy target permanent” ability, you’ll need to run it past your opponents in a Rule 0 conversation.  Spinnerette, Arachnobat seems like a perfectly awesome inclusion in the 99 of a deck with The Most Dangerous Gamer at the helm.

Draconian Gate-Bot can slide right into any Attraction-themed Commander deck, but I’d hesitate before slotting it in; the last thing you’d want is for someone to target it with Rite of Replication kicked, destroying up to five of your Attractions in one fell swoop. While that likely wouldn’t be the optimal play, it might be too hilarious for your opponent not to do it.

You may have noticed that a lot of Attraction support cards are creatures that open an Attraction when they enter the battlefield, so I’d want to make room for cards like Panharmonicon and Teleportation Circle to squeeze out more triggers.

Dice-rolling cards have exploded onto the Commander scene the past couple of years, along with cards that care about dice-rolling or help advantage you in rolling the dice, so I’d definitely want to leverage some of those into my decklist. I also like some of the new ones from Unfinity like Night Shift of the Living Dead and Vedalken Squirrel-Whacker.

If your playgroup is cool with silver-border or acorn-stamped cards, you can dip into more ways to adjust your dice rolling or gain other benefits from dice rolling. The old-school Krark’s Other Thumb is too classic to ignore!

Protecting your Attractions from falling to targeted or mass removal seems worth some slots in your deck. I don’t normally advocate Darksteel Forge in Commander, but if most of what you’re protecting by making indestructible are Attractions, I don’t think anyone will fault you for that.

If you’re playing a full-on artifact deck, Attractions can serve as additional ways to leverage artifact synergies.  How much fun would it be to copy one of your Attractions with Mechanized Production?  I also really like the idea of putting Inspiring Statuary in your Attraction deck; much like Equipment, tapping your Attractions doesn’t do anything, so why not use them to help cast your nonartifact spells?

Another thing we should do is keep an eye out for cards in The Brothers’ War coming soon—it’s bound to have a strong artifact theme!

Potential Commanders for an Attraction Deck

Another thought was Urza, Lord High Artificer, which is generally recognized as a high-powered commander. But focusing mostly on Attraction shenanigans that might be a way to power down the deck to better hang with lower power Commander pods.

What other legendary creatures would work well as an Attraction commander?  What are your favorite Attraction and Attraction support cards?

I’d also love it if you followed my Twitch channel TheCompleteCommander, where I do Commander, Brawl, and sometimes other Magic-related streams when I can.  If you can’t join me live, the videos are available on demand for a few weeks on Twitch, but I also upload them to my YouTube channel.  You can also find the lists for my paper decks over on Archidekt if you want to dig into how I put together my own decks and brews.