Early previews for The Brothers’ War revealed the return of the meld mechanic, connected to the two brothers themselves, with Mishra, Claimed by Gix melding into Mishra, Lost to Phyrexia and Urza, Lord Protector melding into Urza, Planeswalker (which I wrote about here last week). Thursday’s previews brought a third meld card, and it made my green-loving heart race – Titania is here in a big way!  Titania, Voice of Gaea melds with Argoth, Sanctum of Nature to form the incredibly impressive Titania, Gaea Incarnate! 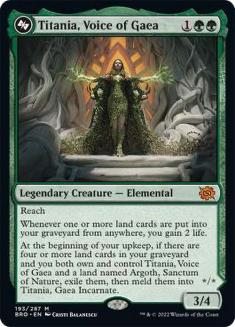 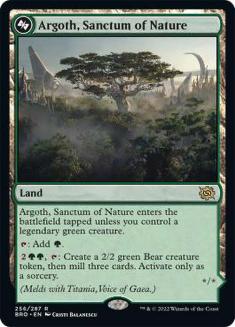 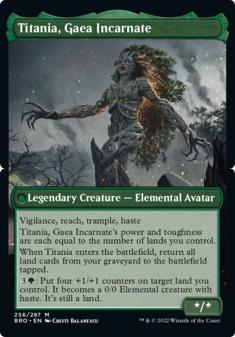 Like I mentioned in the article about Urza, Lord Protector, I really love that these meld cards create a mini-game within the game of Commander you’re playing; one piece of the meld lives in your command zone, but you’ve still got to find the other piece of the puzzle within the 99 to fully unleash the powerful abilities of the meld. While I don’t tend to play tutor cards in most of my Commander decks, I think it’s fully acceptable to do so to find the other part of the meld to level up your commander.

Titania, Voice of Gaea is a modest Magic card.  For three mana, you get a 3/4 creature with reach that gains you two life whenever one or more land cards are put into your graveyard from anywhere. The power comes from the meld ability, which should be relatively easy to trigger once you’ve found Argoth, Sanctum of Nature. There are tons of ways to get lands into your graveyard in green, whether it’s sacrificing, cycling, or milling (including dredge), and when the melded Titania, Gaea Incarnate enters the battlefield, any lands in your graveyard are put on your battlefield tapped.  This will easily pay the commander tax to recast Titania, Voice of Gaea.

It is fun that Argoth, Sanctum of Nature can be played in a Bear tribal deck such as one helmed by Ayula, Queen Among Bears, where the Bear token is more useful than milling, but the mill will help put more lands into the graveyard for Titania to set up the meld trigger. 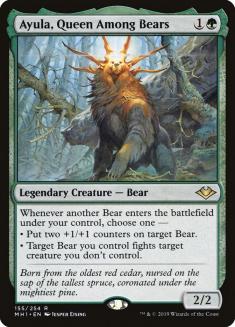 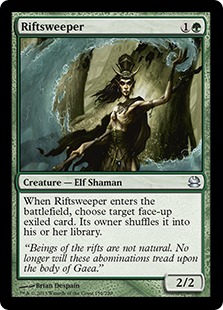 It’s important to have a plan to protect Titania, Gaea Incarnate from an exile effect like Swords to Plowshares. You can of course return Titania, Voice of Gaea to your command zone, but Argoth, Sanctum of Nature will remain in exile, where it will be difficult to get it back.  Riftsweeper can save your bacon, but other than that, you’ll want to have ways to sacrifice Titania, Gaea Incarnate in response to an exile effect.  Greater Good immediately springs to mind.

Tutor for a Land

To level up Titania, Voice of Gaea, we’ll need tools to complete our mini-game quest. Luckily for us, green has a ton of ways to find a nonbasic land such as Argoth, Sanctum of Nature. Elvish Reclaimer is the gold standard, since it’s a cheap creature that can go to work turn after turn finding specific lands from the deck while sacrificing lands to put them in the graveyard.  I also really like the cheap spells Crop Rotation, Expedition Map, and Sylvan Scrying to find Argoth efficiently.

There are lots of options for land searching higher up the mana curve. I’ve long been a big fan of Ulvenwald Hydra, which also appreciates a deck that’ll end up with a lot of lands on the battlefield. Reshape the Earth might seem a bit of overkill, but you can also just look at it as a way to pump Titania, Gaea Incarnate by a whopping ten!  And I imagine it will not be any problem getting to nine mana to cast Reshape the Earth.

Get Argoth from the Graveyard

There are times we’ll want to get Argoth from the graveyard, either when Titania, Gaea Incarnate dies, or if Argoth gets milled into the graveyard, or even if an opponent destroys Argoth with something like a Field of Ruin. The previous legendary incarnation of Titania, Protector of Argoth, makes a great way to get Argoth back.  Protector of Argoth is also an impressive threat if you have ways to sacrifice lands going so that you can churn out 5/3 Elemental creature tokens.  Petrified Field is a perfect way to retrieve Argoth, since the ability of Gaea Incarnate entering the battlefield will bring Petrified Field back to the battlefield to use again.

Ancient Greenwarden, Crucible of Worlds, and Ramunap Excavator are the usual suspects for playing land cards from your graveyard. I also really like Erinis, Gloom Stalker from Commander Legends: Battle for Baldur’s Gate; that attack trigger will bring a land back to the battlefield untapped, and since Erinis is a green legend, Argoth won’t make itself tapped.

Splendid Reclamation and The Mending of Dominaria are nice ways to bring all lands from the graveyard back to the battlefield, but note that that will mean you’ll need to work to refill the graveyard to get the meld trigger.

To help us over that four-land threshold for Voice of Gaea’s meld trigger, we can sacrifice lands.  A lot of sweet utility lands sacrifice for their effect and make excellent choices here, since they will eventually come back with Gaea Incarnate to use all over again.  I’ve long been a big fan of Mirrorpool, which is also a nifty way to sacrifice Gaea Incarnate in response to an exile effect; keep the token copy you make with Mirrorpool and sacrifice your commander so that Argoth ends up back in the graveyard, ready for retrieval.

The Streets of New Capenna fetchlands Cabaretti Courtyard, Brokers Hideout, and Riveteers Overlook are intriguing options.  No matter how many times you return them to the battlefield from the graveyard, they will sacrifice again to fetch a Forest from your deck, gaining you a life along the way.

While green isn’t well known for self-milling, there are some options we might want to consider.  Altar of Dementia is one idea; you can sacrifice Gaea Incarnate in response to an exile effect to mill yourself for lands early in the game, and sacrificing Gaea Incarnate to Altar of Dementia late could end up milling an opponent to death. World Shaper’s milling ability is modest, but its ability to bring back lands when it dies provides some backup to Gaea Incarnate’s plan.

Realms Uncharted isn’t milling per se, but it does put two lands into your graveyard at instant speed, and if you do it right before your turn, it could surprise your opponents who weren’t planning on Voice of Gaea’s meld trigger happening on your next upkeep. In a pinch you can use it to find Argoth if you’ve got some way to bring it back from your graveyard.

Green does have another way to self-mill: the dredge mechanic!  Life from the Loam is perfect, letting you grab back Argoth or other lands for value. Golgari Grave-Troll has a huge dredge 6, which will usually mill at least two lands into the graveyard.  The other dredge options for mono-green are lesser cards but worth considering if you’ve got other ways to take advantage of cards in your graveyard.

The Witherbloom theme from Strixhaven: School of Mages involved lifegain and life drain synergies, and Titania, Voice of Gaea’s lifegain ability presents a strong case for including some of those in the deck. Sproutback Trudge is particularly enticing, since if it ends up being put into your graveyard from milling, it should be relatively easy to cast from the graveyard, and a 9/7 trample creature isn’t anything to sneeze at.  I’m also excited to try out Trudge Garden as a way to grind out a small army of 4/4 Fungus Beast tokens in the early part of the game.

Argoth, Sanctum of Nature wants legendary green creatures around to enter the battlefield untapped, and while having Argoth enter tapped isn’t a tragedy, there are plenty of quality green legends you might consider filling out your 99 with. In particular I like Shigeki, Jukai Visionary, since it can come out early to help you ramp, but later on it can pick up cards from the graveyard.  Notably, Shigeki cannot retrieve Argoth from the graveyard since it’s legendary.

I’d like to point out the legendary Questing Beast as worth a slot, since we’re probably going to want to kill people with a gigantic Gaea Incarnate, and you’d hate to get locked out by something like a Spike Weaver trying to prevent combat damage.

Landfall cards live for the sort of land drops this deck will make when Gaea Incarnate hits the battlefield, so I imagine we’ll want some number of these in the 99.  Tireless Tracker and Tireless Provisioner turn those land drops into extra cards or extra mana (or, occasionally with Food tokens, extra life). Avenger of Zendikar is another fantastic choice, letting you go wide while Gaea Incarnate goes very tall.

Scute Swarm obviously will do nutty things here, but for me personally I just don’t want to even think about figuring out all that math!

Multani, Yavimaya’s Avatar and the new Greensleeves, Maro-Sorcerer from Dominaria United Commander love having lots of lands on the battlefield, and both of them make fantastic backup beatdown plans in case your opponents have locked down Gaea Incarnate. I pretty much put Blackblade Reforged in almost all of my Commander decks, but it’ll be even better than normal here where there will be so many lands on the battlefield.

Ashaya, Soul of the World makes all of our nontoken creatures into lands, which might make it easier to protect Gaea Incarnate from an exile effect if we’ve got a way to sacrifice lands on the battlefield.

Lastly, let’s not overlook Gaea Incarnate’s activated ability that can put four +1/+1 counters on a land you control and make it a 0/0 creature.  You can use this to put it on creature-lands like Inkmoth Nexus and Treetop Village, and potentially take advantage of cards like Embodiment of Insight and Sylvan Advocate that boost creature-lands.

It’s interesting to note you can cast Nature’s Embrace on a land in the early-game for mana ramp, and later Gaea Incarnate can animate it and Nature’s Embrace will give it +2/+2, and since it’s still a land, it can tap for two mana of any color.  Neat!

What other cards would you want to play in your Titania, Voice of Gaea deck?  What are the best ways you see to protect Gaea Incarnate from exile effects?