As we all await the official preview season to kick off for Kamigawa: Neon Dynasty, it’s a nice time to pause and take a look at older decks we’ve built and ponder any new tweaks we’ve made recently. This week I’d like examine my Doran, the Siege Tower deck! 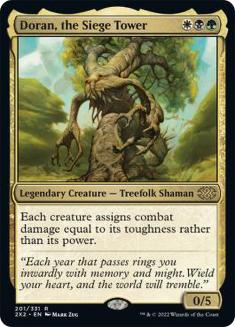 I first built a Commander deck around Doran back in 2009.  I kept it around for a few years but eventually took it apart.  A couple of years ago I acquired a copy of the Judge Gift Card version of Doran from 2017, and I just really loved the new artwork with the autumn leaves!

How could I let this beautiful card just languish in a box on the shelf?  But I didn’t just want to make another toughness-matters deck; while fun, it’s definitely well-trod ground for me personally.  Luckily for me, Strixhaven: School of Mages came out and gave me some inspiration on two fronts.

First, I loved the “life gain, life drain matters” theme from the Witherbloom school, which tied together similarly themed cards in Selesnya and Orzhov into an Abzan shell. Second, I was intrigued by the magecraft mechanic and the notion of playing a heavy percentage of sorcery and instant spells in the deck.

When I build my Commander decks, most of the nonland cards in the deck are permanents: creatures, artifacts, and enchantments. So, if I wanted to unlock magecraft for my Doran deck, I’d need to cut something for more instants and sorceries, and it couldn’t be creatures since Doran’s ability is measured specifically by having high-toughness creatures in your deck. So, bye-bye artifacts and enchantments!

As I started cutting those out of the deck and looking for instant and sorcery spells, something occurred to me:  Abzan has a ton of spells that nuke all artifacts, all enchantments, or both!  If I literally include zero artifacts and enchantments in my deck, these spells wouldn’t affect me at all, but likely would wreck some of my opponents who had invested way too many of their cards in those permanent types.  I even found the notion of being hostile to artifacts and enchantments to be a very old-school green attitude that I could see being expressed by an ancient Treefolk Shaman like Doran; though Abzan in colors, a Treefolk feels very “green.”

A funny thing happened along the way towards fully embracing magecraft: none of the creatures really fit into a Doran deck:

Outside of Clever Luminancer, all of the creatures either had equal power and toughness or power higher than toughness (I’m looking at you, Silverquill Pledgemage), which definitely makes things awkward for a Doran deck.

Even though I ultimately didn’t include any magecraft cards in the deck, I thought it was an interesting deckbuilding exercise to build a deck that’s nothing but creatures, instants, sorceries and lands.  There’s not even a Sol Ring!  With all the noncreature spells there is a ton of interaction, so I usually pull this deck out if I get the sense that my opponent is going to play a lot of high-powered artifact or enchantment synergies.

Destroy All Artifacts and Enchantments

First up are the artifact and enchantment sweepers, and I picked what I thought were the best at various points along the mana curve. Culling Ritual is there to clean up a bunch of mana rocks, Treasures, other tokens, and annoying weenie creatures. Wave of Vitriol is a card I’ve long wanted to play but, as I mentioned, I play way too many artifacts and enchantments to suffer the collateral damage, so I’m thrilled to finally have a slam-dunk home for it.

The heart of a Doran deck is toughness-matters cards, and I’ve included a bunch of them here.  Particularly powerful are the sweepers that will kill a lot of your opponents’ creatures but generally won’t touch yours: Dusk, Fell the Mighty, Wave of Reckoning, and Retribution of the Meek!  Dawn, the aftermath side of Dusk, is a great way to bring nearly all your creatures back to the battlefield.

Nethroi, Apex of Death breaks the rule of every creature having toughness higher than its power, but my intention is to cast this as a seven-mana spell with its mutate cost, bringing back a ton of creatures totaling power ten or less from my graveyard to the battlefield. The mutate card can go under the card, leaving the high-power creature intact while adding deathtouch and lifelink, and a whole bunch of formerly dead friends.

When looking for other high toughness creatures, two of the first creatures I reached for were the Tree of Perdition and Tree of Redemption. With thirteen toughness, these Plants are dangerous blockers with Doran on the battlefield. For other effects that care, the resolving of the ability on each of the Trees has the player gain or lose life when the toughness and life totals switch.

With the asymmetrical battlefield sweepers, your opponents will subject you to battlefield sweepers like Wrath of God, so I like having a card like Selfless Glyphweaver on hand to give creatures you control indestructible. Drawn late-game, the back side Deadly Vanity does a good Duneblast impression, but destroying planeswalkers too!

For lifegain cards and lifegain-matters cards, the king of the mountain is Vito, Thorn of the Dusk Rose… who also happens to have higher toughness than power, so he’s even better in a Doran deck!  So, imagine at the end of an opponent’s turn you activate Tree of Redemption to exchange its toughness of thirteen with your life total (say it’s still at 40).  Then you untap and activate Tree again, which counts as gaining 27 life, and then Vito domes an opponent’s life total for 27 points. And if you happen to have Rhox Faithmender on the battlefield too… yep, shenanigans!

Abzan has a ton of card draw spells and abilities and I’ve included a bunch of them here, particularly creatures with higher toughness than power. Sapling of Colfenor has long been a great card in Doran, but it should be even better here where so many of the cards are creatures.  I’m super-excited to add Welcoming Vampire here, which should draw you an extra card each turn!

I always try to include some other interactive spells and effects too, particularly graveyard control like Bojuka Bog, Deathrite Shaman, and the new Cemetery Prowler.  Nihil Spellbomb is the lone exception to my no-artifacts rule, since it’ll usually get popped off for value before getting swept up in an artifact sweeper.

I very rarely play Demonic Tutor outside of my higher-power decks, but when I opened a Strixhaven Mystical Archive version out of a booster pack, I just had to put it in a deck, and this one seemed like a good choice, since I’m not assembling any unbounded combo and the Tutor will just get an answer or a threat appropriate for the battlefield state.

Last but not least is mana ramp, notable for its lack of Sol Ring!  I put a premium on two-mana ramp for the explicit purpose of fixing my colors, since Doran requires each one of Abzan’s colors to cast and would be lovely to cast on Turn 3. In particular, Farseek and Nature’s Lore can search out Indatha Triome or Murmuring Bosk, which gives you access to any of the three colors you need.

In a way, Ezzaroot Channeler serves as a Sol Ring in the deck, paying commander tax to help recast Doran after being removed from the battlefield.

Here is how the deck graphs out thanks to our friends at Archidekt:

So, what do you think of my Doran, the Siege Tower deck? Is there anything you think I should try out?

Do me a solid and follow me on Twitter!  I run polls and start conversations about Commander all the time, so get in on the fun!  I’d also love it if you followed my Twitch channel TheCompleteCommander, where I do Commander, Brawl and sometimes other Magic-related streams when I can.  If you can’t join me live, the videos are available on demand for a few weeks on Twitch, but I also upload them to my YouTube channel.  You can also find the lists for my decks over on Archidekt if you want to dig into how I put together my own decks and brews.  I’ll be keeping my Grothama list there on Archidekt as I make changes when new sets come out, along with a change log so if you’re a fan of the big green Wurm bookmark it!