One of the cards I’ve always wanted to see in Pioneer is Tezzeret, Agent of Bolas. 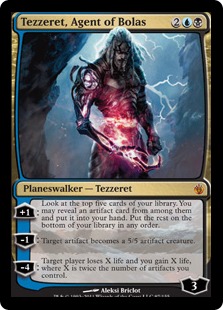 This is one of those planeswalkers that jumps off the page with its ability to both generate card advantage and gain card advantage. Sometimes you could do both at the same time by targeting an otherwise low-value artifact that already generated value like Prophetic Prism. Unfortunately, it had to contend with Caw-Blade during its time in Standard, and the surrounding base of artifacts necessary to make it work wasn’t up to snuff relative to Preordain, Mana Leak, and Stoneforge Mystic.

In Modern, a four-mana planeswalker had a tough time contending with the speed of the format and combo decks like Splinter Twin. And recently it’s been superseded by Urza, Lord High Artificer as the payoff of choice for artifact-centric strategies. Pioneer always seemed like the perfect home, with a larger card pool of cheap artifacts to fill out the deck and less powerful enemies to grapple with.

Of course, there are other Tezzeret planeswalkers in Pioneer, but they’re all more expensive and/or lack the ability of Agent of Bolas to apply significant pressure on the opponent. Midrange decks in Pioneer have to be capable of playing the aggressive role because there are various combo and control decks that have inevitability over you.

After years of waiting, a Tezzeret planeswalker worthy of Pioneer has arrived: 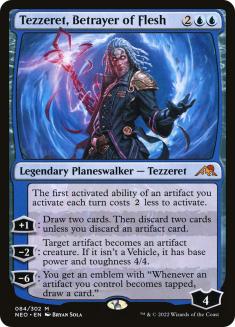 Like Agent of Bolas, Betrayer of Flesh can both create significant threats with its -2 ability and significant card advantage with its +1. Agent of Bolas is more powerful at the former since it doesn’t die after the second straight activation, but I’ll take Betrayer of Flesh’s card advantage since it can find multiple cards off the top and dig for cards that aren’t artifacts if you need a counter, removal spell, etc.

And while Agent of Bolas has the flashier ultimate, since it often wins the game on the spot, I’d say Betrayer of Flesh’s is more likely to turn a loss into a win, since you can quickly snowball with it and otherwise weak cards like Springleaf Drum to run away with a game from a low base of resources. It reads a lot like The Great Henge to me, since the more cards you draw, the more artifacts you’ll find and the more cards the emblem will draw.

Of course, Betrayer of Flesh also has a static ability, which is easy to overlook. With it you can reduce equip costs, turn Witching Well into a more efficient source of card advantage, or even generate mana with something like Prophetic Prism or Terrarion. I’m personally looking forward to sacrificing Clue tokens for free. These small discounts may not seem like much, but they add up to a significant tempo swing in your favor, which is a rare axis for planeswalkers to fight on. And since the rest of the card is exciting enough, all this extra value is simply a bonus.

Our goal in building around Tezzeret is to end up with a midrange deck that has enough card advantage to reasonably win long games, especially against aggressive strategies, but can disrupt and pressure combo and control decks as well. It’s a tough balance to strike when you have to play a high density of artifacts, but with the depth of the Pioneer card pool, I think it’s possible. Having the key card in a single color also helps, since you can pick any supporting colors to compensate for any weaknesses left after exploring what’s available in blue.

Having done that, I’m particularly interested in white as a support color, because using Portable Hole as your cheap removal spell makes it much easier to keep the artifact count high while still having enough disruption. Here’s my current list:

With Portable Hole and Darksteel Citadel to keep the artifact count high, Ingenious Smith is a solid threat that provides card advantage in the matchups where you need to play defensively, and a substantial body when you need to be more aggressive. Keeping the threat density high in a deck that needs to play lots of artifacts and disruption is tough, so Smith is a great addition.

Similarly, Lion Sash is another card from Kamigawa: Neon Dynasty that pulls double-duty as both an artifact and a threat. The graveyard disruption is also welcome in a metagame full of Arclight Phoenixes and Treasure Cruises. I especially like how with a threat that’s an artifact you can use Ingenious Smith to dig for a wide range of effects, from a threat in Lion Sash to mana in Darksteel Citadel, to card advantage in Witching Well to removal in Portable Hole.

The other critical card for this deck is Moonsnare Prototype. Springleaf Drum has been important to accelerating the gameplan of aggressive artifact strategies for years, but in a slower, more interactive shell you don’t have enough cheap creatures to consistently activate it. Moonsnare Prototype lets you tap those Portable Holes and Clue tokens and ramp into an early Tezzeret or double-spell with Sai, Master Thopterist to guarantee some value.

Then, as the game goes on, any Prototypes you draw become versatile removal spells. So this is another card that pulls double duty, thereby ensuring that you have enough interaction while also enabling the deck’s core synergies. Note that channel is an activated ability, so you can use Tezzeret to get a discount on the cost here, even if you’re using it on your opponent’s turn.

Pacification Array and Mazemind Tome are reasonable artifacts that help take advantage of Tezzeret’s static ability. Drawing cards or locking down an opposing creature for free make these cards much more attractive, and they’re both serviceable enough without Tezzeret that you can afford to play them in small numbers.

In the sideboard you see a lot of usual suspects in Soul-Guide Lantern, Mystical Dispute, and Narset, Parter of Veils. Beyond that, Detention Sphere is a versatile removal spell against planeswalkers that also helps answer any Arclight Phoenixes that slip through the cracks. And The Blackstaff of Waterdeep is a great cheap threat against control decks that lets you turn otherwise useless artifacts into threats, all while keeping up mana for your counterspells. As a one-mana artifact you could reasonably maindeck a copy, but I’m not sold that it’ll play well enough against aggressive strategies.

Of course, white isn’t the only support color you can use. Black has several intriguing options that led me to the following list:

Without Portable Hole and Thraben Inspector, Dimir doesn’t offer the same density of artifacts as Azorius, but Blood Fountain creating two artifacts makes this color combination more explosive in terms of getting artifacts onto the battlefield. So I went heavy on improvise with Servo Schematic as another enabler. Those two cards let you enable the artifact synergies while playing premium disruption in Fatal Push and Thoughtseize.

As for improvise cards, Metallic Rebuke is the given, and you also see four copies in the Azorius list. I actually trimmed down to three for this one since you have other improvise cards you want to use and drawing too many can be clunky. Battle at the Bridge is a solid singleton that helps out against aggressive decks, but is too mana inefficient to want to draw frequently. Reverse Engineer is a powerful source of card advantage, sort of acting like this deck’s Ingenious Smith. 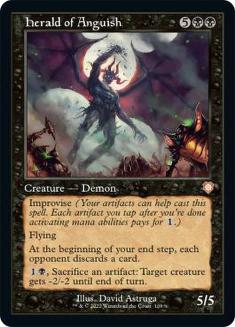 But the real coup here is Herald of Anguish. It generates a ton of card advantage between its two non-keyword abilities and can dominate the battlefield against creature decks, especially when you’re sacrificing Servo Schematics. I’m a bit worried about how prevalent Lightning Axe is in the metagame, but you have Thoughtseize and counterspells to protect it, and it doesn’t take long for the card advantage it generates to become game-breaking.

Sai isn’t as consistent in this shell as it is in Azorius, but the Thopters it generates are valuable as mana producers with improvise, and you want to have more creatures to turn Blood Fountain into a more valuable effect, especially with Tezzeret reducing the cost. This deck also uses the activated ability on Sai more readily than Azorius because it has more fodder to throw away for value.

Overall I’d say this version is going to be the most impressive at its best, but the Azorius list has a more consistent gameplan, especially when you need to get aggressive.

I had Emry in early versions of these decks, but eventually cut it from both. I like that it’s a cheap threat that enables Mox Amber, one of the most powerful cards in all of Pioneer if you can turn it on consistently, but without Mishra’s Bauble it’s tough to get consistent value from the card, and there’s a ton of cheap removal to cleanly trade with it. You’re often casting it for two mana in this deck, and trading your Turn 2 play for a one-mana removal spell is not something I’m interested in doing. So while there is significant upside if the card lives, I doubt you’ll realize that upside very often.

If you had more graveyard synergies to generate value from the triggered ability itself, then it would be different. That would ensure immediate value from Emry in the face of removal, thereby raising its floor considerably. But absent that, the card isn’t worthwhile in my opinion. 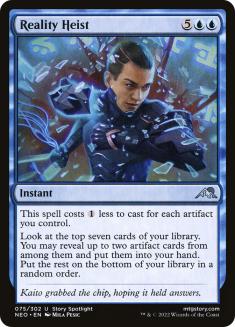 One of the more hyped cards from the recent days of preview season, I think Reality Heist is significantly overrated. It’s tough to get to five artifacts on the battlefield without a bevy of artifact lands. Maybe you could get something going in Modern, but with only Darksteel Citadel in Pioneer, you’re likely spending three or four mana on this card most of the time you cast it. At that rate, I’d rather get the raw volume of cards from Reverse Engineer at a cheaper cost.

Also, the card selection from Heist isn’t as valuable as you might think in proactive strategies, which any deck that enables affinity for artifacts will be. Instead, reactive strategies like control decks looking for specific answers are where these effects shine, which is why you always see Dig Through Time in those decks and Treasure Cruise in more proactive ones when they’re both legal.

The one place where I can see this card making an impact is in Urza decks in Modern that are dedicated to setting up the Thopter Foundry / Sword of the Meek combo. But even there it competes with Whir of Invention. The card advantage from Heist may be more valuable than the toolbox utility of Whir, but it’s not clear-cut. In newer formats it’s too hard to consistently cast this card for two or three mana without resorting to playing a ton of weak cards.

I love that Pioneer is growing in popularity because it’s one of the few places where build-around cards like Tezzeret, Betrayer of Flesh can prosper. Standard rarely has the support cards to make them work, and the barrier to entry in Modern is extremely high now that the Modern Horizons sets have filled the format with cheap threats and disruption. Pioneer is the sweet spot between those two, and as players who have come back to Pioneer and start brewing with cards from Kamigawa: Neon Destiny start to realize this, I hope the format continues to grow.