Hello, and welcome to this edition of Sullivan’s Satchel. This column took its usual break during preview season, as Cedric is inundated with articles about the potential applications of new cards (secondarily) and speculation about bannings of new cards (primarily), during which time there is little interest in my more generalized content, apparently.

This reality dampens my enthusiasm for my typical “summary of current events” introduction, compounded by the fact that I’ve mostly been offline, and once you aren’t refreshing your phone every hour, nearly every conversation becomes inscrutable. It has dawned on me recently how much of my relationship with Magic is centered around witnessing ambient drama, and that, without physical tournaments or aspirational Organized Play, how quickly there’s nothing to yell about. My fingers are crossed that a fight breaks out in Vegas or something, but regardless I hope the people there have a good time, and that Cedric’s Field Bets hold up (you get so many numbers, after all).

With that, the questions. As always, you can submit yours to [email protected] or DM me on Twitter @BasicMountain. I pick the best ones (if my morale is high) or an aggregate sample of overall quality (if my morale is where it typically is) and answer as I go, and the top question wins Question of the Week™, along with $25 in SCG credit, enough to purchase a variety of old Pro Player cards, doodle Garbage Pail Kids-style art onto them, and then post them on Twitter with the people in question tagged, just as a random suggestion of something I’d like someone to do.

Do you think Magic would be a better or worse game if the mana system was pseudo-continuous (e.g., cards could cost 2.5 mana, 1.25 mana, etc.)?

Not really a fan. Typically, these sorts of systems look to solve for problems that stem from not having “enough” numbers, such that carving additional numbers out of nothing is useful. I don’t like this approach at a baseline, simply because “fractional” mana only comes up with other fractional cards, so it isn’t the type of thing you can add in Year 30. Let’s set that aside and assume this was an option from the start.

Magic has shown no end of design space afforded to it with the current mana system, and there’s an additional tracking burden with floating fractional mana than the current system, which has floating mana relatively rarely. Also, elements of Magic’s game engine already accomplish a lot of the upside.

Colored mana requirements and non-deterministic mana development does a lot of work to “fractional” experience; casting a Watchwolf with three Forests and one Plains compared to two Forests and two Plains is materially different in terms of your ability to follow up with another white card in the first case, and with an Elvish Warrior in the second.

Better still, this sort of “fractional” execution is different from game to game and manifests from the entire range of cards you draw, not just the ones that also have fractional requirements.

Lastly, I think an enduring charm of Magic is how dope the mana symbols look, including the colorless one, and fractions make the game appear more daunting to a lot of players and would probably look like crap. I would just stick to colored mana requirements to get the experience in question.

With Clues, Treasures, Food, and now Blood, it feels kinda like we’re in a design era of noncreature tokens as set mechanics. What do you think in general about each of these tokens, and what would you want to see in future token designs?

I like that each of these tokens gives the set some definition, and that it can be a way to alleviate certain mechanical burdens that require too much space in a file to come through in Draft. For example, if you want to lean into artifact mana, doing Treasure prevents you from having to make a million Diamonds at low rarity to make that work, and if you want to do graveyard/madness-type stuff, you can do Blood instead of a ton of looters and self-mill. Treasure and Blood have plenty of application and context in “normal” games, so you can use these tokens to grease the wheels on certain mechanics with something that has broad appeal and use.

I dislike the fact that these tokens typically engender some level of color pie bleed. I have typically not been a fan of the “Token X Matters” stuff in lieu of making a variety of sweet designs that someone may happen to play with one or two of, and I think it’s important they they are on diminishing returns. Food grades out here the worst by a mile — most pronounced color pie bleed, has leaned very heavily into the “make a bunch of this” experience, and with enough Food your position can become unassailable.

Treasure is probably the most “color pie neutral” of the bunch and has some level of diminishing returns, or at least is somewhat context-driven — you can run out of stuff to do with your mana. I think it’s the best of the bunch. I’m neutral-positive on Blood — very loud diminishing returns in most cases, plus costs mana, and I love Clues in small doses, but that experience falls off a cliff for me pretty quickly past a certain point.

I think there are a variety of tokens I could imagine being simple and playing well enough to introduce, but to me the battle is much more about “make sure not to make the game about having a ton of these laying around” and less about the specific mechanics of the token.

Does the difficulty in designing multicolor lands that benefit aggro decks but not control decks, e.g. Scars of Mirrodin fastlands, mean that three-plus-color aggro decks are just doomed to always having worse mana?

I don’t think it is that hard to design lands specifically for aggro. The fastlands are an obvious example, but I’d argue that Stomping Ground and Adarkar Wastes are both more powerful for aggressive decks than defensive ones (even if both appear in a variety of decks, when legal). City of Brass and Mana Confluence rarely appear even in three-plus-color control decks, and neither have Gemstone Mine or Undiscovered Paradise.

All these lands have a certain thing in common — trading life, sustainability, or the ability to play expensive cards broadly in exchange for making multiple colors of mana the turn it enters the battlefield. I could crank out a dozen such designs without too much difficulty, though I promise you it won’t be the most appealing bunch.

I don’t think subsidizing three-plus-color aggro is a very good thing anyway. The biggest reason to support multicolored decks is the synergies that can emerge through multiple colors, but multicolored aggro decks are more often a collection of random rates instead of something synergistic. I would point to Modern Humans as an example of the “right way,” and it’s instructive to me that their manabase is oriented around a ton of five-color fixing in exchange for playing with a specific class of card, rather than a bunch of busted, generic duals. There are ways to do it that are positive, but it requires a lot of discipline.

Lastly, the Question of the Week™, and winner of $25 in SCG Credit, from Kacey:

I’m curious about your thoughts on the Crimson Vow Odric and specifically how the localization and accessibility constraints of a physical text box should impact card design. The adage is usually that restrictions breed creativity but in this case I think a lot of players are mostly experiencing frustration from the text box restriction.

Check this card out: 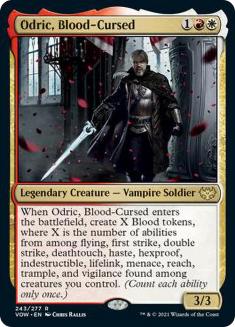 For those of you not familiar with such terms, “localization” is the act of translating cards (or anything, really) into whatever languages Magic sees print in. It is not hard to imagine a design like Odric not being able to fit into a text box in a number of languages. At what point do you scale back/scrap a design due to such considerations?

It’s worth noting that these issues crop up regardless of localization. At a certain number of lines or characters, things either don’t fit, require a smaller font (doubly taxing on a design that’s already long), or can’t fit reminder/rules text (again, more burdensome on a longer design). And with localization, certain idiomatic phrases don’t translate cleanly into each language, so there are times it’s appropriate to push back on certain names or phrases, even if length isn’t the issue.

Over time I’ve come to believe more and more in these constraints as Best Practices, even if there weren’t practical reasons for doing it. Reading really long cards sucks, and that experience gets more powerful with each additional word that gets added. Show a little restraint. Anyhow, what’s the critique here, that Odric doesn’t list off literally every keyword in the game? I simply don’t believe that the fun of this design is centered around if you get a Blood for having a creature with skulk.

Something I’m fond of saying is, “It is useful to treat each card like a tiny piece of an overall experience, not an accused in need of a defense attorney.” Whatever the additional, fractional fun of Odric referencing more keywords (I’m skeptical this is fun, to begin with) is a drop in the water compared to having coherent systems around text box length, to cleanly translate the game to a worldwide base of players, and to aspire to have the cards be readable by people who like to do things other than read Magic cards all day long.