Hello, and welcome to this edition of Sullivan’s Satchel. I have just returned from a camping trip, completely depleted, sunburned, still wallowing in the aftermath of poorly-stored meat, and all the other wonders that awaits unprepared travelers in Western Colorado. The biggest benefit was a weekend of sporadic internet, mostly keeping me off Twitter and the usual Magic drama thereof. I’m not one to judge, necessarily. I stir up plenty myself, and what is the point of the website if not to let off steam and then have that steam affirmed through likes and retweets from personal friends and sycophants? (Not a rhetorical question: there is no point.) But it is telling, when I take such sabbaticals, how much drama that not only do I miss, but that I can’t even piece together. This calls into question what behavior is required to stay on top of it, which I usually do, more or less, and then there’s a bunch of fallout thinking about what that means about what my usual behavior is, but then I mentally pull back at the water’s edge. And on it goes.

I’m still enjoying the Modern Horizons 2 previews. A few things I put my finger on the scale for got shown. I don’t think it’s professionally acceptable to call out which cards and in what manner, but they are some of the bigger bets in the file (in my opinion) and responses were varied. I think they will make the format more fun but maybe they don’t. You’ll know which ones were “mine” in the future if they’re the former, and I’ll never cop to the latter. This is what is known in game design circles as “managing your narrative” and it’s something I and many of my colleagues have gotten quite good at.

With that, the questions. As always, you can send in yours to [email protected] or DM on Twitter @BasicMountain. I answer even the halfway decent ones as they come in, and each week I pick one as the winner (usually, sometimes it’s dry out here) and the author of that question receives $25 in SCG credit. I recently used some of mine for some wildly under market Spirebluff Canals, so make sure to dig through everything.

How do you approach designing a high powered set like Modern Horizons 2 with potentially problematic mechanics (e.g., Storm)? Is there anything atypical about your process (relative to a typical Standard set)?

It’s quite a bit different. What I optimize for is different than other team members or designers so I’m not suggesting that this is “the approach”, just how I think about the space. (Quick Aside: I don’t think storm is “problematic” at a baseline. I think storm cards that kill your opponent at a certain threshold, immediately and from hand, is the issue. I think Empty the Warrens is a fine design, eyes open, and Tendrils of Agony is not. Still reasonable to choose not to do it, but I think storm has a bad rap relative to how good the design space is in absolute terms, just a few bad designs warp the experience.)

The big thing is that the set is pointed towards Modern, and then formats older and more powerful than it. I put a lot of value in fan service — give each deck something at least plausible. Every player of fringe decks, like Merfolk, 8-Rack, Mill (maybe not fringe anymore, I guess) should look at the set and find at least one appealing card. Standard has elements of that, of giving tools to fill out decks, but I think in Modern Horizons sets it should make up a much greater percentage of the overall file than the typical Standard release.

Older formats also gravitate towards cheap cards, and so it can be tempting to indulge that; it’s an easy, reliable way to get cards over. I think this should be avoided as much as possible. For example, I think Urza, Lord High Artificer is a great bet to make among the best cards in the set, in large part because it’s relatively expensive. That isn’t say to do nothing good at zero or one, but better to be reactive than proactive, and to the extent it is proactive, try to give it a different dimension than other ostensibly similar proactive cards already in the format. As a recent example, maybe Ragavan, Nimble Pilferer is “too strong” (strikes me as pretty obviously out of bounds for Standard, which is a useful benchmark) but it doesn’t have haste, has one toughness, and suggests a desire to play a longer game. Maybe it ends up being stronger than Goblin Guide or Monastery Swiftspear, but it’s at least quite a bit different, and so the decks play differently even if it ends up becoming a staple. I think that makes way more sense as a design than a hypothetical Goblin Guide with a slightly different drawback.

The price point of the set is such that I think more weight should be given to “novelty” than “balance” for limited play. A lot of people will only draft once; make sure they get to do something cool and see other people doing different, cool stuff. That isn’t to say throw balance out the window, just that I would trade in a fair bit of it to get more memorable early experiences, relative to how those thing typically bear out in the Standard releases.

After playing Legacy Cube this cycle, I feel it’s the worse than most of the other MTGO Cubes. Its missing the power level of Vintage but doesn’t have the uniqueness of things like Mengu or Nega cube. What do you think about this, and/or what is your favorite MTGO cube?

I’m essentially in agreement. Legacy Cube is my least-favorite. I enjoy the power level outliers and the feeling of “anything is possible” that Vintage Cube inspires. I love the player-designed cubes — I think it gives a unique insight into their skills as game designers, and they are crafted with love and care. Emma’s Proliferate Cube is particularly inspired and is a big reason why I’m bullish on her career at WotC (and I’m not short on reasons).

Related: I think people looking to get into game design, particularly on Magic, would be well-served to get into Cube design. This is even more the case with the future of competitive play up in the air, but even if that wasn’t a consideration I’d feel the same way. Part of game design is the process of curation — there are only so many slots to go around, and Cube forces fledgling game designers to make tough cuts for difficult reasons. I think that’s more analogous to the work than doing well at GPs or whatever.

[Paraphrasing] Do you offer coaching services?

I do not. It’s unfathomable to me that someone would reach out to me over the hundreds of options available on Twitter and elsewhere, and what I bill for my time as a game designer (which is what I have to anchor it to, since it is hourly labor) would be insulting to respond to someone’s request with. Two options available:

I literally have no idea. I’m guessing just rate/play pattern? But I don’t think there’s a consistent heuristic.

Lastly, the Question of the Week, and winner of $25 in SCG credit, from Matt:

Question for the satchel: Related to The Resleevables discussion surrounding the Kaldra cycle, what are your opinions on Gate to the Afterlife/God-Pharaoh’s Gift? Is this the appropriate power level to make things like this interesting? I seem to remember lots of hype around finding out what God Pharaoh’s Gift would actually do and then it actually turned out to be a card that led to some interesting decks. If they do another cycle/group of cards like this in the future can it be pushed further or is this the sweet spot as far as fun and interesting while not being overpowering?

I’m assuming you’re largely referencing cards that allude to cards coming in a future set. I think that can be cool in very, very small doses. It assumes a level of investment for players to “get” the joke; nothing more frustrating for a newer or less engaged player to be inspired to build around a card, only to find the card doesn’t even exist. I also think they’re disproportionally distracting and I like for the sets to make themselves the star of the show while their new, not just build anticipation for future releases. But for a good story beat or particularly juicy mechanical execution I think there can be good stuff there. 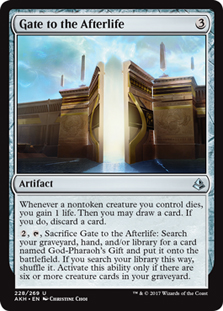 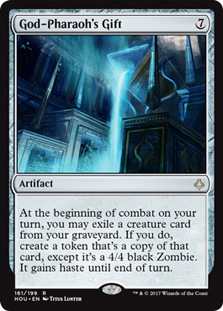 As far as Gate to the Afterlife/God-Pharaoh’s Gift, I think it’s well above average. Both cards work just fine as individual game pieces but they synergize well, beyond Gate referencing Gift. I don’t think Gift is the most fun way to conclude a game; it ‘s often in this weird intersection of “lots of choices” meets “so much power if uncontested that the decisions don’t really matter”, and I’m not the biggest fan of seven-mana cards that create a grindy-but-inevitable advantage. But there’s a difference between it sticking on the battlefield for one turns versus two versus forever, and it does inform deck building in a cool, novel way. For what it is I think the rate is just about perfect, and it scratched an itch for a certain demographic at a rate that’s plausible but not overwhelming. Given how hard it is to get all these different considerations correct I think the set of designs is pretty successful.