Each week I’m going to take an in-depth look at a single Adventures in the Forgotten Realms Commander preconstructed deck to see if it’s worth buying simply to acquire the parts rather than buying the singles individually. Last week I took a look at Dungeons of Death, the Esper deck focused on venturing into the dungeon, so be sure to check that out if you haven’t already.

This week I’m breaking down Draconic Rage, a Gruul beatdown deck that has a pretty heavy Dragon theme running in it.  If you’re interested in keeping Draconic Rage mostly intact and are just looking for ways to upgrade it, be sure to check out the Upgrades! video by StarCityGames.com’s own Jeremy Noell and Jonathan Suarez:

Before I dig into the details, I’d like to say bravo to the designers of all the Commander decks on their manabases. Three of the four decks have 39 lands, and the other has 38 lands. The lands include solid Tier 2 dual lands like Game Trail and Cinder Glade. Not a Guildgate or a Temple of the False God to be found!

For $40, you get $55 in non-bulk value.  If all you want are the new cards, you can buy them all (assuming no outage) for around $33.  For just seven dollars more you can get $22 in notable reprints, so be sure to check out that section below to see whether you may have use for them. 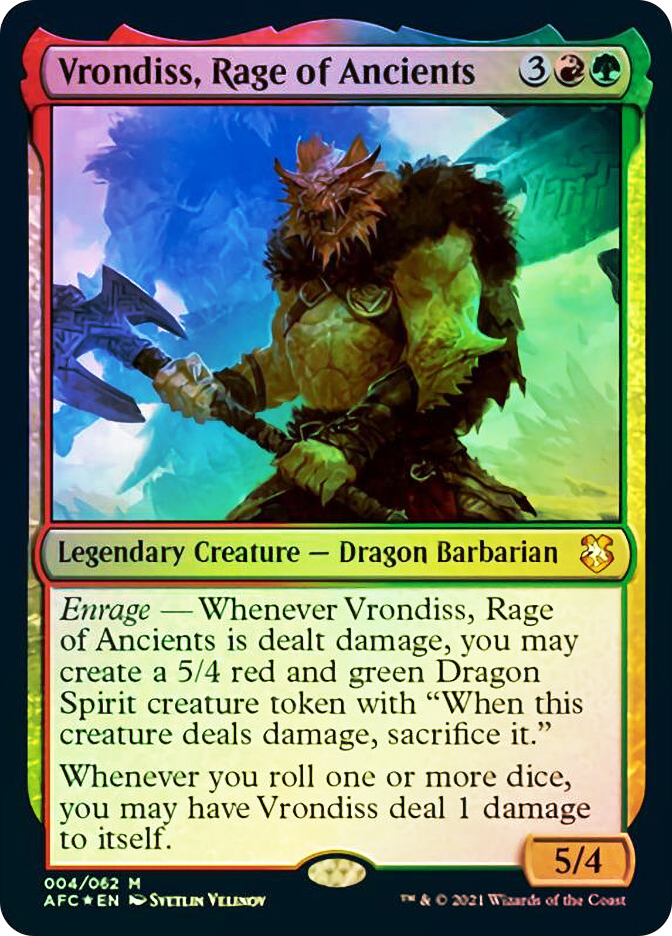 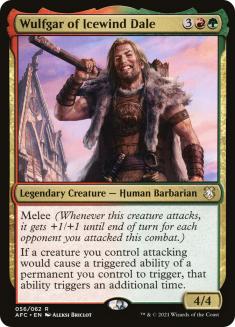 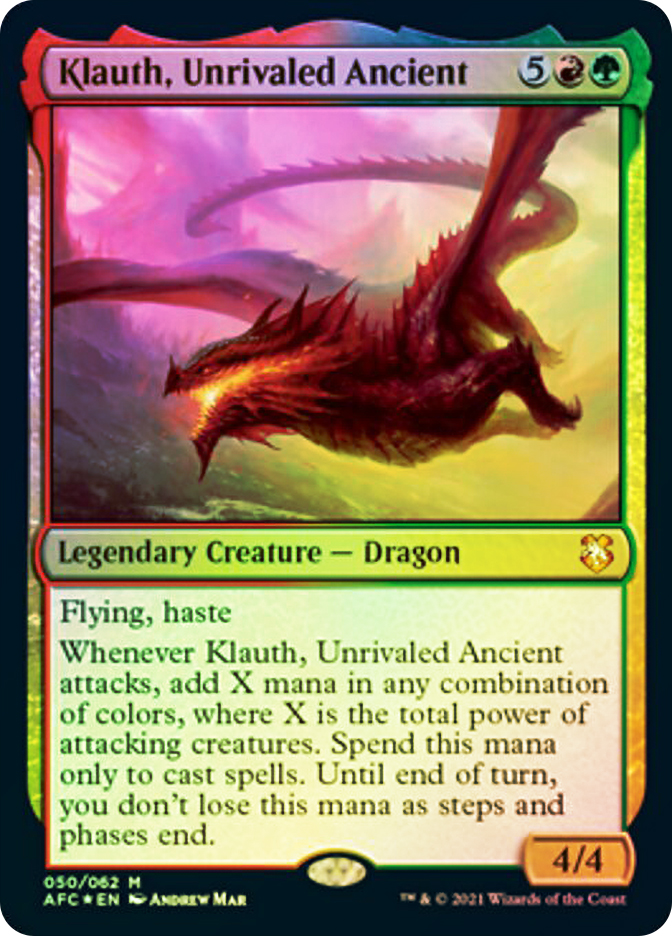 I need to say that I’ve been incredibly impressed by so many Gruul legends that have been printed in recent years.  All of them “feel Gruul” in being aggressive, and yet so many of them suggest quite different takes on decks built around them.

Neyith encourages an emphasis on fight spells and various ways to force blocks. Radha provides incremental value of playing lands off the top of your deck and turns into a huge late-game threat once there are lots of lands on the battlefield. “Godzilla, King of the Monsters” encourages “power matters” strategies, and my main Tahngarth is a great goad commander since it likes to join the attack party whenever it can.

Vrondiss, Rage of Ancients is a ground-bound Dragon that benefits from all sorts of sweet Dragon tribal support such as Dragon’s Hoard, Dragonspeaker Shaman, and Spit Flame.

The deck comes with a lot of dice-rolling cards that can cause Vrondiss to deal damage to itself to make tokens, but you can certainly dig up some more from Adventures in the Forgotten Realms.  Also, cards like Pyrohemia, Brash Taunter and Marauding Raptor are great ways to trigger Vrondiss’s enrage ability outside of the dice-rolling.

Let’s not forget the fact that Vrondiss makes some impressively sized token creatures—whopping 5/4 Dragon Spirits!  Even though they deal damage only once before being sacrificed, that’s still significant battlefield presence and you can build in cards that care about token creatures—Doubling Season, Parallel Lives, and the often-forgotten Idol of Oblivion.

Lastly, make note that neither Vrondiss nor their tokens have evasion, so I’d probably find room for ways to give all creatures trample.  Garruk’s Uprising is a slam dunk here, along with Goreclaw, Terror of Qal Sisma and Thunderfoot Baloth.  I really like Vrondiss and plan on building a paper Commander deck with them to join my three other Gruul decks.

Wulfgar of Icewind Dale gives us a commander where “attack triggers matter,” which is narrow and niche enough to be cool and off the beaten path. I’m looking at cards like Werewolf Pack Leader; Blossoming Bogbeast; Etali, Primal Storm; and Elder Gargaroth. Kogla, the Titan Ape has a sweet attacking trigger and its ability to give itself indestructible by returning a Human you control to your hand can come in handy for saving Wulfgar from unfortunate removal spells. If I end up retiring one of my other Gruul decks, I imagine I’ll reach for Wulfgar to replace it.

Then there’s Klauth, Unrivaled Ancient, which also has an attack trigger and could be in the same deck alongside Wulfgar. Klauth’s ability to give you mana is quite potent with enough high-power creatures, but you can’t use that mana to activate abilities, only to cast spells. Combat Instant spells make great inclusions here, like Savage Beating, Return of the Wildspeaker or even something old school like Vitalizing Wind. This might also be the sort of deck where cards like Crackle with Power and Pest Infestation might shine. Klauth is going in my Vrondiss deck and I’m also sliding a copy into my The Ur-Dragon tribal deck.

Dragonborn Champion and Chaos Dragon seem like perfect inclusions in a Vrondiss deck. Chaos Dragon is also a perfectly respectable card to add to a Dragon deck or other aggressive red deck. As a Spirit Dragon, Vengeful Ancestor is another solid addition to a Vrondiss deck, but I’m also putting it into my Tahngarth, First Mate deck since goad is so useful there. I could see adding it into the 99 of Karazikar, the Eye Tyrant; Kardur, Doomscourge; and Thantis, the Warweaver too.

For dice-rolling synergies – such as Vrondiss – there are plenty of new cards to choose from: Neverwinter Hydra, Berserker’s Frenzy, Maddening Hex, Wild Endeavor, Reckless Endeavor, Bag of Tricks, Component Pouch, and Underdark Rift. If you’re building a Delina, Wild Mage deck, there are some great red spells available here.

A few quick words about Wild Endeavor—I actually think this is a pretty solid card.  The median result will be to ramp you by two basic lands and put two 3/3 creatures on the battlefield, and if you have dice-rolling synergies or token creature synergies, even the dreaded double one roll can still squeak out value.  And if you roll two fours?  Boom!

Sword of Hours also plays nicely with dice-rolling strategies, but it’s also awesome with the countless +1/+1 counter strategies out there.  Consider it in Commander decks like Atraxa, Praetors’ Voice; Skullbriar, the Walking Grave; and Marchesa, the Black Rose.

Unsurprisingly Klauth’s Will goes great in a deck with Klauth, Unrivaled Ancient, but any deck that can generate a bunch of mana can get a lot of mileage out of this deck if your creatures mostly fly or have high toughness. In particular I could see it doing work in a deck with Ramos, Dragon Engine.

Druid of Purification is the priciest of the new cards in this deck outside of Klauth. I’m not entirely convinced since so much of the card’s effectiveness relies on your opponents being willing to destroy enchantments or artifacts between them thanks to a card that you cast. I can see opponents refusing to join in, making this an overpriced Reclamation Sage. Still, I’d like to try it out and see how it plays, especially if you have ways to reuse it in something like Emiel the Blessed or Karador, Ghost Chieftain.

Skyline Despot, Rishkar’s Expertise, and Kindred Summons had all crept up there in price, so it was really nice to see them again. All of them are solid cards that can go in a wide variety of decks. I have Skyline Despot in my Jared Carthalion, True Heir and my Feldon of the Third Path decks and am happy to have another copy. There is a lot of competition for quality card draw in green these days, but Rishkar’s Expertise is often worth considering if your commander has a high-enough power. In particular you’re going to want it for your Ghalta, Primal Hunter or Multani, Yavimaya’s Avatar decks.

Kindred Summons is a little more niche—you want a tribal deck that can put a lot of creatures on the battlefield and also generate a lot of mana. The obvious choice here is an Elf deck, and that’s where Kindred Summons being an instant really shines. When playing against an Elf deck you’ve got to balance between playing your own game and shifting focus toward dealing with the ever-growing Elven threat, and that math can really get screwed up when you cast Kindred Summons during an inopportune moment. Keep an eye on Werewolf tribal support from the Innistrad sets coming in a few months too.

Last but certainly not least are Sol Ring and Arcane Signet, excellent cards in countless Commander decks. I’m always happy to have extras of these.

So, what do you think? Will you be buying Draconic Rage for parts or just investing in some singles?  Which of the new cards and legends are you excited to try out, and in what decks?