I don’t play much Legacy these days. The format was rarely relevant for paper events and likely won’t be anytime soon. But one of the decks I wished I’d played in the format’s heyday on the SCG Tour is Sam Black’s Zombie Bombardment:

I was playing Maverick in those days, and wasn’t confident enough in my abilities to switch decks all that often. I spent most of that year changing five or six cards in my 150 each week with the aforementioned Maverick and Azorius Delver in Standard (which was absolutely busted in case you’re too young to remember it). But Sam Black’s deck was completely foreign to Legacy at the time, and while many players were content with dismissing his success as more a product of his skill than the deck’s strength, there was a lot to like there.

What really drew me to the deck was how versatile it was. It could play a resource-light game by stripping a linear opponent of most of their resources with discard and apply enough pressure with various small creatures. Those same recursive threats, in combination with Lingering Souls and Faithless Looting, allowed you to play a long game against decks with lots of removal. And against creature decks, you had Goblin Bombardment to either control their battlefield and win via attrition or set up a single-turn combo kill with a boatload of creatures. 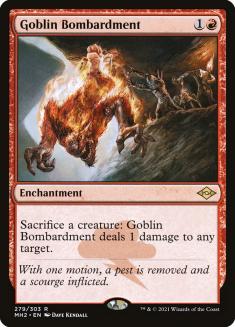 The rest of the deck wasn’t well set up against creature decks, like my own Maverick, since your discard quickly becomes irrelevant and the various Gravecrawlers and Bloodghasts aren’t equipped to rumble against the likes of Scavenging Ooze and Knight of the Reliquary, no matter how many times they come back from the dead. But Goblin Bombardment was a complete trump card that’s powerful enough in other matchups to justify a maindeck inclusion.

Sacrifice decks often struggle against opposing creature decks because they play weaker creatures that don’t excel in combat and little in the way of disruption because so much space is needed to fully develop the deck’s internal synergies. The trio of Mayhem Devil, Priest of Forgotten Gods, and Claim the Firstborn flipped that script in Standard and Historic recently, but those cards haven’t been powerful enough to make an impact in Modern.

Cabal Therapy and Faithless Looting are significant missing pieces, but most of Sam’s deck is Modern-legal, so my first thought was to port the deck over:

Stitcher’s Supplier wasn’t around back in 2012, but I strongly suspect Sam would’ve had it in the list. It’s excellent with the small graveyard engine, often acting as an Elvish Visionary of sorts, but with a more relevant creature type. With that many Zombies already in the deck, I decided to push the theme further with Undead Augur, offering some of the card advantage lost from Faithless Looting discarding Bloodghasts and whatnot.

However, losing access to Looting does make Bloodghast, and to a lesser extent Gravecrawler, much worse, since you really don’t want to cast them from your hand. Stitcher’s Supplier only does so much to mitigate the issue since it doesn’t take copies that you happen to draw out of your hand. So I’ve included both Collective Brutality and Cryptbreaker as ways to do so.

Brutality isn’t what it used to be in Modern, but it synergizes excellently with the deck and offers necessary interaction against nearly any strategy. And there are some relative newcomers to the Modern metagame that it can be quite effective against. It tags Elvish Reclaimer against Scapeshift and strips Collected Company from Selesnya Company decks. I suspect the card is a little underrated right now, and this deck takes full advantage of it. 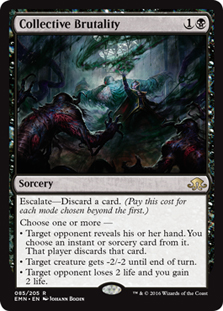 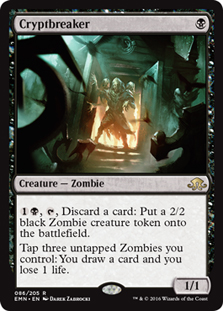 Cryptbreaker is more speculative, but I wanted to push the tribal synergies as far as possible. It’s a liability against Lava Dart and Wrenn and Six, but it’s pretty easy to get a card of value from it, and any more than that makes it excellent. If Cryptbreaker doesn’t work out, I’ll try a pair of Blood Artists in that slot in order to further the combo potential of the deck, though I’m skeptical of a two-mana creature with one toughness.

If playing a couple of weak cards is the cost of maximizing Gravecrawler and Bloodghast it’ll be worthwhile, because those cards turbo-charge the sacrifice synergies, letting you grow Carrion Feeder quickly or activate Goblin Bombardment multiple times per turn. It’s only with that potential that the deck can cross the threshold into a Modern-appropriate power level so I’ll do whatever is necessary to make those cards work.

Ultimately this deck lines up pretty well with the original’s design. There’s a little less discard but more removal, which makes sense given the complexion of the Modern metagame compared to Legacy in that time. It’s a bit more threat-dense, especially with the addition of Lurrus of the Dream-Den, which mostly comes along for free here. Mishra’s Bauble wouldn’t make the cut without it, but there are plenty of fetchlands because of Bloodghast so it comes at a very low opportunity cost.

All those fetchlands do come at a cost, and if the land count were higher I’d be inclined to play a second copy of Urborg, Tomb of Yawgmoth so you could keep your fetchlands on the battlefield in matchups where your life total is threatened, or just to wait until you have plenty of Bloodghasts to take advantage of the landfall triggers. This isn’t a deck where you want to aggressively thin your library with fetchlands. Keep them around if possible because each bit of value is important.

Moving beyond the Zombie theme, I wanted to build a straightforward Sacrifice deck, with all the best tools at Modern’s disposal. Doing so meant that Collective Brutality and especially Cryptbreaker may not be appropriate, so the deck would need another way to get around casting Bloodghast. Aether Vial plays well in a deck that wants to play to the battlefield anyway, and using it to get Bloodghast onto the battlefield, while not as synergistic as discarding it, is much more palatable than spending two mana. That line of thinking led to the following list:

Mogg War Marshal is the big gain here, offering three bodies for the low cost of two mana. With that in the deck, I really wanted access to Village Rites, though that has led to an end product that has a low creature count for an Aether Vial deck. That said, the velocity from Village Rites should make the deck play out like it has a higher creature count than it does on paper, since you see more cards on average. 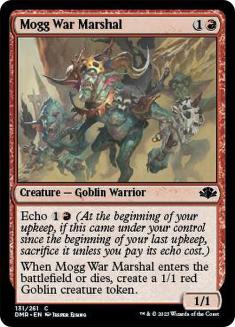 I also made the tough decision to give up Lurrus in this list in order to play Mayhem Devil. All the extra bodies meant that I really wanted to push the combo potential of this list, and Mayhem Devil is much better than Blood Artist or Zulaport Cutthroat in that role. It’s great in combination with Goblin Bombardment, letting you deal huge amounts of damage from a relatively low base of resources.

This combo potential is not only important in creature matchups, but against control and combo as well. There isn’t nearly the same level of disruption in this list as with the first, so you’ll be racing against any deck with a more powerful late-game or a combo finish of its own. With Aether Vial, you can easily go from a creature or two on the battlefield to lethal damage, taking your opponent by surprise.

With this extra damage output, Lightning Bolt may prove to be unnecessary, but with Prowess decks being so popular I’m playing it safe to start. I’d likely play the fourth copy of Village Rites as well as two other threats. There are plenty of options to try in those slots, such as additional copies of Kroxa, Titan of Death’s Hunger; Smuggler’s Copter; Judith, the Scourge Diva; Woe Strider; Greater Gargadon; Falkenrath Aristocrat; or Yawgmoth, Thran Physician. So feel free to experiment.

Zombie Isn’t the Only Tribe in Town

The final list I have featuring Goblin Bombardment is perhaps the most on-theme, because I’m moving away from the Zombie tribe and into actual Goblins.

This list misses out on the synergies with Gravecrawler and Bloodghast, but the Goblin tribe is proven in Modern, even if it’s only a fringe archetype right now. Munitions Expert and Goblin Matron are good cards, and Skirk Prospector is an excellent sacrifice outlet. Even without the Zombies, there are definitely Modern-level synergies going on here.

Matron is especially good in a synergy-driven strategy since it lets you assemble all the right pieces consistently. It also makes Unearth a great card, effectively turning it into a one-mana Demonic Tutor when you can so easily get Goblin Matron into your graveyard with the various sacrifice effects.

With Goblins already wanting Aether Vial, I think Mayhem Devil is an easy inclusion. It’s the main card here that takes the sacrifice outlets to the next level, so it earns its place as the only non-Goblin in the list. Pashalik Mons is very similar in this shell, so it’s possible that you want more copies of it over some Mayhem Devils to keep the Goblin count high, but we’re not playing as many Goblin Ringleaders so that’s less of a concern, and with Goblin Matron you have access to the single copy quite often. Since this deck wants as many creatures as possible, you get punished for drawing multiple copies of any legend, so I think just the singleton is enough. 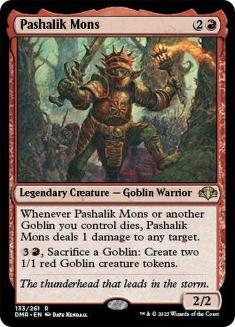 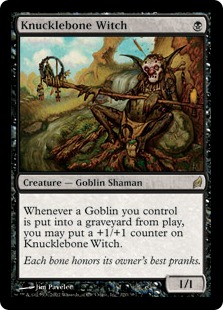 Knucklebone Witch is a weak individual card, but offers this deck an avenue to create a large threat, which should help you break through stalled battlefields as well as play defense against opposing creature decks. I don’t want to draw too many of them, but it’s a low investment for an effect that brings a different angle of attack and defense to the deck. Witch also lets you get aggressive in matchups where you need to race, which is important in a Goblins list that doesn’t have access to the Conspicuous Snoop combo or threats like Goblin Chieftain.

Goblin Bombardment is an exciting card for devotees of sacrifice strategies. It’s a simple effect but does so many little things to help you win. It can play defense or offense and transition between the two instantly. As another sacrifice effect with no mana cost to activate, it allows you to build powerful synergies that approximate the power of a combo deck if left unchecked.

It’s been a somewhat strange, Squirrel-filled week to kick off Modern Horizons 2 preview season, but things are picking up now and we’re seeing plenty of cards that will be sure to have an impact on the format. I’m looking forward to seeing what comes next.