It feels like, through no fault of its own, the SCG Tour Online’s return to action came just one week too late. Forced blackouts prevented SCG from running tournaments at the very onset of the new format, and instead of the two weeks of unfiltered joy and exploration we had at the start of the format, the SCG Tour got on the scene just after the two best decks in the format had made themselves known.

Make no mistake, Mono-Green Aggro❄ and Izzet Epiphany sit in a league of their own in terms of representation, win-rates, and just passing my own eyeball test as the most powerful thing you can be doing. The good news is that makes our job as metagame evaluators extremely clear. First, we look for the best builds of Mono-Green Aggro❄ and Izzet Epiphany. Second, we look for decks that are uniquely set up to challenge both those top contenders. With the lists above, I think we’ve completed the first stage of our analysis.

Hironori Tanaka was the highest placing Izzet Epiphany player on a day where the archetype put up some pretty ordinary results. This reversion to the mean doesn’t really shock me, given the level of influence that Izzet Epiphany exerts on the format. Basically, you play a linear aggro deck that can outrace its removal, or you can’t exist. If the format is reduced to just those poles, Izzet Epiphany will experience its share of ups and downs. Truthfully, too much attention was probably paid to the mirror by Izzet Epiphany players on Sunday, and I expect that the deck will correct coming out of this weekend.

Tanaka showed more respect to the aggro menace than most, particularly in their inclusion of maindeck Burning Hands and Demon Bolt. Demon Bolt is just fantastic at hitting all the critical threats right now, especially Faceless Haven. I do think Faceless Haven also demands Field of Ruin though, and I’m surprised to see Tanaka move away from its inclusion. 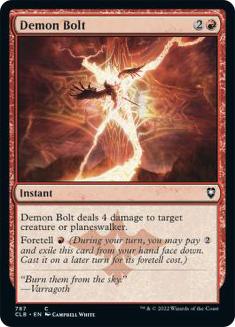 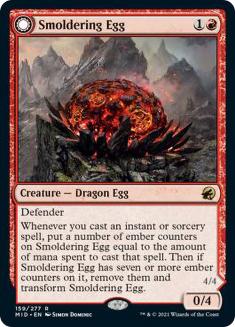 The other big shift Tanaka made was to maindeck Smoldering Egg, and I’m definitely into this move. The lifegain output from an 0/4 blocker is substantial right now, and aggro decks have gotten more and more linear, with fewer Brutal Cathars, Inscription of Abundance, and the like showing up in lists. If you can catch an opponent without removal spells, Smoldering Egg might just take over. I don’t love it in the mirror, especially if Demon Bolt is going to catch on, but let’s see how attendance rates for Izzet Epiphany track over the next couple weeks.

I’ll admit, I’m probably highlighting Hideaki Muraoka’s Mono-Green list because it reminds me so much of my own, right down to the three Lotus Cobra and reduced Lair of the Hydra count. If you haven’t yet played with Mono-Green Aggro❄, you owe yourself the experience. It’s an aggro deck unlike many others in Magic history — brutally fast and efficient but also loaded with card advantage, resiliency, and high-quality removal.

While Muraoka isn’t doing anything revolutionary in the maindeck, I do love their sideboard setup, particularly with Unnatural Growth relegated to matchup-specific duty. The card is unquestionably powerful, but I don’t love it in situations where we’re doing anything other than racing. Obviously, that’s the core plan against Izzet Epiphany so it shines in that matchup, but almost everywhere else removal and bodies are going to serve us better. Of course, Simon Nielsen had three copies of Unnatural Growth maindeck in his tournament winning Mono-Green Aggro❄ list, so maybe I’m just backwards here.

Figuring out how to get the most from your sideboard is going to be one of the big hurdles for Mono-Green Aggro❄ in the coming weeks as the target shifts rapidly in its direction. Lucky for this deck, its core is so strong that it can get by with far less sideboard help than most other decks.

So we’ve got solid versions of the best decks to continue to iterate on. It’s time for the second stage of analysis, and unfortunately, this is where things get a little sticky. The nature of Izzet Epiphany means that you’re limited to challenging the deck on the stack. Meanwhile, Mono-Green Aggro❄ demands an intense focus on the battlefield.

These two decks are so good at their respective jobs, and so diametrically opposed, that it’s going to be a real struggle to find something suited to the task of challenging both prongs of the metagame at once. If such a contender does exist, it’s likely it will come in the form of another linear strategy akin to Mono-Green with a little bit more speed.

This starting to sound like any of the decks you’ve seen floating around?

Ultimately, Mono-White Aggro❄ decks are going to have to hedge towards either Mono-Green Aggro❄ or Izzet Epiphany, and I think Andrea chose correctly this weekend in letting the other players clean up Izzet Epiphany for them and focusing on the Mono-Green Aggro❄ matchup. This means less pure clock, and more interaction with creatures like Brutal Cathar and Skyclave Apparition. I also support the full four copies of Sungold Sentinel being present, as in my experience it’s been the absolute best way to find reach once battlefields start to get a little crowded. I’m a little suspicious of Stonebinder’s Familiar over something like Monk of the Open Hand or Codespell Cleric, but maybe I’m underestimating how consistently this will just be a 2/2 for one-mana.

Honestly, I don’t think it would be unreasonable for this article to end here. I expect the two viable options for the foreseeable future to be monocolor aggro and Izzet decks with Alrund’s Epiphany. Still, some players tried their best, and while there was only one exception to this dichotomy in the entire Top 20, things opened up a bit as we got deeper into the field.

I had been working on a more aggressive take on Jund for quite some time before abandoning it in the face of Izzet Epiphany, but Kouta Ehara has done a lot of good work to get the archetype back on track. First, you can see a clear focus on the best decks, with plenty of spot removal but a still solid clock bolstered by Reckless Stormseeker. I think there’s just enough aggression here to steal some Game 1s against Izzet Epiphany. Meanwhile, against monocolor aggro, we’ve got solid removal options, and plenty of them.

Where this deck really unlocks though is after sideboarding. I love the inclusion of Go Blank as a way to challenge the card quantity and graveyard setup of Izzet Epiphany, and with them playing fewer copies of Memory Deluge, I expect Go Blank teaming up with Duress to find some success. Against the aggressive matchups we’re dialing up a decent suite of sweepers, and assuming you can get the balance of threats and answers just right, you’ve got access to the type of midrange setup that Izzet Epiphany has all but forced out of the format.

Meanwhile, long-time MTGO grinder Tulio Jaudy is interested in one-mana countermagic, and I can’t blame them at all. A fast clock with just a smidge of disruption has been a predator of go-big control decks for ages, and this deck will play a lot of its Turn 4s and 5s with a beatdown plan in place and a Concerted Defense ready to go. I would not want to be on the Izzet Epiphany side of things against this plan, and it only gets worse after sideboarding once Elite Spellbinder and Malevolent Hermit join the mix. I wonder how much the decks manabase falters if you ever must sideboard out Changelings and don’t have the same kind of consistency with your Temple of the Dragon Queen. Still though, what an awesome way to build a mana base.

I’m less convinced about this deck’s chances against Mono-Green Aggro❄ but I’ll be honest, those sideboard Absorb Identities made me pause. Add in a little bounce your three-drop/counter your four-drop action with Quandrix Command, and you can at least start to see a viable plan taking shape. Mono-Green Aggro’s❄ removal is vulnerable to disruption after all and bouncing something targeted with a Blizzard Brawl can be a huge blowout. I’m not going to pitch this deck as the next big thing, but Tulio obviously thought about the metagame carefully and took the primary threats seriously. I’m going to at least give this one a spin on ladder.

Ultimately, this is a solid Magic format. There’s probably some innovation left to be done, and maybe even a deck that can find a winning matchup against both Mono-Green Aggro❄ and Izzet Epiphany. However, over the long term, Izzet Epiphany is going to institute some very real limitations on the format even when it’s not among the best decks, in just the same way Sultai Ramp (Yorion) did. Going through another Standard with that same kind of specter disincentivizing exploration of a large percentage of the card pool doesn’t seem ideal to me, especially in a moment where Standard really needs to prove it’s worth again.

I hate that I’m the one out here saying the awful “b-word,” but this format has so much potential, and if it takes a ban of Alrund’s Epiphany and/or Esika’s Chariot to unlock, so be it. Here’s hoping.