Of all the cards in Kamigawa: Neon Dynasty, Oni-Cult Anvil wasn’t near the top. Rakdos Sacrifice decks have burned me in the past, and Anvil has too many barriers in place for it to be truly broken. I was mostly looking for a card like Sanguine Brushstroke that could team up with The Meathook Massacre to repeatedly drain our opponents. Anvil wasn’t exactly it.

Well, I was right and I was wrong. Anvil doesn’t live up to Sanguine Brushstroke, but there’s also no reason it has to. 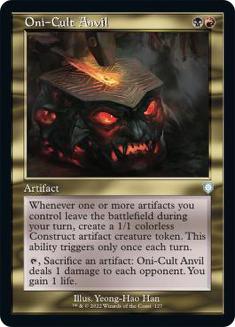 Anvil is also both a sacrifice outlet and a source of damage, which I don’t think we’ve ever had rolled up into the same card. Naturally, it doesn’t excel at either, yet does both jobs admirably. Between Treasures and Blood tokens, we have enough artifact fodder to get it started. At that point, it mostly fuels itself. Plus, there are plenty of useful artifacts in the new set.

After seeing some initial decklists, I was convinced to try it and was glad I did.

This deck is an odd one. Its core is Oni-Cult Anvil and The Meathook Massacre alongside various sacrifice effects. The Voldaren Epicure + Bloodtithe Harvester package is used as a filtering mechanism that comes with some removal attached. Blood tokens also work with Deadly Dispute and Oni-Cult Anvil.

Experimental Synthesizer is a game-changer. It gives you an extra source of card advantage alongside Deadly Dispute thanks to the low mana curve of the deck. With so many ways to sacrifice it, you’ll often be churning through your deck with ease.

I didn’t start building the deck with the intention of keeping the mana curve as low as possible. It just so happens that the best cards for the archetype all cost two mana or less. Since that’s the case, you should almost always be able to get the extra card from Synthesizer as long as you wait until Turn 3 to cast it. Early on, one of the worst cards to hit is another Synthesizer, since you usually won’t be able to cast the extra card from the second copy. That just means you’ll have another copy sitting on the battlefield until you’re ready to cash it in, which isn’t the worst scenario.

In general, Synthesizer is at its best when it’s the last card you cast. That said, there are numerous times when you only have a two-drop to cast on Turn 3, so I’ll often cast Synthesizer on that turn, even if it could potentially end poorly. 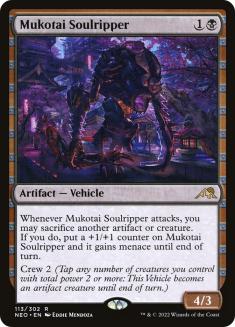 Mukotai Soulripper might seem out of place, but given that you eventually want to get your opponent to zero life, having a quick way to do that makes sense. Normally these decks use their sacrifice fodder for card advantage, but in this instance, you can use them for repeated Shrapnel Blasts.

I started with four copies of Magda, Brazen Outlaw, somewhat due to inertia and somewhat because the other lists I saw floating around also had them. To some degree, we’re an artifact deck, plus there are some Vehicles to crew. Sadly, it didn’t quite work out. Without Jaspera Sentinel or Moonsnare Prototype, it can be difficult to consistently get the Treasure output. 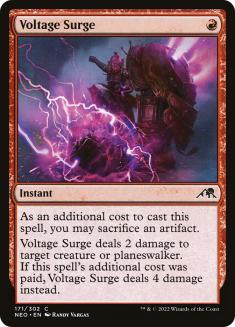 Voltage Surge is incredibly good. Most of the time, you’ll only need a Shock, but killing Goldspan Dragon, Esika’s Chariot, and many others for only one mana is perfect for this deck. You rarely need to kill multiple things, but it’s important to have a removal spell at the ready for your opponent’s important card at some point in the mid-game, and Voltage Surge is perfect for the job. Finding something to sacrifice isn’t difficult and can often be a benefit.

Part of me thinks that I’ll eventually add the fourth copy of The Meathook Massacre into the maindeck. I ended up doing the exact same thing in Alchemy. Creature decks are prevalent, and you always want the first copy, even if you don’t necessarily need it. With the slightly more aggressive slant, three makes sense.

I’ve seen other folks try cards like Dockside Chef and Mechtitan Core. Chef could be interesting in small numbers, since it will ensure you never run out of gas. Its mana inefficiency and small body didn’t excite me when I tried it. If I wanted another source of card advantage, I’d move one of the Reckoner Bankbusters into the maindeck. That said, Chef is another enchantment alongside The Meathook Massacre, which could enable some powerful Soul Transfers if you wanted to go that route. 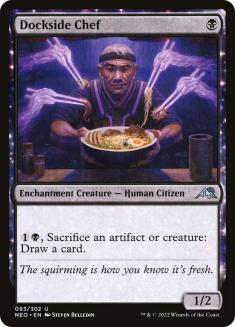 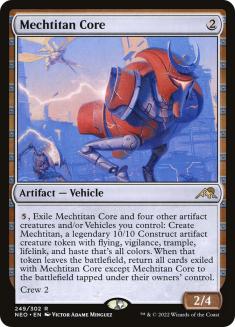 In theory, Mechtitan Core works well with Anvil. The question is whether or not it’s worth it overall. There are some matchups, like the mirror, where it can break stalemates and end the game quickly, but those are few and far between.

I’ve also experimented with more aggressive versions featuring cards like Patchwork Automaton. Even though the jury is still out on those versions, I wouldn’t be surprised if they pop up at some point. There are plenty of options; I just couldn’t find the correct build.

Despite going through the card list several times, it was difficult to find a sideboard configuration I was happy with. Overall, I like where I ended up. You need extra tools to deal with aggro decks, so spot removal, artifact removal for Vehicles, and lifegain are solid inclusions.

Midrange and control require some extra tools as well, although those are trickier. You used to be able to add four Duress and some card advantage and call it a day, but it’s not as easy anymore. The control decks are often beating you with creatures, whether it’s Lier, Disciple of the Drowned; Hullbreaker Horror; Goldspan Dragon; or Hinata, Dawn-Crowned powering out cheap copies of Magma Opus. Rather than rely on Duress and Go Blank, I opted for Skyclave Shade and Reckoner Bankbuster.

Cinderclasm is probably the best card against Patchwork Automaton decks if it comes to it. Despite not seeing much play, Yasharn, Implacable Earth needs to die on sight, which is why we have the Infernal Grasp and March of Wretched Sorrow.

Depending on their win conditions, I’d also consider bringing in the Infernal Grasp. They usually won’t have the tools to grind you into dust, so they have to rely on whatever their win condition is to eventually go over the top of you.

These matchups used to be more difficult, but with our added aggression and card advantage, they’re less scary. Just win before their big stuff takes over.

The mirror is kind of nonsense. Usually, it will come down to who has the most Anvils, so our first order of business is to break those. After that, it’s a matter of not dying to assorted beatdowns from Soulrippers.

Eyetwitch could potentially help. At this point, Start from Scratch is one of the better lessons, plus Mascot Exhibition can be difficult to deal with. If the mirror does pick up in popularity, maybe we’ll have to take more drastic measures to deal with it, but we aren’t there yet.

Henrika Domnathi isn’t an impressive Magic card by today’s standards. However, the aggro decks with large bodies aren’t particularly good at dealing with big threats that also help you stabilize, and Henrika seems like the best for the job. That said, it’s entirely possible that you don’t need the big card at all.

If you trim some of the clunky card advantage stuff and load up on removal, these matchups tend to be relatively easy. As long as you keep up with them, they’ll eventually run out of gas.

Esper is mostly a Magic Online (MTGO) thing, although it’s only a matter of time until it completely breaks out. Despite them having a massive amount of card advantage, Rakdos can win the war of attrition. It involves chaining together your Synthesizers and Disputes and eventually burning them out with Anvils and Meathooks.

Duress is merely fine here. It will likely hit something, but most of their cards are replaceable. I like playing to the battlefield instead. The Vampires are some of the weakest cards in the matchup. Bloodtithe Harvester doesn’t kill anything relevant and will often trade with a random token. Still, it’s a three-power creature and can crew Vehicles, so some copies have to stay.

There are plenty of other matchups out there, but this sideboarding guide should be able to tell you how to configure your deck in the rest of the matchups because the plans are so similar.

It’s unlikely that Rakdos Sacrifice is the best deck in Standard because of the low amount of raw power. However, Kamigawa: Neon Dynasty offers many new tools to close the gap and the synergies are very strong. Even if it’s not the best deck, it’s in the top tier. It’s also very fun to play and very good at executing its gameplan.