It’s Prerelease Weekend for Modern Horizons 2, so if you get an opportunity to play, I hope you open some sweet cards for your Commander decks.  There are a lot of goodies for Commander fans, including quite a few legends you can built your deck around.  I’ve written about two so far (Piru, the Volatile and Aeve, Progenitor), so if you haven’t read about those yet be sure to check ‘em out!  This week I’m covering one of the coolest of the bunch, Lonis, Cryptozoologist! 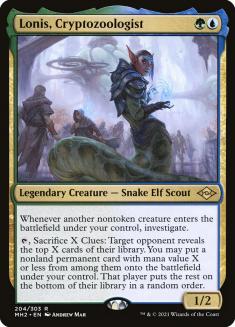 I would have written about Lonis last week, but I wanted to make sure I had the entire Modern Horizons 2 card list revealed because there are other cards that make Clue tokens or otherwise care about that sort of thing and I didn’t want to miss out calling out those here.

By the way, what a great title we have for Lonis! Cryptozoologist is an actual real-world word, one who studies cryptozoology, which is a pseudoscience that aims to prove the existence of folklore creatures such as Bigfoot, the Loch Ness Monster, and the Chupacabra (ravenous, perhaps?).  Looking for clues about mythical monsters and beasts sounds like a fantastic Simic spin on the investigate mechanic, right?

I have to say, I really love the design here.  Wizards has had a tough time with Simic legendary creatures of late, falling on the “oops, too powerful” side of the line so often that it’s become a bit of a punchline.

Lonis toes that line, coming down for just two mana and triggering just for playing regular Magic, in this case playing a fair number of creatures. But instead of just automatically drawing a card, you get a Clue token that you must invest two mana to sacrifice and draw that card.  That’s not an insignificant cost against mana you could be using to play something to the battlefield.

“But Bennie,” you may be saying, “what about Lonis’s activated ability?”  What about it indeed?  I actually think the ability is pretty tame given its random nature, and unless you’ve got a lot of Clue tokens to sacrifice, the chances of missing are significant. Let’s say you’re sacrificing eight Clue tokens to dig eight cards deep into an opponent’s library in the hopes of hitting a nonland permanent that’s worth losing out on potentially eight fresh cards from the top of your deck.  To my mind, Lonis’s activated ability is just a failsafe in case an opponent is sweeping the battlefield of all artifacts and you don’t have any more mana to sacrifice the Clues—sacrifice them and maybe you’ll hit something worthwhile.

One important thing to remember about Clues as opposed to other artifacts you can cash in for an effect, like Treasures: Clues don’t need to be tapped to be sacrificed, so you can take full advantage of effects that tap artifacts and still be able to sacrifice it to draw a card.

All right, let’s unravel some mysteries!

Obviously the first things you want to hunt down are other cards that make or care about Clues, and there are a surprising number of them available, including some juicy new cards from Modern Horizons 2!  Academy Manufactor is a powerhouse here, giving you a Treasure and a Food token each time you generate a Clue.  Also props to the sly Blue’s Clues reference built into Floodhound.  The classics Tireless Tracker, Ulvenwald Mysteries, and Ongoing Investigation are just solid Magic cards on their own, but really get turbo-charged in a Clue-centric deck.

Next up we’re going to look for cards that care about tokens, and there are quite a few available to us including the original powerhouse Doubling Season, and new all-stars Adrix and Nev, Twincasters and Esix, Fractal Bloom.  Junk Winder is a new uncommon from Modern Horizons 2 that is simply bonkers in any token-heavy strategy like the one Lonis would slot into.  Even outside of a dedicated Clue strategy, Lonis can do good work in a creature-heavy deck that cares about tokens in general and I’d happily slot it into the 99 of a deck alongside cards like Anointed Procession or Brudiclad, Telchor Engineer.

If you play a lot of creatures with Lonis on the battlefield, alongside other artifact token generators, you’re going to end up with a lot of artifacts on the battlefield, so artifact synergies and shenanigans might find room in your deck. In particular, Urza, Lord High Artificer is going to be even more nuts than usual since you’ll be able to tap Clue tokens for mana to either cast spells or even sacrifice Clues to draw cards. Master of Etherium and Darksteel Juggernaut both obviously enjoy having lots of random artifacts around. If you have an artifact synergy deck with a fair number of creatures and cards like Reckless Fireweaver or Marionette Master, you might consider finding room for Lonis.

If you’re playing a Bant Golem tribal deck with Ich-Tekik, Salvage Splicer, you might consider adding Lonis to the deck since all those Clue tokens can grow Ich-Tekik and your Golems each time you sacrifice them.

An end-game of Rise and Shine with overload and a bunch of Clues to attack someone, or Mechanized Production cast at instant speed with a win on your upkeep, sounds pretty fun.

Another approach to maximizing Lonis is to play creatures with nice enters-the-battlefield abilities and then bounce them back to your hand and cast them again to get more Clue tokens. Blue has a ton of these sort of effects available, but you can even find a few of them in green, such as Temur Sabertooth, Roaring Primadox and even Kogla, the Titan Ape if you have some Human creatures lying around.  I’ve only seen Cunning Evasion used in Ninja decks, but I think it could be quite good in a deck alongside Lonis.

Shrieking Drake is an interesting option here. Casting it and bouncing it back to your hand lets you just create a Clue for each blue mana you have available.

Another powerful option for your Lonis strategies is blinking creatures, which circumvents needing to replay the creature to get the Clue token. Blue of course has a lot of great options for this approach like Deadeye Navigator and Thassa, Deep-Dwelling. Identity Thief’s attack trigger is a neat option here if the creature you exile is one of your creatures since it will come back at the beginning of the next end step.

In addition to blinking creatures to get Clues, you can also take advantage of creatures with the ability to return to the battlefield when they die, such a creatures with persist.  If you have green and blue in your deck and are running cards like River Kelpie, Glen Elendra Archmage, or Cauldron of Souls you might want to consider Lonis. Phytotitan is another interesting option that just keeps coming back to the battlefield whenever it dies, netting you another Clue token.

On the flip side of persist is undying, which also brings creatures back from the graveyard.  If your deck is doing things with +1/+1 counters and has green and blue, you might consider some of these persist creatures alongside Lonis for value.  Vorapede’s sizable body and its vigilance and trample ability make it quite a nice Commander card.

I mentioned above that Cunning Evasion could be quite good outside of Ninja decks with Lonis, but why not have the best of both worlds and run Ninjas too?  The ninjutsu ability is basically a bounce spell that nets you a Clue from Lonis when the Ninja enters the battlefield, while returning a creature to your hand that will net you a Clue when you cast it.  Even if you don’t go all-in on Ninjas, Sakashima’s Student and Ninja of the Deep Hours are solid cards that synergize nicely with Lonis.

Green has some of the best color-fixing and mana ramp spells in the game with cards like Rampant Growth and Cultivate, but if you’re playing Lonis you should consider leaning more heavily on creature options that do that job such as Wood Elves and Solemn Simulacrum. Wall of Roots is another solid choice, especially since you can use its mana ability again during an opponent’s turn that you can use to cash in a Clue to draw a card.

It’s also a good idea to make use of lots of utility creatures instead of spells when playing with Lonis. These cards are already good in Commander but they’re even better when they come with a Clue token attached.  I particularly like God-Eternal Rhonas here since the Clue token it can generate with Lonis will help you draw it again sooner if it dies or is exiled.

What do you think?  Are there any other cards you think would play great alongside Lonis, Cryptozoologist?  And if there are any new legends from Modern Horizons 2 that you’d like me to do another deep dive on, please let me know!