Innistrad: Crimson Vow has been fully previewed, and there are a ton of amazing goodies for Commander fans!  If you haven’t already, check out Sheldon Menery’s set review for Commander to see what goodies you might want to be on the lookout for to spice up your decks.

Last week I resisted the siren call of Vampire blood and did a deep dive on Grolnok, the Omnivore.  This week though I’ve finally accepted my fate invitation to the undead wedding party.  But which new Vampire legend should I build around?  I have to say, the one that interests me the most is Henrika Domnathi! 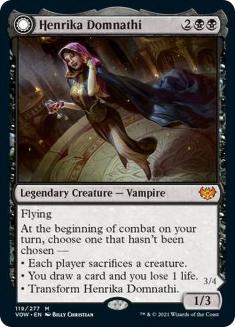 For four mana you get a 1/3 flying Vampire that says:

I really like that the triggered ability “has haste” provided you cast it prior to your combat step. I can see the first mode being handy if one of your opponents has a single gigantic Voltron threat. More often, my first choice will be to draw a card and lose a life. Replacing itself is quite nice and well worth waiting a turn for Henrika to transform to her more impressive side. 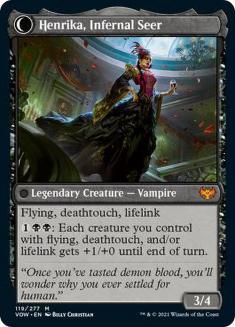 Basically, you get a Vampire Nighthawk with an added point of power and toughness, and a nice mana sink that boosts Henrika and any other creatures you may have that have flying, deathtouch, or lifelink.  Since a lot of great Vampire cards also have those abilities, Henrika can make a solid choice for a mono-black Vampire tribal deck. But you can choose instead to diversify your creature base and just pick solid creatures with those abilities, where Henrika’s activated ability can just tie them together for a well-timed combat boost.

Vampires with Flying, Deathtouch, or Lifelink

The first thing to do is check out all the good Vampires that have flying, deathtouch, or lifelink, and there are plenty to make a solid Vampire tribal base. A new card from Crimson Vow Commander, Crossway Troublemakers, can even give deathtouch and lifelink to all your attacking Vampires who don’t already have it, while providing redraws for any of your Vampires that die. Vito, Thorn of the Dusk Rose is another amazing card in a deck with lifegain and especially when you can activate its ability to give all your creatures lifelink.

I particularly like Drana, Liberator of Malakir here because she can add +1/+1 counters to Henrika, which remain on her no matter which side of the card she’s on.

If we go Vampire tribal there are some sweet support cards with which we can round out our deck. I particularly love Heirloom Blade and Stoneforge Masterwork for the potential of significantly boosting the power of our lifelinking creatures – like Henrika!

If we want to step outside of Vampire tribal, we can still play a few good flying Vampires and supplement with some other great creatures with flying.  Bitterblossom, Hangarback Walker, and Thopter Assembly can all produce a lot of small flyers that can get boosted with Henrika for a go-wide assault. There’s a surprising number of decent Dragons available in mono-black, such as Kokusho, the Evening Star and Boneyard Scourge, and they all have flying and can benefit from Henrika’s boost.

Black has a bunch of great ways to trade life for resources, so leaning hard on having creatures with lifelink is always helpful. I particularly love Mask of Griselbrand since if the creature it’s equipped to dies you can potentially draw a fair number of cards. It’s a little expensive to equip but a mono-black deck has many ways to generate a bunch of mana, especially in the mid- to late-game.

Black has access to deathtouch too, so let’s take a look at some of our better options. Witch of the Moors is a house in this deck given this line: cast Henrika, draw a card and lose a life; next turn, transform Henrika and attack, gain life, and then cast Witch of the Moors, gaining its end-step trigger.

Gift of Doom is a card I’ve been looking for find a home for. It’s possible that Henrika might be a good place for it; giving something indestructible seems decent.

Deathtouch is the chocolate of creature abilities because it combines so nicely with other flavors (abilities). One of them is first strike; when a creature with both is in combat with a creature that doesn’t have first strike, the attacker can kill the blocker before it deals its own damage. I particularly like Fireshrieker and Runechanter’s Pike since they can leverage Henrika’s lifelink ability for more lifegain.

The other ability that combines great with deathtouch is trample; since one point of deathtouch is lethal damage, you can assign the rest of the damage to the next blocker or the defending player’s life total. My old favorite Power Matrix provides first strike, and trample, and flying too if that makes a difference, in addition to the +1/+1, so it’s a slam-dunk inclusion with Henrika.

Shadowspear is an amazing card that I advocate for just about any Commander deck if you have a copy available, but it’s going to be especially good here, since taking away indestructible is going to be crucial to leveraging your deathtouch abilities.

Before we leave talking about deathtouch behind, I’d note that equipping Henrika with something like Viridian Longbow turns your commander into one heck of a creature assassin, gaining you life along the way.

I might also consider some ways to “blink” Henrika. There may be situations where you just want to draw a card or force a sacrifice on each of your turns. Just keep in mind that her ability isn’t an enters-the-battlefield trigger; you’ll have to wait until the beginning of your combat step to take advantage of it. Sword of Hearth and Home is a good choice for this, since it has other applications and fetching up a Swamp is something a mono-black deck always appreciates. Feign Death and Undying Evil are interesting ways to reset Henrika if she dies; when she comes back from the graveyard, she’ll have a +1/+1 counter that will stick around when she transforms.

To leverage the lifelink ability we utilize ways to increase the creature’s power, and the first ones I’d reach for in a mono-black deck are Lashwrithe and Nightmare Lash, as they’ll provide a bigger and bigger boost for each Swamp you control. With enough artifacts Cranial Plating is in the conversation. Blade of the Bloodchief double-dips on the +1/+1 counters if equipped to a Vampire.  Unspeakable Symbol is a high-risk, high-reward card to consider if you’ve got a lot of lifelink creatures that can restore the life loss as they get bigger and bigger. Hatred is another risky card that can potentially one-shot someone with commander damage if you can get in with Henrika and immediately get back the life you paid.

While the activated ability of Henrika, Infernal Seer is a fantastic mana sink, it is a bit expensive. Thankfully black has a ton of ways to generate a ton of mana, beginning with the classic combo of Cabal Coffers and Urborg, Tomb of Yawgmoth.  Nirkana Revenant is a Vampire and could benefit from any tribal synergies you have in your deck, but I’d consider playing it even outside of tribal for the mana boost.  Luckily for us it was recently reprinted in one of the Crimson Vow Commander decks, so it should be much easier to acquire if you don’t already have one. Crypt Ghast is another good one with this effect, and the extort ability can contribute to your lifegain synergies.

K’rrik, Son of Yawgmoth lets you pay Phyrexian mana instead of black mana for activated abilities with black mana in the cost, so you can activate Henrika’s ability each time for four life and one generic mana, which you could immediately recoup if you’ve got a lot of attacking creatures that have gained lifelink with something like Vito, Thorn of the Dusk Rose or Whip of Erebos.

So, what do you think of Henrika Domnathi? Is there anything you would play with it that I didn’t mention above?