I hope everyone had a chance to acquire some Adventures in the Forgotten Realms packs this past Prerelease weekend and get to open some of the cards that you’re looking for. Playing with new cards on Magic Arena or Magic Online is certainly fun, but for me nothing stirs my imagination as much as having the paper card in my hand. All the preorders I’ve placed for singles should be shipping this weekend, and next week I’ll start slotting them into some of my Commander decks.  One card I’m really looking forward to trying out is a legendary version of a classic scary creature from Dungeons & Dragons: the illithids, the so-called mind flayers, personified by Grazilaxx, Illithid Scholar! 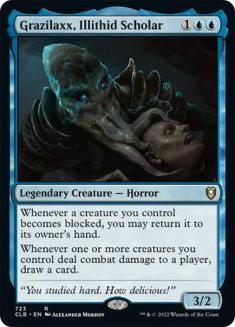 As described in the Advanced Dungeons & Dragons Monster Manual back in 1977, these creatures are alien terrors that blast you with psionic power to render you helpless, and then use their face tentacles to extract your brain and consume it.  Creature type Horror is quite accurate!

From reading about them and fighting against them in many adventures over the years, I would have expected a mind flayer creature card to have black in its color identity.  In the article about the legends from Adventures in the Forgotten Realms, Wizards of the Coast (WotC) describes this particular Mind Flayer thusly:

Grazilaxx is a mind flayer member of the Society of Brilliance, a sect of highly intelligent monsters that have banded together to solve all of the Underdark’s problems. The society is investigating what it fears is some kind of “demonic incursion.”

Like other members of the society, Grazilaxx is erudite and talkative (though he prefers to “speak” via telepathy), opting for diplomacy and debate over violence.

Apparently at some point during the crisis of the demonic incursion, Grazilaxx actually helps Drizzt Do’Urden and his companions fight the demon lord Demogorgon, so perhaps it’s fitting that Grazilaxx is mono-blue rather than mono-black or Dimir in color. But enough about the D&D, let’s dig into the Magic of this card!

If Grazilaxx’s first ability seems familiar, it’s because we’ve seen it before on an enchantment called Cunning Evasion. 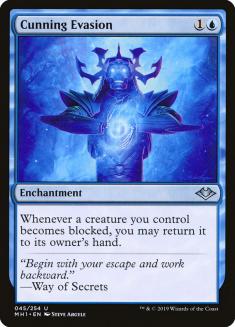 This card works great with Ninjas, which are typically small and squishy in combat and don’t like to stick around for combat damage assignment. Returning to their owner’s hand is the perfect place to hide until they can swap places with an unblocked creature with their ninjutsu ability.

Grazilaxx’s second ability is worded in a very particular way. At first glance, it kind of reads like Coastal Piracy. 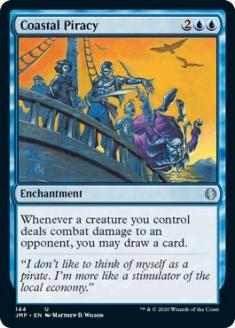 However, the wording is lifted straight from cards like Keeper of Fables. 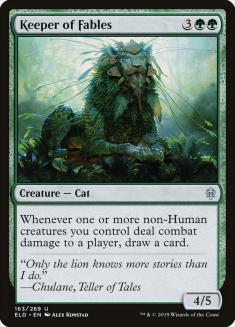 With Coastal Piracy, if you hit a player with combat damage from three creatures, you draw three cards. But with Keeper of Fables – and Grazilaxx – if you hit a player with combat damage from one creature, three creatures, or ten creatures, you’ll just draw one card. Which sounds disappointing, until you realize that you do have more than one opponent, and Grazilaxx’s trigger can work on each player that took combat damage during your attack step. Which tells me that having a few small, evasive creatures so you can attack each of your opponents each combat is the way to maximize the card-draw potential of Grazilaxx.

But that’s not all—let’s back up to the Cunning Evasion ability. If you’ve got a creature that has an ability that triggers when it enters the battlefield, will your opponent want to block it and let you get the trigger again or take the damage and let you draw a card?  So, another angle would be to have a good number of those sorts of creatures too.

Okay, let’s dive into the horrors of this legendary mind flayer!

I was surprised to find there are 32 Horror creatures available in blue if you want to go Horror tribal with Grazilaxx as the commander. They don’t necessarily pull together in a coherent theme. Thrummingbird wants to proliferate; Eternal Scourge can be cast from exile; Thing in the Ice wants you to build a spellslinger deck. There’s milling with Geralf’s Mindcrusher, and Horrors that come back from the graveyard by discarding cards like Geralf’s Masterpiece and Stitchwing Skaab. Going tribal brings some decent support cards to the table including Kindred Discovery, arguably one of the most powerful tribal cards ever printed. If you’re up for a deckbuilding challenge, mono-blue Horror tribal should scratch that itch!

The Commander card pool is stuffed to the gills with creatures that have fantastic enters-the-battlefield triggers, and even if we’re playing a mono-blue deck with Grazilaxx as the commander we’ve got lots of choices that will put your opponents between a rock and a hard place. Block my Solemn Simulacrum?  Why sure, I’ll return it to my hand and cast it again to ramp some more!  Do they dare block Duplicant and have you return it to your hand and cast it again? What about Scourge of Fleets?

Another group of those sorts of creatures are ones that make you the monarch when they enter the battlefield. If someone takes the monarch from you, attack them with Staunch Throneguard. If they don’t block, you draw a card and become the monarch, so of course they’ll have to block it, and you can return it to your hand and cast it again to still become the monarch.

I really like how Canal Courier encourages you to attack different players, which is what Grazilaxx wants us to do!

Speaking of attacking different players at once, that brings to mind the myriad and melee mechanics. If you can equip Blade of Selves to an evasive creature, you can attack all of your opponents and hopefully draw a card for each player you attacked. The melee mechanic hasn’t shown up in blue, but if you’re building a Temur or Jeskai deck with a fair number of melee creatures, consider adding Grazilaxx to the 99.

Regarding small evasive creatures, there are plenty of them available in blue. From Slither Blade to Invisible Stalker on up to Deepchannel Mentor making all your blue creatures unblockable, they can provide a steady source of cards from Grazilaxx’s triggers. A good creature equipped with Infiltration Lens really puts forth a tough choice for your opponent: no blocks, take damage and let you draw a card, or block and let you draw two cards with Infiltration Lens.

If we build our deck right, we should be drawing a fair number of extra cards each turn, which tells me we should look to leveraging those extra cards with other cards that synergize with that. Psychosis Crawler steals a life from each of your opponents each time you draw a card, not to mention getting bigger itself. If you want to lean into a mill strategy, cards like Jace’s Erasure and Teferi’s Tutelage can get those cards hitting the graveyard while you draw.

Body of Knowledge is going to be a huge threat in a deck like this; your opponents won’t want to take damage from it, but if they put blockers in front of it, you’ll be drawing potentially even more cards; keep in mind you don’t have to return blocked creatures to your hand with Grazilaxx if you’re okay with how the creature combat is working out.

While creatures with awesome enters-the-battlefield triggers are a dime a dozen in Magic, there are also creatures with leaves-the-battlefield triggers that are worth considering for a deck alongside Grazilaxx. Toothy, Imaginary Friend is perfect for this deck since it will presumably grow quite large with the extra card draw, and if your opponent blocks it and you want to return it to your hand you can draw a card for each +1/+1 counter that was accumulated on it. Having a few Ninjas in your deck like Mistblade Shinobi and Ninja of the Deep Hours can really keep your opponents on their toes. If you branch out into other colors, putting Grazilaxx in a deck alongside Varchild, Betrayer of Kjeldor or Vela the Night-Clad can really juice things up. You might even consider making Grazilaxx an honorary Ninja friend in a Yuriko, the Tiger’s Shadow deck.

While drawing extra cards each turn means that we’ll likely be hitting our land drops every single turn, if you keep having to cast blocked creatures over and over again, that mana cost can really start to add up, so we’ll want to include ways to discount our creature spells along the way. Kefnet’s Monument in particular is awesome here since it can tap down blockers and make it easier to send in attackers. And if you’re not playing any planeswalkers, The Immortal Sun does lots of good work in addition to saving you mana on spells.

So, what do you think of Grazilaxx, Illithid Scholar as a Magic card?  Does it evoke any fond D&D memories?  What other sorts of cards do you think would play great in its Commander deck?