After doing deep dives into some legends from Innistrad: Midnight Hunt, this week I wanted to shift gears and dig into one of the coolest new legends from the Commander preconstructed decks, specifically Undead Unleashed. The card stands out a bit because it’s not undead and doesn’t really care about undead… except for undead token creatures.  I’m talking about Eloise, Nephalia Sleuth! 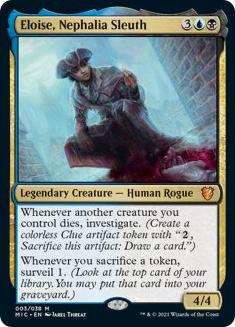 Remarkably, when I first started digging into this legend, there were zero decks in any of the deck databases EDHREC scrapes.  Zero!  At the time of this writing some people have begun to catch on to how much fun it is to brew around, pushing it to fifth from last place.  I’m here to tell you, this commander is super-cool, especially since it’s quite different from most Dimir legends. It cares about creatures dying and tokens being sacrificed, and gives you Clues along the way.  Even cooler is if you sacrifice token creatures, which will let you both investigate and surveil. With enough ways to reliably kill off your own creatures, all the Clue tokens mean we might even want to look for artifact synergies too!

Creature tokens satisfy both of Eloise’s abilities, so let’s look for ways to make ’em.  Bastion of Remembrance makes a token but then sticks around and slowly drains your opponents of life while boosting yours as your creatures die. Blight Mound, Pawn of Ulamog, Ogre Slumlord, and Sifter of Skulls create creature tokens whenever your nontoken creatures die, and the two Eldrazi make Eldrazi token creatures you can sacrifice for mana, which you can then use to help pay to sacrifice the Clue tokens.

Whirler Rogue is incredible here—not only does it make two 1/1 Thopter artifact tokens, it can even make use of Clue tokens by tapping them to make a creature unblockable until the end of turn. Remember: Clue tokens need to tap in order to sacrifice. You can tap them as a resource and still cash them in for cards.

What’s nice with Eloise is that, when you sacrifice a Clue token, you get to surveil first to provide you a little library manipulation before drawing your card.

Wizards of the Coast (WotC) has given us a lot of ways to make various noncreature tokens of late. We can use a bunch of them here to get surveil triggers from Eloise in addition to the benefits inherent in the tokens. We can dig deep into Treasure tokens with cards like Pitiless Plunderer, Grim Hireling, and Spell Swindle to potentially get an alternative win with Revel in Riches.

And of course, we’d want Academy Manufactor to trigger off Eloise’s Clue token generation or all those other Treasure token generators, getting three tokens for the price of one!

Another way to get creature tokens is to take advantage of blue’s ability to make tokens that are copies of other creatures. The big daddy of them all is Rite of Replication cast with kicker, making a whopping five token copies of an opponent’s best creature, and if your opponents sweep the battlefield, you’ll get to investigate five times. Helm of the Host equipped to Eloise gives you nonlegendary token copies of Eloise for even more delicious triggers. And don’t leave home without Mirrorpool, a card so cool it has its own dance (ask me about it sometime).

Okay, so we’ve got creatures including token creatures. Now we just need them to end up dying so we can get Eloise triggers. You can cash in creatures that might already be dying with Plumb the Forbidden or Deadly Dispute to draw some extra cards. Westvale Abbey can both create creature tokens and sacrifice five creatures to transform into Ormendahl, Profane Prince – a truly hellacious Demon with flying, lifelink, indestructible, and haste!

Fain, the Broker seems right at home alongside Eloise. He can sacrifice a creature, create a Treasure token, sacrifice an artifact such as a Clue, and untap to do it all over again.  It might even be worth adding Training Grounds to the deck with enough activated abilities!  Kels, Fight Fixer loves for you to sacrifice creatures, letting you draw cards and can even be a sacrifice outlet for just one mana.

Tevesh Szat lets you sacrifice a creature or planeswalker to draw two cards. Its +2 ability can even make two 0/1 Thrull token creatures for sacrificial fodder.

Spawning Pit is a nice artifact that doesn’t cost any mana to sacrifice and can create 2/2 artifact creature tokens for every two creatures you sacrifice, so it checks a lot of boxes on our synergy mood board.

Eloise will ensure that we have a fair stream of tokens, but with plenty of other ways to make tokens, we should start looking at cards that care about tokens. I’ve yet to find a comfortable home for Idol of Oblivion but I think Eloise might be perfect for it, letting you at the very least draw a card each time one of your creatures die and Eloise creates a Clue. Nadier, Agent of Duskenel is a little expensive, but it gets a +1/+1 counter whenever a token you control leaves the battlefield, and when Nadier leaves the battlefield, you get a number of 1/1 Elf Warrior creature tokens equal to its power.  Yay, more token creatures!

Erdwal Illuminator hadn’t seen much Commander play until Lonis, Cryptozoologist came out earlier this year, but we definitely want this cute little Spirit alongside Eloise to double up on her investigate trigger.

Deekah, Fractal Theorist can create creature tokens with its magecraft trigger, and if you happen to have a creature token you want to get into combat unblocked, her activated ability can make that happen.  Then there’s Curiosity Crafter, a 3/3 flyer with two relevant abilities in the text box: no maximum hand size for all those extra cards you may draw from cracking Clue tokens, and letting you draw a card each time a creature token you control deals combat damage to a player. The card draw spice must flow!

With Clue tokens and other artifact tokens, we might want to tap into artifact synergies. If you happen to have a copy of Urza, Lord High Artificer that needs a home, he pairs up quite nicely with Eloise, letting you tap each Clue token for a blue mana and making a Construct token that can grow into enormous size. Cranial Plating is another card that scales up to terrifying power as you create more and more Clue tokens, and why not equip it to Marionette Master when you want to start sacrificing Clue tokens to dish out some big life drain triggers?

A Clue-rich environment is the perfect place to raise a Serpent like Junk Winder, with its affinity for tokens ability making it cheaper to cast, and whenever you make a token, you get to freeze down an opponent’s nonland permanent. This also seems like a fantastic deck to run Contraband Kingpin—between drawing cards with Clues, surveilling with Eloise, and scrying with the Kingpin, we’ll potentially see a lot of cards on the top of our deck!

Let’s also not forget about a classic—Trading Post!  It makes token creatures, it sacrifices creatures, and sacrifices artifacts, all of which are relevant to our gameplan. And in a pinch, you can gain 4 life.

With all the surveilling that Eloise brings to the table, I thought I’d look for ways to take advantage of seeing what the card is on the top of my library. Druidic Satchel is a nice way to ramp a land off the top of your deck, or make a 1/1 token creature, or gain life if needed. You can use Scroll Rack to immediately get a card you may need once you see it on the top of your deck or put a card from your hand that you don’t need on top of your deck and mill it away with surveil.

You can clear away artifact spells from the top of your deck with Mystic Forge and surveil away things you don’t need. Surveil works exceptionally nice in transforming Search for Azcanta early, and it can also improve the chances of hitting a noncreature, nonland card when activating Azcanta, the Sunken Ruin.

With a surveil ability tacked onto our commander, it makes sense to run both Enhanced Surveillance and Blood Operative, which get quite good when you regularly surveil.

The surveil abilities of our commander mean we may want to include a touch of reanimation in our deck. Include a couple of large, expensive-to-cast creatures, and Dimir has a plethora of excellent reanimation spells available to it. I’ve listed some of the best above. I really like Blood for Bones since it’s a sacrifice outlet too.

Lastly, let’s not overlook that Eloise is a Rogue, so if you want you can dig into some Rogue synergies too. If you do, Bitterblossom is a great enchantment that makes Faerie Rogue token creatures for sacrificial fodder. Even if you’re not dipping deep into Rogue tribal, your commander can still make use of Cloak and Dagger to protect Eloise form targeted interaction, and Notorious Throng can make token creatures for you and potentially let you take an extra turn if you can pay the prowl cost.

So, what do you think of Eloise, Nephalia Sleuth as a Magic card?  Are you going to play it as a commander or in the 99 of some other Commander deck?  What other cards work great with it?