One of the coolest new cards from Adventures in the Forgotten Realms is Delina, Wild Mage.  On stats alone Delina isn’t much to write home about as a 3/2 Elf Shaman for four mana. But when Delina attacks, you get to choose a target creature you control and then roll a d20.  On a 1-14, you create a tapped and attacking token that’s a copy of that creature, except it’s not legendary and has “Exile this creature at end of combat.”  On a 15-20, you create one of those tokens and then roll again. 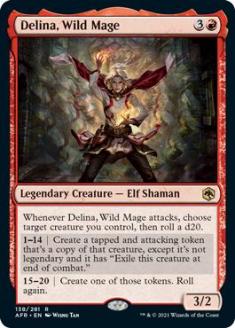 If you’ve been following some of the new developments in Standard since all the new cards have been previewed you’ve probably seen the dice-rolling combo potential of Delina, Wild Mage with Pixie Guide. Below is a short video from MTG Goldfish that illustrates how it happens:

It’s interesting to note that, once the combo goes on long enough and the odds of not hitting a 15-20 diminish to nothing, you can’t actually stop the combo as Delina is printed.  Thankfully, WotC has issued errata so that the last line reads “you may roll again.” WotC rules maestro Matt Tabak explains:

Outside of swarming your opponents with infinite pixies, Delina’s ability to make a token copy any creature you control is quite good in a lot of Commander decks. There are a bunch of creatures with awesome enters the battlefield effects that you’d like to trigger again, and you might even have some legends standing about that you’d like to double up on temporarily. This sort of flexibility makes Delina both a cool card to lead a mono-red Commander deck, or an awesome card to put into the 99 of another Commander deck with red in the color identity.

Make Sure You Use a Random d20!

Before we go any further, I’d like to point out that two different kind of 20-sided dice (d20s) out there: ones that are made for randomized rolling and ones that are made for keeping track of life totals called “spin-down” d20s.  Adventures in the Forgotten Realms is the first time that Magic has been concerned with actual random rolling of d20s, so if you’re playing Delina or other new dice-rolling cards make sure you’re using one that’s properly randomized.

“But Bennie,” you may be saying, “does it really matter if I roll a spindown instead?” It actually does, for two reasons.  One, nearly all dice are mass manufactured with a high likelihood of having small internal flaws that can make it slightly imbalanced.  And two, a spindown is basically a coin-flip die, with one side of the sphere having the high numbers and the other side having the low numbers. If the imbalance biases the spindown so that it favors the low number side being face down, you’ll get a lot more high numbers when you roll the spindown.  How lucky! But with a properly randomized d20, even given imperfections and biases favoring one side of the sphere showing up, there’s an even chance of it having high or low numbers.  This graphic illustrates the principal quite well:

Thankfully, WotC is including an actual randomized d20 in the prerelease packs for Adventures in the Forgotten Realms, but if you don’t get one of those it’s super-easy to pick up dice at your local game or hobby store.  Odds are good they have a selection of d20s you can grab for a dollar or two a piece.

Okay, have you got your randomized d20 ready?  Let’s dig in!

Adventures in the Forgotten Realms has a bunch of great new cards that care about dice rolling in addition to the aforementioned Pixie Guide and its Grant an Advantage ability. Barbarian Class is a great card to pair up with Delina, adding another die roll to help improve the result on dice rolling for just a one mana initial investment. If you want to go up to Level 2, you can boost a creature with +2/+0 and menace which can help ensure that Delina can attack without being blocked.  Even Level 3 is helpful, giving your creatures haste so that Delina can attack the same turn she’s played.

If you want to dip into silver-bordered cards there are all sorts of other effects that care about dice rolling. Krark’s Other Thumb offers up yet another way to add an extra die to any die roll, while Goblin Bookie can do it once per activation. Several of these silver border cards are balanced for rolling a d6, so they can get really bonkers when you’re rolling a d20; just take a look at Steel Squirrel!

If we’re going to lean into synergizing with Delina’s dice rolling, we’ll want to consider other dice rolling cards in case Delina isn’t available. Chaos Channeler and Hoarding Ogre are perfect complements since they also roll dice based off an attack trigger. I also really love Bag of Tricks as a way to get a die roll each turn without it being tied into the attack step.

Creatures with Enters the Battlefield Triggers

Outside of just getting extra attackers, we can really leverage Delina’s ability by targeting creatures with powerful enters the battlefield triggers.  Cards like Solemn Simulacrum, Dockside Extortionist, and Duplicant are great cards that could go into a mono-red Delina deck, but we can look at potent creatures in other cards where Delina can do work in the 99.  I really like Delina in a Kardur, Doomscourge Commander deck!

I also like Delina alongside cards that have combat damage triggers. The release notes for Delina specify that you declare which player or planeswalker the copy token is attacking as you put it onto the battlefield; it doesn’t have to be the same player or planeswalker Delina is attacking. So, you can make a copy of Hellkite Tyrant and have the Dragons attack two different players that have a lot of artifacts you want to steal.

The not-legendary clause comes in quite handy when copying something like Dragonlord Ojutai so you can get its incredible trigger twice or leave the actual card untapped and hexproof and still take advantage of its copy attacking.

The tokens that Delina creates get exiled at the end of combat, which means if they don’t die in combat, they won’t trigger any abilities from dying. There are a few creatures that care about leaving the battlefield which would apply. In particular I really like copying Varchild, Betrayer of Kjeldor since the copy from Delina will leave the battlefield and you’ll get any Survivors on the battlefield.

Even though Delina’s copy token is attacking, it’s never declared as an attacking creature so any ability that trigger whenever a creature attacks won’t trigger off the token (though it will trigger from the Delina card), so most of those types of cards aren’t really getting any extra benefit alongside Delina.  However, instant speed cards or abilities can be used after the token is on the battlefield attacking, so you could cast something like Mercadia’s Downfall to boost all of your attackers hopefully lethal levels of damage against your opponents with greedy manabases.

Delina makes token creatures so it’s worth considering playing her alongside any token synergies. Ghired, Akim and Telchor have red in their color identity and like to do stuff with tokens. If you have a Temur deck with lots of token synergies, you definitely want to run Delina alongside Adrix and Nev and Esix! Similarly, if you have a Mardu deck with Teysa Karlov and Thalisse you’d drop Delina there too.

Just because Delina’s copy token is scheduled to exile at the end of combat doesn’t mean you can’t cash it in for some effect before the end of combat. In particular Fling and Kazuul’s Fury are great for tokens that copy something with a huge amount of power. Yawgmoth can sacrifice the creature to draw a card, and Village Rites and Plumb the Forbidden can sacrifice it for two cards.

Another angle to take with the impeding exile of Delina’s copy tokens is to simply end the turn with that exile trigger on the stack!  Sundial of the Infinite is a weird little artifact that does some really cool things if you’re okay with ending your own turn sooner than normally scheduled. And if you’ve got Obeka, Brute Chronologist as your commander, you definitely should add Delina to the 99!

Lastly, let’s not forget that Delina is a 3/2 creature and very easy to kill in combat so if we’re leaning into Delina we’ll want a fair number of ways to protect her in combat. Protection from Commander’s Plate or indestructibility from something like Hammer of Nazahn go a long way here, as does Dolmen Gate which prevents combat damage.

So, what do you think of Delina, Wild Mage as a Magic card?  Does it evoke any fond D&D memories?  What other sorts of cards do you think would play great in its Commander deck?