Any post-ban Standard is usually in a weird place for a small period. On one hand, the banning of Uro, Titan of Nature’s Wrath was predicted to have little impact on the dominance of Omnath, Locus of Creation-based decks. On the other hand, we have tournament results from things like the Red Bull Untapped qualifiers and Magic Online that seem to paint a different picture.

Then we have the Grand Finals, which has 23/32 Omnath decks. It doesn’t bode well. The professionals all seem to think Omnath is the only thing to be doing while the rest of the world is playing (and winning with) everything else.

Most of us are living in a world where we play on ladder and in open tournaments, so it makes sense to address the format from that perspective. If you manage to qualify for a smaller tournament, you can alter your deck selection. Of course, if Omnath does put up an impressive performance at the Grand Finals, we may be back to where we started.

Overall, I’d say the rest of the world isn’t playing Four-Color Adventures as much as it deserves. It seems like the best deck by quite a bit and even beats the pseudo-mirror Four-Color Ramp.

What Was the Impact of Uro, Titan of Nature’s Wrath Being Banned?

Although Four-Color Adventures showed up before Uro’s ban, not being able to play Uro probably would have forced players to find that deck eventually. Awkwardly, the ban may have ensured people found the stronger Omnath deck. Without Uro, the ramp versions are struggling against aggro decks if they don’t have a good sideboard plan. It seems to be losing to everything.

I was skeptical of the Uro ban doing enough to fix the format. It did move us past the ramp phase of Omnath but the threat is still there.

It’s unclear whether Adventures will keep Omnath or return to Temur, but one thing’s for certain and that’s the necessity for Lovestruck Beast and removing Giant Killer. Luis Scott-Vargas and his squad correctly identified the Grand Finals would consist of mostly mirror matches but I wouldn’t play without Lovestruck Beast in an open field or on ladder.

This list lacks one of the best ways to interact with aggro but you can usually get similar results with Brazen Borrower giving you time to set up Omnath anyway. It’s a solid hedge. Instead, LSV focused on streamlining the decklist and increased the land count in order to ensure he would have access to his colors and curve out appropriately. When you’re playing the best deck, that’s a fine route to take.

I could go deep on what should be in the Fae of Wishes sideboard and why. Instead, I’ll trust LSV and his team that yes, you do need Storm’s Wrath and Shatter the Sky in the sideboard. Granted, they could be planning on sideboarding those in and it makes sense to split copies to obscure your plan.

Honestly, I think it’s Four-Color Adventures, but with a caveat. The stock versions of the deck aren’t correct. They lack ways to remove Lucky Clover in the mirror (which LSV’s deck also suffers from), which means nothing really matters except for who gets off to the best start. If one player copies a Fertile Footsteps, followed by an Escape to the Wilds or copied Granted, it’s all over and there’s no coming back.

Mystical Dispute was typically the card people would lean on in order to get an edge in midrange mirrors but it’s not effective against the current builds. They don’t lean on resolving Omnath or Genesis Ultimatum. Countering Escape to the Wilds is impactful but Mystical Dispute isn’t the best card for that job. 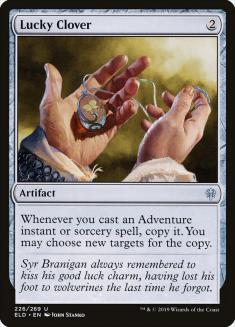 Four-Color Ramp is the most powerful deck in theory but they’ve failed to fix their issues. If and when that happens, we could see players move away from Lucky Clover. Trying to win the game with Ultimatums that put out Beanstalk Giant and Kenrith, the Returned King doesn’t work against Brazen Borrower and Giant Killer, especially when the Adventures decks can go over the top.

My win condition has been trying to maximize Felidar Retreats by building wide battlefields. It insulates you from dying to the Beanstalk Giant plan in the mirror and can help run Adventures out of answers. Retreat gives you a relatively cheap threat against control decks too.

That solves one of the problems but doesn’t necessarily fix the Lucky Clover issue, nor the aggro matchup. Those are things I’ve been working on but I’ve been distracted by the recent success of non-Omnath decks and have been working on those instead. Shredded Sails maindeck can help, especially if you have a good sideboard plan for aggro. Mine has typically been Bonecrusher Giant and Elder Gargaroth and that’s usually worked well.

If you’re trying to play something that isn’t Omnath and figured out how to beat Omnath, you still have one other issue to deal with.

With Four-Color Adventures supplanting Four-Color Ramp as the Omnath deck of choice, plus Mono-Red Aggro, Rakdos Midrange, and Gruul Adventures out there, Bonecrusher Giant is one of the most popular cards in the format. Many of those decks rely on Stomp to keep pace with their opponents, which can go horribly sideways if your opponent doesn’t play into it.

When looking for non-Omnath decks, you’re probably looking to play a deck with creatures and beating Stomp is your biggest obstacle. I suggest doing whatever you can to ignore Stomp as best you can. This means either going wide around it or playing two-drops that don’t die to it. Sadly, our card pool is small, so we don’t have a ton of options. Magmatic Channeler has given rise to Rakdos Midrange, a deck that has very few juicy Stomp targets.

Hibananafish is playing a similar deck in the Grand Finals, with four copies of Duress maindeck.

Rakdos Midrange is surprisingly strong. Over the last year, I’ve had to learn the hard way that Mire Triton and Tymaret Calls the Dead typically lead to bad decks. That doesn’t seem to be the case anymore. It’s not explicitly an aggro deck but it does rely on creatures.

One of the main reasons Rakdos is viable is because your best two-drop is Magmatic Channeler, which doesn’t care about Stomp or the 4/3. It’s always building toward escaping Kroxa, Titan of Death’s Hunger, which also laughs at Bonecrusher Giant. Your deck has some Zombie tokens and Mire Tritons but you’re still getting favorable exchanges against Bonecrusher Giant.

I assumed the new best deck in Zendikar Rising Standard was going to be one that could easily handle Lucky Clover and Four-Color Adventures as an extension. White seemed to be the color that could do that the easiest, thanks to Skyclave Apparition.

As it turns out, I vastly overlooked Shredded Sails. 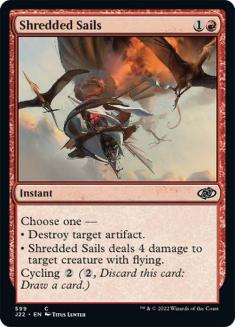 Embereth Shieldbreaker is excellent out of decks that are trying to keep up pressure and don’t care about removing flyers. It’s especially potent in mirror matches because you can use it alongside Lucky Clover to destroy multiple opposing Clovers. Obviously Shredded Sails is at its best when Rogues is also a significant portion of the metagame, so you don’t feel bad maindecking it. Sideboarding it is a fine option and the route MJ chose to take.

The biggest question mark is whether the discard deck can stand up to Omnath-fueled card advantage machines. My guess is no, especially if players are prepared. However, we’ve seen a distinct lack of Omnath in the recent week, so maybe Rakdos is poised to take these next couple of weeks by storm. If Omnath does poorly in the Grand Finals, I’d certainly expect it.

MJ’s list has more disruption and fewer Mire Tritons, further insulating himself from opposing Stomps. It’s a valiant direction but one that seems wrong to me. The matchups against midrange, control, and aggro are all stronger when you’re focusing on playing to the battlefield and less on spinning your wheels. Ensuring Kroxa has enough food is also of the utmost importance.

Regardless, you should give this deck a try. Even if you think the Omnath matchup isn’t great or you think it looks like a pile, I think you’ll be pleasantly surprised by how strong it is.

There’s been a ton of supporters for the Dimir Rogues archetype, especially since Uro’s ban. Although Uro wasn’t game-ending, players have been experimenting with different builds, trying to find the right mix for the metagame. One of the biggest issues is that your metagame is going to vary wildly depending on where you’re playing. 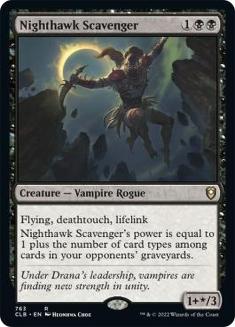 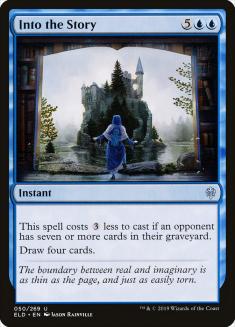 An anti-aggro build with Nighthawk Scavenger is probably best for laddering and smaller tournaments but I would expect more Omnath decks in invite-only tournaments. The Into the Story builds are excellent against control decks but a tad too slow for fighting aggro. A heavy counterspell build will thrive against Four-Color Ramp but isn’t necessarily the right way to fight Four-Color Adventures.

As always, Lucky Clover is difficult to deal with but that issue is further exacerbated in Dimir. There aren’t clean answers, so you either have to ignore it, counter it, or try to bounce it and counter it. None of those options are viable. Hoping they never draw it or have a bad draw alongside it isn’t the best plan either.

Only one person, Seth Manfield, admitted to registering Rogues for the Grand Finals and it’s easy to understand why.

The Way to Get Stomped and Not Care

Autumn (and Emma Handy’s) deck is one of the most distinctive takes on a known archetype in the field and I say that in the most complimentary way possible. They took the best things from Gruul Adventures and Mono-Green Aggro, had a keen eye on how the format was evolving, and presented a 75 I don’t think anyone else in the field could have come up with.

This version of Gruul Adventures solves the Bonecrusher Giant issue by having a one-drop that usually has to be dealt with. Plus, the three-drops can’t be Stomped and will usually be five toughness, so they get to attack the 4/3 anyway. Then there’s Embercleave to really punch through.

No matter what you select as your Zendikar Rising Standard weapon of choice, you need to be prepared for Bonecrusher Giant and Lucky Clover. There are smaller considerations but you’ll go far if you have those two handled. It should be telling that each list in this article has four copies of Bonecrusher Giant.