This might come as a surprise but I’ve been as excited as anyone to brew with Modern Horizons 2.  The goals within development — trying to execute properly on themes, keep things balanced (at least as much as possible), and ultimately make a cohesive card file that will excite players — all require a different purview from maximizing deckbuilding for enjoyment.  Also, well, we can change the cards in the office and now the text boxes are stagnant.  Rather than trying to make educated guesses on what the most enjoyable outcomes are, I’m now stuck with reality, and getting to work takes on a different meaning.

That’s a long-winded way of introducing the fact that I’ll be dumping a lot of decklists on you today, all of which are largely exploring various Modern Horizons 2 cards and themes.  I talked about Jund Midrange last week, and many of my co-workers have covered various portions of Modern Horizons 2 that I’ll be overlapping with, but as usual I’ll try to explain my thought process of why I was interested in trying different things or reached various conclusions.  With perhaps only one exception, most of these decks are explorations to learn and get a feel for the new format rather than tuned strategies that are optimized for power.  I like to work quickly, learn something, and move on; the incentives are just positioned that way for me these days rather than trying to build the best deck in the format, particularly with the current absence of tournaments.

I built a lot of Reanimator shells.  I’ve seen Orzhov builds, decks that function more like Dimir Control decks that use the Reanimator package as a hybrid kill condition/quick proactive threat, and various Rakdos decks.  I wanted to try to do things a little more off-beat.

Taking some inspiration out of Sam Black’s playbook, I thought it would be interesting to try to combine a sleek Reanimator package with some value sacrificing.  Mayhem Devil is fairly well-positioned in the metagame as a whole — Food, Hardened Scales, and similar strategies are interested in sacrificing their permanents as a default, and everyone’s got fetchlands that can generate you incidental damage.  Further, Seasoned Pyromancer is a nice bridge between a go-wide and Reanimator strategy.

I liked a lot about this deck, but the core package of Gravecrawler, Carrion Feeder, and Bloodghast feels a little underpowered unless you have Bombardment or Devil going.  Like I said, the Reanimator aspect isn’t really the star of the show, but I’ve found finding incidental ways to use the cards, like casting Unmarked Grave for Bloodghasts or being able to Persist lower-value but still-impactful targets like Mayhem Devil, to be important.

I’m honestly pretty proud of this one.  Profane Tutor has impressed me as a “fair card” and it works beautifully with Dreadhorde Arcanist.  The opportunity cost is relatively low — if you can interact on the first and third turns, it’s easy to incur the cost of taking your second turn off, and in some cases it being on delay can actually be a benefit for seeing how the game develops.  The “full combo” is on Turn 4, being able to tutor for Persist / Unmarked Grave, Arcanist attacking flashes back the Tutor and gives you the second piece, and it’s all rolled up.  Kroxa is a perfectly acceptable backup plan to Tutor. 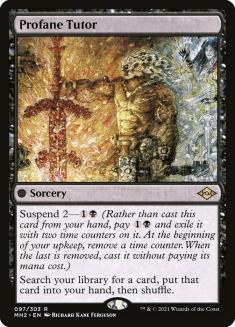 After sideboarding, Profane Tutor lets you pick up any of your hammers; convenient timing for Shatterstorm and Damn, this application specifically makes me believe it’s worth exploring Profane Tutor + Dreadhorde Arcanist in a variety of spaces.

As for the deck itself, it might be trying to be a bit too clever, but it’s definitely got some powerful stuff going on.  I included Electrodominance and Finale of Promise as tutor targets to let you backdoor into Crashing Footfalls in a variety of ways, but the A Plan is certainly to get Footfalls in the graveyard in some manner and attack with Arcanist backed up by disruption and interaction.

I also really like that Tutor lets you go leaner on the whole Reanimation package.  Persist is particularly weak with Dreadhorde Arcanist, so I wanted to play as few of them as possible – only having to devote seven slots, with Unmarked Grave playing double duty is pretty sweet.  I probably should look to include Raven’s Crime / Life from the Loam here, but that’ll come later.

A little less interesting, but I agree with Sam that Priest of Fell Rites is very strong and I genuinely believe that Smallpox is an under-appreciated card in terms of its power level in Modern.

Most of the cute stuff I’ve already covered, but I like that recurring Fulminator Mage is a valid backup plan here.

In terms of power level, I think this deck is a little less functional than the others, but there’s something interesting here.  Porting Historic Rakdos Arcanist to Modern isn’t exactly the most groundbreaking revelation, but Crashing Footfalls is a huge shot in the arm for Arcanist’s most powerful draws if we can find a way to make it reliable.  Perhaps you need to engage with the self-milling portion of the Historic strategy and go back to Stitcher’s Supplier and ways to sacrifice it.

This deck is a little closer to a failure, but I think it’s almost there and at least interesting enough to show off.  For some reason I had it in my head that Through the Breach + Archon of Cruelty = eighteen damage, but it turns out twelve is significantly lower than eighteen.  That said, it still leaves you in an extremely advantageous position and Archon is deposited in your graveyard for future persisting.

That said, the straightforward version of Through the Breach + Emrakul, the Aeons Torn is a solid combo/control deck that got a nice pickup in Fire // Ice.  If there’s something in this space, Prismari Command will be the true hero, bridging everything you need in interaction, acceleration, and a discard outlet.

Play Dragon’s Rage Channeler in more of your decks.  It takes a little work, and it isn’t a perfect fit in every lean Lightning Bolt deck, but it’s pretty close.  You can probably tell that I also think it’s excellent alongside Stoneforge Mystic. It’s a good wearer for Sword of Fire and Ice.

Gifts Ungiven is pretty 2005, but Modern Horizons 2 has given it some real upgrades.  I definitely think it’s worth pursuing Gifts Ungiven as the one-card enabler for the combo/control variant of Reanimator, and once again being able to use Unmarked Grave for non-Reanimator applications; here, assembling Life from the Loam / Raven’s Crime is excellent. Loam should likely be going into more Reanimator strategies generally. I did learn that Gifts Ungiven gets massively dunked on by Veil of Summer, so that’s something to watch out for.

I used Gerry’s shell for Golgari Food and (I think?) improved it by adding Life from the Loam + Raven’s Crime, giving you yet another value combination to assemble, as well as enabling the ultimate inevitability of Loam + Urza’s Saga. 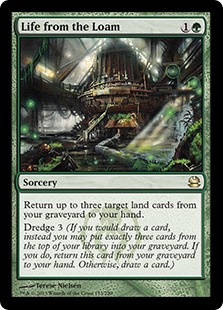 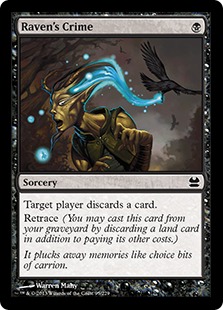 If you’re playing Trail of Crumbs you should definitely be playing Foundation Breaker as your hate card-beater of choice.  It can also be recurred with The Underworld Cookbook.

I wonder if Unmarked Grave could do some good work here, but adding too many spells definitely makes your Trails weaker.

Spreading Seas is probably the best it’s ever been as a foil for big mana strategies but also being a cantripping Sinkhole (that provides delirium!) against Urza’s Saga.

The details of how to build this deck are tricky. I didn’t originally have Lurrus, but it didn’t take many cuts to include the powerful companion, although the concessions to the manabase are more real than you would think.  Once you’re already interested in playing Mishra’s Bauble, it’s fairly difficult to justify not playing it though. 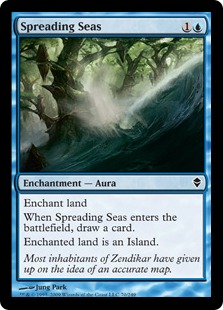 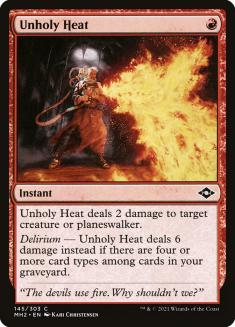 Streamers have started to come to the correct conclusion that Unholy Heat is extremely powerful.  These Izzet-based shells have a ton of flexibility in how you build them and are difficult to get right, but I definitely think it makes a ton of sense to explore them as they’re probably some of the best places to include Seas to fight the powerful Saga.

This deck is such a blast to play, but is also incredibly difficult and complicated.  Again, there’s a lot of flexibility here between all the various enters-the-battlefield creatures, an Eladamri’s Call toolbox, and pitch-Elementals that also work great in Ephemerate shells.  You can basically adapt and metagame for anything you want, so I suspect strategies like these will only improve as the shape of Modern starts to solidify.

For our last deck today… I don’t say this lightly, but I think I might have broken it?

Deck mashups have produced some of the strongest decks of their respective formats, and I’m not convinced that this is any different.  You might say I added a bunch of expensive cards to Temur Crashcade, but in reality I just gave Five-Color Niv-Mizzet the proactive game plan of “put ten power onto the battlefield” instead of casting Lightning Helixes before deploying their namesake.

There really isn’t that much to add here. This deck is pure unbridled power.  Niv-Mizzet probably won’t pick up that much interaction when you cast it, but it’ll almost guarantee you to pick up about four more Rhinos.  Omnath is your “C” plan of being strong against everything and giving you crazy swing turns. 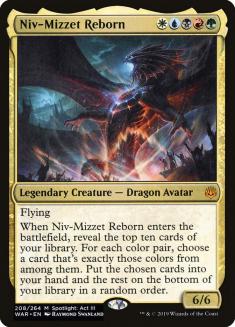 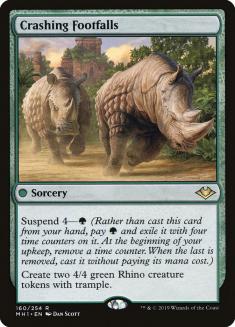 I’m not sure how many bullets you actually want or need, but I feel like giving yourself four functional sweepers in your maindeck gives you a balanced game against just about everything and Temur Crashcade was sorely lacking any way to play catch-up in games it was losing.  Your sideboard also has the potential to be far more robust now. I didn’t go too deep on the options available to you, but again as the format starts to take shape, the ability to do so is there.

I’ve had a total blast playing and brewing Modern this week. I hope you’ve been enjoying Modern Horizons 2 as well!