Despite much of the Magic discourse revolving around Uro, Titan of Nature’s Wrath, I’m still a Spike at heart, so I’m going to try to do the broken things. On that note, meet Uro’s new best friend, Omnath, Locus of Creation.

Omnath provides a reasonable amount of value, even if it is immediately removed. If you can follow it up with a land drop, you can pad your life total. If that land is a Fabled Passage, you get your mana back. If you can sandbag enough landfall triggers, Omnath becomes a powerful, one-sided sweeper. The mana from the last landfall could even be used to fuel the third landfall.

We don’t have the Elemental synergies from Core Set 2020, the acceleration of Nissa, Who Shakes the World, or the end-game of Hydroid Krasis. Ramp decks needed a new payoff and Omnath, Locus of Creaton could very well be that card.

Unlike its predecessors, Omnath adds a white pip into the mix. While that adds a certain amount of restrictions, it also comes with the incredibly beneficial lifegain ability, so I’m not upset. Is the mana doable, even without Ravnica’s shocklands? Given that we have access to Triomes, Pathways, Temples, Fabled Passage, and green’s mana fixing, it seems like an easy yes.

Depending on how we build our deck, we also have access to Cultivate, Beanstalk Giant, Lotus Cobra, and Dryad of the Ilysian Grove, among others. It’s also worth noting that Bala Ged Recovery gives us a reason to play more lands in our decks, allowing us to have more colored sources in general. It also gives us a way to mitigate flooding later, perhaps by returning something powerful from our graveyard like Omnath.

The Pathways are incredible. If you have a light splash and were going to play a bunch of Forests anyway, why not use Branchloft Pathway? There is some tension between trying to get the right amount of sources of each color in your deck in order to function and wanting to have basic lands to fulfill things like Fabled Passage and Cultivate, but we can figure it out.

It’s worth noting that while Fabled Passage and Pathways will allow your total number of each source to be high, once you choose which color you’ll have access to, that’s it. Fabled Passage isn’t a multicolored land, so it’s not like drawing one copy will fix all your mana issues. Thankfully, there are actual multicolored lands like Triomes to help fill in those gaps.

Since Omnath clearly wants you to trigger landfall multiple times, using it as a closer in a true ramp deck makes sense.

Omnath into Fabled Passage into ramp spell to sweep your opponent’s side of the battlefield? Omnath into Fabled Passage into Jace, Mirror Mage with kicker? Maybe Elspeth Conquers Death? The possibilities are endless and you’re also drawing a card and gaining some life in the process. It makes me think that a single copy of Evolving Wilds could be worth it just to maximize Omnath’s power.

I’m conflicted as to which path to fully commit to, so this deck has a little bit of everything. Sticking to a midrange card advantage plan with Elspeth Conquers Death and Shark Typhoon is almost always going to be solid, but there’s also Wolfwillow Haven and Ugin, the Spirit Dragon at the top-end.

I fully expect creature decks to make a comeback due to the powerful one-drops previewed so far. If that’s the case, ramping to Ugin is probably a good plan due to the lack of counterplay against it. Four Shatter the Sky seems like a given too.

Jace, Mirror Mage seems fine here. We don’t have much to protect it, although we could build the deck a little differently to accommodate that if we wanted. I fully expect my Jace to die at some point but it’s a good way to spend extra mana in the mid-game and we want things to bring back with Elspeth Conquers Death anyway.

Bala Ged Recovery is a head-scratcher. 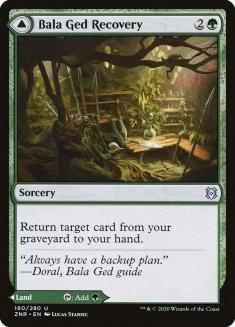 I’m a fan of modal DFCs in general but a land and Regrowth split card seems very strong for ramp and control. We’re not nearly at a point where we can start complaining about how ramp decks never run out of gas but we’ll probably get there. Similarly to Uro, we should play the best cards and the best strategies until they don’t let us anymore. In the meantime, I’ll be wondering why this card exists.

What about the new anti-ramp hate card, Confounding Conundrum? 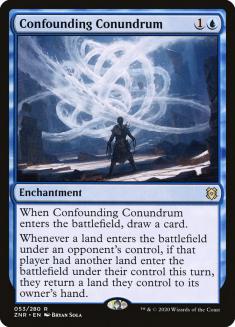 In short, I don’t care. Similarly to Roiling Vortex, the way to stop people from cheating on mana isn’t by paying two mana for a mostly useless enchantment.

For the most part, I’m playing more copies of the cards I was already playing, except in instances where I wanted things like Omen of the Sea for additional synergy with Yorion, Sky Nomad. For the most part, Bant Midrange doesn’t care too much about which specific cards it draws, so the inconsistency of 80 cards isn’t detrimental. However, I’d like to maximize Omnath, which means drawing Fabled Passage and Omnath together as often as possible.

In theory, we could also build Temur splashing white for Omnath but that would require something like Deafening Clarion, Solar Blaze, or Anger of the Gods as a sweeper. I expect Zendikar to have something along those lines but Shatter the Sky is all we have at the moment. If there were another red card we wanted to splash, we could, but I didn’t see anything appealing.

Simic double-splashing Omnath? Sure, why not.

This deck tries to use Jolrael, Mwonvuli Recluse alongside cantripping creatures like Uro and Omnath to create a steady stream of threats, which can also protect Jace, Mirror Mage. You can either win by riding a tempo advantage or winning long games with all your value. Jace, Mirror Mage is specifically worded differently than you might expect, possibly so that it can work alongside Jolrael. It’s weird, but I’ll take it! 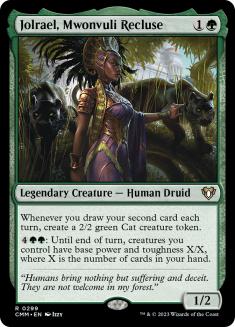 Lotus Cobra is great at fueling decks like these. It’s easy to kill, but if left unchecked it can fuel truly broken turns. Double Lotus Cobra with a Fabled Passage should be game over. It’s also another instance of Bala Ged Recovery helping give you reliable landfall triggers when you need them. Split cards give you agency and ensure your cards are more likely to be functional, which makes me happy.

I can’t resist adding an Into the Roil, even if it’s worse than Brazen Borrower. In theory, it can protect your own threats and the cantrip can fuel Jolrael. Having a mix could be better.

As far as the top-end is concerned, clearly I’m torn. Gadwick, the Wizened might be the strongest of the options but Boon of the Wish-Giver has more utility. Of One Mind could also be weaker than either of those but is worth trying alongside Jolrael.

One of this deck’s biggest weaknesses is decks that go wide. Simic doesn’t have many great answers, even weird narrow things out of the sideboard. Ideally, that’s where Omnath comes in, but this deck isn’t fully equipped to trigger Omnath’s third ability reliably. Hopefully we see some more landfall generating cards in the set so Omnath can reach its full potential. In the meantime, I’ll lean on Elder Gargaroth against aggro decks and hope it’s good enough.

You could build a cleaner, two-color version of this deck with Gilded Goose and Lofty Denial if you wanted. Omnath plays well with the ramp and Jolrael, so it’s worth trying.

This one is exciting, although I desperately want Risen Reef. We’re trying to develop our battlefield, gain some card advantage, and hopefully do some ramping in the process. At the top-end, we have Genesis Ultimatum to fuel combo kills with Terror of the Peaks. We also have plenty of bodies to protect Jace, Mirror Mage and Vivien, Monsters’ Advocate, which are great sources of card advantage.

If you’re already making different colors of mana, Kenrith, the Returned King is a sleeper pick. Giving everything haste after a Genesis Ultimatum is a cool way to win the game and functionally gives you more copies of a combo finish, similarly to Terror of the Peaks. 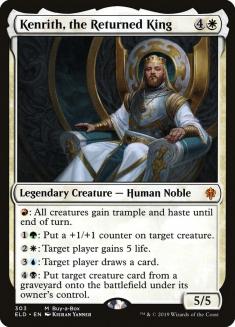 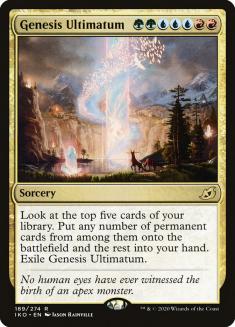 Generating four different colors of mana is comically easy, especially if you’re green. Making landfall triggers isn’t difficult if you’re careful with your Fabled Passages. Having a midrange threat that scales well into the later stages of the game tends to be a staple in lower-powered Magic, at least ones that aren’t dominated by oppressive strategies. All of that adds up to Omnath, Locus of Creation being a solid threat in future Zendikar Rising Standard events.