When previews first started up for Streets of New Capenna, I have to admit to overlooking casualty as a mechanic when it comes to Commander. Sure, it seemed fine for Aristocrat strategies where you are constantly sacrificing your own creatures to grind your opponents down in life and card advantage, but honestly there is no shortage of good cards for that strategy.  But over the past couple weeks I’ve come around on casualty as a nifty mechanic with broader applications.

It reminds me of the card Plumb the Forbidden, which makes a copy of itself for each creature you sacrifice. 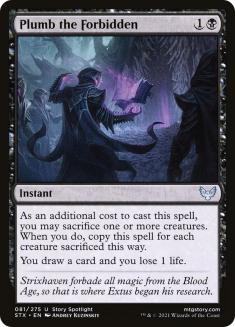 Trading a creature (a resource on the battlefield) for another resource (a virtual card on the stack) as you copy the spell, is a price you can easily pay depending on the creatures you want to use as sacrifice fodder and how powerful the spell is that you’re copying.  Keep in mind, the copy of the spell is created on the stack, so it’s not “cast.” Abilities that trigger when a player casts a spell won’t trigger.  Let’s dig into some of the most powerful casualty cards that we’ve got currently. 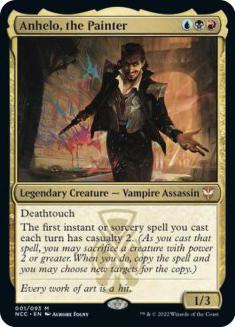 First up is Anhelo, the Painter. This card makes a pretty potent commander since it gives any instant or sorcery spell in your deck casualty 2 so long as it’s the first one you cast each turn. Imagine getting to copy Demonic Tutor, Jeska’s Will, Dig Through Time or Torment of Hailfire!  Anhelo makes a pretty cool generic Grixis commander since you can just put in creatures and spells you like and Anhelo will push some value your way. Black in the color identity means you can put in all sorts of creatures that come back from the graveyard and make easy casualty fodder. And keep in mind, Anhelo’s ability works for the first instant or sorcery you cast each turn, including on your opponents’ turns, so make sure you have a good number of instants and ways of giving sorcery spells flash. 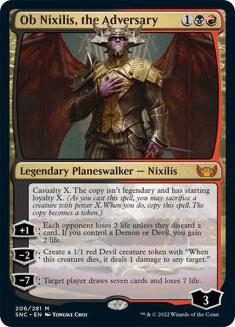 Ob Nixilis, the Adversary is one of the breakout Streets of New Capenna cards in Standard, and if you haven’t watched any Arena game play videos with decks that make a nonlegendary copy of Ob Nixilis and then sometimes copy the copy with Esika’s Chariot you’re really missing out!  In Standard Ob Nixilis is generally toggling between its +1 and -2 loyalty abilities in a slow grind of damage.  But in Commander, the chance of sacrificing a creature with seven or more power is much, much easier which unlocks the -7 ultimate ability where target player draws seven cards and loses seven life, doing a pretty good Griselbrand impression (which happens to be banned in the format). 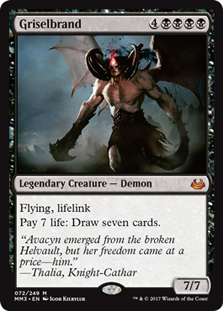 This idea motivated me to change up my higher power Dargo, the Shipwrecker, which had been Gruul but wanting to add Ob Nixilis means I’m going to swap my mono=green partner with a Golgari partner so that I can sacrifice Dargo to Ob Nixilis and immediately draw seven fresh new cards to keep the shenanigans going. 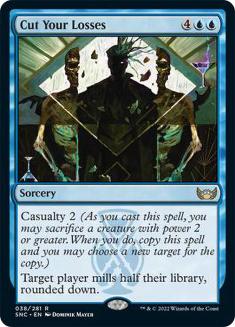 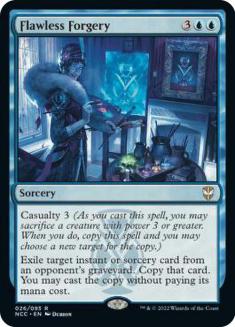 Blue has been getting some crazy mill cards of late in Maddening Cacophony and Tasha’s Hideous Laughter, and we’ve got two casualty cards that slot right into that strategy.  Cut Your Losses is Traumatize for one extra mana, but with casualty you’ll get two copies of it, which will dump a bunch of an opponent’s deck into their graveyard.  Flawless Forgery takes advantage of milling by opening up more possible instant or sorcery cards to copy. 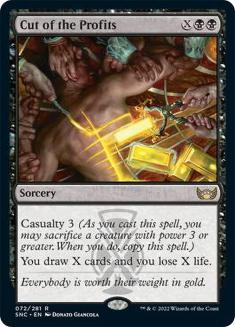 I haven’t heard much buzz on Cut of the Profits yet, but I think as more people try it out it’ll catch on.  Casualty 3 is a bit high and pretty much excludes most of your typical cannon fodder, so you’re going to need to sacrifice a significant creature in most cases, so I expect that Cut of the Profits will used with X=3 or higher so that you’ll draw six or more cards. In a mono-black deck with access to cards like Cabal Coffers and Crypt Ghast, the value for X can be much greater.  Black has plenty of ways to offset the life loss and this card will help you find them. 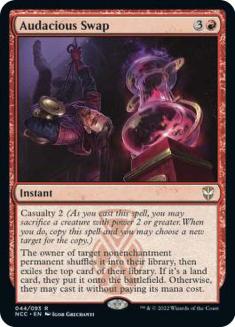 Audacious Swap is a slightly tweaked Chaos Warp for one mana more and with casualty, you’ll get to target two non-enchantment permanents. I’m not entirely sure this is going to be worth a four-mana slot but I’m definitely willing to give it a shot! 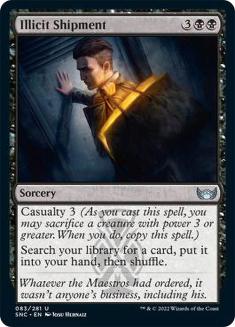 Combo fans are going to love Illicit Shipment, which lets you go and search for two key cards from your deck and put them in your hand. But even if you’re not playing combos, Illicit Shipment can let you go search up an answer card for the battlefield state you need to deal with, and then a follow up card, or it can just go get two of your favorite cards in the deck. One card I imagine getting with this will be Phyrexian Reclamation to go get back the creature I sacrificed to casualty.

The rest of the casualty cards are a little less powerful but worth taking a quick look at.

Xander’s Pact is like a mini-Villainous Wealth for everyone, but I definitely wouldn’t consider playing this card if I couldn’t copy it with casualty since chances are high that you’ll either hit a land or a spell you’re not wanting to cast. But I like the randomness of this sort of effect since you just don’t know what you might hit.  The other three are mostly aimed at Limited but could find a home in some decks.

A Little Chat definitely rides a fine line being playable in Commander, but if you’re playing a fair number of creatures that might want to be killed by your opponents, it’s certainly worth keeping this up and sacrificing your targeted creature to cast this and copy it, like a blue, mini-Plumb the Forbidden. The other two are probably aimed at Limited, but I could see some aggressive decks making use of Rooftop Nuisance to tap down blockers, draw two cards and get a few attacks through. 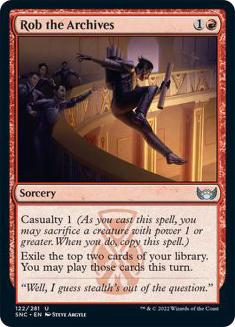 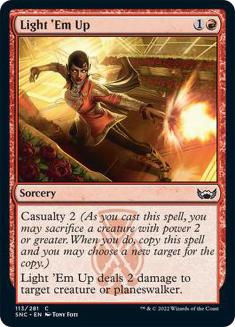 Assuming the casualty ability is paid, Rob the Archives offers a pretty potent effect letting you exile four cards from the top of your library that you can play this turn. Since Rob the Archives only costs two mana chances are pretty good, you’ll be able to play at least one of those cards and hopefully play a land too.  Light ‘Em Up has got a fun name, but pretty well powered for Limited outside of maybe Torbran, Thane of Red Fell.

When comparing Plumb the Forbidden with casualty, we should keep in mind the main mechanic from the same set as Plumb — magecraft, from Strixhaven: School of Mages. Magecraft triggers off instant or sorcery spells that are cast or copied, so each non-Ob Nixilis card with casualty will also trigger magecraft for added value. Sedgemoor Witch in particular seems like a great addition here since its magecraft ability creates 1/1 Pest creature tokens, which are perfect sacrificial fodder for casualty or other effects.  Deekah, Fractal Theorist is also fantastic since it likely makes Fractal token creatures that are large enough to satisfy the higher cost casualty.

When looking for cannon fodder to feed to casualty, my go-to cards are things like Reassembling Skeleton and Bloodsoaked Champion. But some of the casualty cards require three power creatures, so we should also slot in things like Skyclave Shade, Death Tyrant and Ebondeath, Dracolich.  Creatures with undying or persist are also nice since they will come back to the battlefield the first time they die.

Outside of Sedgemoor Witch there are other ways to create token creatures you can sacrifice to casualty.  Young Pyromancer doesn’t count copied spells, but it’ll still generate an Elemental token for the spell you actually cast. For a card like Hangarback Walker sometimes you want to it to die so you can get all of the 1/1 Thopters, so sacrificing it to casualty is perfect.

Another thing to look at are creatures with dies triggers that you can leverage for additional value. Kamigawa Dragons like Atsushi, the Blazing Sky and Kokusho, the Evening Star immediately spring to mind!  For non-token deaths Blight Mound will give you Pest tokens, while Gadrak, the Crown-Scourge will give you Treasures on your own turn.

Ruin Grinder is expensive, but its power will satisfy Ob Nixilis’s Griselbrand aspirations and draw you a full grip of seven new cards.

One last angle for casualty cards to consider are ways to steal creatures from your opponents that you can sacrifice rather than give them back.  Captivating Crew, Coercive  Recruiter, and Act of Treason are ones that quickly spring to mind.  I also like Coffin Queen for reanimating a creature from a graveyard you can sacrifice to casualty and then bring back with Coffin Queen again.

What do you think of the casualty mechanic?  Which Commander decks are you planning on slotting in some casualty cards?