Welcome to Deck of the Week, where I’ll pop the hood on one of my paper decks and show you all the gory details.  This week I’ll share my current list for Chun-Li, Countless Kicks, which I recently was able to build when I received the Street Fighter Secret Lair. While I’m not a fan of Street Fighter (I don’t really play video games other than Magic Arena these days), I did find several of the designs quite interesting to build around. The first one I got pulled together and sleeved up is Chun-Li, Countless Kicks! 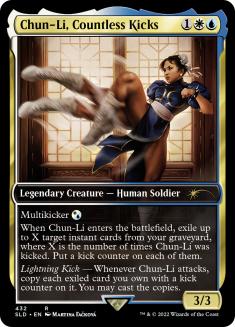 Most Azorius commanders don’t really call to me, but I really like the sort of game Chun-Li wants to play. Namely, you get your value from attacking, which tends to make Commander games more exciting and interactive. I also really like that once you’ve exiled instants with kick counters on them, they’re available whenever the condition is met, even if the Chun-Li that originally kicked them into exile has since been destroyed and redeployed from the command zone.

How I envision the game playing out: in the early turns, I’ll cast two instants with useful abilities attached to them. Once I reach five mana, I’ll cast Chun-Li from the command zone and kick it twice. If Chun-Li gets killed, I already have enough mana available to cover the command tax and still have those two instants in exile with kick counters on them, ready for Chun-Li to attack and squeeze value out of them.

One angle I’m interested in having are ways to return Chun-Li to my hand later in the game so I can recast with kicker to remove a few more instants that may have accumulated in my graveyard.

Let’s take a look at how my deck shaped up:

I definitely would like to include an instant that draws a card among the first batch of exile kicks. Brainstorm, Impulse and Opt are the best of the bunch, but the others offer some redundancy and utility. Silundi Vision is a little expensive, but I love that it helps dig for more instants to tie together the deck’s theme.

Since I need Chun-Li to attack to get the value, I want to include instant-speed ways that will help protect Chun-Li from opposing blockers. Valorous Stance is the best of the bunch, since it doubles as removal too.  Late-game, having a full-strength Akroma’s Will exiled with a kick counter will hasten games to an end!  And I really like the flexibility of Your Temple Is Under Attack—you can use it as protection for your attack, but you can also use it to bargain with an opponent for two extra cards.  Say, let me attack you with Chun-Li for three damage, and I’ll let you draw two cards alongside me?  There might be times when that’s a solid bargain.

Instant-speed removal is already a good inclusion for most Commander decks, and it can do great work here.  I personally wouldn’t be kicking one of the creature removal spells into exile with Chun-Li in the early-game, since it could lead to a very oppressive game state if nobody happens to have removal for Chun-Li by your next attack step. Late-game, when everyone is looking to close out the game, then it seems fine.

True Polymorph is one of my favorite new “big game” instants, and I’m thrilled to slam it into this deck. Being able to change an opposing threat into a much less threatening thing or changing one of your small things into something awesome is just good clean fun. My personal quest is to turn a token into a copy of someone’s The Great Henge at some point.

When sifting through my blue boxes, I ran across Turnabout. While I haven’t had the chance to play it yet, I’m hoping for some good things. Either it will let me untap all my lands for more mana in my turn, or I can tap down a player’s blockers. I might even want to tap down someone’s Treasure tokens to set up a “use them or lose them” situation.

Disorder in the Court is another fun card I haven’t had a chance to play with that seems like it could be good fun in this deck.

Azorius has a lot of support for “instants matter” and spellslinger strategies, so I’ve crammed a bunch of them in the deck.  I particularly like Niblis of Frost and Wizards of Thay, which further support a more aggressive approach than sitting back and waiting for a combo kill. My body is ready to hard-cast Shark Typhoon and eventually crank out an army of flying Shark tokens with varying sizes!

I’m also digging Tomb of Horrors Adventurer here, since I imagine casting two spells in a turn will be relatively easy in this deck. Remember, the second spell doesn’t have to be an instant, so you can first cast an instant with Chun-Li, then potentially cast a permanent and get a second copy of it—and even a third if you’ve eventually completed a dungeon!

Chun-Li Back to Hand

Run Away Together and You Come to a River are great instant-speed ways to return Chun-Li to hand to recast with kicker.  I also want to work a Crystal Shard into my list soon, having a permanent-based way to do that will be useful.

I’ve also included a variety of interaction outside the deck’s synergies, with a few counterspells mostly here as a way to protect me from dying to a combo, or to protect my battlefield from an untimely sweeper. Ghostly Prison and Wrath of God are there to stop me from getting run over by go-wide strategies. Stonecloaker provides some reusable graveyard control one card at a time and can save a more valuable creature from death in a pinch.

While a bunch of the instants in the deck provide some measure of card draw, I’ve added some more into the deck just to keep my gas tank topped off and ready to rumble. Thorough Investigation supports the aggressive stance of the deck and also provides another way to venture through dungeons.

I’ve added The Council of Four into a few decks since the release of Commander Legends: Battle for Baldur’s Gate, and while I haven’t played a copy yet, I’m really curious to see how it plays out.  I expect it to draw an extra card and create a 2/2 Knight token at least once per turn cycle, especially in Chun-Li.

Every good Commander deck needs some level of ramp, and Chun-Li needs it more than most. Any extra white or blue mana you have can go toward an extra kicker for Chun-Li, and you’re going to want extra mana to cast kicked spells while also being able to cast spells in your hand. I’ve even brushed off my copy of Apprentice Wizard from The Dark for the deck!  Even though it produces colorless mana and can’t directly pay the kicker cost for Chun-Li, it can still help to pay for spells.

I’ve included some non-instant ways to protect Chun-Li too, with Bastion Protector providing indestructible and Swiftfoot Boots providing hexproof and haste.  Blackblade Reforged should make Chun-Li big enough to not die in most combat, and late-game you could potentially kill people with Chun-Li with enough lands on the battlefield.

I’ve rounded the deck out with a few utility lands, particularly Arcane Lighthouse so that you can target creatures that you might not otherwise be able to.  I’m running fewer utility lands than I’d typically run in a two-color deck because I want to make room for more colored mana sources to feed Chun-Li’s multikicker ability.

Dominaria United has some cards that I’d want to consider for the Chun-Li deck. Micromancer searching up one of my many instants seems pretty sweet.  Haughty Djinn’s power won’t be as large as you’d want, since Chun-Li will be kicking some number of them into exile, but the mana discount of casting instants seems well worth it.  Academy Wall lets you draw and discard the first time you cast an instant or sorcery spell each turn, and any instant you discard can be a future kicker target.

Since a fair number of my instant spells could potentially target my own creatures, Vesuvan Duplimancy might be a spicy card to include. Making a non-legendary copy of Chun-Li means I could return Chun-Li back to my hand for a future multi-kicker turn, while still attack with the copy to grind value from the kicked cards. Tura Kennerüd, Skyknight isn’t quite as good as Talrand, Sky Summoner but might be worth a slot. Stenn, Paranoid Partisan naming instant seems like exactly the sort of card we’d want in this deck! Volshe Tideturner seems perfect as a mana accelerant for the deck, it can even pay the kicker cost on Chun-Li. Stall for Time and Take Up the Shield seem like solid instants to add to the mix. If the deck churns out enough token creatures, Raff, Weatherlight Stalwart might be worth a slot.

Here’s the decklist as it stands today:

What would you put in your Chun-Li, Countless Kicks deck that I’ve missed here?