Early this year, I was invited to play a budget deck throw down on the Scrap Trawlers stream. The only problem?  I didn’t have a budget deck in my vast stable of paper Commander decks.  I’ve been actively collecting Magic every year since 1994, and while I have traded away or sold a lot of old cards as they got more valuable, the ones that I love to play with I’ve kept and have them in a lot of decks. Beyond buying singles from new sets as they come out, I generally just build from whatever I have in my collection without a budget in mind.  But this was too fun a challenge to pass up, building a deck that will come in at $50 or less, not counting basic lands!

I very quickly decided to build a mono-green deck. Color-fixing lands can quickly eat up a budget, so not having to worry about that leaves more dollars for fun.  Also, green has a ton of high-quality Commander cards available, so finding budget-friendly options should be easy.  Lastly, I love building and playing green decks, so that was icing on the cake.

I took a look at my mono-green decks to see what might be easily converted to a budget deck and settled on Yedora, Grave Gardener. 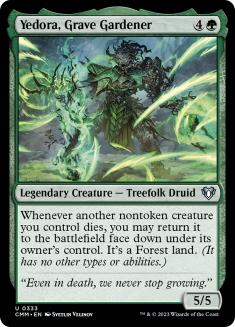 Yedora is a neat card from Commander 2021 that turns any other nontoken creature you control into a face-down Forest creature when it dies. The fact that the creature card is face-down means that if that creature has the morph (or megamorph) ability, you can turn that Forest face up and back into a creature by paying the morph cost.  That synergy was the focus when I originally pulled the deck together and remains in its budget form.

Let’s dig into the deck!

Ainok Survivalist and Nantuko Vigilante are my favorite morphs here, since they can destroy an artifact or enchantment when they’re turned face up. I also love Broodhatch Nantuko as a surprise blocker, preferably blocking a high-power creature without trample. And of course Den Protector getting back a card from the graveyard is always welcome.

If enough creatures die while Yedora is on the battlefield, you can end up a with a huge amount of mana, which you can pump into casting Hooded Hydra face up.  If it dies, you get the Snake tokens, and if Yedora is still out there, you’ll get to take advantage of its morph ability too.

Temur Charger enables some crazy plays, since the morph cost is simply revealing a green card in your hand. With Yedora on the battlefield, if Temur Charger dies, it comes back as a Forest you could tap for a mana and then flip back to a (tapped) creature. I’ll touch more on this below.

For budget considerations I had to remove Guardian Project and The Great Henge from the deck, so I’ve tried to find other ways to keep the cards flowing.  Wall of Blossoms, Elvish Visionary, and Llanowar Visionary are cantrip creatures which can turn into Forests later with Yedora. Harmonize and Shamanic Revelation are budget-friendly ways to draw multiple cards. I’m a big fan of Battle Mammoth as a big beater that lets you draw a card whenever a permanent you control is targeted by a spell or ability an opponent controls. The card is cheap right now, even the really cool Nicholas Gregory borderless art version!

Past the usual lands, I’ve chosen creatures for my mana ramp, since when they die, if Yedora is on the battlefield, they’ll come back face-down as Forests. Sakura-Tribe Elder might make you wait for Yedora before sacrificing for a basic land.

It’s a little mind-boggling Dominaria United brings two new green creature removal spells.  Tail Swipe is as cheap as fight spells can be, and incredibly flexible at instant speed.   Bite Down is another copy of Master’s Rebuke, which is already an incredible inclusion for green decks that have limited creature control options.

Kogla, the Titan Ape is a must-have for any heavily green deck, and while I don’t have many Human creatures to take advantage of Kogla’s activated ability, the fight trigger and destroy trigger more than make this an all-star card.

Landfall triggers happen a lot with this deck, so it’s definitely worth a few dollars of the budget to add Lotus Cobra. Rampaging Baloths is a great budget option that should populate the battlefield quite nicely with 4/4 Beast tokens.

Embodiment of Insight does fun things in Yedora.  If you have a way to sacrifice a creature with Yedora on the battlefield, when it dies and comes back as a land, Embodiment of Insight’s landfall ability will trigger, and you can turn a creature into a land, which you can sacrifice and have it come back as a land with Yedora. In between triggers you can tap the land for mana along the way.

The Fertile Footsteps Adventure for Beanstalk Giant is a nice ramp spell to get to Yedora on the battlefield a turn early, and Beanstalk Giant’s size scaled to the lands you control can end up being really huge with Yedora’s ability. Its size is a great way to power up green’s removal spells.

I love Whisperwood Elemental in this deck. Typically, if you manifest a land or spell, it’s just a 2/2 face-down creature until it dies, but Yedora turns them into land cards when they die. In response to a mass removal spell, you can sacrifice Whisperwood Elemental (which will become a Forest), and then all your creatures that die except Yedora will become Forests, and you’ll manifest a card for each of those. Plus, all those extra Forests will easily pay for commander tax to cast Yedora again.

I just added Stonespeaker Crystal as a way to exile graveyards when needed, and in the meantime provide some extra mana. I haven’t drawn it yet, so I’m not sure that it’s needed on top of Deathgorge Scavenger and Scavenging Ooze.

My original version of this deck had Ashnod’s Altar and Phyrexian Altar, since Yedora does wild things when you sacrifice morph creatures to an Altar for mana, it comes back as a Forest you can tap for mana, then unmorph into a creature you can sacrifice to an Altar again.  Unfortunately, Ashnod’s Altar is  $10 or more, and Phyrexian Altar is north of $20, which will gobble up much of the budget.

Evolutionary Leap is pretty sweet since tapping a face-down Forest for mana pays the activation of Leap, and if your morph is cheap enough (remember Temur Charger?), you can fill your hand with creatures whenever you want to. Greater Good is another nice one if the creature is big enough, and thanks to multiple printings, Greater Good can be worked into the budget for $3 or less.

I’m excited about Magus of the Order here. Sacrificing two creatures with Yedora on the battlefield will give you back two Forests and go get one of several big creatures in the deck.  Sadly, Craterhoof costs more than $20 and doesn’t fit in the budget, but we have other options.

Speaking of options, Kamahl, Heart of Krosa does a decent mini-Hoof impression, while also providing an excellent mana sink for the late-game.  I also like having Silklash Spider in the deck to keep the skies clear of pesky flyers.  With a big enough creature – or something with deathtouch like Deathmist Raptor – Spinning Wheel Kick is a fantastic mana sink that will dramatically alter the battlefield balance of power.

Multani, Yavimaya’s Avatar does some big work in this deck.  First, it gets massive when each creature that dies becomes a Forest. And if it’s in the graveyard, you can use its ability to return two face-down Forest lands that don’t happen to be morph creatures and play them again.  Quirion Ranger and Scryb Ranger are other ways to bring face-down creatures that are Forests back to my hand to cast again.

Okay, here is the decklist as it stands today:

What budget cards would you put in your Yedora, Grave Gardener deck that I may have missed here?  Do you have any other green legends that make a good budget commander?