When The Brothers’ War debuted on Magic Arena, one of the new legendary creatures I built Historic Brawl decks around was Ashnod, Flesh Mechanist. 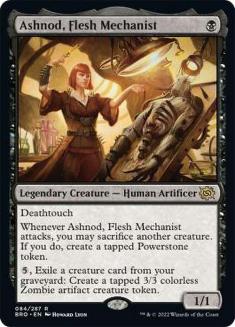 I really liked how the card took a very black mechanic—creatures that die and then come back or make a creature token when they die—and used it to support casting artifacts or fueling activated abilities with Powerstones. I had so much fun with the Brawl deck on Arena that I decided I just had to build this in paper for Commander.  The Commander card pool is much larger than Historic’s, so I was stoked to find more creatures I can sacrifice to Ashnod’s attack trigger, more artifacts and activated abilities to use the Powerstone tokens for, and more ways to protect Ashnod so that she can keep attacking turn after turn after turn.

This is a pretty new deck and I haven’t had too many reps with it yet, so I’d love to hear any feedback if you’ve experienced Ashnod in the wilds of Commander gameplay out there.  I really like what I’ve experienced so far, and I’m eagerly awaiting fun new artifacts or activated abilities to add to the deck once Phyrexia: All Will Be One releases.

I was tickled to dust off my old-school The Dark copy of Maze of Ith for this deck; all Ashnod needs to do is attack to get the trigger, so if there is no opponent that I can safely attack, Maze of Ith has my back. Also, since Ashnod is providing ramp of sorts with the Powerstones, I don’t usually miss the mana lost by having to use my land drop for a land that doesn’t produce mana.

Agent of the Shadow Thieves is another fantastic way to keep Ashnod attacking; it doesn’t usually matter whom I want to attack with my small commander, as I just want the trigger to make more Powerstones, so being forced to attack the life total leader is perfectly fine.  Darksteel Plate also provides indestructible, but not limited to just my attack step.

The first strike given from Sword of Vengeance and Power Matrix makes blocking Ashnod with deathtouch particularly difficult, so hopefully they will help keep the attacks going.  Both are also artifacts, so they can be cast with Powerstones and the equip cost can be paid with Powerstones.  Sword of Hearth and Home is another artifact that will help with ramping our Swamps, and the protection ability should help push Ashnod past someone’s blockers in combat.

Here’s the meat of the deck, all the creatures that come back from the graveyard on their own! The new Claw Revenant is perfect here, since all but one black mana between its casting cost and ability can be paid for with Powerstone mana. Bloodsoaked Champion is sweet because the raid ability fits perfectly for a commander that’ll be attacking each turn. Of course, the best one for my money is Reassembling Skeleton, which just comes back from the graveyard whenever you pay the two mana. I’m also rather fond of Death Tyrant for later in the game; the recursive ability is rather expensive but easily paid for with enough Powerstones available, and its Negative Energy Cone should net a steady stream of 2/2 Zombie tokens.

I’ve got a couple of other ways to create creature tokens, which can fuel Ashnod’s attack trigger without depending on the graveyard (for instance, someone has a Soul-Guide Lantern hanging over your head). Tormod, the Desecrator and Open the Graves give you Zombie tokens on both sides of a recursive creature dying and coming back from the graveyard.

Cranial Plating makes any sort of small creature – such as Ashnod – into quite a threat with the ever-growing stash of Powerstones. The attack trigger from Armix, Filigree Thrasher becomes a potent source of creature removal as the Powerstones multiply. Cryptek is here to bring back any artifact creatures I have that might die, either on purpose or accidentally. And how sweet to include the new Powerstone cards Wreck Hunter and Terisiare’s Devastation from The Brothers’ War Commander decks!

The early Powerstone work I do with Ashnod pays off with casting big artifact boom-booms early, like Wurmcoil Engine and Cityscape Leveler.  At nine mana, Portal to Phyrexia is a bit pricey for most decks to manage, but it should be quite viable here.  Noxious Gearhulk is a fantastic removal spell, and since it’s an artifact, you can pay up to four of its generic mana cost with Powerstones.

Since I’m sacrificing creatures to Ashnod, it makes sense that I want cards that reward me for creatures dying, like Grim Haruspex and Midnight Reaper drawing cards. Weatherlight Compleated can rack up the phyresis counters pretty reliably, letting me scry along the way before I start drawing cards. Pawn of Ulamog makes Eldrazi Spawn tokens that can either be sacrificed to Ashnod or sacrificed to make colorless mana.

Smothering Abomination supplies some extra card drawing while also taking to the air for a flying attacker. Shadows of the Past provides incremental value with the scry trigger, but later in the game, its activated ability can fuel up with Powerstone tokens to take chunks of life from my opponents while giving me life.

I looked around for other activated abilities I could use the Powerstones to fuel.  Artifacts like Batterskull and Steel Hellkite are perfect for this, and Withered Wretch can chew through graveyards with enough extra mana. Rogue’s Passage is a bit pricey to activate normally, and so is Arch of Orazca—and I love that the Powerstones I’m accumulating can help unlock the city’s blessing that much sooner.

I’m including a goodly amount of card draw to keep my hand flush with cards. With the ramp potential of the Powerstones, I want to ensure I have plenty of cards to convert that mana into action. I’ve long been a fan of Tome of Legends for aggressive commanders, and I can’t imagine one better-suited to wracking up page counters and having the mana to activate it than Ashnod.

Here are more removal spells that any black deck should consider running, especially the color pie-bending Feed the Swarm to deal with a pesky enchantment.  I’m also thrilled with Gruesome Realization, a sweet card from The Brothers’ War that either lets you draw two cards or sweep away your opponents’ creatures with toughness of 1, perfect for knocking those token decks down a peg.  The Mightstone and Weakstone might draw cards, but I suspect I’ll be grateful for its ability to kill a creature with protection from black or something that’s indestructible.

Lastly, there’s Scuttlemutt, a card I like to squeeze into some mono-color decks to help defend against cards like Sword of Feast and Famine that might otherwise be difficult to deal with.  Tap it to turn one of my black creatures into a blue creature and voilà, no problem!  Plus, along the way it can always tap for mana, or in a pinch sacrifice itself to Ashnod.

What must-have cards might I have missed including in this deck?  Are there any cool new cards from Phyrexia: All Will Be One that I should consider?