We started testing our ideas with the knowledge that Bant Company would almost certainly be the most-played deck in the tournament. I began with G/B Delirium, the deck we tuned to be the deck we ended up playing at the Pro Tour. Others began to brainstorm ways to beat Bant Company. One idea that came up was that Pyromancer’s Goggles decks seemed to have a good matchup against Bant Company in the past, so we began exploring this option.

The Pyromancer’s Goggles deck with the most potential was something close to as follows:

We noticed a couple of things in testing. The first was that piling up on cheap red removal spells was a great plan against Bant Company. Keeping the battlefield relatively empty, preserving one’s life total, and finishing the game with a haymaker such as Brisela, Voice of Nightmares or Emrakul, the Promised End was a great recipe for success against Bant Company. The only way most Bant Company decks had to interact with Brisela, Voice of Nightmares was to hit a Reflector Mage off a Collected Company.

As you can see, the initial deck is all over the place. The deck includes the “Angel combo” of Gisela, the Broken Blade and Bruna, the Fading Light as well as Emrakul, the Promised End. Emrakul, the Promised End is usually difficult to cast, but we wanted a copy in the deck to fetch up with Nahiri, the Harbinger to deal a huge chunk of damage and potentially recast after Nahiri, the Harbinger left the battlefield.

One neat interaction that came up occasionally was using Nahiri, the Harbinger to fetch up a Pyromancer’s Goggles to start going to work with the red spells. Thalia’s Lancers is also able to find Pyromancer’s Goggles, but generally you just wanted to find one half of Brisela, Voice of Nightmares.

In testing the deck played much like a control deck and would usually close the game by melding Brisela, Voice of Nightmares. We did realize while playing this deck, however, that we’d occasionally just cast Emrakul, the Promised End for eight or nine mana and win the game that way. I think this may have been the start of trying Emrakul, the Promised End as an eight-mana win condition in our G/B Delirium deck that was aiming to be a little more aggressive at the time with Mindwrack Demon.

This deck didn’t even make it to the phase of playing sideboarded games, though we did play a lot of Game 1s with this deck. That means we never really developed a sideboard for this deck, but I think if I were to build a sideboard, I’d try to put the Brisela, Voice of Nightmares package into the sideboard and try to build a traditional Pyromancer’s Goggles deck that also included Nahiri, the Harbinger to fetch out Emrakul, the Promised End.

Here’s what I’d try if I were still testing this deck:

I think Emrakul, the Promised End decks will be a huge problem for this deck, so I wouldn’t recommend it for a major tournament without some serious testing. It’s possible having only Pyromancer’s Goggles and Emrakul, the Promised End as targets to fetch up with Nahiri, the Harbinger is a mistake, so you could either put the “Angel combo” back into the deck or play a single copy of Bedlam Reveler as a reasonable card in the deck that could also be tutored up with Nahiri, the Harbinger.

That we learned how good Emrakul, the Promised End was in general and that Brisela, Voice of Nightmares was a good thing to be working towards against Bant Company goes to show how valuable testing decks can be, even if you don’t end up playing the deck you’re testing. Finding the power of Emrakul, the Promised End was crucial to our success at the Pro Tour, and without testing this deck, it may have never happened. Even if a deck you test isn’t the deck you play, it can still lead to success in other ways. In fact, if anything we should have gone a little deeper with Emrakul, the Promised End after realizing how powerful it was in this deck, a deck we never gave much consideration.

The next deck I want to talk about is a deck my team was very close to playing, and the one member of our team who did not play G/B Delirium at the Pro Tour played this deck. Here’s the build Ondrej Strasky took to a 13th-place finish:

When I say we came very close to playing this deck, I mean it. Every single member of our team ordered a copy of this deck about a week before the Pro Tour. I myself was very excited about this deck for a few reasons.

It did a lot of what I want in the early weeks of a new format. First of all, it’s proactive. Proactive strategies are where you want to be at the beginning of a format because it’s extremely easy to punish decks that are untuned and not ready for the threats you are presenting. This Zombies deck got to attack from a few angles, which is always a plus. Liliana, the Last Hope was great as a threat to ultimate as well as a value card to find us creatures, while also potentially milling cards like Haunted Dead and Prized Amalgam. 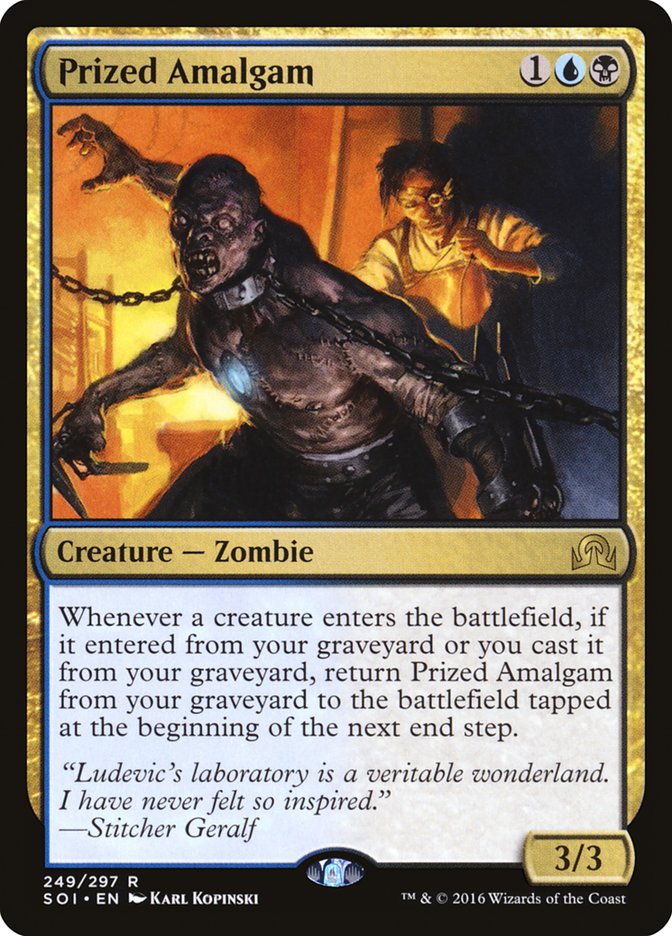 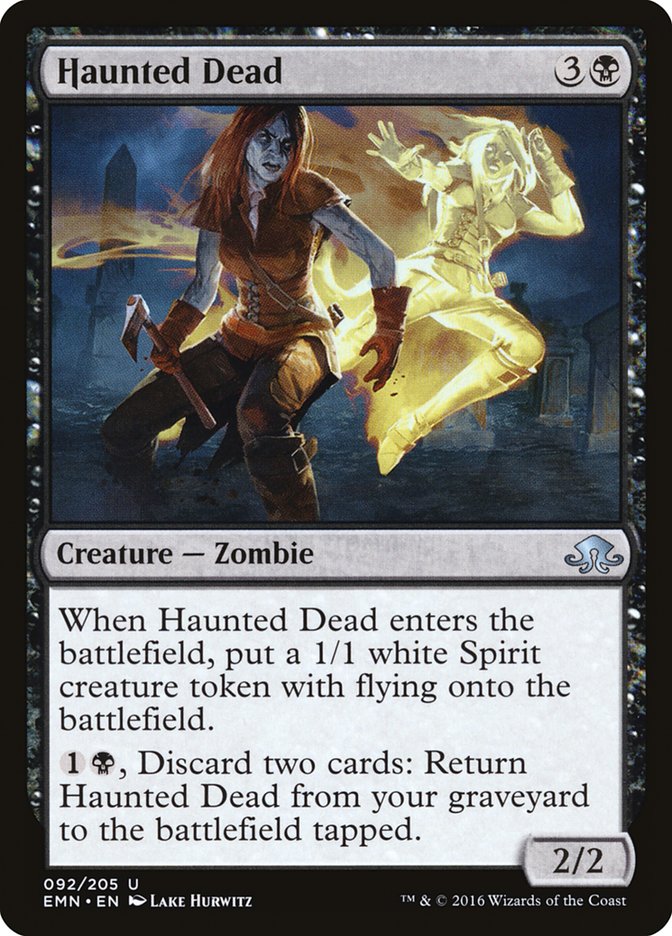 In aggressive decks, I also look for resilient threats. Haunted Dead and Prized Amalgam give us the ability to bring creatures back from the graveyard and also allow us to do this on our opponent’s turn to avoid sweepers. (Be aware that you have to use Haunted Dead in your opponent’s second main phase if you want to bring back the Prized Amalgams that turn as well. If you bring back Haunted Dead in the opponent’s end step, you will have to wait until your end step to bring back the Prized Amalgams, missing out on an attack phase with them on the battlefield.) Resilient threats like these make the deck less vulnerable to sweepers, allowing you to win a slightly longer game than a typical deck that’s trying to swarm the battlefield. 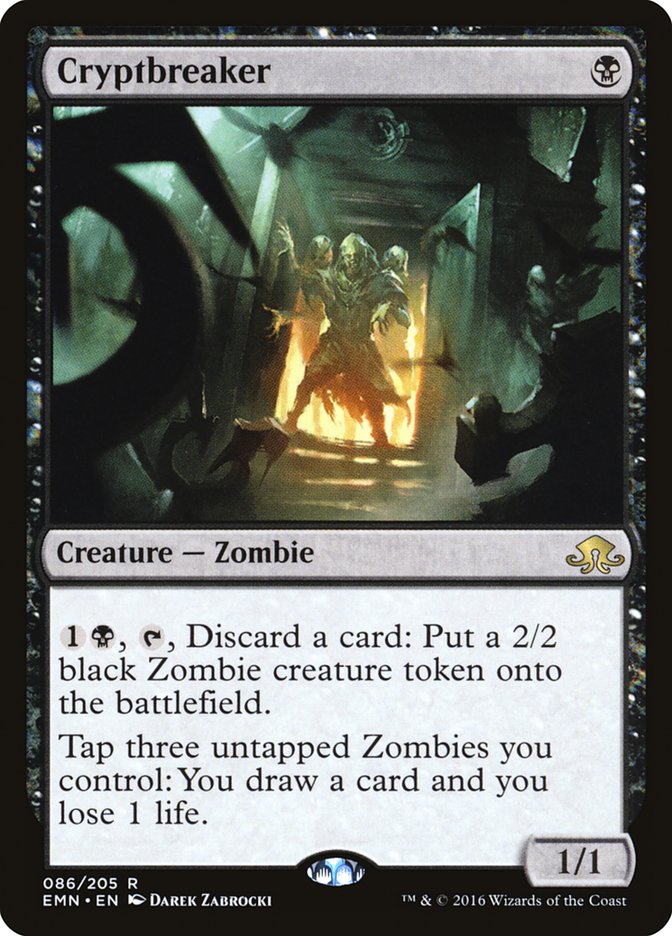 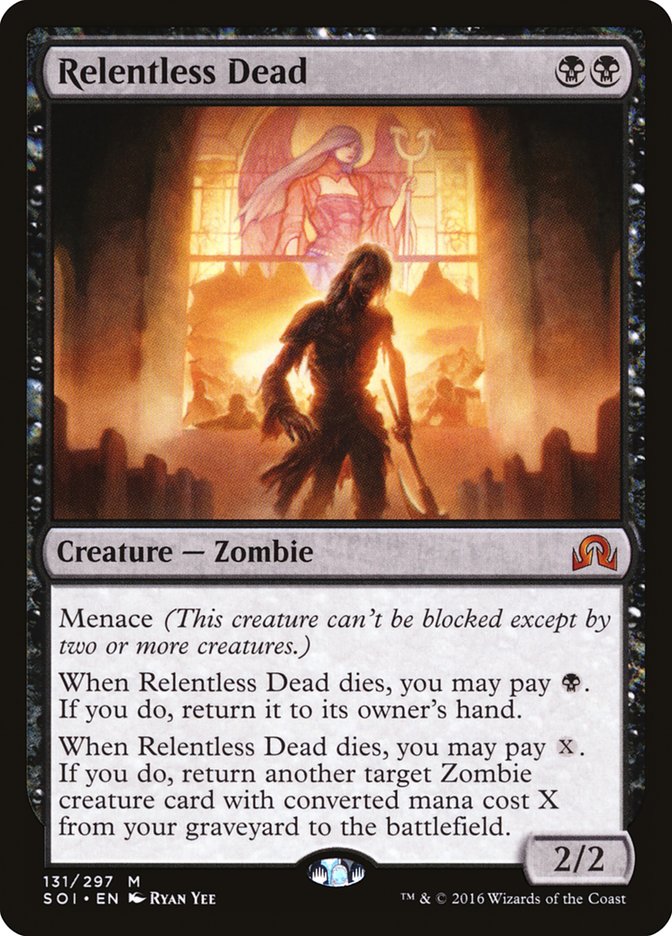 One card that I don’t see in too many of the Zombies decks I’ve seen that fits into this resilient threat category is Relentless Dead. Relentless Dead was one of the major reasons I loved this deck. Relentless Dead as an attacking creature was fine as a two-drop that could pressure planeswalkers, but it was more of a nightmare to attack into.

As the game progressed and there was more creatures in the graveyard, including Prized Amalgams and Cryptbreakers, it became nearly impossible to attack into Relentless Dead with ground creatures. An attack with a pair of Sylvan Advocates would usually lead to the Zombies player taking four damage, chump blocking the other Sylvan Advocate, and bringing back a Cryptbreaker from the graveyard to the battlefield with the Relentless Dead going right back to the Zombies player’s hand.

This sequence would bring back a Prized Amalgam or two in the process and create an overwhelming battlefield presence. Cryptbreaker would slowly take over the game, drawing tons of cards in these prolonged games giving the deck a pretty good late-game.

Relentless Dead was also impressive alongside the best card in the deck, Voldaren Pariah. I was wrong about this card. Initially on seeing Voldaren Pariah, I was extremely unimpressed. A five-mana 3/3 flyer with an ability you have to sacrifice three creatures to lines up extremely poorly against most removal. However, alongside both Haunted Dead and Relentless Dead, Voldaren Pariah would often flip at little cost and it was pretty easy to sneak Voldaren Pariah onto the battlefield at instant speed with madness against a tapped-out opponent thanks to Jace, Vryn’s Prodigy; Cryptbreaker; and Haunted Dead.

Relentless Dead also made the deck somewhat resilient to sweepers. Casting a Languish into a Cryptbreaker, a Prized Amalgam, and a Relentless Dead would oftentimes be the same as simply casting a main-phase Unsummon on Relentless Dead.

Voldaren Pariah was responsible for yet another reason I love playing decks like this early in a Standard format. This deck was incredibly difficult to play against. I can’t even explain how many times I “misplayed” against this deck because I didn’t know many of the cards in it. After a while in testing, you get to know the deck and the interactions, but at the tournament itself your opponents don’t have that luxury. You can be pretty confident that your opponents will play about as well as you did against a deck the first couple of times you did when you were testing, and with this Zombies deck, let’s just say things got a little messy.

Voldaren Pariah was incredibly difficult to play against at instant speed alongside Haunted Dead. A lone Jace, Vryn’s Prodigy could discard a Haunted Dead, which then would be brought back to the battlefield while discarding a Voldaren Pariah to madness and then sacrificing the Haunted Dead, the Spirit token, and the Jace, Vryn’s Prodigy, making the opponent sacrifice their entire battlefield of creatures. Sequences like these made the deck incredibly difficult to play optimally with and against. If a deck is difficult to play against, it can sometimes lead to free wins, which are definitely wins I’m willing to take.

Why did we ultimately abandon a deck that seems so promising? Well, the short answer is the deck proved to be really bad against decks with Languish and Liliana, the Last Hope. Cryptbreaker is a big part of why the deck is great, and Liliana, the Last Hope taking Cryptbreaker offline for free was a huge problem. Languish was weak on some battlefield states because of Relentless Dead but was usually good enough to make the game extremely difficult to win from the Zombies side.

Now, we didn’t predict a metagame full of Languish and Liliana, the Last Hope decks, but we knew that since G/B Delirium was also in contention for us, it would likely be on the radar for other players, making it difficult to pull the trigger on Zombies since it was quite weak to decks with a bunch of maindeck Languish. After speaking to Ondrej about the deck, he thinks with an uptick in popularity and success of Bant Company like we saw this weekend at the Grand Prix in Portland and Rimini, the Zombies deck could have some legs again. I would advise adding two or three Transgress the Mind to the maindeck if you wanted to give it a try to combat the popularity of the Emrakul, the Promised End decks.

These two decks were the decks I enjoyed playing with and against the most in testing other than G/B Delirium, which I ended up playing at the Pro Tour. I think it’s valuable to go back and look at decks that were close to being viable in case the time is right to bring them off the bench. I don’t think I’d be gutsy enough to play the Pyromancer’s Goggles deck in a tournament, but I think the Zombies deck had a lot of powerful things going on and was extremely well-positioned against Bant Company. Maybe it’s time to bring Zombies back from the dead?