Day 2 could have started better. I made a somewhat risky draft pick early, got into the archetype I wanted — it was open — and then my deck ended up missing some key pieces. My U/B splashing white ascend deck could have used a big bomb, some flying defense, and some Desperate Castaways in Pack 3.

I won my first round against an aggressive U/R deck, but ran afoul of Pascal Vieren’s W/B Vampire deck. He was mana-screwed the first game, I flooded the second, and our third game was maybe the craziest of the tournament for me. At one point, we had both drawn fourteen spells and six land and continued to topdeck each other.

My luck ran out and I died to a 2/3 flier from thirteen life.

Round 3, I got beat up by Carlos Romao’s U/R aggro deck, mostly due to his fliers and my flooding out.

Still, being live for Top 8 once the draft rounds are over is never something I’ll complain about, so I soldiered on, assuming my tournament was about to crash like in Dublin.

Oddly, it didn’t. After doing some quick maths, I drew into Top 8 with Ken Yukihiro and maintained my undefeated streak in Modern. Pro Tour Top 8 #3!

One of the things I’ve wanted to start doing is test for my Top 8s. There’s literal tons of equity on the line and you don’t get those chances very often. However, it’s Modern. You don’t test matchups. You do, however, accept prize splits when offered.

I’ve known Javier Dominguez since Gadiel’s first Top 8 at Pro Tour Columbus in 2004 where he unleashed Cephalid Breakfast on the world. Recently, he’s re-dedicated himself to Magic and has been crushing it, which makes me really happy. Playing a friend in Top 8 can be bittersweet, but especially for Javi after a pair of ninth-place finishes, I was happy to see him there.

Maybe I was supposed to win Game 1? Whatever, it was early and I was waking up. Shake it off. 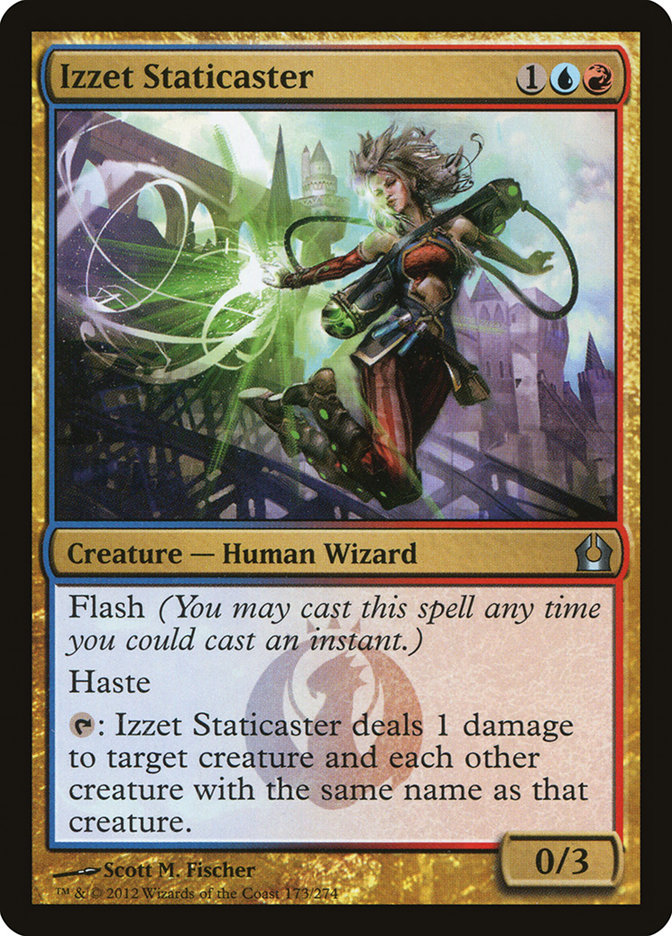 The Izzet Staticaster block in Game 3 was the most interesting part of the match. It was going to start mowing down my tokens and my engine stuttered so I was just living off the top of the deck. My draw step for the turn was a Collective Brutality, so it meant I needed the Izzet Staticaster to block one of the Elementals.

I attacked with five Elemental tokens, which prompted the Izzet Staticaster block. In that moment, Javi Doms became Javi Dobs.

Reverse sweeps are gas. I skipped testing my Top 8 match, not just because I assumed I was going to win, but also because I knew what I was doing there. Pascal Vieren presumably played his deck because it had a good Humans matchup, so I expected a victory over Andrea. If Andrea won, then I’d have another Humans matchup I didn’t need to test for.

Anyway, my matchup against U/R Pyromancer felt favorable, but it was all a matter of drawing Ancestral Vision, or whether or not Pascal knew he was supposed to fight me like a Fish deck. When those draws came up, he played them correctly, but I was fortunate in that I wasn’t often under pressure.

Our games were awesome and I highly recommend watching them. Completing the reverse sweep is one of the best feelings imaginable.

The other side of the bracket was wild. I thought if Reid could get through Ken, we’d probably meet in the finals. Still, anything could happen, so I didn’t prepare very much.

In the end, it was me against my worst matchup in Top 8, Lantern. Luis quickly locked me out in three games, and that was that. Overall, kind of anti-climactic, but I tried to put on a show.

Losing in the finals is supposed to be this huge letdown, but I didn’t expect to make it that far in the first place. Everyone was saying “congratulations and condolences,” but there were no condolences necessary, at least as far as the tournament was concerned. The result was a good one and nothing to complain about.

I honestly thought I was going to win. The matchup and the deck didn’t really cooperate with me, though.

Ever since Gadiel Szleifer passed away, I’ve carried a Taking Back Sunday wristband with me to every tournament. I couldn’t find the shirt Gadiel wore at Pro Tour Philadelphia, but the wristband seemed better to me anyway. I have sponsors to rep and the wristband isn’t in your face. While I didn’t win, I did put on a show, and that makes me happy. It was my friends who helped carry me.

Always the optimist, I booked my original flight to return Sunday morning. I had to rebook, and then I overslept and had to rebook again, which wasn’t easy or cheap.

I ended up sitting in the airport, hanging out with some other Magic players, some of which also had flight issues. We played some Pai Gow Magic and showed each other pictures of cats to pass the time. Some discussion of the tournament happened and my finish was mentioned. A lady sitting at the next table over looked up the coverage, confirmed that I got second, and asked to take a picture with me. Her son also played the Pro Tour and thought he would enjoy it.

Later, her son showed up and it was my Round 3 opponent! He congratulated me and gave me his Chinese foil City’s Blessing token! People are awesome.

Rebooking on a good flight wasn’t possible for less than $3,000, so I didn’t end up leaving Spain until Wednesday morning. It wasn’t the worst thing, though. I caught up on some sleep, spent some time alone with my thoughts, and figured out my plan for the coming weeks.

Two Top 8s in Less Than a Year?

What is this, I don’t even.

Coming back from my Wizards internship certainly ignited a change in me, but I never thought I’d reap the rewards so quickly. Still, I did my damndest to fix my mistakes, and while several are still there, I’m doing better at mitigating the damage they do.

All this just goes to show that your most feared opponent should be #modoguy. Similarly to #marduguy (I’ll be using #mardulife from now on, by the way), #modoguy is the entire Magic Online community personified into a single essence. They’re always right and you should trust them. Someone wielding the Magic Online darling, like Mono-Black Zombies, Mono-Red Aggro, or even Mardu Pyromancer should be feared.

Look, I don’t know what to do with my hair, okay? 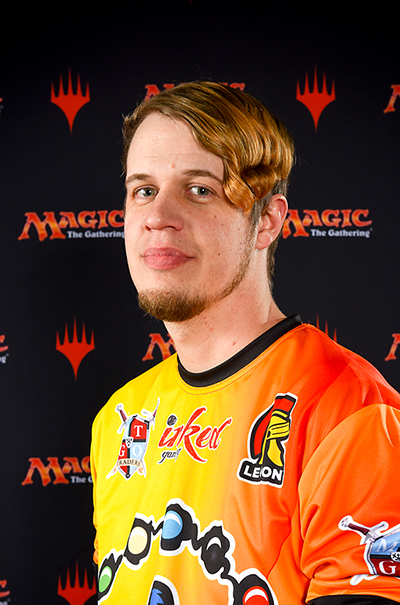 Outside of my high school days, I’ve basically always kept my hair short and spiky. Eventually that turned into short because I was too lazy to spike it every day (and generally stopped caring about my appearance past looking presentable). I also like to wear hats, so spiking it is kinda pointless anyway. Since then, I’ve kept it short sometimes, grown it out a few times, and right before Pro Tour Amonkhet, I got a haircut that I certainly didn’t ask for.

But I kept it.

Then I dyed my hair, because why not. I like how it looks, I appreciate a change, and people seem to love talking about it. At the end of the day, why would you really try to please anyone with your looks but yourself?

My hair curls when it gets long and I have a million cowlicks, and I’m basically resigned to having mostly crappy hair for the rest of my life. If that’s the case, I’m going to do fun stuff with it, appearance be damned.

It’s a damn shame that when someone tries something new, they immediately get “you look hideous, go back to what you were doing before” instead of “I think you should try this, but it’s cool that you’re trying new things.” Like, why do people care? It’s the same as bringing up a mistake someone made to make them feel bad or stupid. It’s just a shitty thing to do. Judging someone on their appearance says more about the critic than the subject.

I’m a face of Magic and I’d like to stay presentable, so maybe that will have to change at some point. You may see clean cut, well-dressed Gerry at some point, but likely not within the near future.

Look out for my mohawk at Grand Prix Phoenix in a couple of months.

Side note: Something I’ll never forget is when I was growing my hair out, just to kinda see what it would look like. It was sort of this big mess ball, but I had my girlfriend at the time straighten it. I looked like I was in an emo band. The first thing I thought to do was send that picture to Korey, and it absolutely delighted him.

To this day it’s my welcome photo on my computer.

With how my season was going so far, I needed to pick up an extra ten points for Gold. Now I need a paltry four to hit Platinum again. I didn’t get the easy invite to the World Championship by winning the Pro Tour, so maybe that’s a thing to fight for.

This finish also puts me a step closer to the Hall of Fame, but my overall stats are still very poor compared to everyone else’s. Some people said they’re going to vote for me, but I still think I’m a huge dog. At least I’m one step closer.

Despite all the good stuff that happened this weekend, Korey’s passing makes it difficult to be happy. By comparison, losing a loved one is far more important than some silly tournament and it makes it nearly impossible to feel like I accomplished something of meaning.

A few weeks ago, I wrote an article about my lack of motivation, and I had that in spades this weekend. After Round 3, I fought harder than in recent memory, just the way Korey would have and the way he would have wanted me to.

I played the finals of a Pro Tour with an emo haircut, constantly brushing the hair out of my eyes, drawing cards and killing creatures, the exact way Korey would have.

As the otter would say, “Sup?”