What an exciting prerelease! 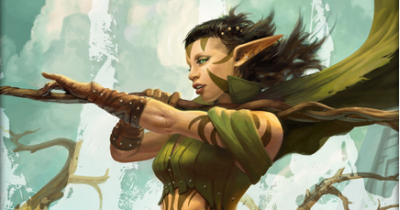 More than any Core Set Prerelease in the past, I had a genuinely enjoyable experience, from planning, selection, building, and playing.  Although I’m excited about M15 from a Constructed perspective, this weekend proved to me that it’s no slouch in the Limited department.  Win or lose, it’s a good experience if you’ve got an open mind and a sportsmanlike demeanor.

Prereleases have become almost ritualistic for me; I bring some calm, gentle music if it’s in the morning, or I bring some rockin’ music if it’s during the afternoon.  Everyone has their own pre-game rituals, but because Prereleases are the tournaments I attend most frequently, mine has set in pretty well.  This Prerelease and its ritual began with a hustle; after a cat-related fiasco at home, I got out the door later than expected but got there with just enough time to pay and wait my turn.

I had signed up early, so I had the pick of the litter, but instead of going with green, I audibled. 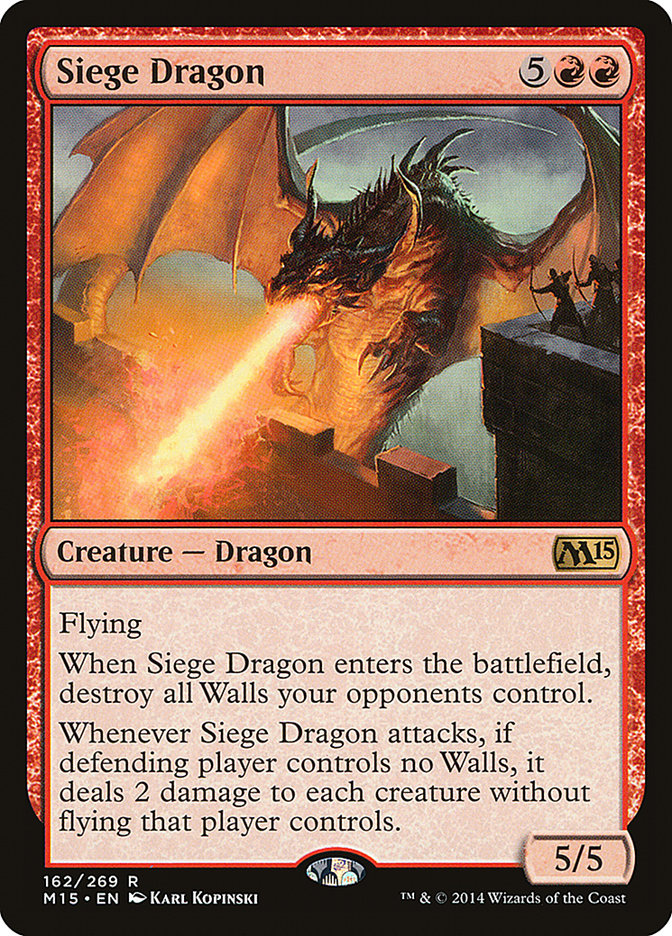 First, I’ll say that I’m not immune to the community, nor should anyone be.  After reading several different reviews about the merit of each color and its advantages and disadvantages, I decided to change to red, citing the power of the rare and the high potential in the removal suite.

Because I didn’t take my time, I was surprised by the speed and efficiency with which we were seated for building, and I cracked packs just a few minutes after arriving.  Here’s what I opened:

1 Geist of the Moors

1 Seraph of the Masses

1 Nimbus of the Isles

1 Feast on the Fallen

1 Staff of the Flame Magus

1 Staff of the Death Magus

1 Staff of the Mind Magus

From there, I look at the base of each color and cut one of them.  Without so much as an uncommon, blue hit the bin very quickly.  Only three or four cards were even playable, and none were worth a splash.  White also lacked a rare, but I rationalized that some of the cards weren’t terrible.  Green, despite its busted rares, had very little in the way of on-curve creatures.  Furthermore, each rare was heavily green, either requiring three sources or the pinning down of a green source each turn.  Despite their power, I wanted to favor consistency and I painfully set green aside as well, favoring white’s spells and flying.

I tried to build a red deck first and, despite some relatively solid splashed, I actually had sufficient playables and potentially explosive starts that I didn’t add a second color at all.  I built this first:

Replacing Act of Impulse with two 4/4s and a semi-Equipment seemed like all I needed to do; more than any other Prerelease deck, this list built itself.


Because I had sufficient time, I built a second deck, hoping to leverage the strong black rares with the on-curve help of white’s creatures to flesh out the critter-light black pool.

Black and white’s pools seemed ideal for the long-end, value-oriented game with a couple recursion spells and Liliana Vess on top.

Naturally, I led off in round 1 with my mean red list.

Walty was an exceptionally happy individual, ready to play after a lengthy hiatus.  He was excited just to sling some cards, and he had some great spells to help him do that.

An aggressive start for me in game 1 put him fairly low, and my unblockable Krenko’s Enforcer and friends were smashing for six a turn.  I had my burn spells on time and, except for a double Titanic Growth on a Carrion Crow, he dealt little damage to me in game 1.

Game 2, however, was much closer.  A slower start for me meant he was getting in the red zone early with his Invasive Species and Witch’s Familiar, before long I was at 4, but he had a couple flyers that were ready to end the game.  Brood Keeper pulled its wait, giving me two or three Dragons off serendipitous draws to block and trade with his Indulgent Tormentor.  He quickly reanimated his Tormentor, and I felt like I was done for.  With just one Dragon left and two flyers to block, the game felt lost.  When he brought it in for lethal, I blocked his Carrion Crows and let his five-power flyer through, and out came the Giant Growth on the Demon for lethal.  Thankfully, a Lightning Strike met his Demon in the air, and it came crashing down, letting me smash back with a couple Will-Forged Golems for the match.

As I realized I was facing down another Golgari deck, I ruminated on my deckbuilding.  Maybe these folks were on to something.

Charlie was another friendly face, but my smile turned to a frown when he resolved Hornet Nest.  I resolved Goblin Rabblemaster a turn later, knowing full well he could chump block my 1/1s and get flying removal spells in return, but I felt I had to put on some pressure to overwhelm him.  It soon became clear, however, that after he traded off his Nest for insects, I couldn’t race his much more powerful creatures.

For game 2, I switched to my defensive deck, hoping to get around him with value, and it worked.  Liliana came down early, and before long, she was in ultimate range and we moved to game 3.

I kept a slow hand and he kept a fast one game 3.  After he blew out my only blocker with a Ranger’s Guile, I didn’t resolve anything until Liliana, who went to find Covenant of Bonds, my best removal spell.  That is, besides In Garruk’s Wake, which was floundering in my hand due to its roughly infinite mana cost.  It was a turn too late, and once he saw that a full-out swing at me was lethal, I picked up my cards.

I felt bad about losing this one thanks to the rough keep, but it was my choice.  Charlie played a great game.

Ricky is an old throwback for me.  When I was still in undergrad, Ricky and his son were at every event at my favorite shop, and Ricky helped me cut my teeth for a long career of Magic enjoyment.  While he was quite a serious player back then, he’s more excited to brew and play around these days, and I couldn’t be in a greater accord.

I started the black and white deck this time, convinced there were several cards my red deck could not beat.  He had trouble getting online in game 1, and I had a blistering start for a twelve-creature control deck (the line is admittedly blurred in Sealed), and we went to game 2.  He got a better start, resolving his own Hornet Nest and giving me some trouble getting around him.  I cast Endless Obedience on his Hornet Nest, got two Insects of my own, and they traded off in combat.  I got Seraph of the Masses online and proceeded to flood out.  Thankfully, with a small selections of blockers, it was enough to get the job done.

Alex, a younger guy who I’d seen play in many tournaments, was already an accomplished Magic player in my mind (fairly sure I’d lost to him a couple times before.)  I switched back to the red deck for this one.  In game 1, he assembled the indefatigable duo of Sungrace Pegasus and Spectra Ward.  I picked up the enchantment to read it and, with no enchantment removal or sacrifice ability, nor a flyer to block it, I picked my cards up.

Game 2 brought out the black and white deck.  I got a bit of a lead on him as he drew land after land.  I got him to 7 life, but his Sungrace Pegasus with both a Marked by Honor and a Spectra Ward came just moments after I first felt that victory was within reach.  7 life, then 12 life, then 17, then a dead Matt.

Going X-2 in our Prereleases generally puts you out of the running prize-wise, so I decided to desleeve and head home, hoping to get to sleep before the sun rose.   I might have left the shop without a prize, but I had a lot of fun.  And hey, Chord of Calling and Liliana Vess aren’t bad consolation prizes.

In retrospect, I’m fairly certain my red deck, while very consistent, had several problems with it that put it out of reach for a competitive sealed deck.  Mono-red aggro can only get there sometimes, and without any draw or value generation, I was relying on a really strong seven to get the job done.  The black and white deck was still surprisingly light on removal; Oppressive Rays and Crippling Blight are only removal for an aggro deck.  Unmake the Graves and Covenant of Blood were still very powerful cards, and Liliana was still a Mack truck in Sealed.

I found it interesting that all night, I never saw an Island; combining mediocre creature support with a very bad seeded rare, blue was not the color of the evening.  I loved mono-blue in M14 Draft, but I think it might take the higher power level and selection potential of Draft for us to know for sure.

If I’d done it again, I might have gone Golgari myself, relying on a potentially faster and more powerful spell suite while sacrificing early consistency.  I still feel like white wasn’t bad, and several cards in that list proved to be valuable allies, e.g. Geist of the Moors and Seraph of the Masses, but it’s possible that green, with its ramp and power potential, might have edged it out in an alternate universe.

If you were given this pool, how would you build it?  Did your Prerelease have any crazy plays or pulls?  There’s always that lucky duck with the ol’ triple planeswalker pool!

I can’t wait to get going with some M15 brews; my only fear is that Khans of Tarkir will come around before I have the chance to share them all with you!