The big problem with Splinterfright is its dependence on having a certain density of creatures in your deck along with sufficient graveyard enablers. In order to actually get it online, you need to be able to mill yourself quickly, and you need to have a high probability of hitting creatures when you do. That makes finding the right balance very, very difficult.

For that reason, most of my Splinterfright decks have been G/U in order to utilize cards like Screeching Skaab and Armored Skaab. While they’re not the most impressive creatures on their own, they’re important cogs in the machine because they’re both self-milling enablers as well as creatures you can flip when you’re milling yourself.

Another important card for the self-mill plan is Tracker’s Instincts. Much like the Skaab brothers, Tracker’s Instinct is an excellent card both to mill yourself with and to flip while you’re milling. With relatively low-impact enablers in your deck, it’s important to be able to reload on action, and Instincts is the best tool around to do it.

If I were to try to bring a Splinterfright deck to a tournament today, it might look something like this:

In some of my earliest Splinterfright decks, I was experimenting with Dungeon Geists as a pseudo-removal spell that was still a creature to power up my graveyard shenanigans. Tidebinder Mage is a much cheaper version of Dungeon Geists against virtually all of the creatures you’ll face in Standard. It locks down Olivia Voldaren, Thragtusk, Thundermaw, Hellrider, Flinthoof Boar, etc., etc.—all for the low cost of two mana! It’s a great tempo play when you’re trying to push through damage with big non-tramplers like Ghoultree and Boneyard Wurm. A perfect addition to the deck.

The problem is that the rest of the world has an even better addition against you. The thing that kept me away from playing Splinterfright time and again was the splash damage it suffered from cards people had against other graveyard strategies. Nihil Spellbomb and Rest in Peace were absolutely devastating, and Scavenging Ooze is not much better for you. As a deck that relies on getting critical mass of creatures in the yard and utilizing flashback spells, you’re in a pretty terrible position when the most popular decks in the field are all maindecking a bunch of Oozes. You do have the option of sideboarding Ground Seal, as I have here, which is amusingly protection for your graveyard rather than protection against your opponent’s graveyard tricks, but it’s nice to kill two birds with one stone.

Largely because of Ooze, I don’t think this deck is in a great position to win a tournament, but it’s certainly a hell of a lot of fun to play. There’s nothing quite like filling up the board with enormous creatures and just ripping through your deck to make them bigger and dig for more.

Outside of Splinterfright, there are a few more cards from Innistrad block that got my creative juices flowing when they first hit the scene but haven’t really panned out—even ones that don’t get ruined by graveyard hate! One of those cards is Cloudshift. One thing that I noticed when I was looking at the Avacyn Restored spoiler is that all of the "blink" cards in the set have different templating than in the past. While such effects for a long time were all written "return it to play under its owner’s control," in Avacyn Restored they shifted to say "under your control." That meant that if you could steal an opponent’s creature and then blink it with something like Cloudshift or Restoration Angel, you got to keep it forever. 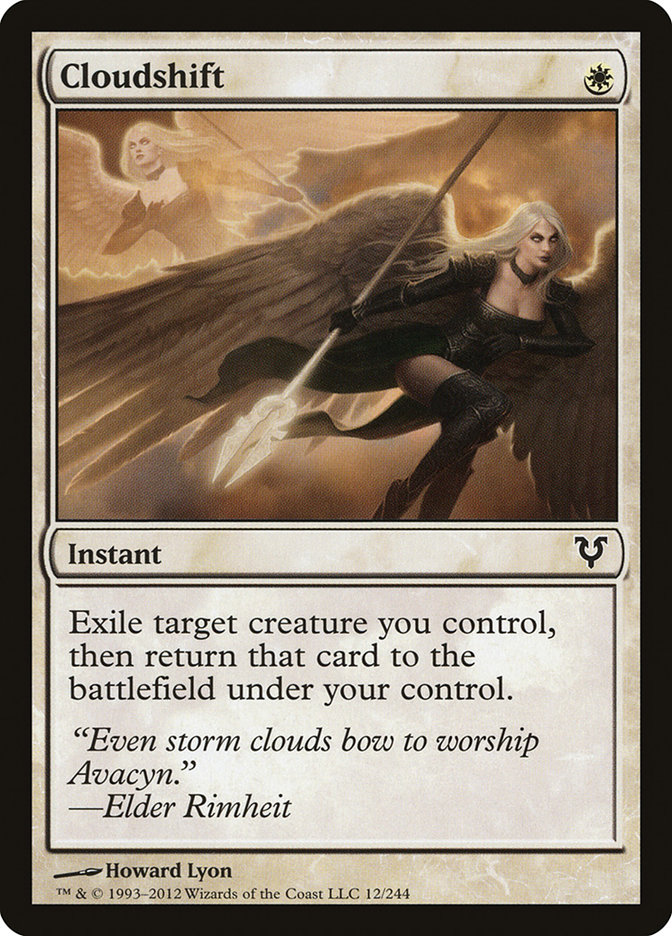 I never really got around to trying to make Cloudshift work when it was in the format with all of the awesome old enters-the-battlefield triggers, mostly because I was busy abusing them with Birthing Pod instead. But what could a deck that is really built to take advantage of Cloudshift look like?

This deck has several angles—it’s an aggressive Boros Humans deck, but it can also leverage Cloudshift and Restoration Angel very effectively. Not only can you use Cloudshift for tricks with Act of Treason and Zealous Conscripts to keep your opponent’s creature forever, but you can exile your opponent’s creatures forever with Fiend Hunter (a technicality that has since been "fixed" with the updated wording on Banisher Priest). You can also get a bunch of extra triggers from Kessig Malcontents or just use the six threaten effects to push through damage, a job that Imposing Sovereign makes that much easier.

Or you can go a Naya route:

This version trades raw aggression for value, with a slew of enters-the-battlefield triggers to go alongside Cloudshift, Restoration Angel, and even Conjuror’s Closet. Left unchecked, this deck can potentially land-lock an opponent in the first few turns of the game. Acidic Slime with Cloudshift and Angel can put your opponent back multiple lands very quickly, and Conjuror’s Closet might as well be Conjuror’s Coffin given how it can simply close the door on their continued existence.

Is Cloudshift likely to be a major player in the last few weeks of the Standard format? Probably not. It’s not facing the same uphill battle as poor Splinterfright, but it doesn’t have the raw power of a deck like G/R Aggro or Jund either. That said, the card is certainly capable of doing some sweet stuff, and it would be a shame if it rotated out before you had a chance to try it. 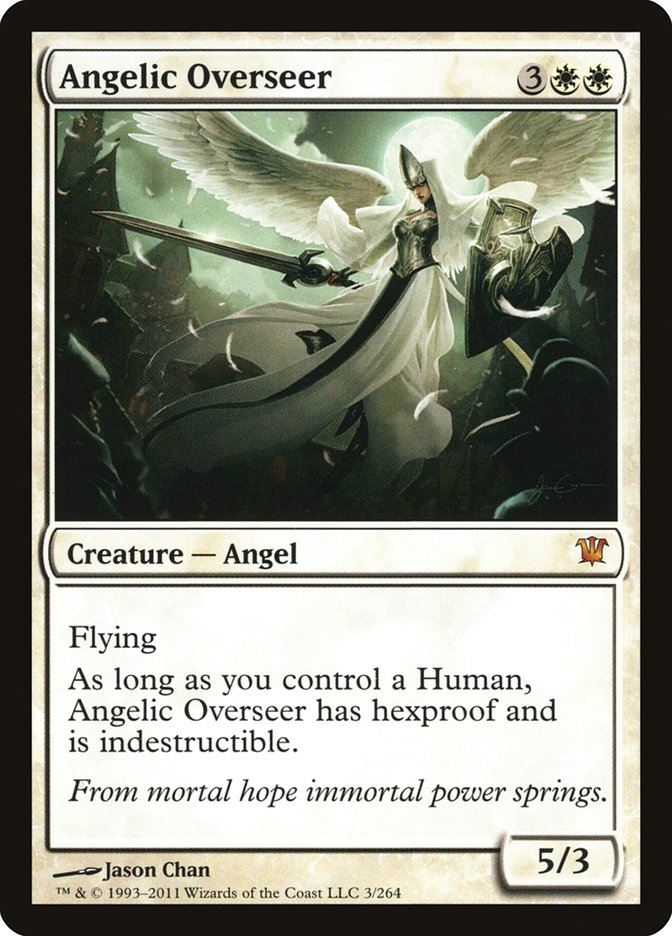 Last but certainly not least on my list is Angelic Overseer. Overseer isn’t in quite the same boat as either Splinterfright or Cloudshift. It’s less of a tricky build-around-me kind of card and more of a card that I’m actually downright puzzled hasn’t seen more action. A 5/3 hexproof indestructible flier is no joke, and it certainly isn’t terribly difficult to find quality Humans these days. In fact, Angelic Overseer fits right into the kind of deck I think might be fairly well positioned in the current metagame: W/G Midrange.

Now this deck is one that I actually think may have real potential. The G/W creature base is naturally strong against many of the aggressive decks in the field, with Loxodon Smiter and Fiendslayer Paladin promising to give G/R decks fits, especially with Unflinching Courage coming out of the sideboard. Angelic Overseer offers a hard-to-kill evasive option against controlling decks like Jund and U/W. It’s not guaranteed to be hexproof like Sigarda is, but it can survive Supreme Verdict against U/W, which is something that Sigarda can never do (well, barring something like a Mending Touch).

One change I would definitely try with this deck is the addition of Mutavault since it’s great at helping to protect Angelic Overseer when your other Humans get killed, but I’m somewhat hesitant just based on the way the mana requirements look to be right now. You really want to have a turn one green source, and after that you need double white, so it could be tough to sacrifice colored sources for manlands. I only mention it because of the Overseer synergy.

Given that, maybe you’re better off playing something like this:

A mana base only Craig Wescoe could love! This deck loses a lot of flexibility compared to the G/W one and doesn’t have anywhere near as exciting sideboard options, but it does have the potential to get a lot of value from Mutavault. Angelic Overseer may just never die!

But even an indestructible hexproof Angel has no protection from rotating out of the format. What do you think? Are there any hidden gems that will be uncovered in the final weeks of the Standard format? What cards do you wish could have found a home that just never seemed to work out? Let me know in the comments!