Welcome back to Too Much Information! This time, we’re taking a look at the St. Louis Open. A total of 277 players showed up for the last Legacy Open of the 2011 season. Download the spreadsheet to get the data for each and every one of them. 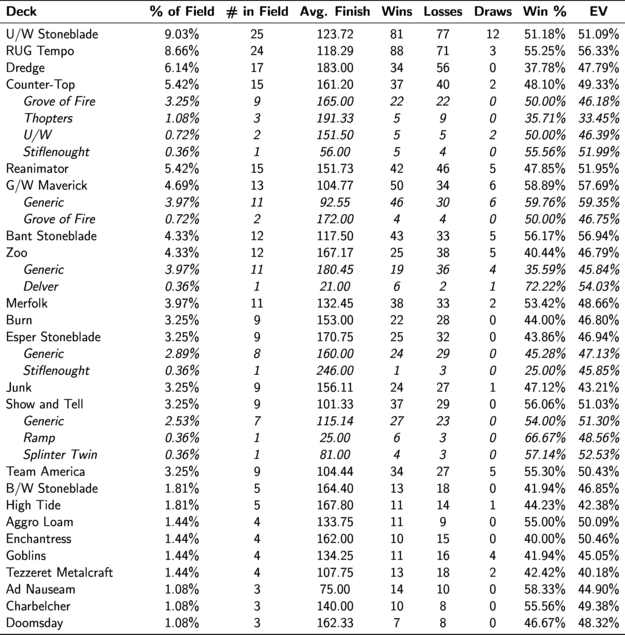 Last time, we saw Merfolk finally fall from the top spot and several other decks fight to take its place as the most popular deck. U/W Stoneblade has been consistently near or at the top since before Innistrad and the banning of Mental Misstep, while RUG Tempo exploded in popularity over the last few tournaments. They seem to be establishing themselves as the new top two, and in St. Louis, U/W had just one more player than RUG. In terms of performance, however, RUG was the clear winner. Its great record here is consistent with its previous showings (actually, this is its worst so far). U/W Stoneblade performed worse than usual but still slightly above even.

Dredge was the third-most common deck in St. Louis. In the long term, its presence is typically a bit less than that, but it was 6.55% of Las Vegas, the previous Open. However, considering its abysmal record, that surge of popularity may not last.

Counter-Top had been extremely unpopular for a long time, but shot up to 5.95% of the field in Vegas. It showed up again in St. Louis, where it didn’t perform very well, though the Grove of Fire build, the most common, managed an even record.

Reanimator started out post-Innistrad Legacy with a string of impressive results, culminating in its domination of the Baltimore Open, where it was 10.08% of the field and won 57.28% of matches. Since then, it seems to have had mixed results, though it still consistently appears among the most popular decks. It did very poorly in Kansas City, very well in Las Vegas, and then poorly again in St. Louis. This may have something do with varying amounts of graveyard hate, but this time, Reanimator had a low EV to match its low win percentage. (Its EVs in the previous five tournaments were all above 55%.) That suggests that its lackluster showing in St. Louis probably had something to do with the decks people were playing, not just how they were building their sideboards.

The best record in St. Louis belonged to G/W Maverick, at 58.89%. This is only the second time we’ve seen Maverick anywhere close to this popularâ€”it was 5.36% of the field in Las Vegas, where it won 53.23% of its matchesâ€”but with a record like that, it will probably be staying.

Bant Stoneblade also did very well. This is consistent with its showings in previous tournaments, though it hasn’t often been this popular, so we haven’t been able to learn much from its numbers before. This is the second tournament in a row where Bant Stoneblade has been about four percent of the field and outperformed most of the more popular decks (all but Maverick, this time).

Zoo, which was a fantastic deck for much of 2011, closes out the season with its worst record all year: a miserable 40.44%.

In the last few months, U/W Stoneforge and RUG Tempo have emerged as the two most popular decks in Legacy. In St. Louis, the former edged out that latter by a single player but couldn’t keep up in terms of win percentage. This is probably attributable to a field that was marginally hostile towards Stoneforge (an EV of 51.09% is much lower than normal for this deck).

Of the five other popular decks, only Reanimator feared U/W in St. Louis. The RUG Tempo matchup, which has historically been a great strength for U/W, looks rather questionable after the two decks split thirteen matches. Perhaps RUG Tempo players have begun better preparing for U/W, either through better-equipped sideboards or simply practicing the matchup.

Dredge has always been a poor matchup for U/W Stoneblade, and this marks the second Open in a row (following Las Vegas) in which Dredge has made up more than six percent of the field, making this weakness quite a liability for U/W.

We don’t have much data concerning the U/W vs. Counter-Top matchup, yet, but as of now it looks like another problem for Stoneblade. We have more data concerning the increasingly-important G/W Maverick matchup, and that deck looks to be as good at trouncing U/W as Dredge is. So, after examining this field, we can understand why U/W Stoneblade’s EVâ€”as well as win percentageâ€”was lower than normal.

RUG Tempo had a much better weekend than did Stoneblade, chalking up another solid win percentage that few of the other popular decks could match. RUG’s matchup breakdown shows us no unfavorable matchups among the popular decks in this event, with the only surprise being the aforementioned U/W matchup.

It is interesting to note that, after winning five out of six matches in St. Louis, RUG is beginning to look favored against G/W Maverick, a deck that has been on a steady rise in popularity on the back of its supposed matchups against the top tier.

As mentioned before, St. Louis was the second Open in a row that Dredge claimed more than six percent of the field, after fluctuating between one and five percent across the events following Misstep’s banning. Unfortunately for those playing the deck, it had a miserable weekend, which can be accounted for by the presence of multiple bad matchups among the popular decks.

RUG Tempo is the most important of these, and Dredge has been unable to stay ahead in this matchup. At least it isn’t as bad as the Reanimator matchup, which is an absolute rout, or the G/W Maverick matchup, which somehow appears to be even worse.

Dredge does boast a comfortably positive matchup against U/W Stoneblade and Counter-Top, but the presence of those other decks makes it look like a poor time to play Ichorids.

Since the banning of Mental Misstep, there have been whispers of Counter-Top returning to dominate the metagame, and it has been slowly gaining in popularity since Calosso Fuentes’ win in Baltimore. The most popular version seems to be Gerry Thompson RUG design that incorporates Punishing Fire and Grove of the Burnwillows.

However, despite a few Top 8s here and there, all versions of Counter-Top have struggled to put up good numbers, and the archetype’s results in St. Louis were particularly disappointing. As could be expected, the matchup numbers are no better, with the only bright spot being a positive record against U/W Stoneblade. RUG Tempo and Reanimator are about even, while Dredge is unfavorable, and what little we know about the G/W Maverick matchup suggests that it may be horrible for Counter-Top.

Across the last five tournaments we analyzed, Reanimator was one of the best-performing decks, so its poor performance in St. Louis is of considerable interest. It may be that this field was more hostile towards it, or towards graveyard-dependent strategies, in general (the latter possibility may be supported by the failure of Dredge, Legacy’s other graveyard-dependent deck).

Reanimator’s matchups in St. Louis weren’t very promising, so perhaps there is more going on than an overabundance of Tormod’s Crypts. Among the other popular decks, Dredge is Reanimator’s only good matchup. RUG Tempo typically enjoys a healthy advantage over Reanimator, although the two decks split in this event. Even that small victory is mitigated by the U/W Stoneblade matchup, which, while traditionally poor, played out even worse for Reanimator than usual in St. Louis.

With it weighing in at a little less than five percent of the metagame, we’ve decided to take a closer look at G/W Maverick because of its exceptional win percentage in a tournament that saw so many more popular decks put up unimpressive results. After remaining determinedly unpopular for several events, Maverick jumped to more than five percent of the field in Las Vegas, but it has been quietly logging strong results since the banning of Misstep.

Taking a look at its matchups, it becomes obvious that the deck may be poised to become even more popular in the future. It doesn’t just have solid matchupsâ€”it has incredibly-lopsided blowouts, and against some of the most important decks in Legacy. In particular, having such a strong advantage over U/W Stoneblade is something few other decks can claim, but being able to roll over Dredge and Counter-Top, while staying ahead of Reanimator, puts Maverick in its own category.

The deck’s Achilles heel, then, must be the RUG Tempo matchup, which is, fittingly, a blowout for the wrong side. With RUG seemingly cemented as one of the two most popular decks, anyone looking to pick up G/W Maverick would do well to test this matchup thoroughly. If anyone can figure out how to improve it for G/W, we would have a frighteningly well-positioned deck. As it is, Maverick was almost certainly the best deck in St. Louis.

Going into Atlanta, it’s safe to expect U/W Stoneblade and RUG Tempo to remain the most popular decks. The presences of Counter-Top, and Reanimator, and especially Dredge are harder to predict, especially after their lackluster results in St. Louis. It’s possible that a better-positioned deckâ€”like Maverickâ€”will become more prevalent as players react to how the metagame is shifting.

Good luck to everyone attending, and join us next time for a look at the Charlotte Invitational weekend, the last tournament of 2011. Happy New Year!

Selesnya is an underrated color pair in Modern Horizons 2 Draft. Ryan Saxe shows how to draft a Selesnya deck that will make Boros and Rakdos opponents fear you.