So where are all the dragons at?

Sure, Stormbreath Dragon and Thunderbreak Regent have teamed up with green’s best accelerators in the very popular G/R aggressive decks, but aside from a
few Draconic Roars, they might as well be flying llamas. While CVM’s recent Open-winning decklist went a bit bigger and included the Gruul Dragonlord, very
few other decks have openly embraced the Dragon synergies from Dragons of Tarkir. 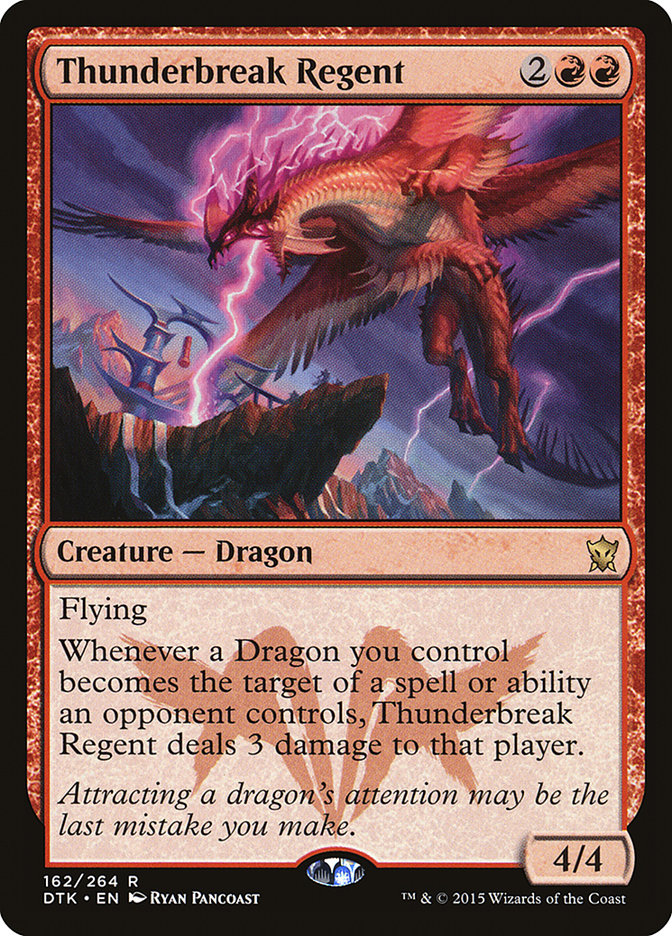 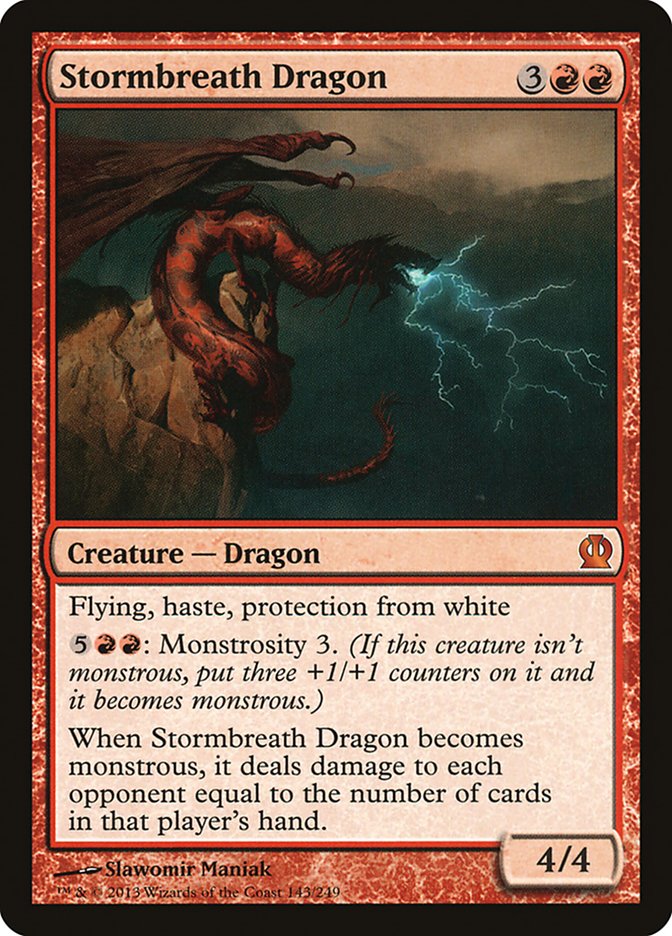 Stormbreath Dragon and Thunderbreak Regent are definitely the best Dragon duo in Standard, and it is going to be pretty hard to build a Dragon deck without
them. Thunderbreak Regent is also the only reasonable Dragon that costs less than five mana, which is extremely important if we plan on having enough
dragons to trigger our Dragon effects.

So with eight of our dragons already chosen, our main goal is going to be to find the best shell for them.

Let’s look at the other good Dragons at the set and then the Dragon synergy cards, and see where it all takes us.

The remaining four Dragonlords all have their upsides and downsides, with my favorite being Dragonlord Ojutai. Being a 5/4 flyer for only five mana is
already pretty reasonable, and combining a free casting of Anticipate every time he hits along with built in protection provides us with a very powerful
finisher. While it will be hard to make Dragonlord Ojutai as good as it was in some of the Jeskai Ascendancy sideboards at the Season One Invitational, we
don’t need it to be an end-all be-all unstoppable finisher, just another solid threat.

While many people have complained that Dragonlord Kolaghan is simply just an easier to cast Rorix Bladewing with upside, those same people forget that
Rorix Bladewing was not a bad Magic card. While creatures have obviously gotten a lot better since Rorix was around, there is nothing embarrassing about
topping our curve off with Kolaghan.

Dragonlord Silumgar provides an extremely powerful effect, but it is unfortunately narrow in scope. Silumgar is amazing against some decks, but he’s pretty
bad against others and has the issue of just feeling too grandiose for his own good. The much cheaper and easier to cast Sower of Temptation has seen a ton
of play, as sometimes you don’t need all the extra power for the extra mana. We can see this same idea when we look at the underplayed Monastery Mentor
against the heavily played Legacy staple Young Pyromancer.

The non-Dragonlord that does interest me is Icefall Regent. While a bit weak to Lightning Strike effects, Icefall Regent is a fantastic tempo card. It can
come in and 187 any creature, and it will often be very awkward to remove. Icefall Regent definitely suffers at a very popular mana cost that it is hard to
overload on, but definitely do not sleep on its power level. If Icefall Regent was a four mana 3/3, I think it would be far and away one of the best cards
in the set.

Once we’ve chosen what Dragons we want, we need to know why we are playing them. We’re not trying to build a theme deck here, we are looking to
win. What is our payoff?

Wall of Omens is a fantastic Magic card, and getting to add flying to it only makes it better. Considering one of the major goals of our deck is likely
going to be to bridge the gap between our early turns and our Dragon lategame, Orator of Ojutai seems ideal.

Silumgar’s Scorn is also a fantastic Magic card, but it is much more difficult to use. Assembling UU on turn 2 is no easy task, and considering we are also
likely to need RR fairly early as well, with perhaps a third color thrown in, further complicates things. There’s no question that Silumgar’s Scorn is very
good, but it’s going to be hard to work in.

Foul-Tongue Invocation is also a powerful effect, but it’s fairly format dependent. If there are going to be a ton of Raise the Alarms and Hordeling
Outbursts floating around, it is pretty awful. If it is going to be hitting bigger threats, then it is definitely fine, but the issue is that you aren’t
going to need the four life that badly against the slower decks. It’s a roleplayer but not a huge draw.

An easy to cast Searing Blaze, on the other hand, is a huge draw. Searing Blaze is a phenomenal Magic card despite its extremely awkward manacost and
timing restrictions. In any deck that is the slightest bit aggressive, dealing your opponent an extra three damage is almost the same as drawing a card,
and being able to do so at such a manageable cost is awesome. The floor for Draconic Roar is completely reasonable as well, as Lightning Striking a
creature is fine. This is the best of the bunch, not close.

A 3/4 creature for only two mana is almost a Tarmogoyf-level deal, but again, like Silumgar’s Scorn, we have major mana issues. Assembling GG on turn 2 in
our base-red two or three-color deck is going to be difficult, and Elvish Warrior isn’t the best floor if we don’t have a Dragon. I wouldn’t be surprised
to see this card break out if someone can figure out how to make it work, but I don’t really want anything to do with it at the moment. 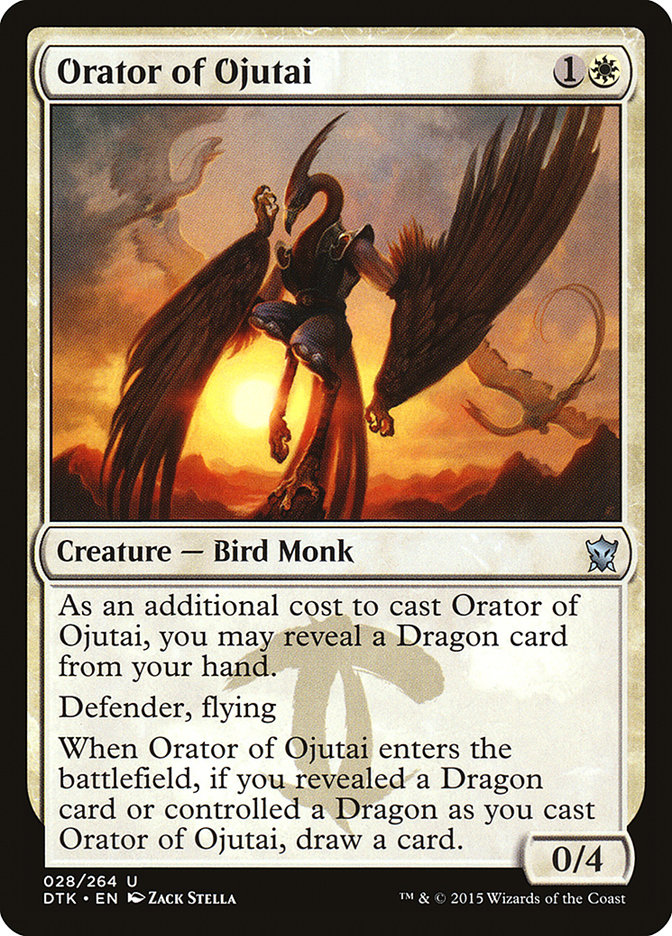 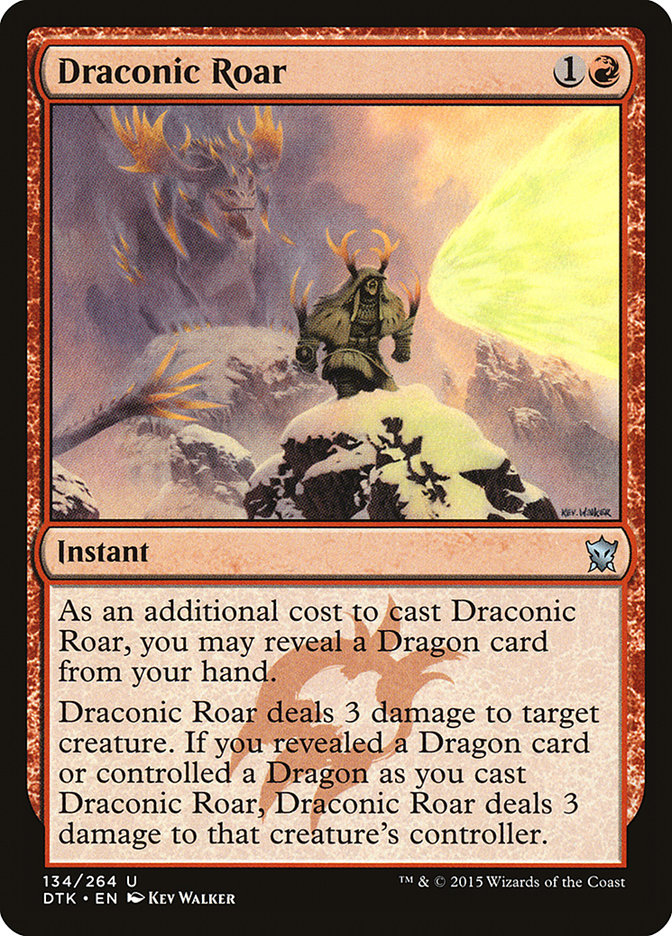 It seems pretty clear that Orator of Ojutai and Draconic Roar are far and away the best payoffs for playing Dragons, and so far our favorite Dragons fall
in those colors as well. As there is no R/W Dragon and we are going to need more than the eight-pack of Stormbreath Dragon and Thunderbreak Regent, we are
going to need to branch into another color. This leaves us with three options: Jesaki, Mardu, and Naya. Naya seems like it would just be a worse version of
CVM’s G/R deck, so let’s focus on Jeskai and Mardu.

First up is Jeskai. 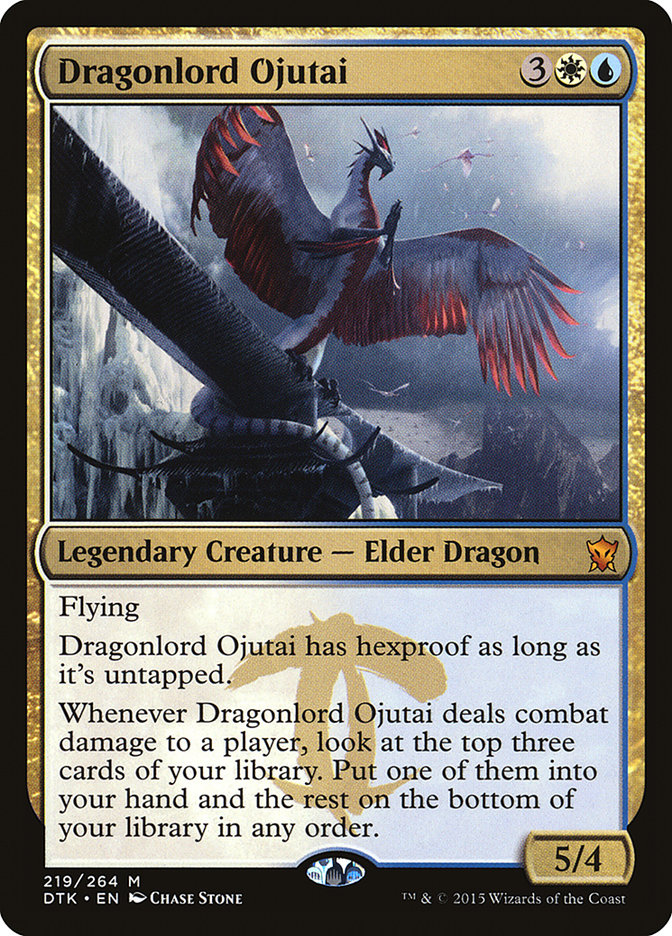 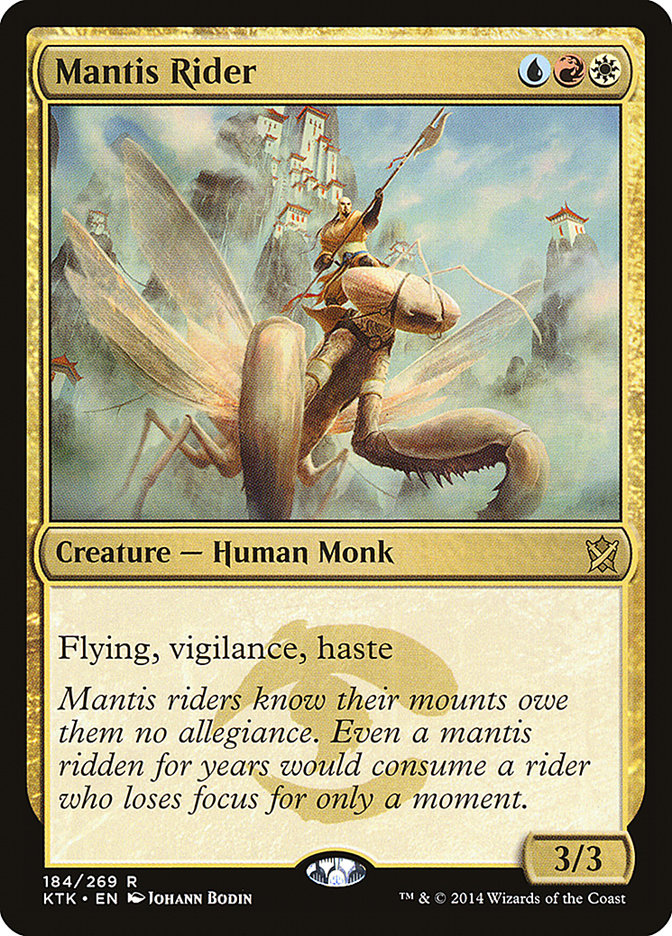 Jeskai adds Dragonlord Ojutai to our Dragon roster, and that gives us the powerful Valorous Stance to protect it. We also get an honorary Dragon in Mantis
Rider, which does an excellent job of filling out our curve with another powerful flying attacker.

The great part about adding Mantis Rider to the deck is how much incidental damage the deck deals. Mantis Rider almost always gets in for at least three
damage, as Stormbreath Dragon will often get in for at least four. If anyone wants to kill your Thunderbreak Regent they are going to be taking another
three, and they will also be taking random chip shots from our Draconic Roars. All these extra points of damage really add up and should put our opponents
into burn range fairly quickly.

The best part about the deck is that we get to play maindeck Anger of the Gods. With aggressive decks in Standard at an all time high, being able to
profitably play a maindeck sweeper in a deck that is still aggressive at its core is fantastic. Any aggressive deck is going to have trouble beating turn 2
Orator of Ojutai into turn 3 Anger of the Gods, and even though our Mantis Rider dies to the sweeper, it will still have gotten in for at least six damage,
which is totally fine. 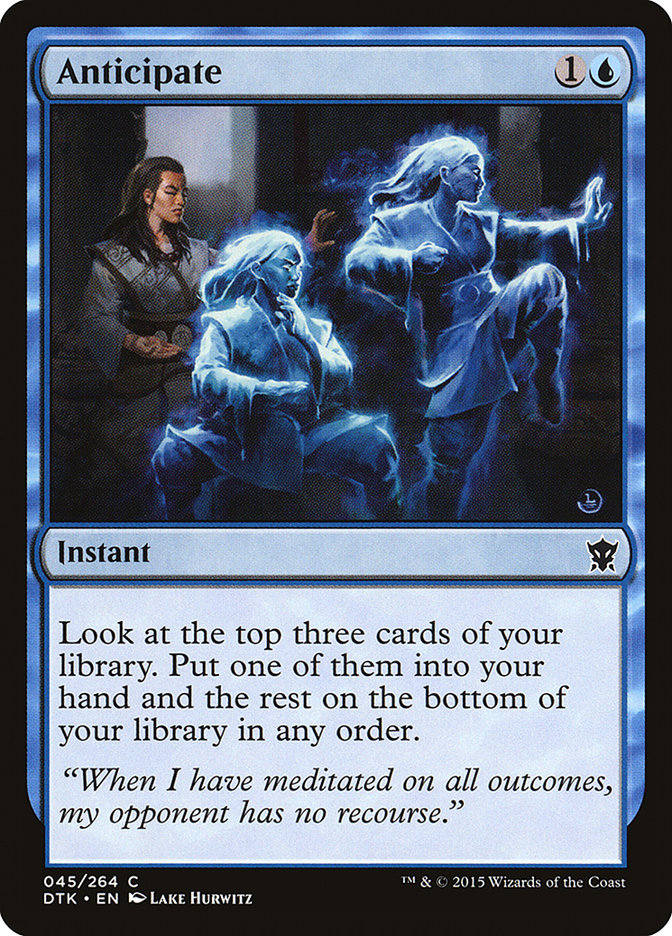 The deck is rounded out with some solid utility. Valorous Stance is a good removal spell, but more importantly it does an amazing job at protecting
Thunderbreak Regent and Dragonlord Ojutai. Thunderbreak will get another attack in and force them to take three more damage to target it again, while
Dragonlord Ojutai is already hard to kill and amazing if it ever hits.

Soulfire Grand Master might seem a bit odd, but it does a very good job at bridging the gap. It can come down early to attack and block to gain some life,
and it also will gain you a boatload of life off of Draconic Roar and, more importantly, Anger of the Gods. It is pretty unlikely your opponent will expect
a sweeper if they see Grand Master, and if they go two-drop into Hordeling Outburst and you cast Anger of the Gods as a follow up, you are going to gain
upwards of fifteen life. That’s a big swing at a very low cost.

Anticipate attempts to bring the whole deck together, helping to ensure you have a dragon if you need it for your triggers, or a land if you need that. It
also gives you something to do with your mana if you leave up removal and your opponent doesn’t present a good target. 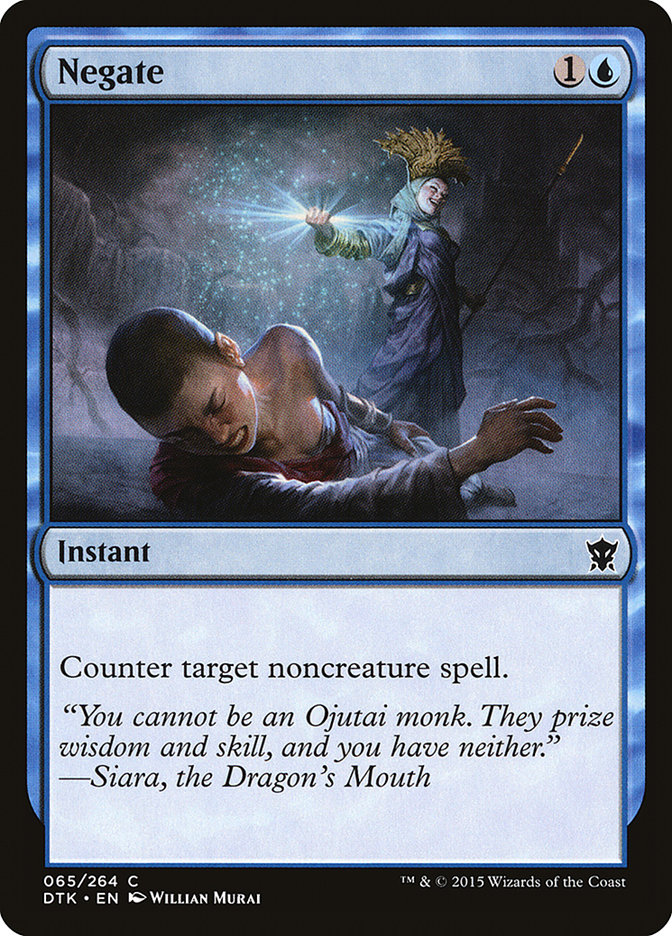 Of course, while Anger of the Gods is going to be amazing against a large portion of the field, it is going to be pretty bad against the larger midrange
decks and control decks.

So we give em the old juke.

Out go the sweepers and walls, and in come the fast attackers. Frost Walker hits extremely hard, and Flamewake Phoenix adds to our hasted flyer theme while
having a ton of ways to trigger ferocious.

Mantis Rider’s appeal definitely waxes and wanes with the number of Lightning Strikes/Bile Blights in the format, so lets look at a list that is almost
immune to such effects.

Our Mardu Dragon deck follows most of the same principles as the Jeskai one. 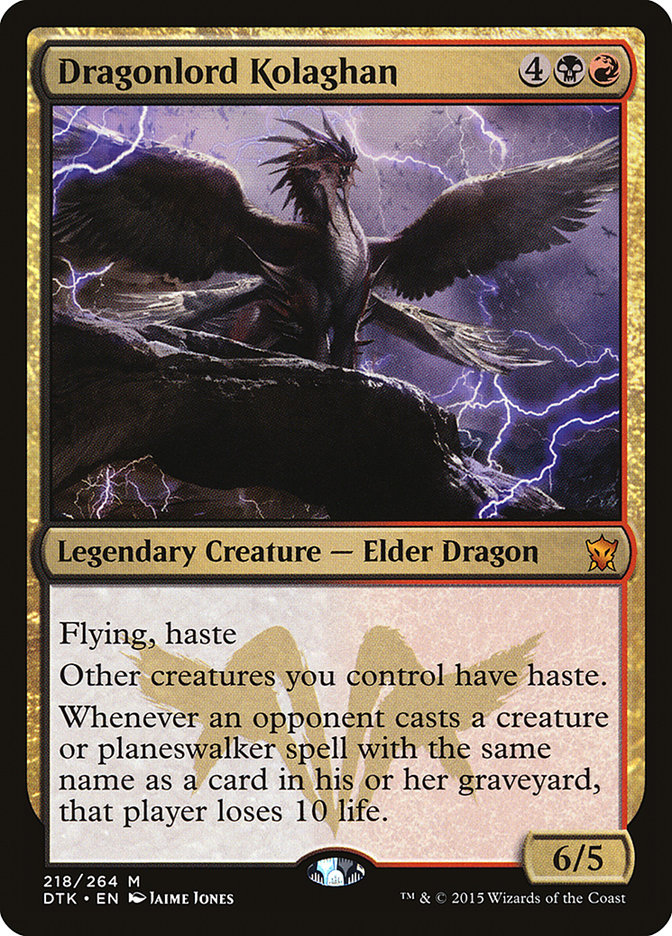 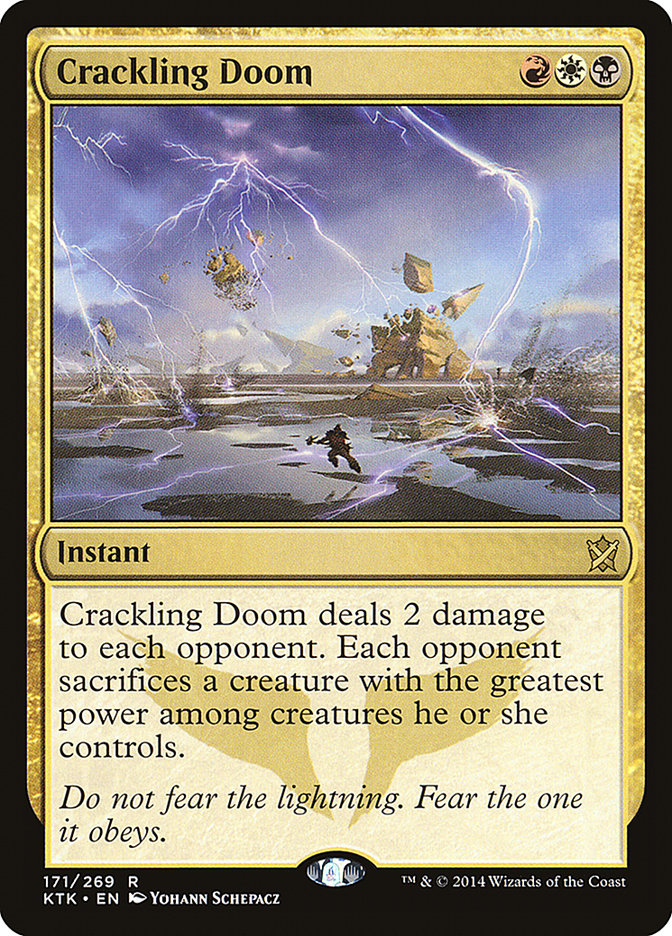 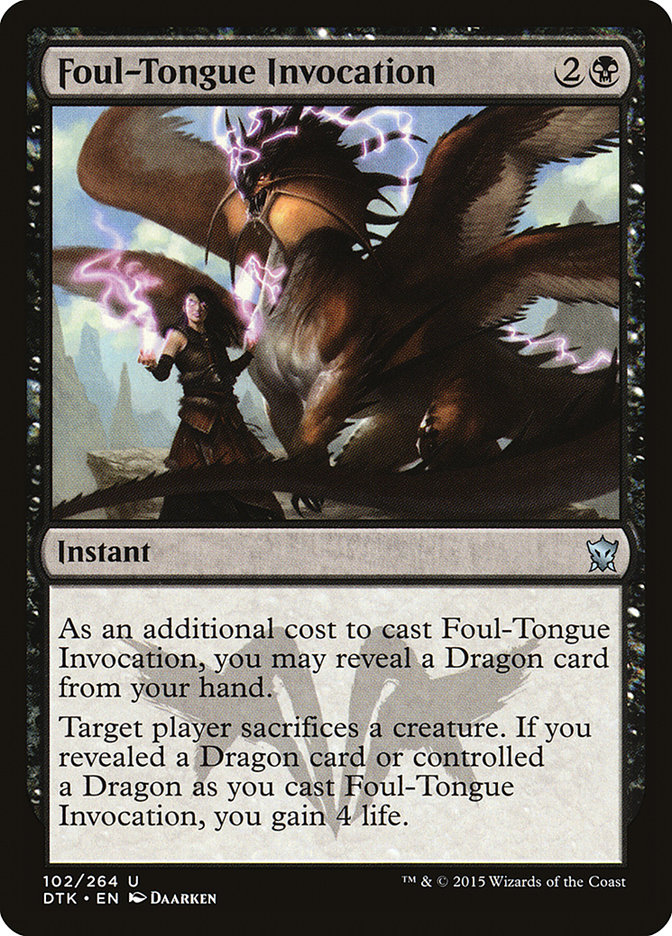 Our Dragonlord shifts to Dragonlord Kolaghan, and while not quite as good in a vacuum, it does kill much faster than Dragonlord Ojutai.

This is good because our early turns are going to be spent killing creatures and dealing more incidental damage. Crackling Doom is a fantastic card, and it
fills Mantis Rider’s role as a bridge to our Dragon endgame.

Again, we see Soulfire Grand Master around to gain some early life, and because lifegain is so much more important in this deck because of Read the Bones,
we also have Foul-Tongue Invocation at our disposal as well.

Again, like the Jeskai deck, we are going to need to have a juke sideboard when our Anger of the Gods are bad. While we are still going to employ Flamewake
Phoenix, we are going to use Thoughtseize to replace our lack of counterspells. A few extra Read the Bones will also help us grind them out. 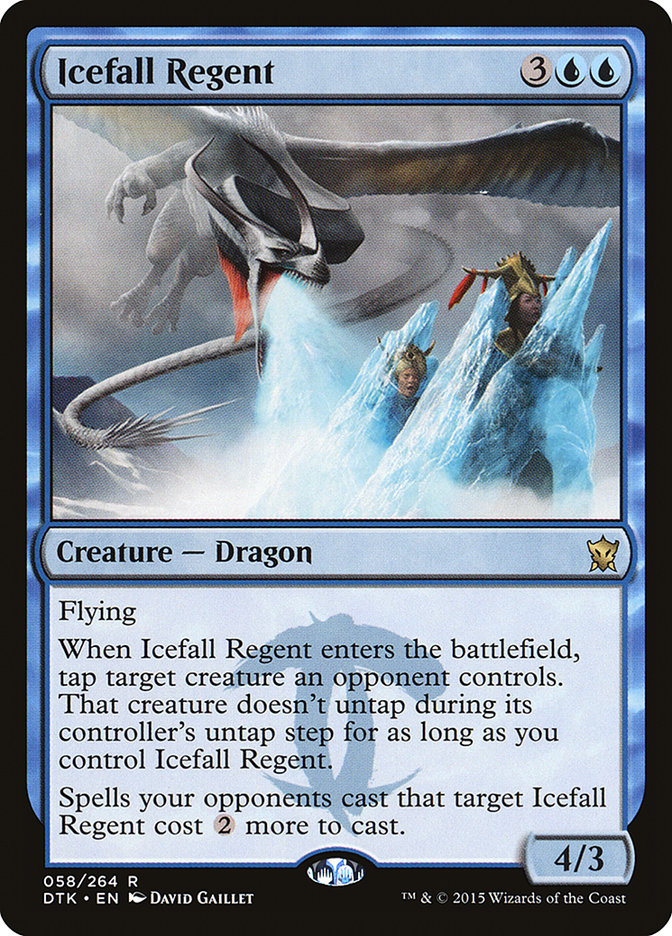 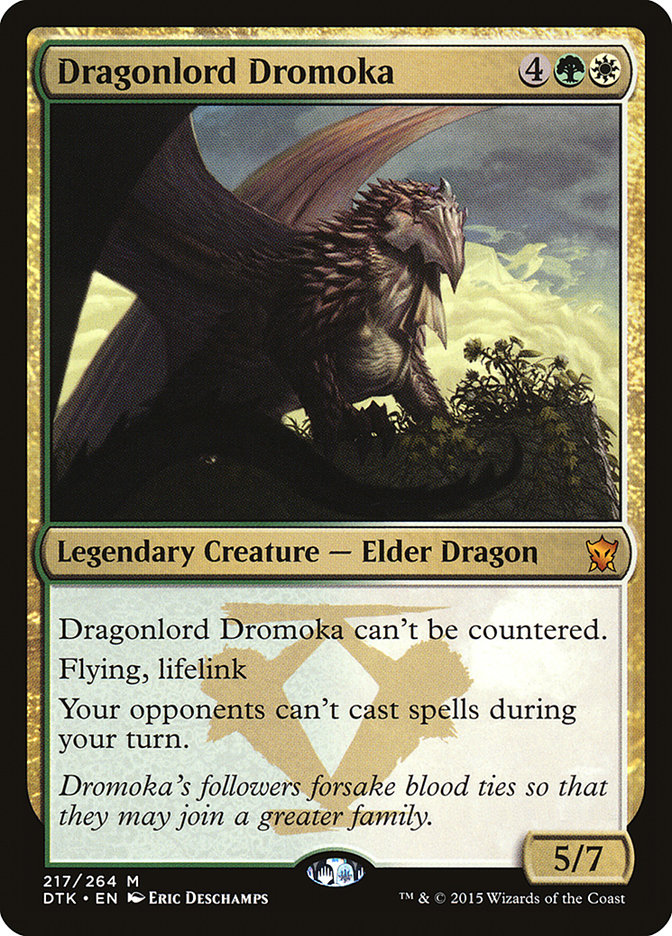 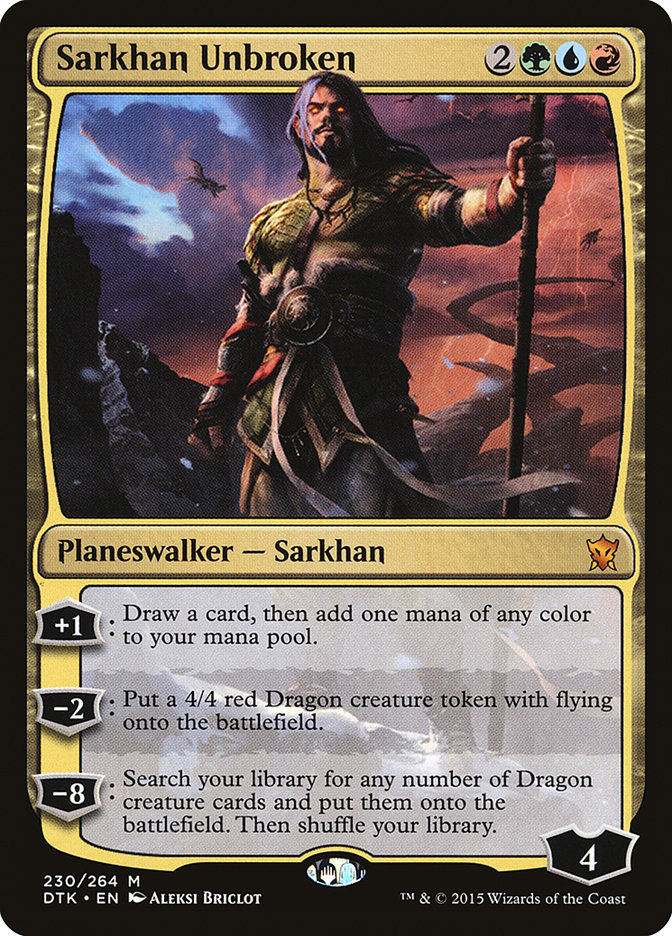 There are definitely other possible avenues to take, as there are certainly good Dragons we have not touched on yet. The format is young, and it remains to
be seen if Dragons will make a big splash in the format.

Will Dragons soar at the upcoming Pro Tour? Or will the usual array of Planeswalkers and Siege Rhinos reign supreme? We shall see.