The road to the SCG Players’ Championship is paved with Blood Baron of Vizkopas and Master of Waves (in the same deck), and I’m the only one who knows it.

Now, I’ve never been a great a deckbuilder (I saved that for the Chapins and Kiblers of the world) because when I see a card I like I want to play it (who doesn’t?) and most of the time all the cards I like end up in the same deck.

For example, Team Italia wasn’t a deck I just made on the spot; it was one that I thought about with my good friend Ben Lundquist for a while. We made a list of all the red, white, and black cards I liked, and then that became the deck. When I won Grand Prix Philadelphia, my deck pretty much consisted of all the green, black, and white cards I liked, including one of my favorite cards of all time: 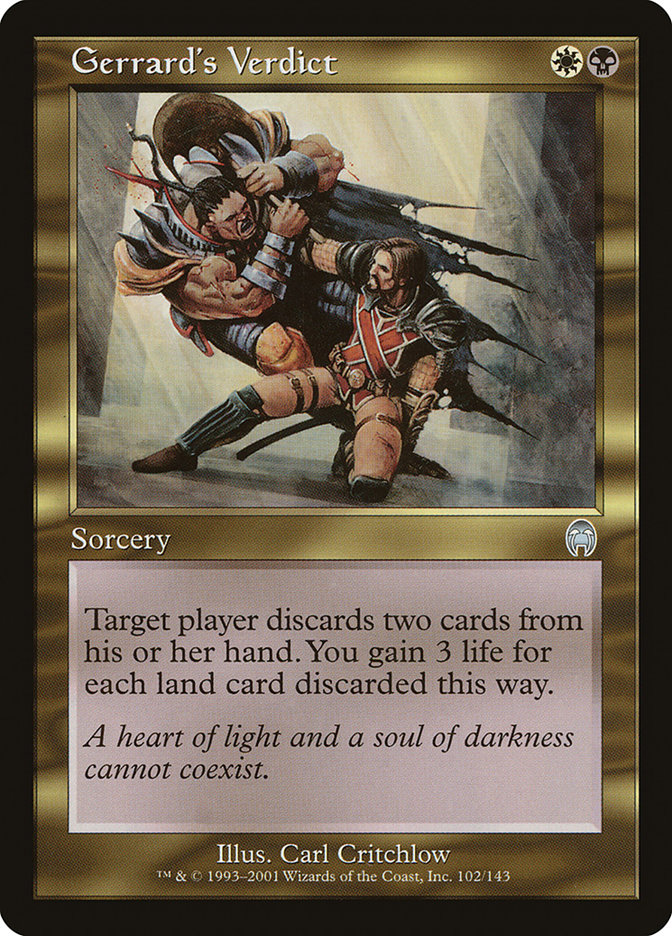 So I had this idea to work on an Esper Devotion deck with all the cards I wanted to play, and I ended up with the following.

I know what you might be thinking because let’s face it—at first glance the deck seems all over the place. So take a few minutes and watch this deck tech so you can learn more about Esper Devotion and get a better feel for it.

One of the main strengths of the deck is its ability to attack from many different angles. You’re able to attack their hand with Thoughtseize, their creatures and planeswalkers with Detention Sphere, and their life total with Blood Baron of Vizkopa and Pack Rat, and you even get to use their own cards against them with Nightveil Specter; Ashiok, Nightmare Weaver; and Domestication.

As I packed up my deck and hit the road to the Open Series in Columbus a few weeks ago, I took a close look at the Leaderboard for the Players’ Championship. William Jensen was way out in front, but I realized that all it would take is a few good finishes from anyone in the Top 16 to shake things up. Thanks to some solid finishes last year and attending some IQs this year, I found myself in the Top 16 on the Leaderboard and was hoping to build on that.

On the way to Columbus, I went over how I would sideboard with this deck, the matchups I thought were weak and strong, and my overall plan against the most popular decks (Mono-Black Devotion and Mono-Blue Devotion). I felt confident and was ready to play.

However, the tournament started off poorly for me by losing the first round to Mono-Black Devotion. I managed to stay focused though and went on to win eight straight matches in a row, defeating a wide range of decks along the way.

In the last round (as you might have suspected), my tiebreakers were miserable, and I was unable to draw into the Top 8. I was forced to play it out against Mono-Blue Devotion, which is normally a good matchup, but I ended up throwing away the match and finished 8-2, which was good for a Top 32 finish.

Was I disappointed? Yes and no. Sure, I would have liked to make the Top 8, but sometimes you have to be willing to take your losses and learn from your mistakes.

The next day it was time to play one of my favorite formats: Legacy. I ended up playing almost the same deck I played a month or so ago at The Tales of Adventure’s 40 dual/40 fetch Legacy event, which gathered nearly 200 players. I finished in second place, losing a close match in a three-game finals against Esper Deathblade. I posted a picture of the deck on Twitter, but here’s the exact decklist:

As the theme continues of how I go about building most of my decks, you can probably tell it’s basically all of the blue, green, and black cards I like in Legacy meshed together. However, I can’t take much of the credit on this one. If you take a close look at the deck, it’s very similar to the BUG deck Reid Duke used to win an SCG Invitational a while back. For reference, here’s Reid’s list:

You might also notice that the deck attacks from many different angles. With a solid sideboard of Surgical Extractions, Disfigures, and Spell Pierces, you have game versus every deck in the format. The deck performed well for me, but I managed only a 6-3 record, which was good for Top 64 but not what I was aiming for. After everything was said and done, I left in Columbus with six more Open Series Points and lots of fun memories.

The following week was the Open Series in Baltimore, and besides a few minor changes, I ran the same two decks. I was once again excited for Standard, as it was the last major tournament before Born of Gods and I felt very confident my card choices.

After a strong 4-0 start in Standard, things fell apart for me, and I again finished with an 8-2 record. With a disappointing 6-3 record in Legacy on Sunday, I walked away with another six Open Series Points. With 27 Open Series Points in this year’s race and 95 for Season One, I have my work cut out for me. I’ll need to keep working on my game and hit up as many SCG Invitational Qualifiers and Open Series events that I can.

Looking forward to Born of Gods, it seems that it will have a big impact on Standard but not so much on Legacy. Because of that, I think it makes the most sense to focus more on Standard for the time being. Besides, I’m fairly comfortable with BUG in Legacy and have decided that I’m sticking with it for the Open Series in New Jersey. As of today, I will be shifting the focus of the type of BUG deck I play to a BUG Delver list instead, as it seems to have had more success recently.

With Legacy pretty much out of the way barring a few card changes and some adjusting of the sideboard, I want to spend the next week focusing on Standard.

With Born of Gods, B/R and Jund both stand out to me. Lately I’ve been working with a few friends on the format, and I want to discuss one deck before going back to Esper Devotion. Here is a rough sketch of Jund Midrange my friend Eli Kassis has been testing in our group.

Jund Midrange interests me a lot because it’s my style of deck. I truly love the fact that Hunter’s Prowess has a home; in this deck it’s able to provide a great card draw engine that’s been lacking since the rotation of Garruk, Primal Hunter. Sure, Underworld Connections and Read the Bones have been in Jund for a while now, but being able to draw a massive amount of cards in one shot is super powerful for the deck. Outside of Hunter’s Prowess being a great addition to the deck, you also get better mana depending on how you want to build your mana base (i.e. how many scry lands you want compared to curve consistency) and access to Xenagos, God of Revels, which is definitely a great addition to the threat density of the deck.

A couple of months ago Matt Costa attacked the metagame and took down an Open with Jund. Is the format defined enough for Jund to be really good? Even though it’s a new format because of Born of the Gods, I think the answer just might be yes.

Yes, the format is new, but there is a very good chance that the metagame at the first Open in Nashville and then the next one in New Jersey will be predictable. Mono-Black Devotion and Mono-Blue Devotion will still be all over along with Sphinx’s Revelation decks, R/W Devotion and G/W Aggro. Other decks that will most likely gain more popularity are B/R, B/R/W, and Jund (due to new scry lands and the new Gods). I will be taking a close look at the coverage this Saturday and then deciding what I want to bring to the IQ I’m playing in on Sunday and adjust accordingly for the Open Somerset. As of now, I’m split between my Esper deck and Eli’s Jund deck with maybe a few changes. Let’s take a look at the updated Esper Devotion list.

Again, all the changes are still in the works, and some new cards might be added to the sideboard or even the maindeck. Drown in Sorrow might be a good fit, but is Supreme Verdict just better? Can Pain Seer make his way into the deck? Bile Blight is great, but considering it costs BB, is Doom Blade, Ultimate Price, and/or Devour Flesh just better? These are some questions I’m still not entirely sure about. When a new set hits the market, everything is pretty much uncertain, but I’m sure this is something you guys understand and are trying to figure out as well!

I love working with and getting feedback from players, so here are a few questions to open up a discussion. After all, the goal is to try to figure out the format and make Esper Devotion a real thing. And doing that alone is a rather difficult task!

1) Is Phenax, God of Deception being overlooked and have a home somewhere?

2) What are your thoughts on the number of Mutavaults, basic lands, and scry lands in Esper Devotion? This is something I’ve thought about for a while and am still unsure if I’ve figured out.

3) Should I be running one or two copies of Revoke Existence in the sideboard to deal with all the new Gods? I’m thinking yes, but what would I cut for it?