Lost in all the well-deserved hubbub over Grand Prix Richmond is the fact that we’re quickly approaching the end of Season One for the StarCityGames.com Players’ Championship. For those of you out of the loop, one of the sixteen invites to the #SCGPC will be locked at the end of the first Invitational in Charlotte (this invite is determined by a combination of 2013 and 2014 Open Series performance). Heading into the home stretch, the top of the leaderboard is as follows: 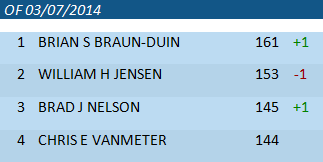 Brian Braun-Duin finally overtook William Jensen last week, who put together such an impressive run of Open Series performances in 2013 that the Season One invite seemed all but locked up. But Huey hasn’t been attending events thus far, and the other three names you see on the list have, so now we have a real race heading into the final events of Season One. Since the next two weeks are SCG’s first trip of the year to the West Coast with events in Seattle and Los Angeles, I’m curious to see if any of these players make the trip out to try to snag the last few points.

Also of interest is how the Standard format is developing. It takes time for players to wrap their heads around new content, and nothing in Born of the Gods is on par with Mutavault, Thoughtseize, or Sphinx’s Revelation, meaning that the metagame was likely to be slow out of the gates to take on its own shape. This was highlighted by Eric Gray’s win with a stock list of Mono-Blue Devotion in Nashville, the first Standard Open where Born of the Gods was legal. Slowly but surely we’ve seen new decks take their spots in the metagame, though most of the decks are adaptations on old strategies rather than new decks in their own right.

The source for most of the early metagame churn has been G/R Monsters (and its counterpart Jund Monsters). Courser of Kruphix injected a lot of power and synergy into the deck, and it was a dominant force both in Nashville and especially in St. Louis. Though people were initially slow to understand the extent of the threat and how to adapt their deck, everyone is on board now, and we’ve seen a multitude of cascading effects on the Standard metagame.

In short, we are in a very midrangey world right now. Many decks spend their first few turns setting up shop to try to deploy powerful threats, and the key to the Monsters mirror is either playing something of substance first or having some cheap Terror to break serve. So what decks are prone to break out in this metagame? Usually when the metagame gets to this sort of place, I advocate going to opposite ends of the spectrum, as these midrange decks often have a bunch of cards that are poorly suited to such fights.

I really like U/W Control in the metagame right now, and I’m surprised at its low amount of representation. Esper has become the default control deck of choice right now; I understand the instinct of adding black removal to a control deck to fight green creatures, but I don’t think the splash is required. I think G/R Monsters is just as beatable with counterspells as it is with removal assuming you hit your land drops and enough of them come into play untapped, and I really value the latter aspect in general.

I’m also pretty surprised with how little maindeck play Essence Scatter and Negate receive given that nearly every popular deck has some mixture of critical creatures and spells (most often planeswalkers, sometimes Underworld Connections) and being able to break serve against them reliably and inexpensively is very important. They play much better with things that are asking you to spend mana on your own turn as well like Divination and Jace, Architect of Thought.

I went ahead and added the 27th land since I see this deck losing more to missing its fourth or fifth land drop than to anything the opponent happens to be casting. I’m not positive this is the absolute best construction of U/W Control, but I think a list with some mixture of Essence Scatter and Negate main could be well suited for the current field of popular decks.

The above deck is one way to capitalize on slow cumbersome threats. The other way?

I’m really excited by the potential for this list right now. The important inclusion is Rubblebelt Maaka since it lines up so well against Sylvan Caryatid and Courser of Kruphix, the best cards Monsters has against you. The rest of that deck is slow threats and comes into play tapped lands, and the remaining base of this deck is very well equipped to beat that sort of thing.

There are other positive things going on for this deck in the metagame—the total absence of Pharika’s Cure from Mono-Black Devotion; the inclusion of white (and in many cases the removal of Rapid Hybridization) from Mono-Blue Devotion; Lifebane Zombie running around all over the place; Esper being more popular than U/W Control; very few Precinct Captain, Nightveil Specter, and Voices of Resurgence—and this deck was semi-reasonable in much more hostile waters a few months back.

Ash Zealot might be too greedy and could easily be replaced by Gorehouse Chainwalker (giving the deck another Burning-Tree Emissary play), but Chainwalker felt poor to me in previous iterations of similar lists. It’s even possible that a mixture of the two is correct. In any event, I think an aggressive red deck with Rubblebelt Maaka (and/or Titan’s Strength) is well positioned to take advantage of G/R and Jund Monsters as well as the newer of black and blue devotion lists.

As we enter the final leg of Season One, the Standard metagame seems pretty firmed up, with G/R and Jund Monsters still the clear standouts early with Born of the Gods. But these decks are pushing themselves very far into the middle to try to beat one another, and I strongly suspect that a deck on either end of the spectrum (a ponderous control deck or a linear attacking strategy) could prey upon decks that are conceding a lot of early game development in hopes of making up for it with powerful expensive threats. Be sure to tune into the SCG Open Series in Seattle and Los Angeles the next two weekends to find out where Standard is heading as we make our way toward the Invitational in Charlotte.